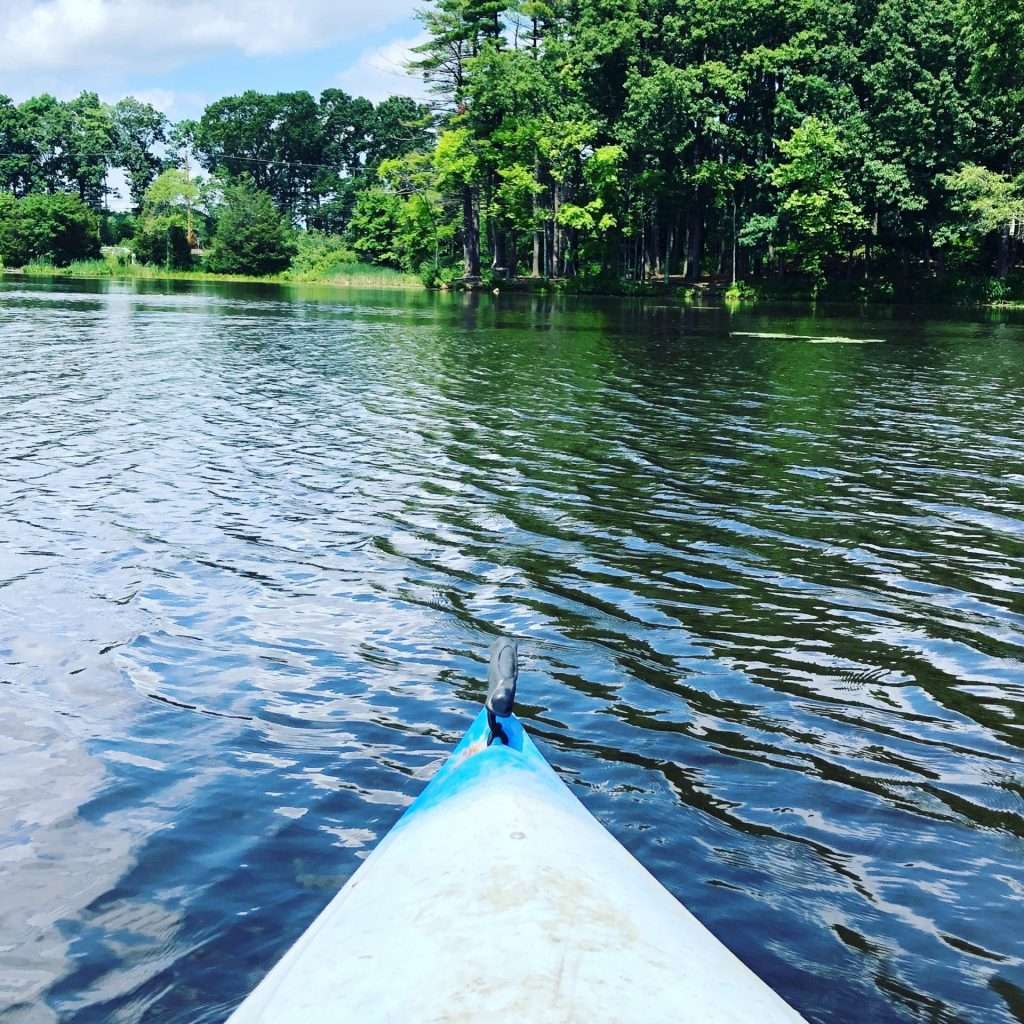 The first trick to kayaking at Natick’s Fisk Pond is figuring out where to drop in your watercraft.

I did a bit of reconnaissance and wound up rejecting a little clear-out and path down to the pond near the intersection of Rte. 135 and Speen Street kind of across from CVS. It could work, if you have better balance than I do.

I settled instead on a clearing a couple hundred feet into the Henry Wilson Trail off of Rte. 135. To get there, I parked in the Middlesex Path lot, near the new dog park, on the other side of Rte. 135. So I then had to lug my kayak across the Rte. 135 crosswalk, which proved simpler than I though it would…a kind driver stopped to let me pass.

Are there are public access points I overlooked? natickreport@gmail.com

I looked around for signs just to make sure I wasn’t going to pollute an off-limits reservoir (I’d already looked on the town website but didn’t find much on Fisk Pond at all). Once satisfied I wasn’t going to get in trouble,  it was a snap to slide the kayak into shallow water and I was on my way onto Fisk Pond.

As an aside, the body of water is referred to as Fiske Pond on the state pond map and some past Natick annual reports. (Apparently there’s a bit of controversy over the name.) Fisk Pond is an extension of Lake Cochituate and part of the Sudbury-Assabet-Concord watershed.

My inspiration for the paddle was actually to go from Fisk Pond to Lake Cochituate, which sits just across Rte. 135 (See also: “Kayaking Lake Cochituate in (mostly) Natick”). For some reason I had it in my head that I’d be able to go from one to the other via a culvert under the road. But as I quickly discovered, there’s no tunnel there, it’s dammed off in that area where the old fishing pier stood.

That was my second mistake. Turns out that wasn’t even technically a fishing pier, but rather remnants of a maintenance access platform for the horseshoe dam at that point of the Pond, according to helpful souls on a local Facebook page. Not to say it wasn’t extensively used for fishing over the years, and even is still, with nimble anglers skirting the fencing around the dilapidated wooden structure. 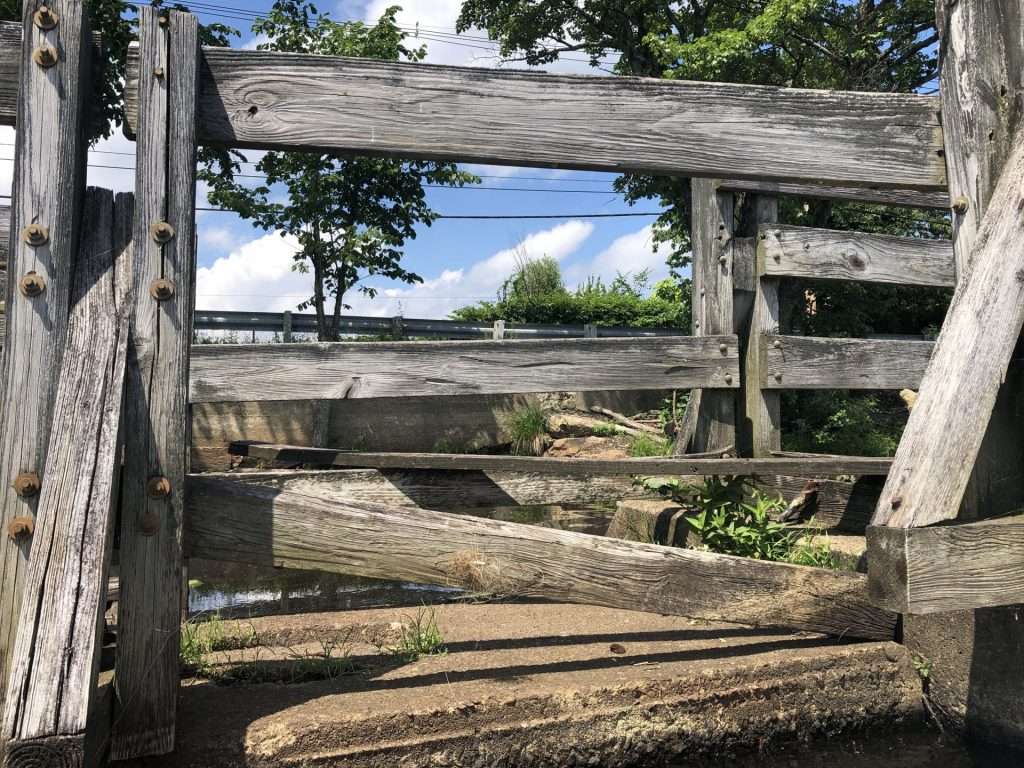 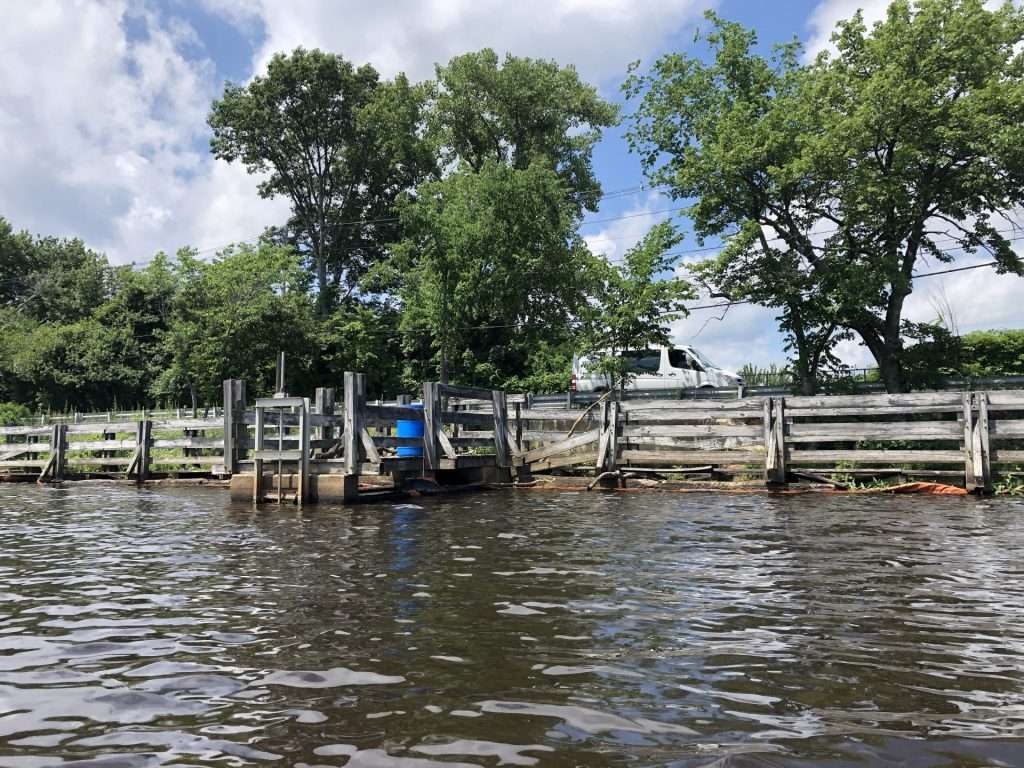 That left me with spinning around the pond for about 45 minutes, with only a couple of fishermen standing on the perimeter to keep me company. Fisk Pond is surrounded by trees and edges along Dell Park Cemetery, Rte. 135, and Speen Street, with a few nooks and crannies to explore. I did not venture toward Course Brook past Pond Street, so not sure if that is navigable.

But I tried to keep my focus on what was around me on the pond. 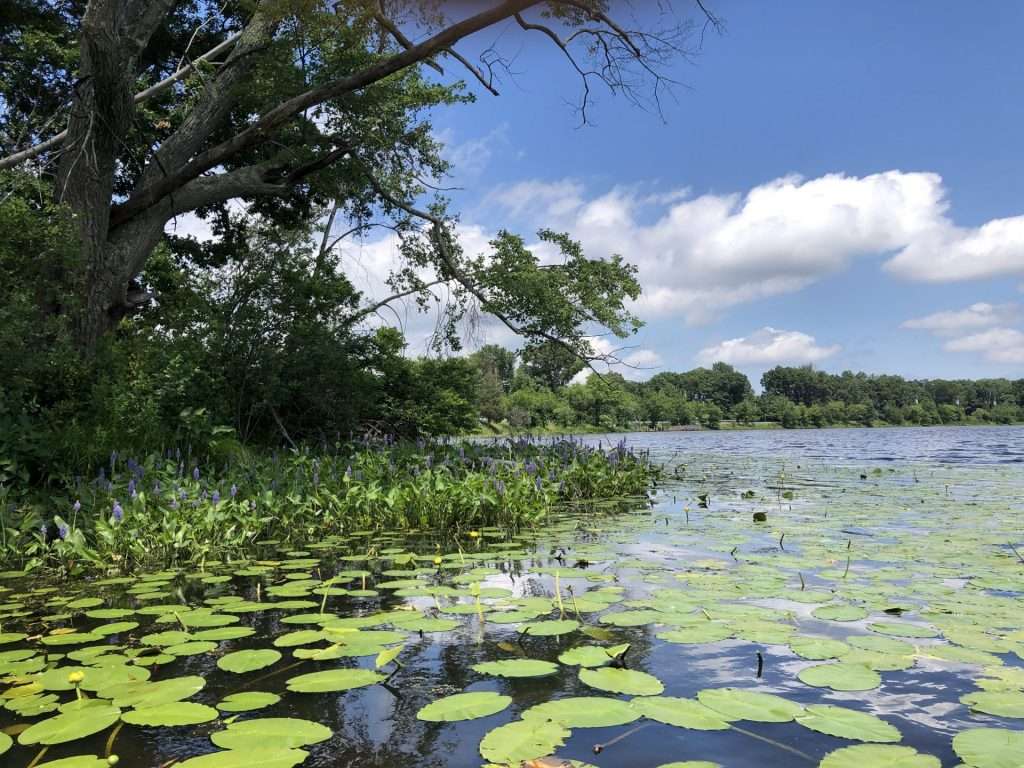 Lily pads and native purple wildflowers called Pickerelweed cover large sections of the water’s edge. The 67-acre pond not long ago was overrun by water chestnut,  boasts a company that handled the initial cleanup.

The day I kayaked there it teemed with skittish painted turtles, quick to plunk off their logs whenever I came near. A few waterfowl swam around, one making quite a ruckus by splashing dozens of feet at a time. While I didn’t bring a fishing rod, I could see plenty of fish through the water, a translucent brown close up.

Beavers have built an impressive lodge, too.

Fisk Pond was definitely worth a look, but it’s onward to the much larger Lake Cochituate for my next outing.

(Thank you readers for setting me straight on a few facts in this post (re: native vs. invasives, beaver lodge vs. dam, etc. Love the crowdsourcing!)