Every year around Memorial Day I lug my tree philodendron from its sunny corner indoors to its summer spa location outside my front door. There, the huge houseplant enjoys a three-month revel of fresh air, sunlight, daily watering, and the attention of passers-by.

Phil looks fabulous now, but only a few short years ago he was the saddest thing you ever did see. A rescue plant, I scooped him up from a “take me, I’m yours” table where he had been left for practically dead. Poor Phil had been abandoned by someone who was at least kind enough to keep him out of the trash. He was a pathetic sight, indeed, living in squalor in a cracked plastic pot with no drainage holes. The whole of Phil was made up of just four ratty leaves and a hangdog posture, yet he possessed a tenacious will to live. In fact, with just a little care Phil has thrived and is now my most indispensable house plant. 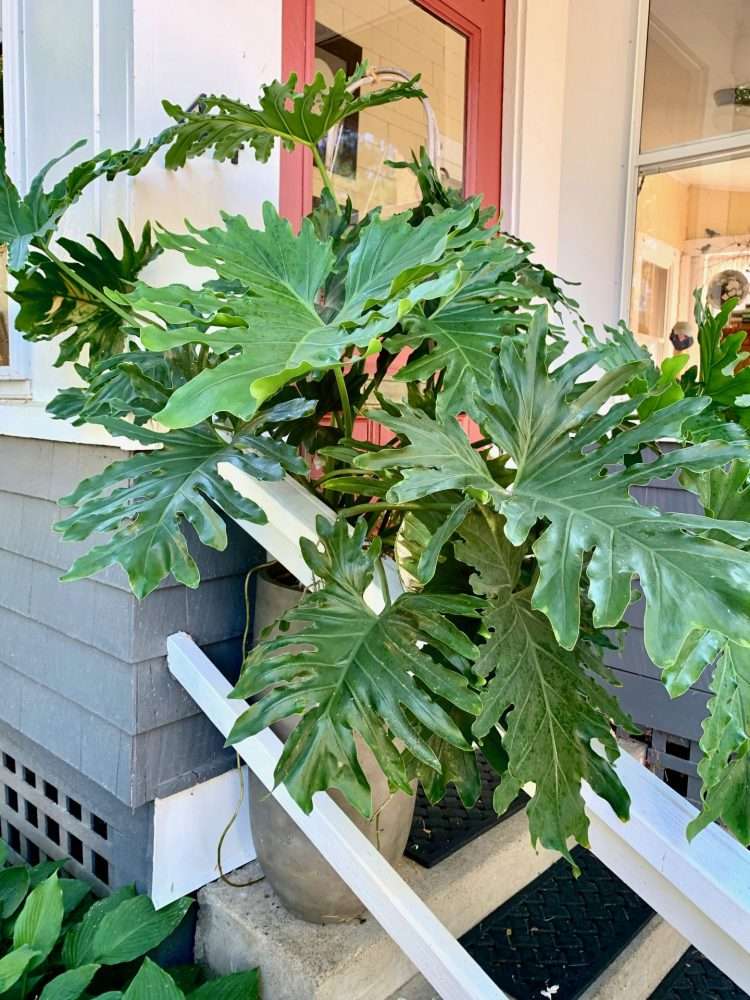 Unlike some plants that complain when you move them from outside to inside and vice versa, Phil lives happily wherever he lands. Weekly watering when inside (daily when outside), a corner that gets plenty of bright, indirect sunlight, and he’s good to go. And after his monthly treat of fertilizer he generally goes gangbusters, sending up at least one new leaf shoot when indoors, and upping that to several new leaf shoots per month when outdoors. I just mix one tablespoon of Miracle Grow into one gallon of water, decant that mixture into a wine bottle (the gallon milk container is so unwieldy when watering plants) and do the usual watering. That’s about a quarter of a wine bottle of fertilizer/water mix when Phil is inside, and about a half bottle when he’s outside and living it up a bit because, well, summer. Any more than that and Phil gets tipsy, so I’m sure not to let this monthly happy hour get out of hand. As for straight water, he gets as much of that as he wants. Translation: about 1/4 of a wine bottle of water 1x/week when inside, and about 1/2 wine bottle of water per day when outside.

Over the years I’ve repotted Phil a couple of times, most recently last May into his current handsome bullet pot sourced from Home Depot. Phil and I dig the pot’s mid-century modern lines and appreciate the way it harmonizes with our 150-year old cottage. Also, I feel very smug when I wander the pricey garden stores and see a pot just like Phil’s for triple what good old Home Depot thought was fair.

Hard to believe, but in just a few weeks it will be Labor Day and thus time to move Phil inside until next spring. Even though he’s not the fussy type, everyone deserves to be eased gently out of summer. For a couple of weeks I bring him onto the front porch, an uninsulated and cheerful room filled with birds nests, board games, and disreputable running shoes. Part mudroom, part pandemic office space, the porch is a pretty good spot for a big old houseplant to get used to the idea of change. After that Phil will probably decamp to the main bedroom, like last year. Or maybe he’ll be open to giving the family room a try this year. We’ll see.

For now, Phil and I will hold onto this good summer living. Me, watering Phil from a wine bottle, causing neighborhood talk. Phil, throwing green shoots up into the air like he just doesn’t care. Both of us living life without an abundance of caution, here at the little cottage that has enough room for a big plant.