Third-generation Natickites Jess and TJ Dillen don’t scare easily. In fact, the only thing that can make the siblings tremble is rain around Halloween. The two have a sizable investment to protect in the form of over 100 zombies, skeletons, ghosts, and ax murderers that hang out on the front lawn of their 118 Pond Street home every year.

Apparently it’s a nightmare when the scream team of life-sized figurines gets wet. But not even rain will stop Jess and TJ from sharing their passion for Halloween with the community. If the weather doesn’t cooperate, the two just bring their display of scary-but-sensitive souls inside, and then set it back up later for the enjoyment (or to the horror) of all.

TJ, a power company worker with a side gig as a picker, is constantly adding to the collection. What’s in the front yard on any given Halloween is only the tip of the iceberg. “We have so many there isn’t enough room in the front yard to put them all out,” he says. “We usually have gargoyles on the roof, but we just got the roof replaced. The roofers said don’t put anything up there because of the warranty.” Sorry, gargoyles. Maybe next year.

No matter, between Beetlejuice, the creepy conjoined twins, the scary clowns (you knew there had to be scary clowns)—and the smoke machine and projector show to lend atmosphere to the horrifying scene—you won’t even notice that pristine roof. Or the freshly mulched landscaping. Or the overall prettiness of the three-story home. The Addams Family mansion it isn’t. You’re at 118 Pond Street Manor, and they keep up appearances here.

TJ also keeps up an active search for all things hideous. He most recently bought a collection in New Hampshire from a former World Wrestling Foundation grappler. Everyone in the home clean-out and junk removal services field knows TJ will pay top dollar for the right piece to round out his collection of the macabre, the grisly, and the gruesome. The emails about blood and gore for sale don’t stop. (mrtman64@gmail.com, if you want to do business.)

The Natick High School grads seem to be something of an inspiration in the neighborhood. “A boy across the street buys stuff we sell at our yard sales and has his own display now. I don’t know if you noticed on the way here, but the whole street is decorated,” TJ points out.

“Over the past few years a lot more people on Pond Street have been getting into it. I think it’s great,” says Jess, a teacher in a childcare center.

About 1,000 trick-or-treaters each year agree. Jess and TJ aren’t sure what numbers to expect this year, but they’ll be ready. “We’re designing a candy chute,” Jess says. “Everything else is canceled. We didn’t want to cancel.”

The two put a lot of thought into how they would handle designing the display during a time of pandemic. They wear masks and keep socially distant on their jobs and in their everyday interactions. They decided there was no reason for their monsters to do the same. “We decided on no quarantine stuff,” Jess says. “Our display is about forgetting all that stuff and just having fun.”

“We love doing this,” TJ says. “We talk about it 9 months of the year. We take a little break from it after Halloween. But it’s a passion.”

“We like to give back to Natick, ” Jess says. “It’s just our way of doing that.” 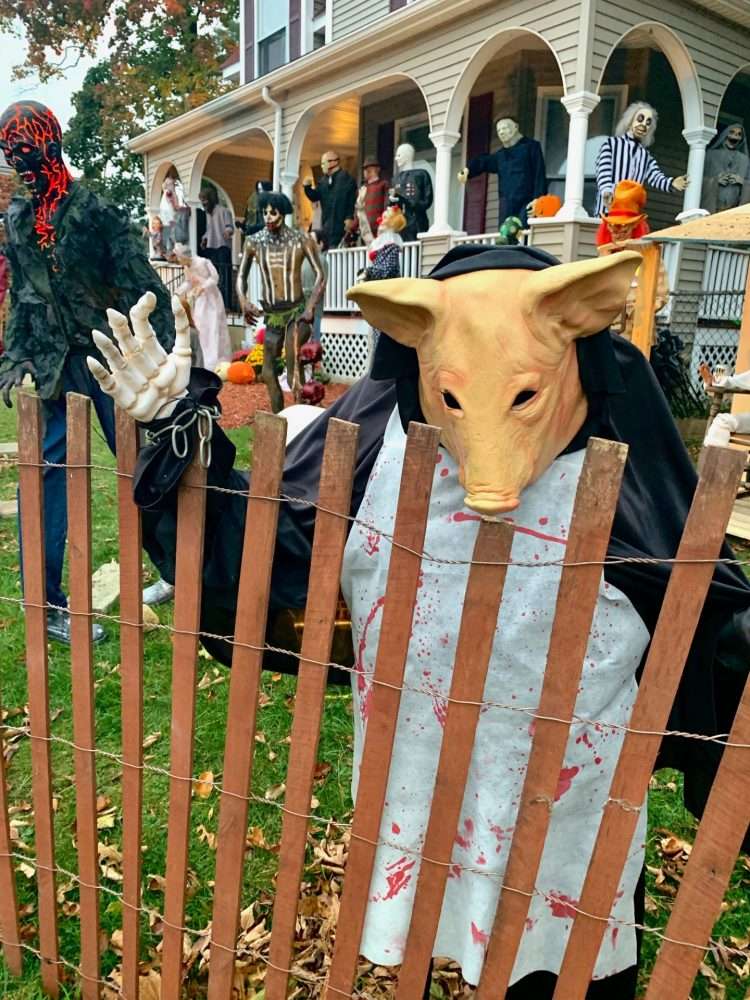 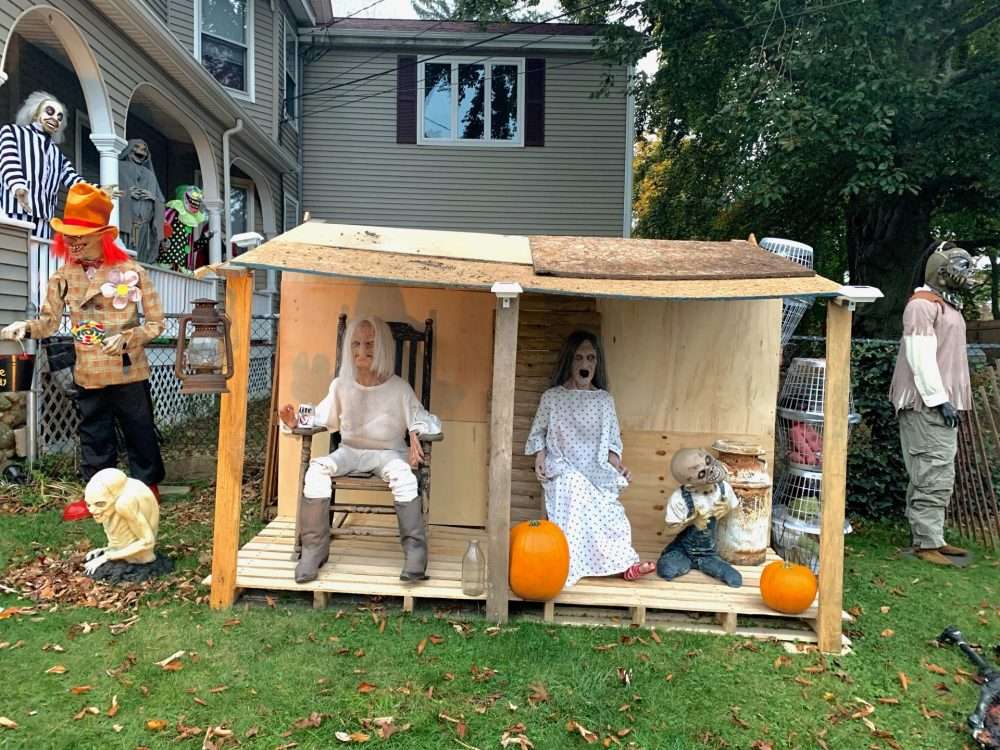