“When you love something, you don’t look at your watch or the clock. You don’t think about the time. When you love something you just do it,” said Karen Coffman as we looked out at her South Natick garden all dressed up for fall in purples, yellows, oranges, reds, and browns. “I put in the time in the garden, and I love it. I also have really good help. My husband is strong, built like an offensive lineman, and is willing. We’ve lived here since 1995, and I’ve been gardening the whole time.”

Karen hasn’t always had her dream garden. For 11 years before she landed in South Natick, she and her husband called Wellesley home. She liked the town, but found the gardening an exercise in frustration. “There were just too many trees shading my property,” she said. “I couldn’t get the six hours of sun per day that I needed without chopping down my neighbor’s trees. I told Lonnie I needed more sun for a garden.”

She found the perfect property that abutted acres and acres of apple orchards and, most importantly, it was a place where she could get direct sun for the necessary 6 – 8 hours per day. Still, the 1⅓-acre space wasn’t exactly ready for its close-up. “When we got here we cut down 37 swamp maples,” Karen said.

With the shade eliminated, the sun poured onto the lot. That was one box checked.

So she had truckloads of the offending dirt hauled away. “Then I ordered the best loam and filled the yard back in. My budget was 75% spent and I hadn’t bought a single plant. But I had to do it. The land tells you what to do if you pay attention.”

Once the dirt deed was done, another box was checked off. Karen was just a couple more steps away from realizing her dream. 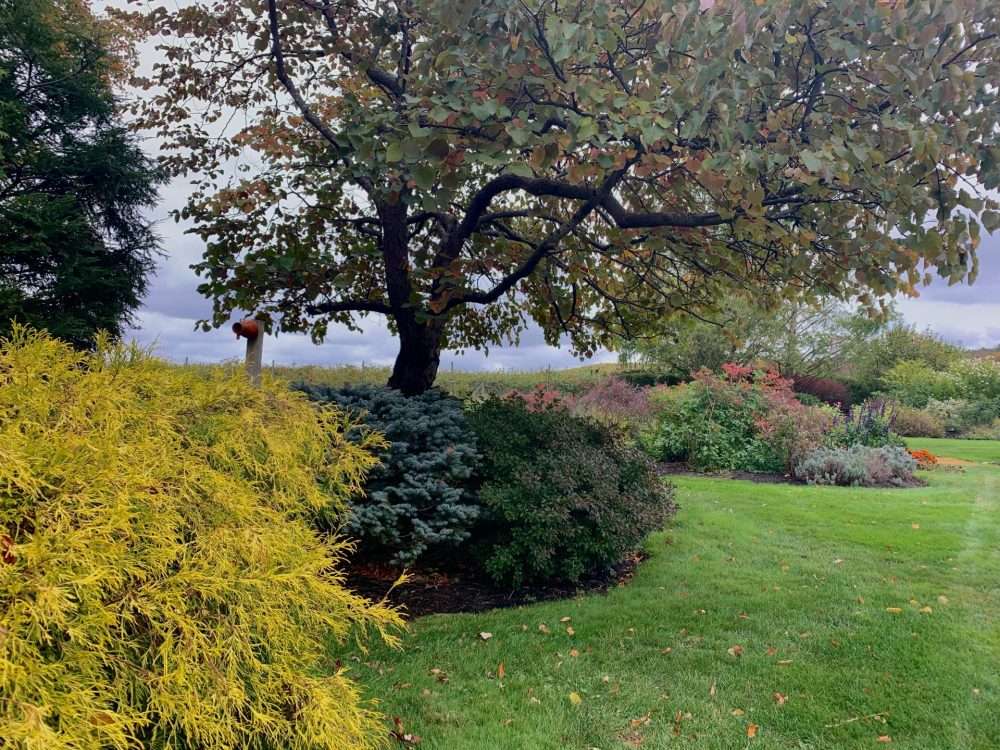 Soil and sun are all very well and good, but a garden can’t grow without water. Since, as you can probably tell by now, Karen goes big or goes home, she had an 850-foot well drilled. “With the kind of investment I was making in this garden, I wasn’t willing to just let everything go during periods of drought.”

With the infrastructure in place, it was time to have fun and bring on the drama. Not a problem for someone who trained as an opera singer for 12 years. In fact, both Karen and her husband Lonnie trained at Indiana University. After graduation, they went to New York City and tried to break into the business.

“I did the starving artist bit for three years. Then I came to a fork in the road and made a decision to go into the tech  industry, I went into business and entered the sales side of things. I had sold pianos before, and had been good at it then. I found I was still good at sales and that’s what I built my career around.”

But she never lost her love of all things theatrical, and compares the topography of her garden to a raked stage. That’s a set that slopes upward, away from the audience, giving those at the back a better view than if all the seats were at the same level, which explains why so much of the garden is visible from no matter where you stand. As I looked out from the back deck, I could see how the garden layout moved from orchestra pit to mezzanine to balcony.

Unsurprisingly, this was not by accident. Karen considers herself a student of gardening, but says, “I’m not a designer. Never claimed to be one. So I got help from someone who knew what he was doing.”

Enter landscape architect Thomas Wirth who fit in 40 specimen trees to replace the felled maples; added a koi pond; used the existing gazebo as an architectural element; and created flow and balance throughout.

Although the garden was professionally designed, it’s continually evolving. Karen adds here and subtracts there as the muse dictates and aesthetics allow. “My major considerations when planning and working in the garden are height, texture, bloom time, and maintenance,” she says. “It’s an experiment, number one. It’s a puzzle, number 2. If something doesn’t work, if it’s only pretty for a brief bloom time and then ugly for the rest of the year, out it goes.”

As you can see, she’s ruthless. Karen says it’s the only way and cites her decades in executive recruiting as good preparation for ripping out uncooperative plants. “Now that was a ruthless business,” she says.

My tour over, Karen sends me off with a red Solo cup full of dahlias and other autumn gems that she clipped with her number 2 Felcos as we strolled the grounds.

“Don’t forget to let me know which plants you want divisions from,” she calls out as I leave.

Oh, don’t worry, Karen. That’s an offer nobody could refuse. 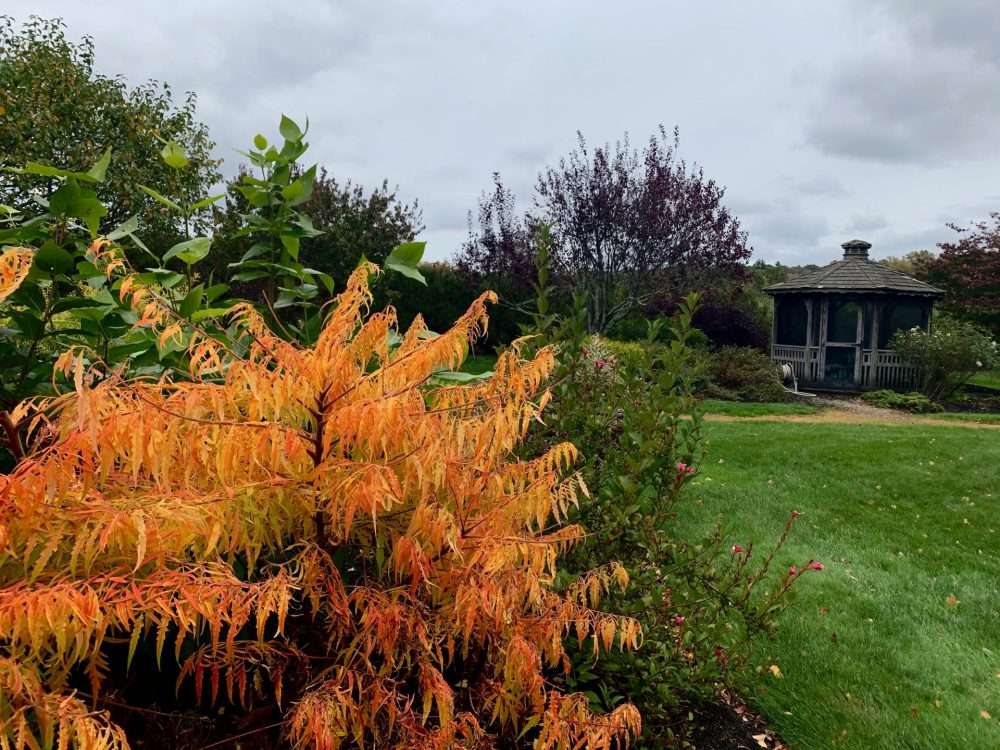 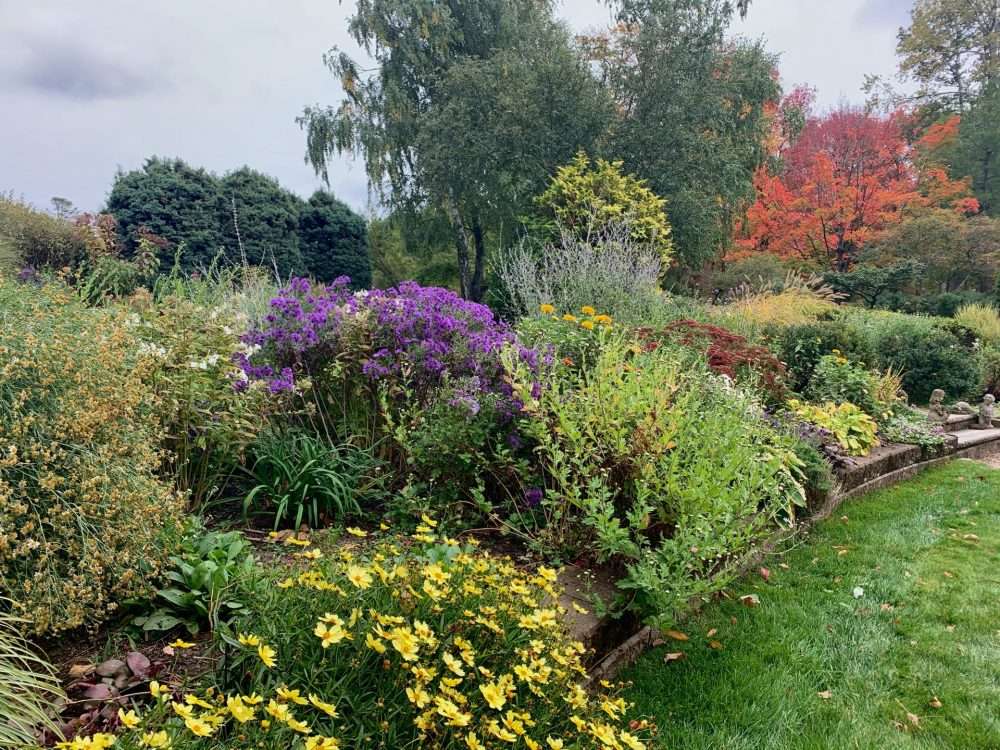