At a Natick School Committee meeting conducted on Mon., Jan. 11 via Zoom, SC members, school administrators, faculty members, and families cheered on seniors who won two of Natick High’s most prestigious academic awards. Other agenda items visited included a report on a space and utilization study on 7 out of 8 of Natick’s schools; and talk of naming the new Kennedy Middle School planetarium.

Here are more details on a few things jumped out at us during the 3 1/2 hour Zoom meeting:

Supt. Anna Nolin presented the Certificate of Academic Excellence from the Mass. Association of School Superintendents to two students. The annual award is given to high school students who have distinguished themselves in the pursuit of excellence during their high school careers.

In presenting to Ryan Scully, Nolin characterized her as,  “A top student, a highly principled and trustworthy individual, and a thoughtful young woman who thinks deeply about ways to make a positive impact on the world.” Nolin noted that Scully was the recipient of the Harvard Book Award; a member of the National Honor Society; continues to participate extensively in community  service projects; and was a captain of the varsity basketball team.

The second recipient was Spencer James Anderson, who was lauded by Nolin for his flawless academic performance and his outstanding character. “Spencer does not wear this outstanding ability as a badge. He is one of the most considerate, hardworking, and humble students anyone can encounter,” she said. Anderson has coached youth basketball; mentored young soccer referees; is a leader in the Natick High Politics Club; and has worked on a local senate campaign.

In addition, two students were awarded the National School Development Council Awards presented to high school seniors who have consistently pursued a high level of academic effort, and who have also served as positive role models for the student body.

Nolin congratulated Nathan Pravda for his award, noting that, “He has an innate tendency toward helpfulness and doing the right thing.” Pravda carried a demanding course load, and regularly appeared on the high honors roll. He is a recipient of the Yale Book Award; is an instrumentalist in the jazz ensemble; and is involved in taekwando as well as with the youth group at his synagogue. For his Eagle Scout project, Nathan built outdoor seating at the Bacon Free library, designed with accessibility in mind, and with a beautiful view of the South Natick dam.

Hannah Takasaki, “An industrious and disciplined student who is kindhearted, passionate, and trustworthy,” was the second recipient of the prestigious award.” Takasaki’s sincerity and exceptional time management and organizational skills that she used to tackle a rigorous program of study were cited. In addition, she is a member of the NHS gymnastics team, a pole vaulter, and a pianist.

Congratulations to the award-winning students.

In an effort to address what one SC member referred to as “early warning data” that space constraints in the schools could become significant problems in the future, the town has contracted with TBA Architects to put together a study on the use and utilization of space in the Natick Public Schools.

Owner and principal Jason Humphreys of TBA  gave a presentation that looked at seven out of eight of of the school buildings (the exception being the newly constructed Kennedy Middle School). The capacity of each school, along with the way the space is currently used, and the space needs now and in the future were included in TBA’s presentation.

Durning a fact-finding phase, TBA toured NHS; Wilson Middle School, and Johnson, Ben-Hem, Memorial, Brown, and Lilja elementary schools. From there, TBA developed diagrams of the existing space use of each room in every school, looking at how the buildings were used all day long. The goal was to figure out if spaces are adequately utilized, or over- or under-utilized.

In general, TBA found that space is tight in a few areas. For example, it isn’t unusual across the board for a school to carve workrooms and offices out of “found” spaces, especially spaces that were originally designed as storage or music practice spaces, as well as corridors.

Johnson, the smallest school in the district, was identified as the “most deficient” when held up to Massachusetts School Building Authority guidelines.

In addition, the ten-year old NHS was called out as overcrowded and over-utilized. “It appears designed for about 3/4 of its current enrollment,” Humphreys said.

Possibilities tossed out for future planning:

Incrementally add on to and/or renovate all schools.

To alleviate the pressing needs at NHS, move the preschool out into another building, freeing up much-needed classroom space.

Tear down and rebuild Johnson school. 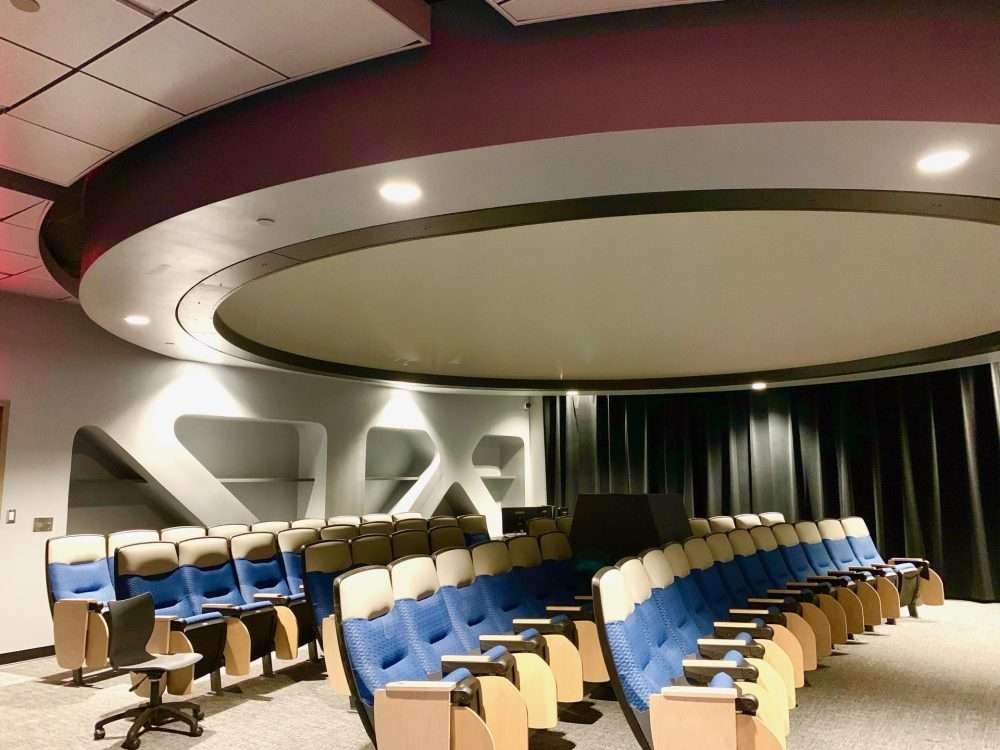 There is a proposal to name the planetarium at Kenned after Ed Jameson, a longtime and beloved Natick teacher. There are a few administration hoops to jump through, but the idea is popular and expected to pass easily.

Tune in next time

Checking out Natick’s new Kennedy Middle School from inside, outside, & above