When I first sat down to review the Feb. 17 Natick Planning Board meeting to learn the latest about developer Stuart Rothman’s proposed “pop-up hamlet” for his property at 1 South Main St., in Natick Center, I started fast forwarding through the recording and was struck by Mr. Rothman’s body language. He seemingly couldn’t stop shaking his head, and rubbing his hands through his hair and across his face: This fidgetiness couldn’t be a good sign.

As it turns out it wasn’t. After saying a couple of times during the meeting that he would pull his plans, then deciding at the end of the public hearing that he would sleep on it, Rothman did indeed pull his plans to develop the prominent site, which has stood vacant since the devastating fire in the summer of 2019 burnt down the previous structure (an updated MetroWest Daily News story includes an update on Rothman’s letter sent to the town after the Planning meeting). During the hearing, the Planning Board’s 3-2 vote in favor of the plan proved not decisive enough to allow the plan to move proceed immediately.

The issue for one Planning Board member was the slope of a sidewalk along the property and concerns about Americans with Disabilities Act (ADA) compliance, while another member had general concerns with the long-term prospects for the one-story building, which would be designed for small artist and other shops that Rothman said would be affordable to those who can’t handle $2K per month rents elsewhere in the area. It was only about a month ago, at the Jan. 6 Planning Board meeting, when Rothman sprang his vision for the 5,342 sq. ft. pop-up village with an inner courtyard (tune in at about half hour mark of the Natick Pegasus recording). He vowed this past week that the project would be ADA compliant, though resisted wording he said might have required him to spend $80K fixing sidewalks, and then maybe ultimately more on street work (it’s not uncommon for municipalities to work with developers to upgrade sidewalks).

About 20 minutes into the meeting, Rothman said the 3-2 vote basically killed the project, and that he was comfortable with this. He described this as a “very tight” building with little room for additional costs. Later on he said he’s got so many projects going on right now that “my head is crashing…I don’t need to do this… I wanted to do this so badly….I can live with life, I’m  going to go to sleep tonight, I’m going to wake up tomorrow morning, and we’re all going to go on.”

About 90 minutes into the meeting, Rothman expressed his exasperation with Planning Board Julian Munnich’s concerns about the sidewalk grade and what he described as an inconsistent approach to assessing the downtown project. “This is not the way you treat developers,” he said.

Give credit to Chair Terri Evans, who appeared close to pulling out a dramatic save after more than an hour of dramatic debate and testimony at the meeting, one of many that Rothman and team have participated in over the past couple of years. He earlier dropped a plan that would have brought a two-story mixed use building to the block featuring apartments and businesses.

After Rothman’s first acknowledgement (using his best indoor voice) early on in the meeting that the plan might be kaput, Evans offered: “Let me just think because I think we’ve put i an awful lot of work all corners on this and I’d like to think we can make this work.”

About an 90 minutes into the meeting Evans came back with: “I don’t want to give up on this project,” suggesting that the public hearing be continued until March 3 so that work could be done on rewording language on an agreement. “It would be somewhere beyond a shame,” if the deal fell through, she said, in that it would be “an economic disappointment for the town” and for the cultural and business potential it would have.

Now in light of Rothman’s decision not to move forward with this plan, there will be no pop-up hamlet at the 1 Main Street, just a chain link fence adorned with some Walnut Hill marketing materials and artwork.

As Planning Board member Andy Meyer stated during the meeting: “It would just be almost a farce if we were to screw this up at this point in time given how close we are…I can’t even tell you how embarrassing it would be for all parties involved if we can’t get this over the goal line.” 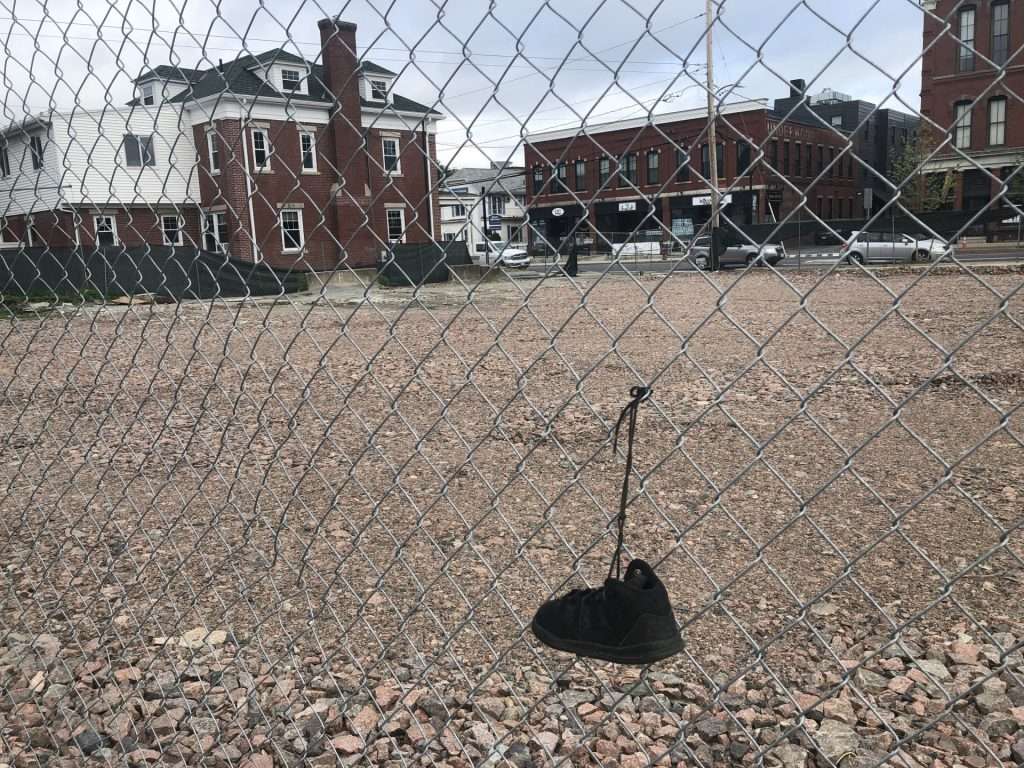