In googling “Natick” recently I was puzzled to see “natick crossword” show up as one of the top related searches.

Turns out that “Natick” is a dirty word among crossword puzzle enthusiasts in that it refers to an unguessable answer, according to the guy who coined this term.

That guy is Michael Sharp, a professor who blogs about crosswords under the moniker Rex Parker. [He claims on his blog: “I am the Greatest Crossword Solver in the Universe (when I co-solve with my wife)!”]

Whether Sharp has ever even been to Natick… I’ve been asked during a Twitter exchange not to reveal. But let’s just say there’s a reason he finds the town’s name to be a tough puzzle answer.

Here’s how he explains the term “Natick” on the front of his website:

A long time ago, I was solving this puzzle and got stuck at an unguessable (to me) crossing: N. C. WYETH crossing NATICK at the “N”—I knew WYETH but forgot his initials, and NATICK … is a suburb of Boston that I had no hope of knowing. It was clued as someplace the Boston Marathon runs through (???). Anyway, NATICK— the more obscure name in that crossing—became shorthand for an unguessable cross, esp. where the cross involves two proper nouns, neither of which is exceedingly well known. NATICK took hold as crossword slang, and the term can now be both noun (“I had a NATICK in the SW corner…”) or verb (“I got NATICKED by 50A / 34D!”)

As a result, the term “Natick” can be seen in the online Urban Dictionary and elsewhere referring to its crossword infamy. The PuzzleNation blog ran a post in 2020 headlined “Crimes Against Crosswords!” that cites Naticks. 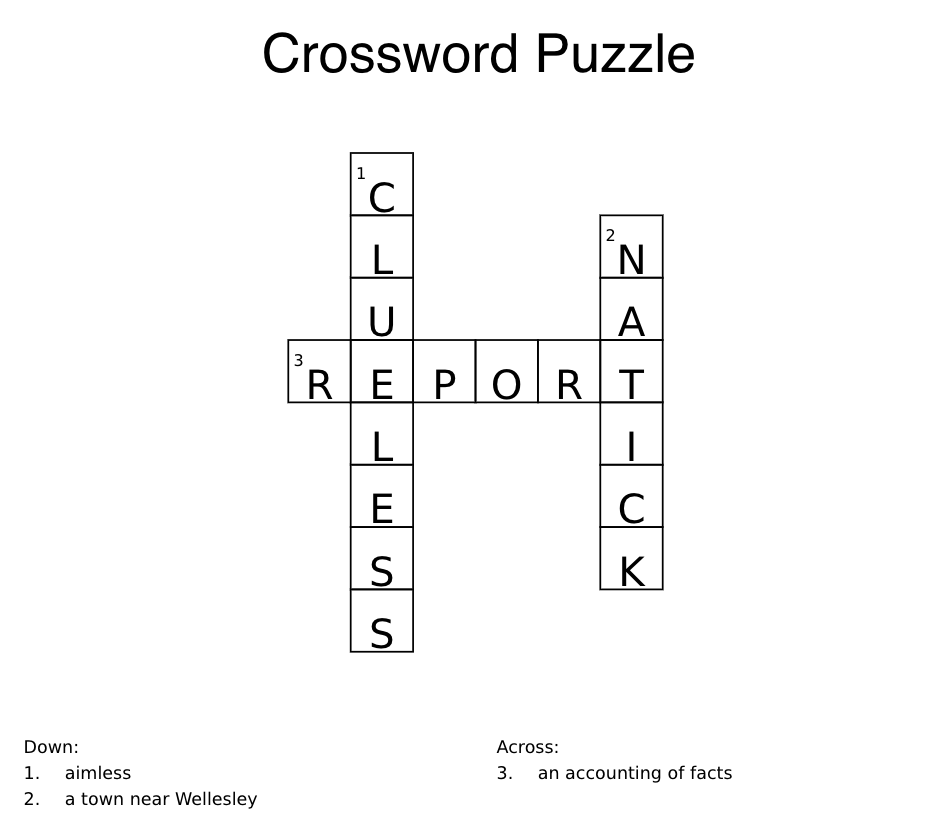 Little did 11-year Natick resident and crossword puzzle creator Tap van Geel realize when his puzzle was published in The New York Times in January of 2019 that his hometown would be a point of note. The Times‘ Deb Amien wrote in her Daily Crossword Column:

Alert the media! The crossword puzzle constructor Thomas van Geel makes his New York Times Crossword debut today, but that’s not even the best part. The best part is that he lives in Natick, Mass. I don’t remember the last time I was this excited about a debut for entirely geographic reasons. This is too good to be true.

For his part, van Geel, is not a fan of crossword Naticks. “If an answer is too obscure, it’s not fair or fun to the solver, and should be avoided. I would love to sneak Natick into a puzzle, but I’m not surprised it became the poster child of obscure entries,” he says.

Interestingly, van Geel is not alone among those who have called Natick home to make their mark on the New York Times crossword scene. Another is Sam Trabucco, who has published multiple puzzles in the Times. When asked by Times columnist Amien what drives him to construct puzzles, Trabucco replied:

To rescue my hometown, Natick, Mass.’s heinous reputation among crossword people. For real, I was very confused when I first got into crosswords and read about “Naticks” considering I did spend 18 years of my life there. I even used to watch the marathon from there, like the clue mentions!