One thing we realized as we checked out Hot Doogy, the new Brazilian-style hot dog restaurant in Natick’s Sherwood Plaza, is that we hadn’t actually had a hot dog since the start of the pandemic.

Dogs aren’t a part of our home dinner rotation, so we usually stick to ordering them at places like ball parks or concerts or barbecues…or other places that we have’s been since the start of the pandemic.

With all that pent-up demand we realized we had a hankering, and Hot Doogy, which we’d first heard late last year would be opening on Rte. 9, would be the place to satisfy our craving.

Hot Doogy is the brainchild of husband and wife Thiago and Fernanda Andrade, who started the business about a year ago after Fernanda’s specialties proved popular at their church. They’ve also looped in Thiago’s mother, Izabel, and have been doing a brisk delivery business on the south shore based out of a commercial “cloud” kitchen.

The new Hot Doogy restaurant in Natick is bright, with splashes of yellow throughout, and the music is cranked loud enough to dance but a little too loud to hear if your name is being called.

The eatery boasts that “if you’ve had never had a Brazilian-style hot dog, your life is about to be changed!” As an adult with a stunted palate, I was a bit nervous, preferring most of my food without any condiments. Not wanting to offend and just order a plain dog, I went for the Steak N’ Cheese Doogy, asking only that the vinaigrette and bell peppers be held, while my date went wild with a New York Style slathered with all sorts of moist ingredients like castsup and onions. We tacked on some fries, which arrived to us crispy, flavorful and piping hot.

Our bill for the two dogs, which cost $8 and $9, fries, and 2 soft drinks added up close to $30. No doubt that will cause sticker shock for those used to paying just a few bucks, or less, for dogs at Casey’s Diner or Costco. But in Hot Doogy’s defense, these hot dogs are stuffed with stuff. Their prices range from $5.50 for a Veggie Doogy to $13 for a Brazilian Doogy with all the works. 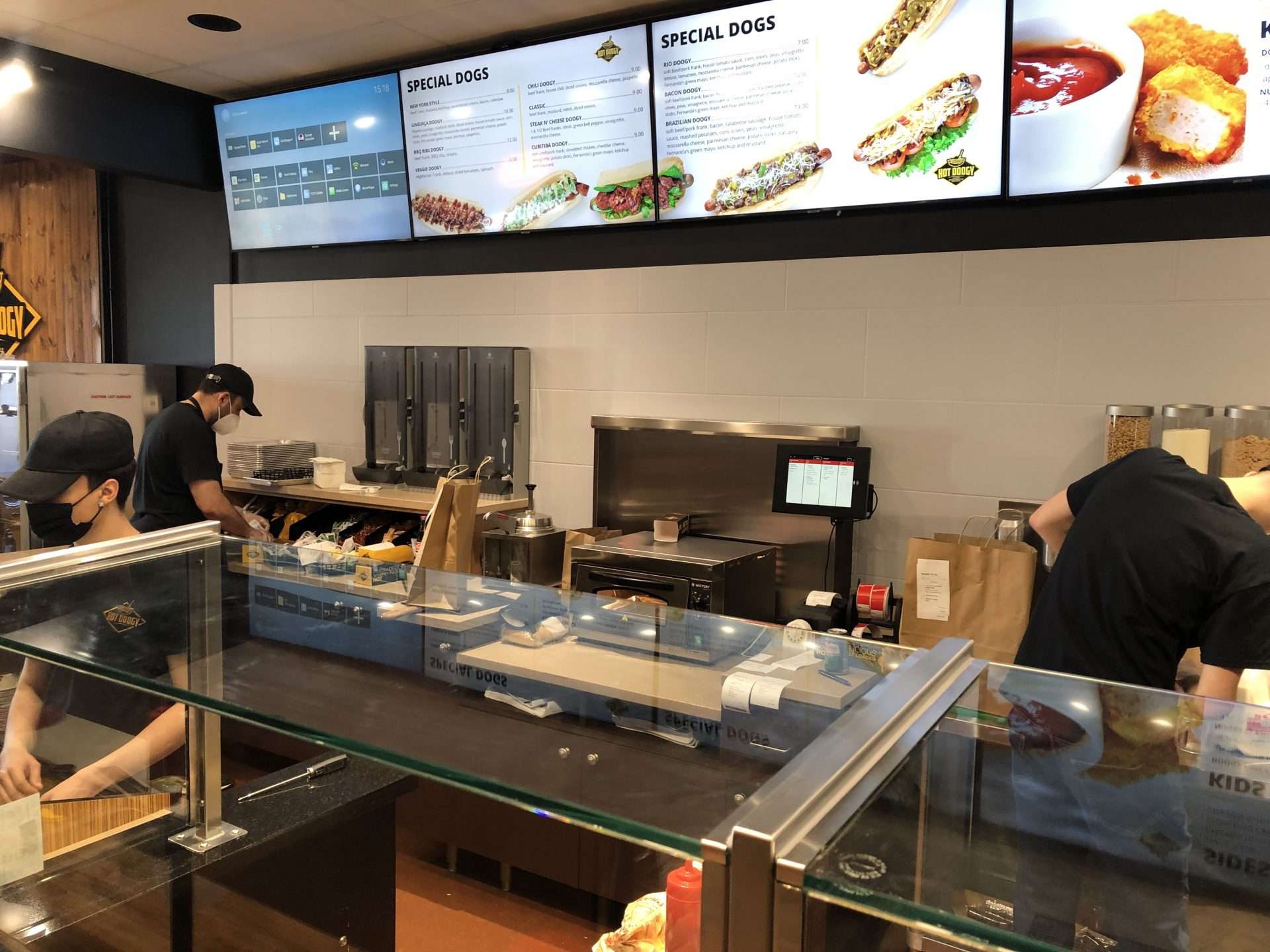 The kitchen was overwhelmed on opening day, as a big crowd descended on Hot Doogy in its opening hours. Once we got our food, not quite ready to brave eating in, we headed for the car to lunch. But socially distant inside eating is an option at their high-top tables, booths, or regular-sized tables (those bright-yellow chairs are so cheerful and cool!).

My steak and cheese was tasty even without all the fixings. It’d never occurred to me to combine hot dogs and steak, but they combined well. Meanwhile, I feared for my car’s upholstery as Deborah bit into her meal, gushing outside the bun.

Once the newly minted staff gets into the groove, all should be well at Natick’s newest eatery.