I’ve been attending Opening Day at Fenway for ages, and it usually seems like a lot better idea leading up to the game than when I actually get there and freeze my butt off. But traditional pre-gaming with friends, and enjoying the sights, sounds & smells of the park do keep me coming back.

Last year’s Opening Day didn’t really happen due to the COVID-19 pandemic, and this year’s didn’t look particularly welcoming given how early we are along the vaccination path. The state gave sports venues the go-ahead to let in fans, at 12% of total capacity, as of March 22. For Fenway that meant between 4,000 and 5,000 fans sprinkled across 37,000 or so seats. 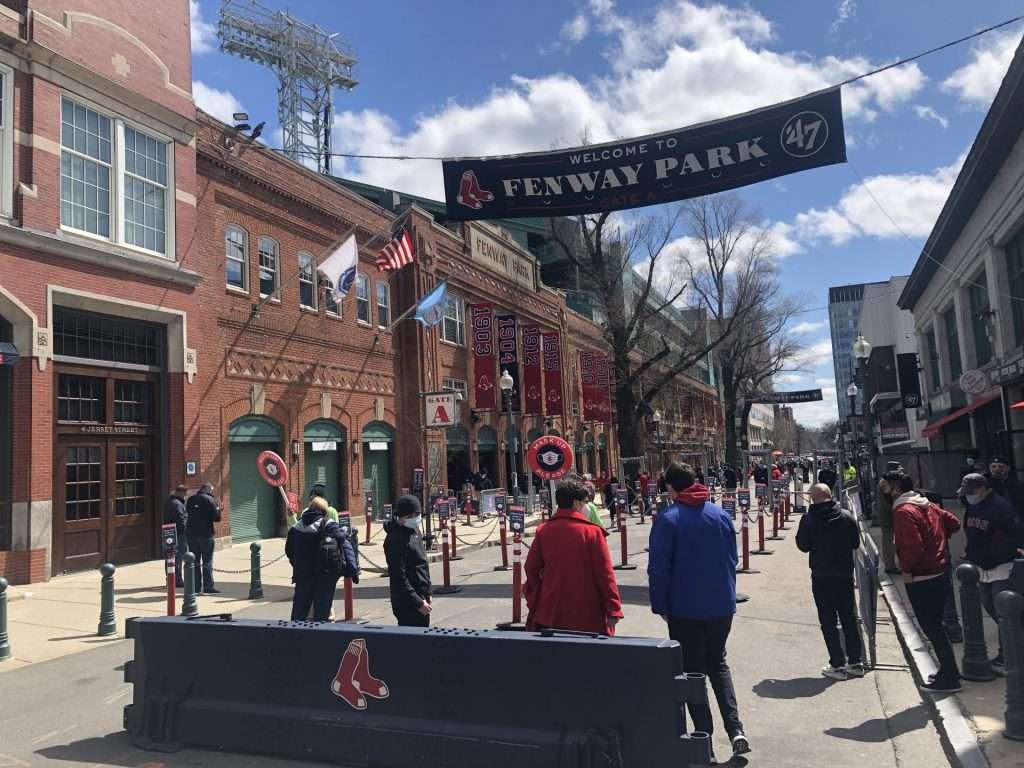 Our Opening Day experience was nothing like any we’d had before.

I usually take public transportation, but am still avoiding that for now. My wife dropped us off and picked us up in Kenmore Square without hitting traffic either way.

The buzz around the park was muted, though fans were sitting outside and inside, and imbibing at staples such as Cask ‘n Flagon and the Bleacher Bar. A few food vendors were allowed to sell sausages and other ballpark delicacies. A David Ortiz impersonator mugged with fans, and a few TV reporters scrounged for fans to yak with. 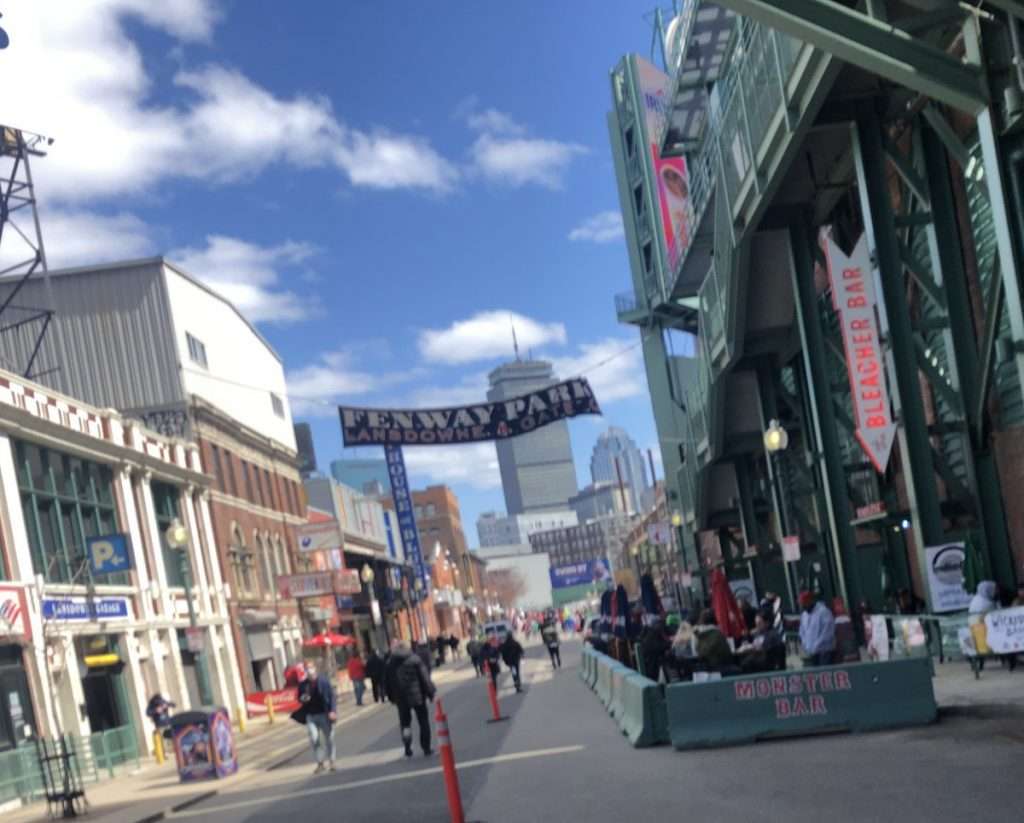 There was no line to get into the park, except for a few clumps of fans here and there who hadn’t prepped their smartphones before arriving. The Sox are delivering all tickets digitally via the MLB Ballpark App, and before you arrive at the park you supposed to fill out an online health survey on the app. When you complete the survey it turns your e-tickets a slightly different color and signals to the ticket checkers that you’ve attested to a clean bill of health. The Sox return home on April 16.

Pro tip: If you already have the app on your phone, just make sure you update it to the latest version, as the older version doesn’t include the health survey.

The Sox at this point are only selling seats through April, as they evaluate their next moves as the state reopens. Tickets cost an absurd amount as always, though note that face value prices vary based on the teams being played and the day of the game.

Once in the park, the crowds are small and many concession stands are closed. Lines at the open ones are refreshingly short, or non-existent. No cash allowed: All payments are contactless.

We were relieved to see no traffic at the restrooms either.

Fans are required to wear face coverings, and we were happy to see everyone complying. You can unmask while eating or drinking at your seats.

Pro tip: to those of you who were glasses and have the option to wear contacts: You might want to go with the contacts if it’s chilly out since you’ll otherwise spend much of the game defogging. 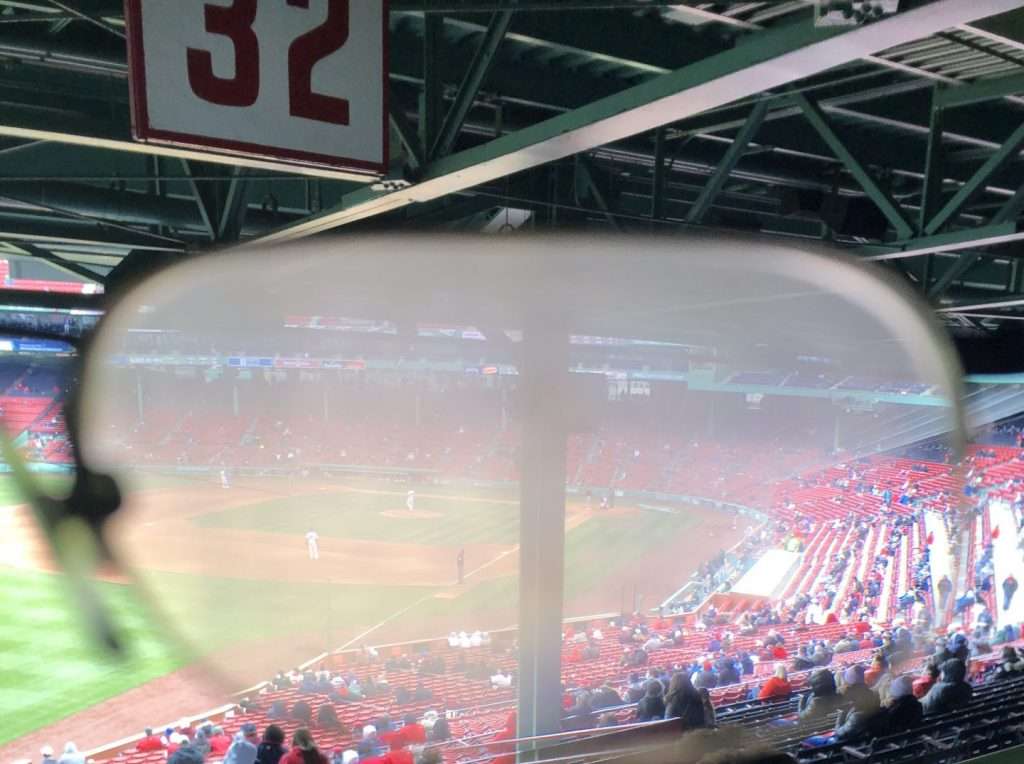 We were a good 6 feet from anyone else, and loved the fact that we didn’t have a parade of fans traipsing back and forth in front of and around us the entire game as is usually the case.

Yeah, I’m one of those crusty types who goes more to watch the game than to take part in all the extracurriculars.  I loved not being harassed by the official photo takers or being blocked by roving food vendors.

Ushers don’t quite know what to do with themselves, pacing back and forth among the empty seats. Some employees are relegated to walking around with signs reminding fans to wear masks.

Fans tried to rev things up, with occasional chants of “Let’s Go Sox!” breaking out and a weak wave attempt or two eventually giving way to the lack of a connected crowd. 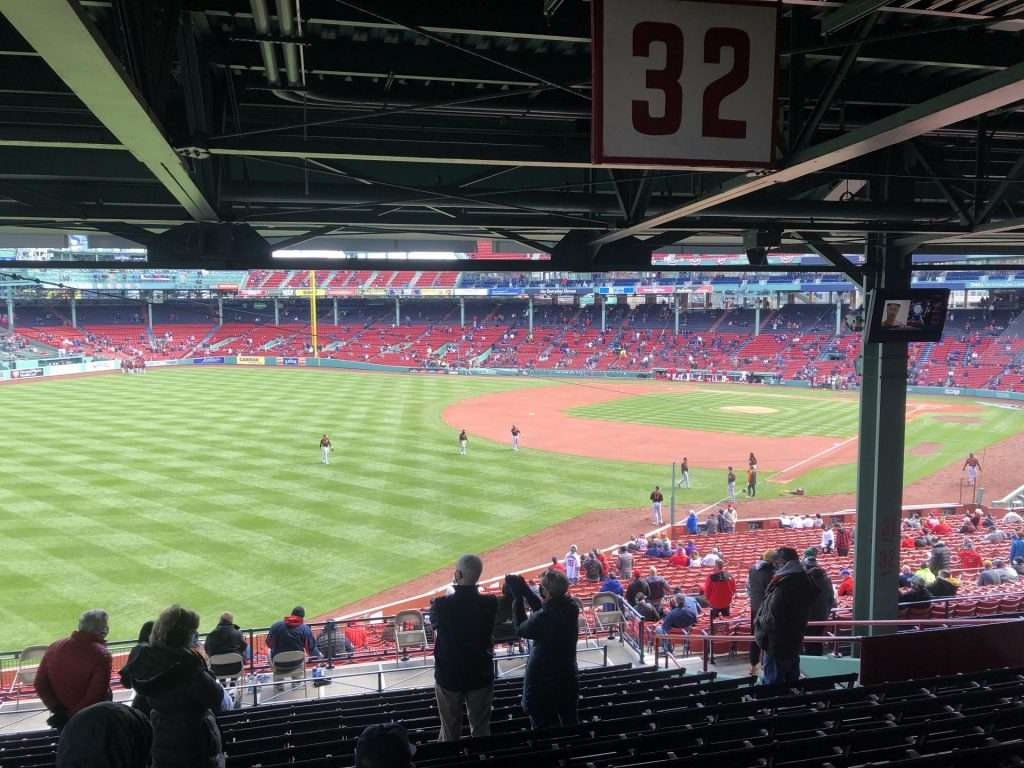 Pro tip: If you are a healthcare worker and you/coworkers want to go to Fenway on the Sox, have your organization hit up customerrelations@redsox.com.The Sox are doling out thousands of free tickets to healthcare workers this season.

The Friday afternoon game itself was awful, with the Sox managing just 2 hits and losing 3-0 to the Orioles. But it was mercifully short given temps that barely cracked 40 and the lowly performance by the team’s offense and defense.

Overall, we felt safe at the game though understood the risks, and credit the Fenway staff for doing a good job of being present but not overbearing. As for the Sox, we’re not getting ahead of ourselves, but at least things are looking up results-wise after their very rough start. 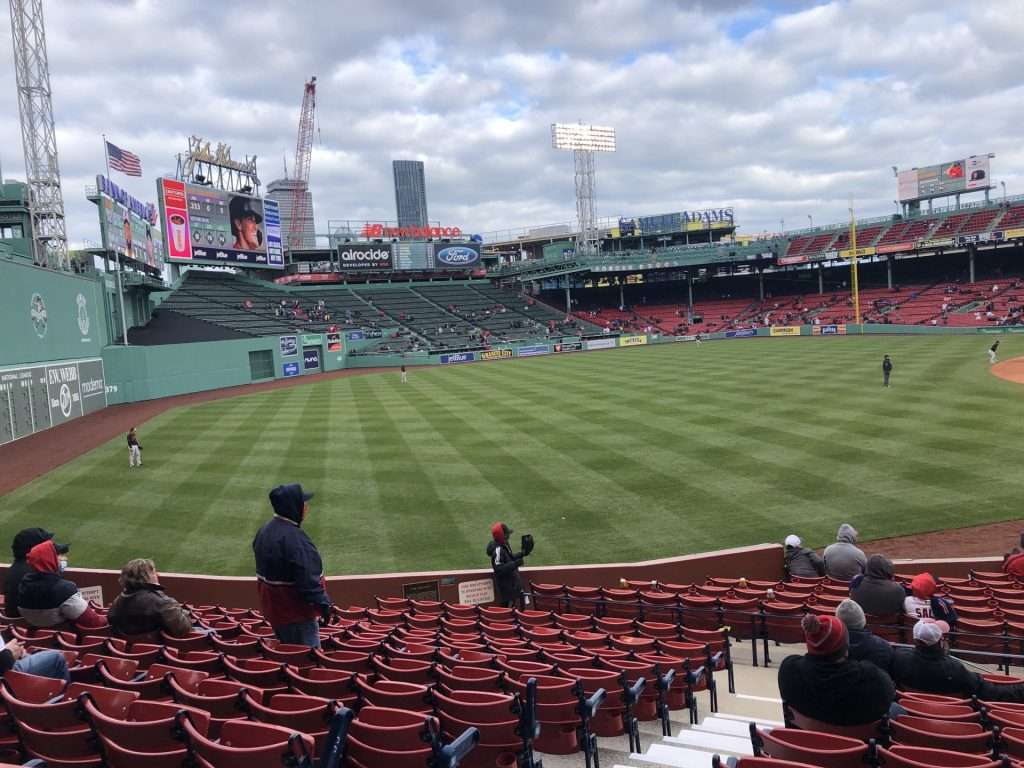