Jimmy Pierce made his first cornhole boards 3 years ago with his brother Danny over a few beers.

“After a crooked hole here and a mis-measure by the big box store there, we had at least 1 good looking set worth painting,” Pierce says. “I messed up my brother’s in the process, and to this day he is still waiting for it.”

Danny might need to wait a bit longer at the rate his brother is going with his side hustle of custom designing cornhole boards, an endeavor Pierce puts serious focus into now. A longtime Roche Bros. employee who has moved from bagging as a 14-year-old to serving as a store receiver these days, Pierce has been touting his wares outside of work hours at Natick Nights events and the Framingham High grad says he’s got a waiting list.

Pierce’s Bearded Ginger Workshop takes in fully-crafted boards from a master cabinet maker, who uses ½” and ¾” Baltic Birch plywood to make the game hardware. Pierce used to love making the boards himself but farmed the work out after tearing a rotator cuff. “I hated giving up this part of what I do, but it was the best decision I ever made,” he said.

Pierce, who went to school in Natick through 4th grade, only this spring moved back to town, renting the home where his grandparents once lived. The basement and garage there are a good fit for his cornhole workshop.

Pierce doesn’t have fancy laser printers or big vinyl sticker machines to adorn the cornhole boards he sells. He works with a few designers and does all the painting himself by hand. Pierce describes himself as “a self-taught creative guy” who has also crafted art from pallets and even a decorative outhouse with a chicken theme. 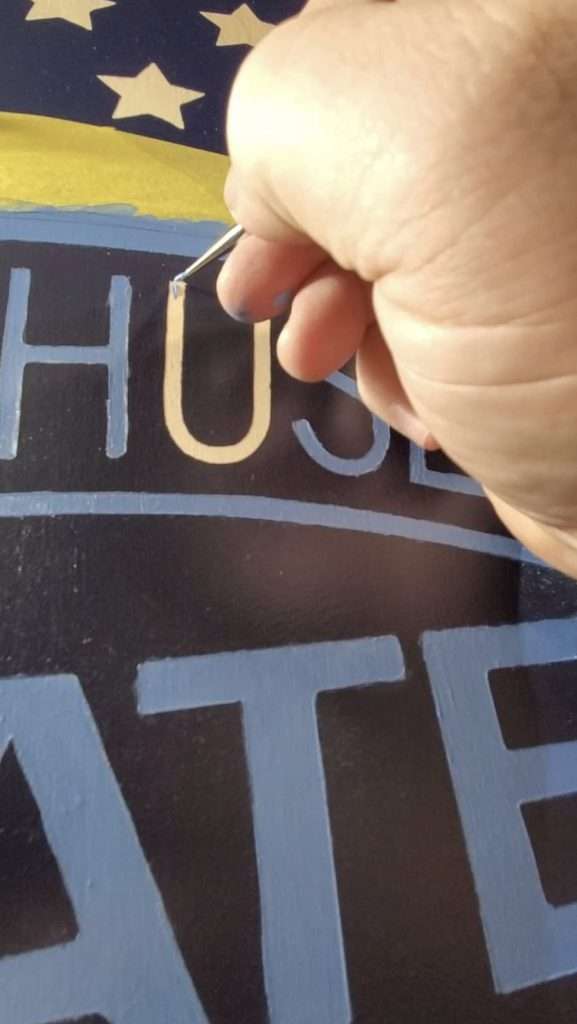 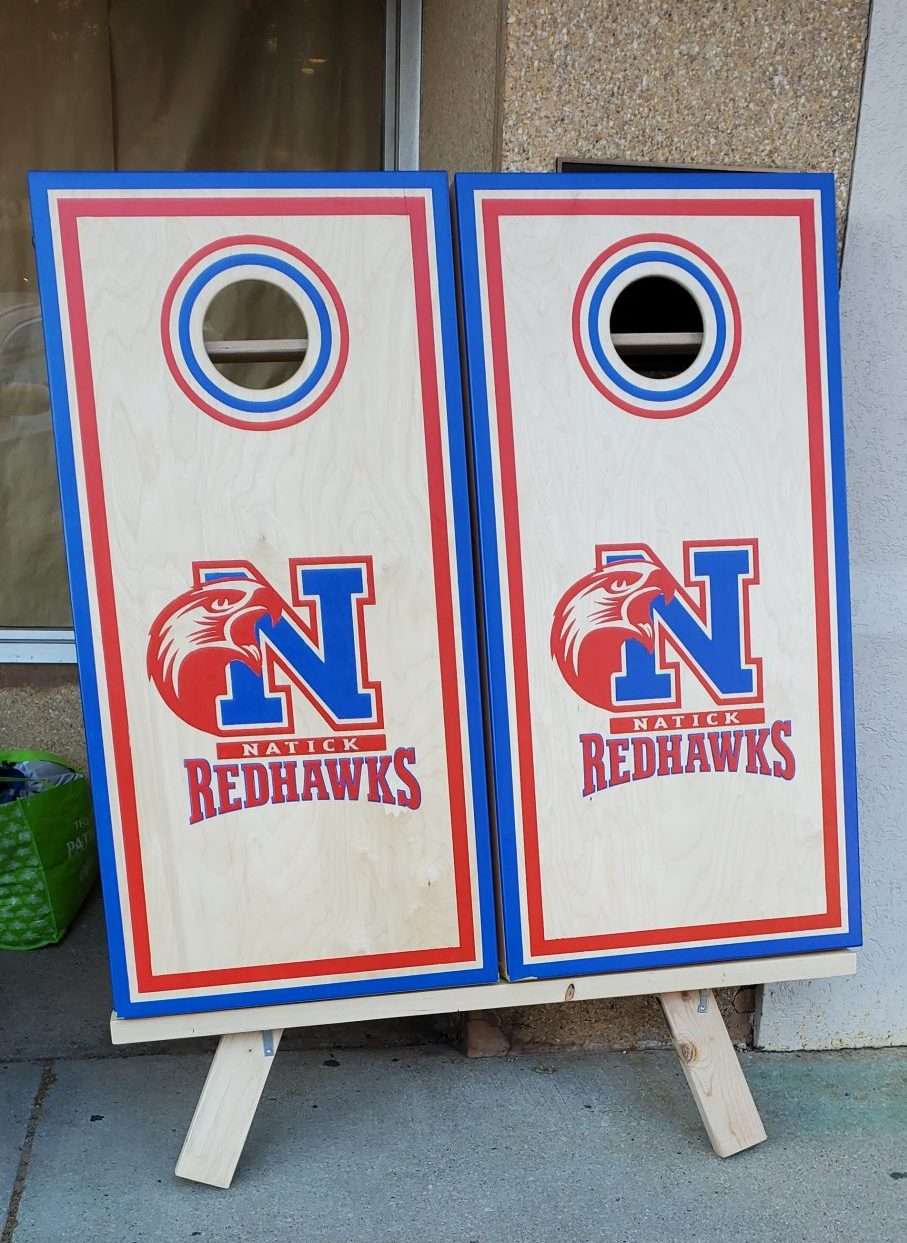 Given the personal attention that goes into each set of boards, Pierce says his product is a cut above the competition. They go for $550 and up (the price of wood has skyrocketed during the pandemic).

“I will spend a few days to a week just discussing the ideas about the design so that it’s exactly what the customer is looking for,” he says. Pierce sends along photos during the process to keep customers in the loop.

A visit to his workshop Facebook page reveals quite a variety of designs, from sports team logos to boards honoring the state police and U.S. Marine Corps. 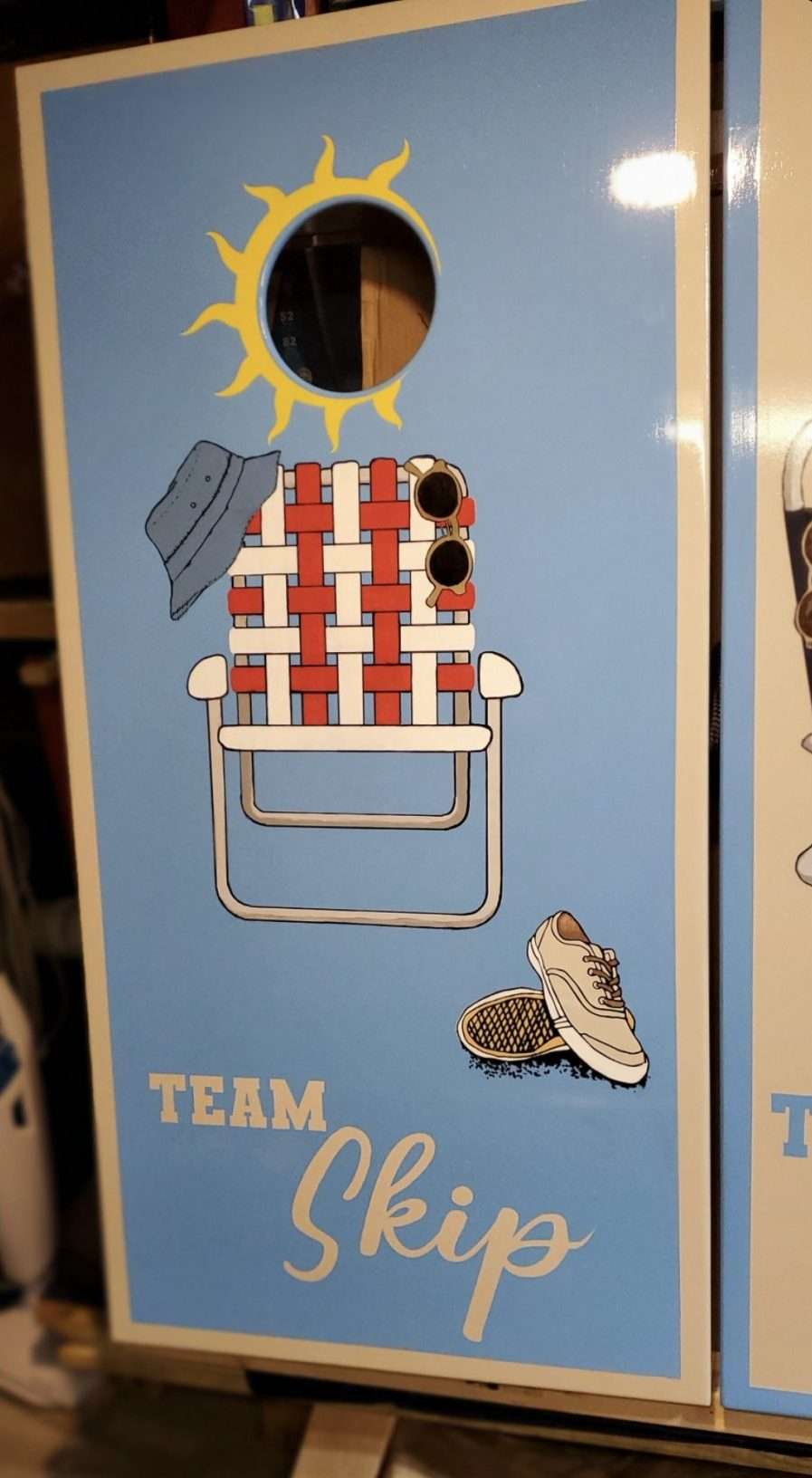 Pierce gets excited about the different projects customers propose, and also about the fact that cornhole has risen from just a fun backyard game to a nationally televised sport. “I want to support the up-and-coming game,” he says.

Pierce has his hands full settling back into Natick and fulfilling orders.

As for his brother’s overdue cornhole set?

“I should get on that,” Pierce says. “Once I get caught up and ask my brother what he wants on his boards, I will make them.”