The list of Natick’s top taxpayers for fiscal year 2022 is almost identical to the list from a year ago, though 1 organization has fallen off and the order in which others are ranked has shifted slightly, according to data from the Assessors Office.

Gone from the Top 10 list is DDH Hotel, which operates Hampton Inn, The Verve, etc. Now on the list is apartment complex Modera. This past year obviously wasn’t a good one for the hotel business due to the lack of travel.

The Natick Mall remains comfortably on top of the list, followed by Mathworks and Avalon.

The overall real estate and personal property value of Natick’s Top 10 fell about $90M, and the organizations’ chunk of the town’s tax levy dropped from 10.66% to 9.16%. 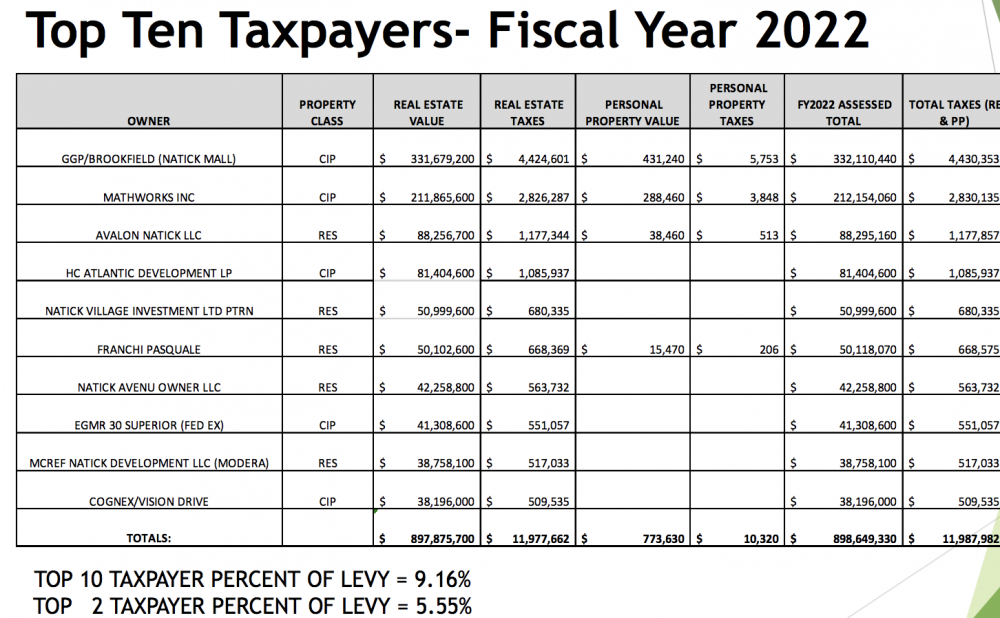 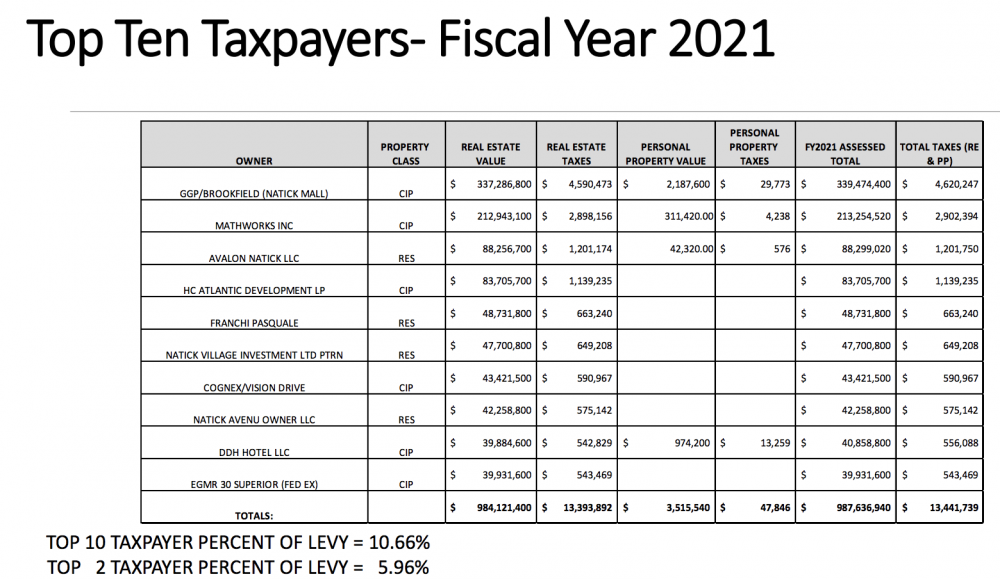 Natick has introduced Amanda Loomis as its new director of Community & Economic Development.

Loomis previously served as Lexington’s planning director for about 2 years, and before that, as Framingham’s planning board administrator. Through her job in Framingham she’s familiar with the Golden Triangle study Natick and Framingham worked on and efforts to revamp that retail area.

She replaces James Freas, who resigned to take a job in Charlottesville, Va.

Loomis has already had a busy start, doing the rounds at Select Board, Community & Economic Development, Planning Board, and Zoning Board of Appeals meetings.

Natick’s Select Board, which over the summer selected ReLeaf Alternatives as it choice for a second recreational marijuana shop in town, made that decision more formal this week by. The business would be located at property it owns—the former Papa Gino’s site at 291 Worcester St. (Rte. 9 west).

Natick has been in talks with ReLeaf to get a Host Community Agreement (see embedded below) in place that establishes terms —largely financial, such as a $100K community contribution after the first year of operation— for the marijuana shop to conduct business in town. The Select Board on Monday gave that agreement its 5-0 blessing, and now ReLeaf will work its way through more local (such as the Planning Board for a special permit and the Select Board again for a license) and state processes on its way to opening for business.

The first license was granted to Cypress Tree, which is still trying to set up shop at Cloverleaf Mall on Speen Street, awaiting related modifications to the site to be sorted out. More discussion on that could be happening at the Planning Board in December.

So the race is on for Natick’s first non-medical pot shop to open.