I knew “Scootie” was a special piece of healthcare equipment when I learned it had a press agent.

That would be Natick’s Josh Ostroff, who identified himself as such before sharing Scootie’s story with us just ahead of lending out the sturdy KneeRover to its 16th rider since he acquired the gear in 2017.

Ostroff splurged for Scootie—one of those scooters that you rest a knee on and propel with your other leg—after breaking his foot in a “clumsy mishap” that resulted in surgery.

“Insurance would pay for the rental of a crappy scooter, but I was feeling sorry for myself, so a couple hundred bucks was easy to justify,” he says. The scooter proved much more appealing than crutches, and Ostroff got a solid two months out of the device before shifting to a walking boot. 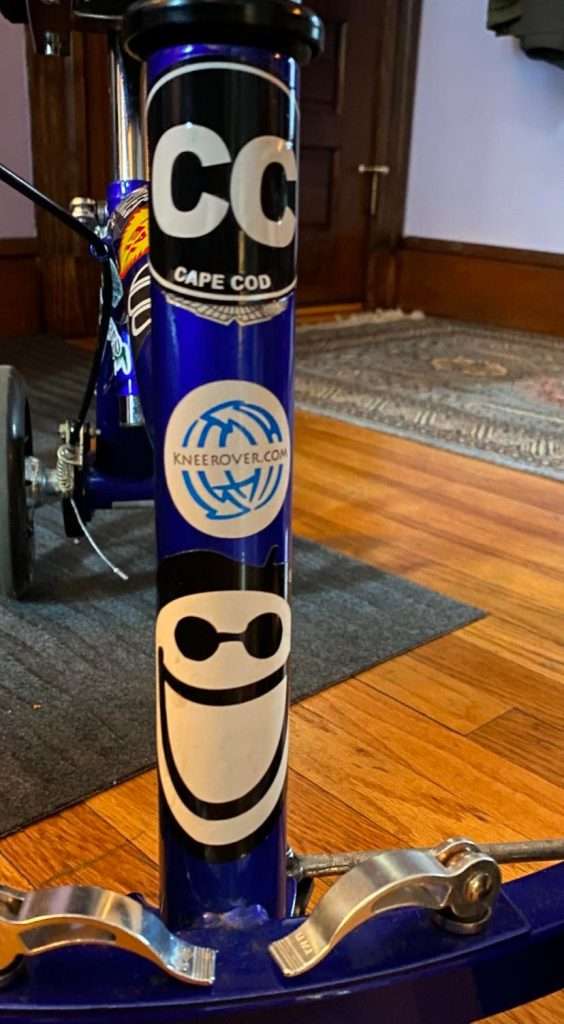 While Scootie didn’t exactly develop a following back then, people were aware of it. Not one to sit around, Ostroff made the rounds at Town Meeting, Earth Day events, and more during his recovery, which he says has been complete thanks to a wonderful medical team. We hear he’s put in a few miles on the Cochituate Rail Trail since then.

Scootie on the move

Sometime after Ostroff was done with Scootie, he learned a friend was having foot surgery and insisted she borrow the ride.

The only price to pay: A sticker of her choosing to apply to Scootie.

More than a dozen others have ridden Scootie since, and most have been strangers to Ostroff, who has made his scooter’s availability known via social media and word of mouth. Scootie has been up to every job, whether it’s taken a weekend or a couple of months.

Scootie’s now decorated with more than a dozen stickers, making it a rolling billboard for everything from Cape Cod to the Fair Share Amendment to Natick’s FIDO. Some handmade stickers are among Ostroff’s favorites.

“It now looks like a college student’s laptop,” he says. 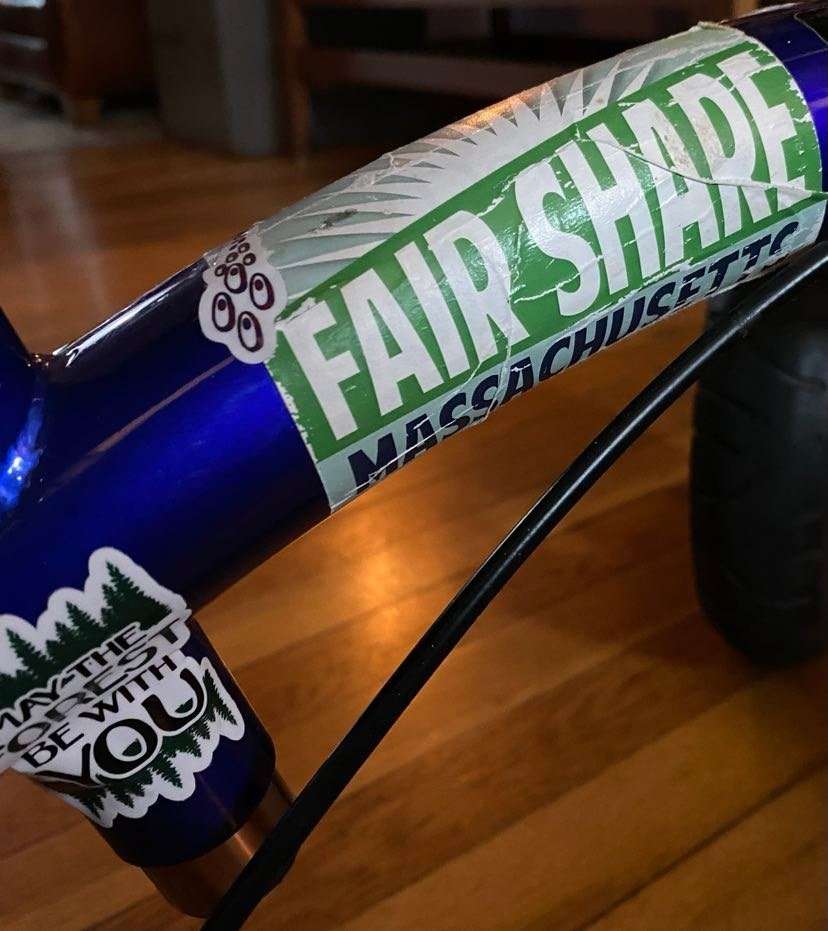 KneeRover, the Augusta, Ga., company that has been making these scooters for more than a decade, has even sent Ostroff a replacement seat and new grips upon hearing of this “Kobalt blue” edition of its product being used to engender goodwill. All in all, Scootie has held up well under its workload. A flat tire a few years into its career being is the only thing that’s ever knocked it out of action.

Scootie isn’t KneeRover’s highest-end offering, but does have beefy enough tires to allow for smooth sailing on some rough surfaces. Ostroff calls it the equivalent of the Mercedes-Benz C Class—not the fanciest model, but still impressive.

Ostroff has modified Scootie with a bell that annoys his wife.

Natick’s Benjamin Lee considers Scootie to be like family.

Lee ruptured his achilles tendon playing flag football last year. He learned about Scootie on Facebook and used it toward the end of 2021 for 9 weeks, including to get around when his wife was in the hospital giving birth to their son.

“It helped tremendously!” he said. “I had no [other] way to maneuver around the hospital in an effective way. Scootie was the star of the hospital and is now a big brother as he was the only visitor allowed in the delivery room.”

Lee remains on the road to full recovery—he’s out of the walking boot and is rehabbing.

“This is a special community here in Natick. We’ve lived here for 12 years and always found support in times of need,” says Lee, who affixed a sticker to Scootie reminding people to practice peace. “We are unfortunately leaving the town as work is moving us across the country. Scootie will always be a part of our first child’s birth story.”

Scootie’s current companion is Natick’s Barbara Comiskey, who had what she describes as “pretty aggressive surgery” on one of her feet to address a painful bunion. “I love walking and am a beginner pickleball player, so my hope is the foot surgery will give me the chance to get out there again without pain,” she says.

Comiskey is off to a good start, working from home this past week, and now heading back to the office. “I just thought getting around the long hallways at work with crutches sounded awful. So my husband reached out to the neighborhood group email to see if anyone happened to have a knee scooter we could borrow,” she says, and they were directed to Ostroff. Scootie will likely be on this job for about four weeks.

“My husband and I got a kick out of finding out the scooter had a name—Scootie. And that the only fee is adding a new sticker,” she said. They didn’t want to invest in their own scooter since they have a small home and wouldn’t have a great place to store it.

While their initial efforts to obtain a knee scooter were about getting Comiskey around at work, she “discovered Scootie gave me new found freedom just days after my surgery. Before the snow, I was able to go up and down our street a bit. Getting to be outside was wonderful. Scootie has also helped me get around our first floor a bit easier. I can fill my travel coffee mug or water bottle in the kitchen, put it in Scootie’s basket, and spin over to my makeshift desk in our living room without having to ask for help.”

While we hope most of you won’t ever have a need for Scootie, at least you now know where to look for help if you find yourself hobbled.

Got a story to share? Please send tips, photos, ideas to natickreport@gmail.com