You’d think a Natick Select Board agenda item with as titillating a title as “Discussion of Fairview Terrace roadways as Public Ways” would be about as compelling as watching pavement dry. But this topic, stemming from the easily-approved Town Meeting Article 20 this past fall, was anything but that at the recent Select Board meeting, with talk of “last ditch efforts,” “our word is paramount,” and “doing our damnedest.”

Over the past few years Natick has systematically been improving roadways. This in part involves converting what are known as unaccepted streets to accepted ones, making them eligible for the town’s full package of love and tender care (not that they are currently ignored—plowing, pothole fixes, and curbside pickup are provided). Natick has knocked off a few miles from its list of more than 20 miles of unaccepted streets, and per that Town Meeting article is set to cross off a couple more miles in the form of eight streets near Dug Pond whose surfaces don’t always look pretty. 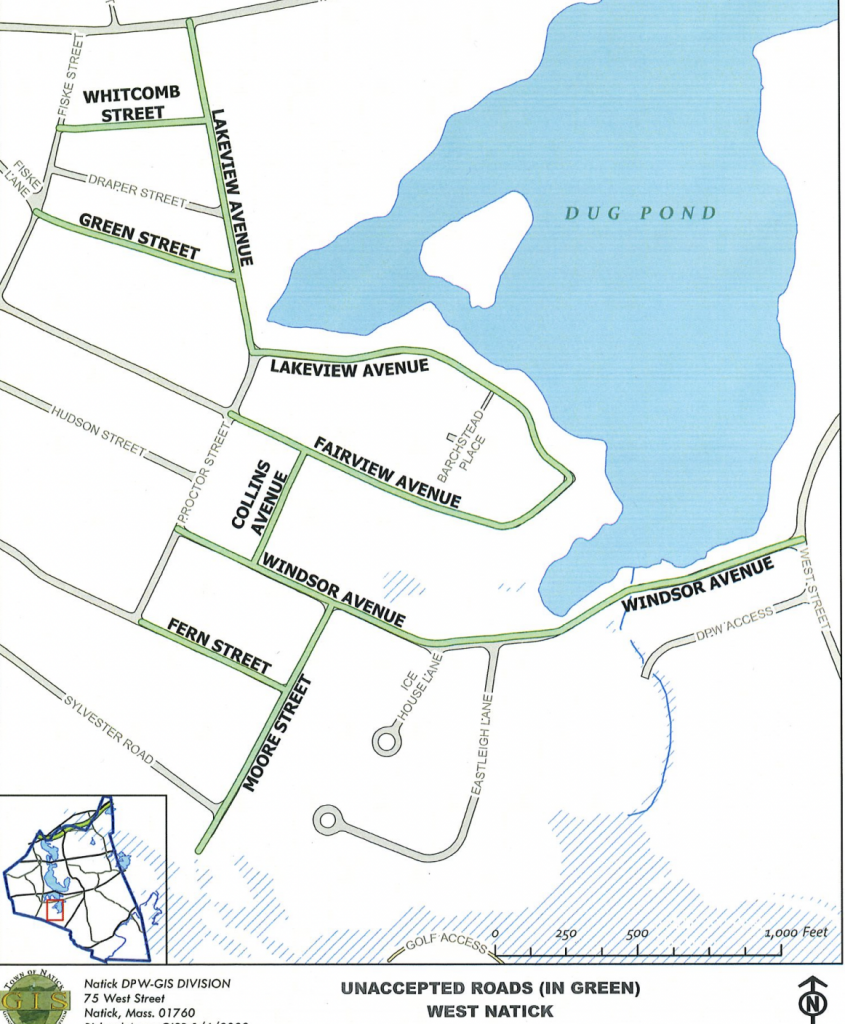 The Department of Public Works has been spreading the word via mail and flyers in the subdivision—created in 1898— about its plans for surface, sidewalk and accessibility improvements as part of taking over these rights of way. Public Works also held a neighborhood meeting this past year. The town has been seeking to get property owners to sign letters of intent to ensure the town won’t need to pay anyone for doing its publicly-funded work on these streets.

While most people have given the project their blessing, about a dozen haven’t responded, and one property owner has rejected the plan and not responded to follow-up attempts. There had been three others against it, but Town Engineer Bill McDowell worked his charm and convinced them to change their minds (well actually, he was able to show the town’s project design, which wasn’t available when the town first met with neighbors online). McDowell stressed that “there’s no work proposed on private property, there’s no taking of private property.”

The question now for the town is whether that one remaining rejection will block the entire project, or if the town can go ahead based on a yet-to-be-defined Select Board policy, such as percentage or number of yeses. The town seeks to avoid liability, however small that could be, as discussed at the Feb. 23 Natick Select Board meeting, (the discussion begins just before the 37-minute mark of the Natick Pegasus recording). Previously, Director of Public Works Jeremy Marsette shared an update on the project at the Jan. 26 Select Board meeting (about 30 minutes into the recording), and he did say work could take place in a portion of this neighborhood even if the town can’t accept all the rights of way.

But the goal is to get neighborhood approval for work on all of the unaccepted streets in the subdivision, which Deputy Town Administrator Jon Marshall told the Select Board has been “a little bit of a challenge.” In light of extensive outreach that’s been conducted, he said the town is fast approaching the point where it needs to decide if “we are going to pivot and look at other projects, or if we are going to move forward and complete the work that was laid out and identified.” He said this is the first such planned acceptance project where the town has run into any opposition.

Select Board member Michael Hickey said the point about the Board’s policy on acceptance rate is important in light of statements made by the town during the Fall Annual Town Meeting process indicating all abutters needed to sign letters of intent. 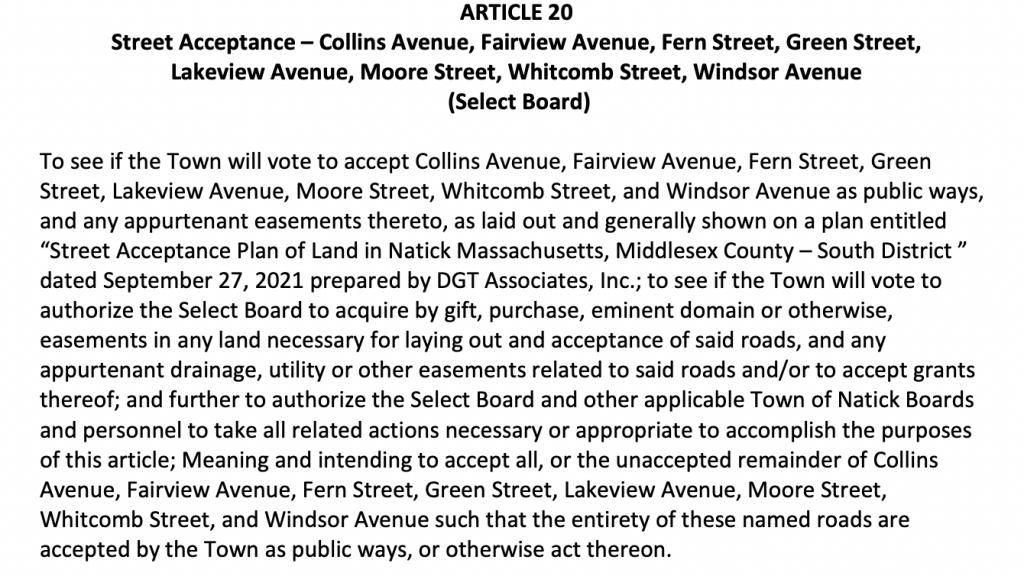 Hickey said going forward the Board could consider whether a certain percentage is required on such matters for the “greater good.” In the case of the Fairview Terrace streets, Hickey described the area as being in “really tough shape,” but the question is whether the town can go ahead with the project based on what was said during the Town Meeting process. “Our credibility is also important, and our word is paramount…,” Hickey said, adding that he’d like to hear from town counsel on what Natick’s options are. “What I’d like to hear from counsel is given where we are with the yeses and nos, what can proceed there within the parameters that were already set, and where else are we moving onto, because there’s a backlog of accepted streets on the capital program and plenty of need elsewhere…”

His frustration was apparent, since well, he literally said in recounting the town’s efforts to move forward on this: “I’m frustrated, I think we all are.”

Board member Rick Jennett said he’d like to hear from counsel on what the Board’s options are based on what was said at Town Meeting. “I think that if [Public Works] has made every effort that they have and you don’t get respondents, and considering the percentage [that have said yes], I’m good with this…,” he said. Jennett added later: “I’m not 100% convinced, no pun intended, that 100% of respondents need to be positive. I don’t think that’s a realistic expectation…”

Jennett said he’d also like to see McDowell make a “last ditch effort” with the resident opposed to the project, to which McDowell jokingly responded: “This will not be a last ditch effort…I have plenty of ditches left in me.” McDowell said he’s confident he can get the holdout to buy in if he gets a chance to discuss the work to be performed in front of their house.