Most of us probably don’t take much notice of the designs used on road signs to distinguish state routes, state highways, and interstate highways—we just keep track of the numbers to figure out where we’re headed. But an eagle-eyed Natick Report reader who asked to be identified simply as “Joe,” pointed out that the new pavement markings for Massachusetts Rtes. 9 and 30 at the Speen Street/Rte. 9 beetleback interchange now feature shields typically reserved for national highways rather than standard squares or rectangles used for numbered state routes.

Sure enough, he was right. After I brought his observation to the attention of the Massachusetts Department of Transportation, a spokesperson quickly got back.

“MassDOT would like to thank you for bringing the issue to our attention. We will work to correct the in-pavement shields,” the spokesperson wrote.

Our roadway informant Joe, a self-described “arm-chair signage nerd,” initially wrote to us: “I just drove through the speen st beetle back. I think they replaced the MA Rt 30 lane marker signs on the pavement with emblems that look like US highway 30. Was Rt 30 upgraded to a US highway or is this a mistake by MassDOT or some other local department?”

One local transportation expert who we reached out to quipped: “Clearly it’s a federal takeover!!”

I messaged back Joe, not quite able to visualize what he was asking about, and told him that I’d head over there later and get a photo. He beat me to it, as he works nearby. His pictures made things quite clear.

A quick Google maps search shows how it used to look. 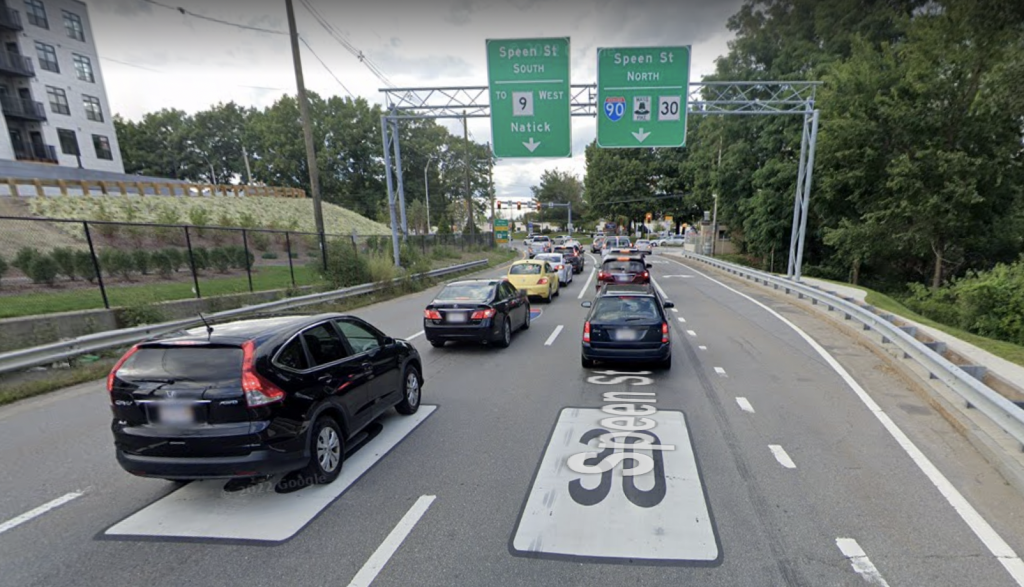 Such errors do crop up from time to time, and have even earned a subsection of the Wikipedia article on the Massachusetts State Highway System. It’ll require a crew to fix it and maybe inconvenience drivers a bit, but in the grand scheme, not such a big deal.

If all goes well, the Golden Triangle will be revitalized, Speen Street will be transformed into a pedestrian-friendly mecca with no need for highway or route signs, and this will all be long forgotten.