We thought our jaunts down to Cape Cod were over until next year, but when weather forecasters predicted an early November weekend with temperatures climbing into the mid-70s, we made plans for one more day trip. A ride on the Katharine Lee Bates Shining Sea Bikeway, an 11-mile paved and level path, was just the thing.

My companions and I chose to start at the Depot Road trailhead in Falmouth, a little under 90-minute drive from Natick Center. There’s free parking area for about 80 vehicles, a bike pump area, and a couple of port-a-potties. You can’t miss the trailhead, right across the street. There are multiple entry points along the Bikeway with good parking and quick access to the path, which follows the route of a former railroad line operated by the New York, New Haven and Hartford Railroad Company. The railway provided service from the Cape to New York and Boston from 1872 to 1968. In 1957, the railroad discontinued use of its Falmouth to Woods Hole line.

By 1976 the Shining Sea Bikeway was open for recreation, thanks to the efforts of Falmouth town officials and residents who made real a dream to pave over the abandoned tracks for the recreational use of all. We couldn’t be more grateful, and take advantage of the trail whenever we can. On this day, our goals were to enjoy the coastal views the Bikeway is famous for, have lunch in Woods Hole, and bike the 11 miles back, logging 22 miles of cycling in all.

Overall, we found the Shining Sea Bikeway to be a wonderful, family-friendly path. Cyclists must cross several streets, but we found drivers to be very courteous, allowing us to safely move through crosswalks as they waited (even though it is the drivers who have the right-of-way and the cyclists who have the stop signs at each crossing). There are places to stop off and get a bite to eat along the trail, or just to do a little exploring. Views of a cranberry bog, ponds, cedar swamps, Little Harbor, and more make this ride beautiful and visually varied.

After our long ride we were ready for lunch. Landfall Restaurant (open for now, but after they serve lunch on Nov. 27, they’re closing for the season) fit the bill. The place was humming. Diners were seated at every outdoor table, and most of the inside dining room, which overlooks Woods Hole Harbor, and bar seating was taken. But they found room for us. Sipping Arnold Palmers after our adventure was a sweet reward. When the lobster pie, seafood medley, and fish and chips arrived, we devoured every bite.

After lunch we set out on a quest for ice cream, but it was not to be. The ice cream shop had already closed until next summer. Across the drawbridge, the proprietor at the market told us he had made everybody happy by passing out free scoops yesterday, so no luck there. Woods Hole is slowly drawing inward as the cold weather approaches. We felt lucky to have this one last chance to visit this late in the year.

The helmet may have been a lifesaver

Because it was a gorgeous Sunday in early November, there was a last-hurrah sort of feel to the day. We found Shining Sea Bikeway users to be not just a celebratory crowd, but a caring one. About halfway along our ride out to Woods Hole, we came upon an awful scene. A man was sprawled across the path, unconscious, with blood pooling on the pavement under his helmet-protected head. A cyclist who was riding behind the injured man said he seemed to suddenly lose control of his bike, and went down hard. Apparently he had suffered a medical event. Thankfully, no one else on the path was involved in the accident. So many people came to the injured party’s aid so quickly. A nurse happened to be on hand and rushed over to provide initial medical care. Someone else called 9-1-1. Others cleared the man’s bike off the path, looked for belongings that may have been scattered, and comforted his partner as EMTs were en route. Other helpers directed oncoming cyclists in either direction around the accident scene. When the injured man regained consciousness, everyone let out a sigh of relief. “Thank God he was wearing a helmet,” a bystander said. It appeared that injuries to his pavement-scraped face were responsible for the blood. As first responders secured the man onto a stretcher and wheeled him to the rescue vehicle, those who had witnessed the event and helped in the aftermath moved along, securing their own helmets with extra care as they remounted their bikes.

What’s in a name?

The Shining Sea Bikeway is named after Bates, the New England teacher, writer, and poet best known for writing the song America the Beautiful, due to the circumstances of her birth. Bates was born in Falmouth town on Aug. 12, 1859 and lived there for the first 11 years of her life. Her father was the pastor of the Congregational Church in the Cape Cod town.

It wasn’t until she moved to the Natick area, however, that she really came into her own. Bates lived just over the border, in Wellesley, for most of her life, graduating from WHS in 1880. She taught at Dana Hall School (which continues to operate as a boarding and day school for girls) until 1886, and then at Wellesley College until 1925. Bates lived at 70 Curve St. in Wellesley until her death in 1929. And Bates Elementary School in the town is named for her.

Not that we’re biased or anything, but it seems possible that Falmouth has bestowed a bikeway on Bates in an attempt to claim the beloved historic figure as its own. But around here, we know who really nurtured Katharine’s intellectual gifts. 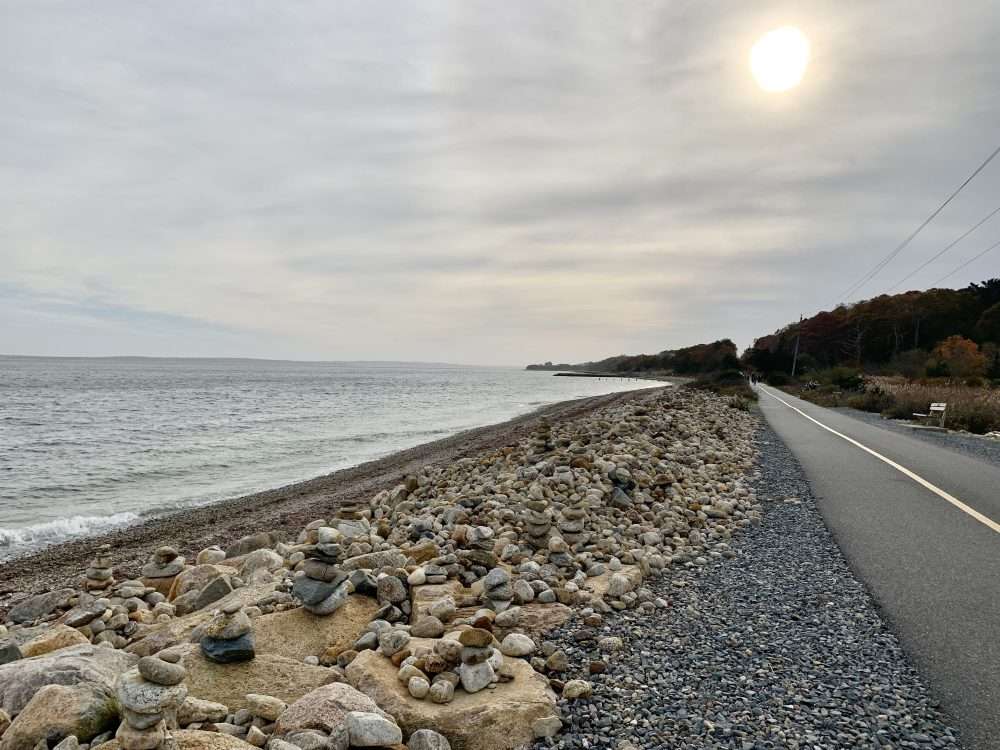