The Natick Select Board, after yet one more round of discussion and public comments, voted on Wednesday night against repairing the South Natick Dam and spillway (aka, waterfall) and in favor of removing the iconic structure.

The tally went 4-to-1, with only Michael Hickey voting against removal of the town-owned property, which he described as the “fabric of the community.”

“I think this is a place you really can’t undo,” Hickey said. “There’s hundreds of years of a community that’s built up around this location. Life decisions have been made for decades and beyond about this location, where streets are, where homes are built, where foundations are poured, where additions are added on…to me, that built environment is not something we can just take lightly and change after this amount of time.”

But he was outnumbered on this issue during the 2-plus hour meeting (see Natick Pegasus recording embedded below).

Among those voting for removal was Select Board member Bruce Evans, who acknowledged how this is an “emotional issue for pretty much anybody in this town.” But he took to heart the thorough work of the Charles River Dam Advisory Committee and its recommendation to remove the spillway.  Financial—including unclear liability issues—played a big factor in his decision. So did reviewing other dam removals that have worked out well.

Even having voted for removal, Evans stressed that “this is the first step in a long process,” and that as permitting takes place and new information emerges, the decision could be revisited by the town.

Board member Rich Sidney acknowledged that “one of the keys here is that aesthetics count,” but also pointed out that the look of this area would be changing under either scenario given the work that would have to be done for a repair. Responsible stewardship, he said, “is not only about the current state, it’s also about what’s good for the future of the town.”

Since 1934, when it was built to give people jobs and create a beautiful park on the Charles River, the dam and spillway have attracted people seeking recreation, relaxation, and great wedding or holiday photos. The town even recently gave its blessing to a TV film crew to shoot at the site.

By ditching the dam, the town expects to save money by avoiding ongoing maintenance and eliminates its liability if the high hazard dam were to be breached by a natural event as climate change takes its toll (the board early during its meeting held a closed-door session to discuss litigation related to the dam decision).

The numbers bandied about during this process have been roughly $2.6M for repair, plus ongoing maintenance costs, vs. $1.5M for removal, and detailed estimates were shared during this week’s Select Board meeting. There would be additional and likely similar costs for park construction and renovation under either scenario. While who knows how much any of this will cost by the time work takes place, grants are more readily available for removal. Spring Annual Town Meeting next year can expect to hear a plea for funds to get design going as soon as the summer of 2023. 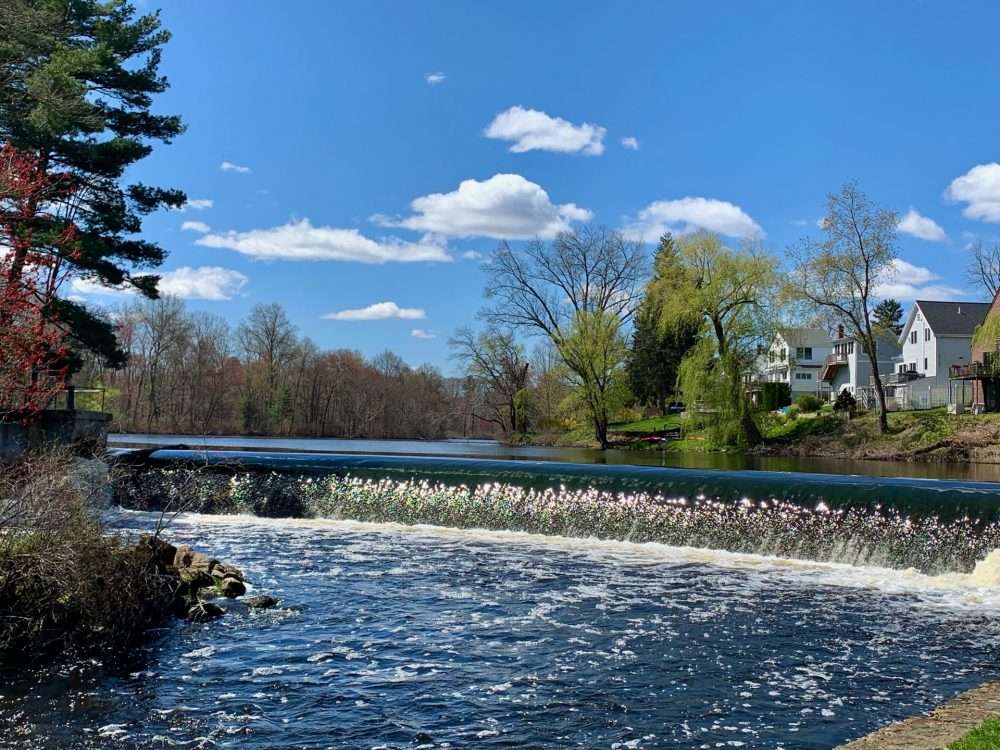 The town’s gut wrenching decision has been years in the making. It initially looked as though Natick would repair the structure, with Town Meeting voting in favor of funding such work twice in recent years. Much to the frustration of dam supporters, the town chose not to fund repairs when a possible alternative approach arose. Annual Fall Town Meeting recently shot down a citizen petition to get the town to revive that repair funding.

Once the prospect of removing the dam and spillway was raised at a public meeting in 2019, it became increasingly clear that the town would likely choose that option. Financial and environmental arguments gained momentum. We heard about all the other dam removals that have been happening in the name of river restoration (not that the public had much of an attachment to most of these). Impassioned pleas were made over the cultural significance of the river and dam, with questions raised by some about whose history mattered most. Such issues were discussed throughout a public process in 2021 and 2022 centered around the Charles River Dam Advisory Committee appointed by a former town administrator.

Residents—both abutters and not— as well as consultants, advocacy groups, and town officials all had their voices heard (disclaimer: we are river neighbors). A “Save Natick Dam” contingent became more vocal in making its case over the summer. 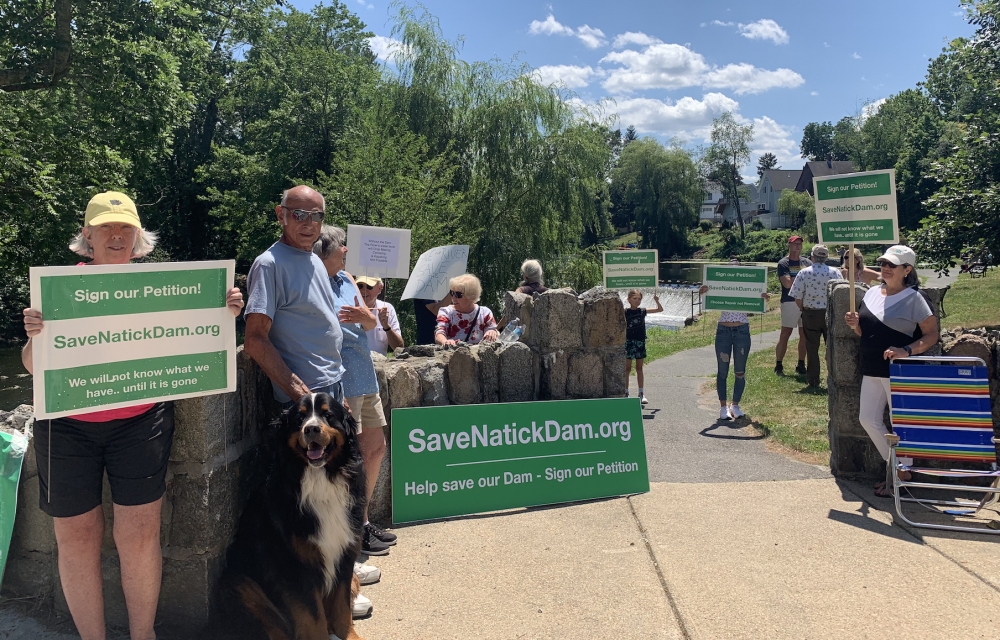 In September, the Committee issued its recommendation for spillway removal to the Select Board, which took things from there.

Over the past few months the Select Board has fielded countless emails and patiently listened to public comments at a handful of  meetings both from those in favor and against removal, and even a few who were on the fence. Those living above the dam fear how removal of the dam could leave them looking at mud flats and shallow water for parts of the year. Others in the area hope removal won’t turn into an aquatic version of the North and South Main Street construction project. All in all, the public discourse has been civil. Sometimes educational, sometimes repetitive, but civil.

This area of the river already teems with wildlife, from herons and kingfishers to turtles, muskrats, bass, and dragonflies. Those favoring dam and spillway removal pledge that even more animal species and plant life will thrive as water quality improves, and that unsavory blue-green algae won’t stand a chance. They also envision a more accessible park that will have its own attractions for years to come assuming that funding can be raised (maybe the town can sell off commemorative chunks of the spillway?).

For those of you who enjoy the sounds and sights of the dam and waterfall, you’ve got about another 6 years to do so, according to an estimated timeline issued by the town. 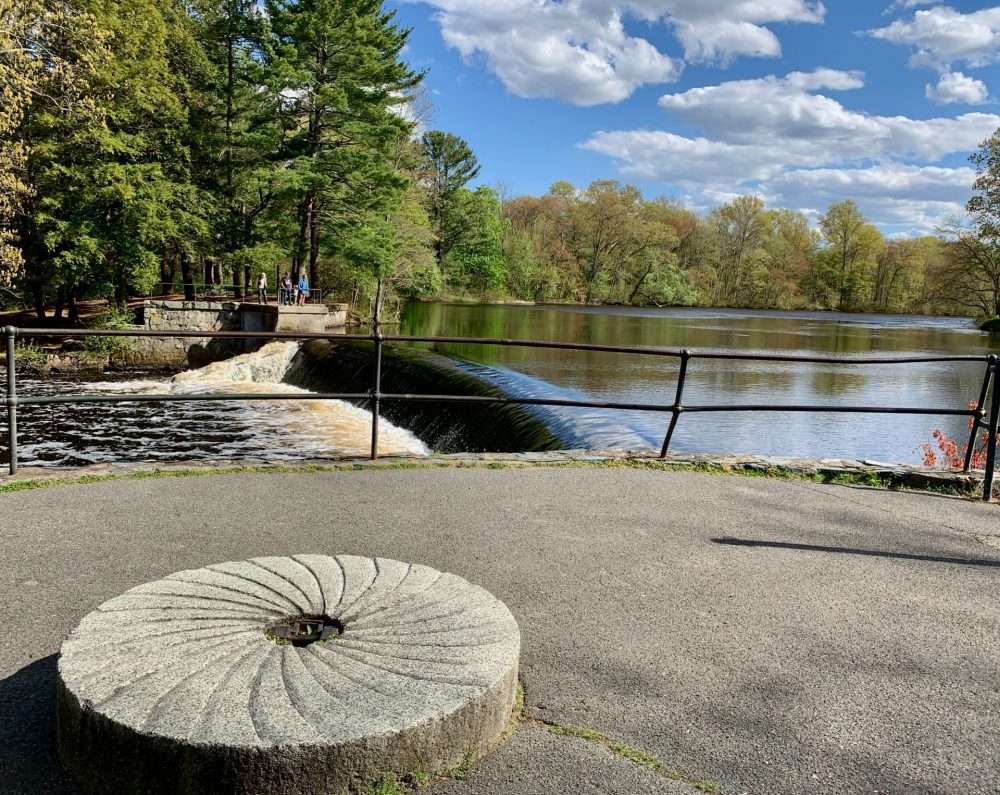