Calling all dog lovers—come to the Bacon Free Library grounds on Wednesday, July 21, 10am-11am to meet and greet a variety of therapy dogs. Since these dogs have received extensive training to help people in need, they are very smart, mellow, and sweet. They can handle a lot of love from dog lovers of all ages. These pups can also help people who are fearful or unsure of dogs to learn how to safely approach and pet a dog. 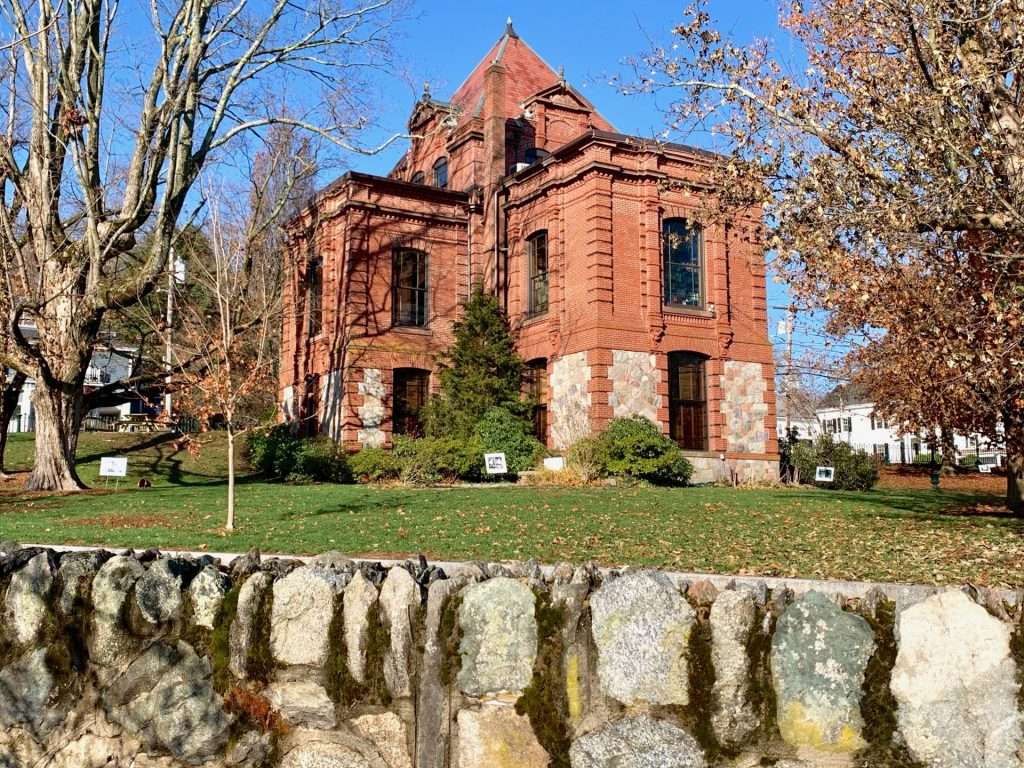 As if coping with a flood warning near the overflowing Charles River and addressing elevated PFAS6 levels in its drinking water supplies through a mandatory water ban for nonessential use isn’t enough for Natick.

The town has also passed along a state warning to residents of toxic algae bloom at Lake Cochituate and is spreading the word that E. coli bacteria has been detected at its Elm Bank wells.

The Massachusetts Department of Conservation and Recreation (DCR) has warned the public not to swim in Lake Cochituate due to the presence of cyanobacteria (blue-green algae bloom) throughout the 635 acre body of water located off of Route 9 and Route 30 in the towns of Natick, Wayland, and Framingham.

Boating and wading are out, too, and pets should be kept away from the popular recreation area. The CDC says that cynobacterial blooms can be deadly for pets. Animals can get very sick and die within hours to days after swallowing cynobacterial toxins. Toxicity of the blooms cannot be determined just by looking at them.

Signs have been posted to warn individuals against contact with the water.

Avoid the following at Lake Cochituate:

The Massachusetts Department of Public Health will conduct follow-up sampling at the waterbody when there is no longer visual evidence of a bloom.

Natick’s Water/Sewer Division issued a drinking water notice (embedded below) to the public that stresses there’s no need to boil or avoid drinking the water.  Acting Town Administrator Jamie Errickson gave a heads up about this news at Wednesday’s Select Board meeting about 9 minutes into the Natick Pegasus recording.

This after discovering a sample of untreated water taken at the Elm Bank Wells on July 13 tested positive for E. coli, which yecch, is a fecal indicator. (We blame the ubiquitous Canada Geese, which we blame for everything.)

Natick has turned off the Elm Bank wells, which have been increasingly relied on during the town’s efforts to mitigate elevated levels of PFAS6, aka forever chemicals that were detected earlier this year. Natick recently approved spending $3M to install carbon filters to get rid of the unwanted chemicals, which through longtime exposure can cause health issues.

Natick disinfects the water it distributes to remove any fecal matter contaminants. The town is conducting more testing to make sure it isn’t letting anything sickening through to residents. It is also attempting to get its disinfection system certified by the state.

Great places to fish in Natick:

All of the above are stocked by the state with trout.

Pickerel Pond is also a great place to fish and hike.

Natick retailers such as Natick Outdoor Store and Dick’s Sporting Goods can get you fully outfitted for fishing fun.

Less than 7 miles from South Natick, you can explore an adult-, kid- and dog-friendly park that offers a mix of easily navigable woodland trails along the Charles River and an historic maze of old buildings once home to Medfield State Hospital staff and patients. 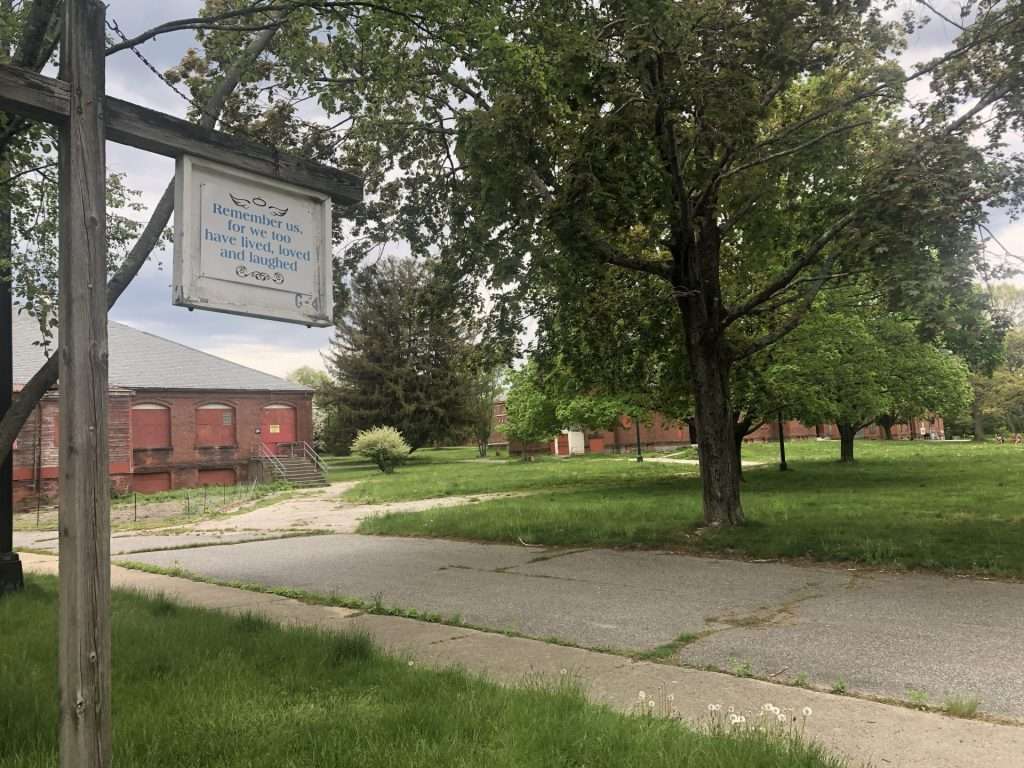 The current Medfield State Hospital grounds are open to public to roam, though could be in for a major redevelopment depending on the proposals that the town of Medfield receives and how residents vote, likely in the fall. Affordable housing, a cultural center, and historic uses could be in store for the 128-acre property and dozens of buildings (all of which are currently off-limits to the public).

We dropped by last fall and again on a warm May Saturday, and enjoyed our visits both times.

This time around we found the woodland trails and paths among the buildings to be peopled (and dogged) but not at all crowded.

Plenty of parking is available, and we recommend driving a little further than you think you should once you enter the grounds off of Hospital Road. You can get up close to a river and meadow overlook, the trail entrance, and the buildings.

We took in the sounds to start. Gunshots from a nearby (but far enough away) gun club. The buzz of model airplanes from a bordering model airplane club site. Closer still was birdsong, which eventually drowns out the other noise.

We busied ourselves for an hour-plus on the trails, of which there are about 4 miles’ worth, and later for a sit-down picnic among the boarded up brick buildings. The psychiatric hospital operated for more than 100 years, closing in 2003.

The trails start off wide and flat, suitable for a stroller, but after a spell get narrower and steeper. Ferns, blueberry bushes, wildflowers, and more surround the trails. A mix of trees, from tall pines and oaks to scented apple trees, shade the trails, while glacial erratics and outcroppings overlooking the Charles add variety. 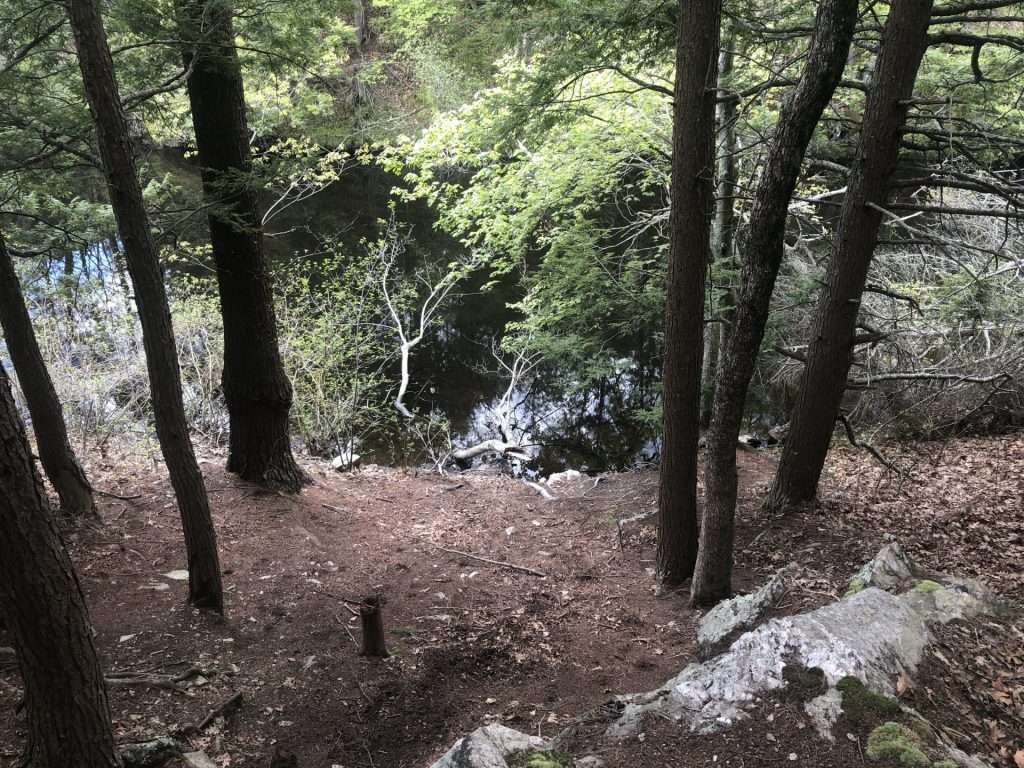 We took the Charles River Trail and looped back, eventually hitting the Steering Wheel spur that ended uphill and dumped us back near the parking lot. We came across a doggie playdate in a clearing, too. 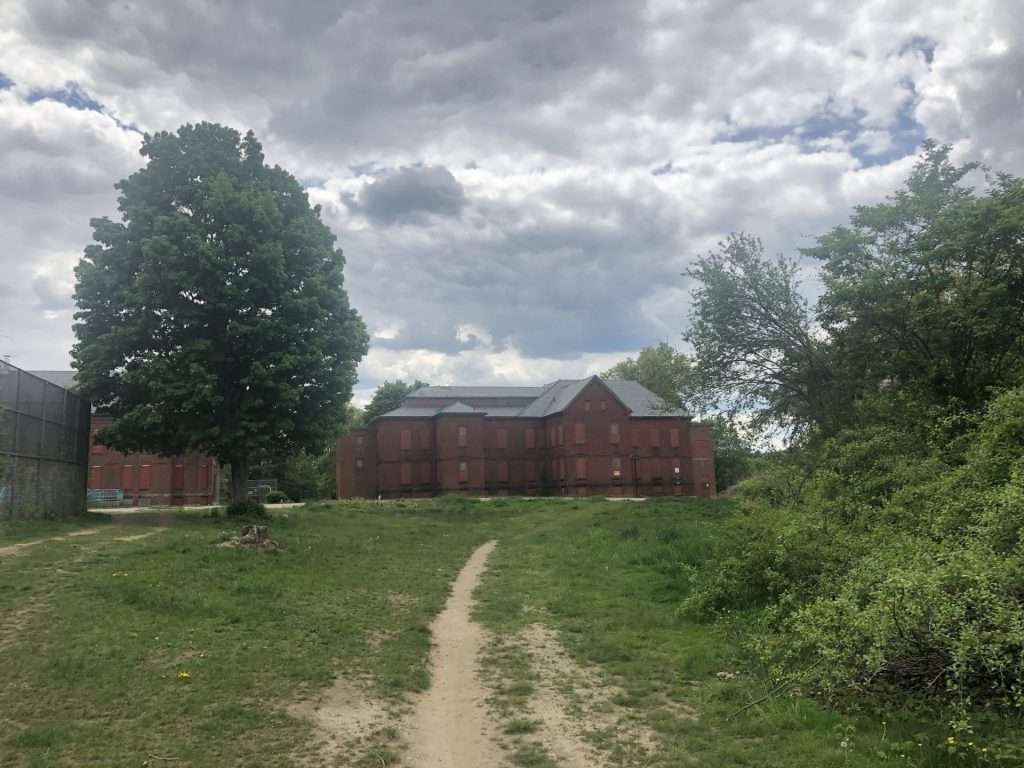 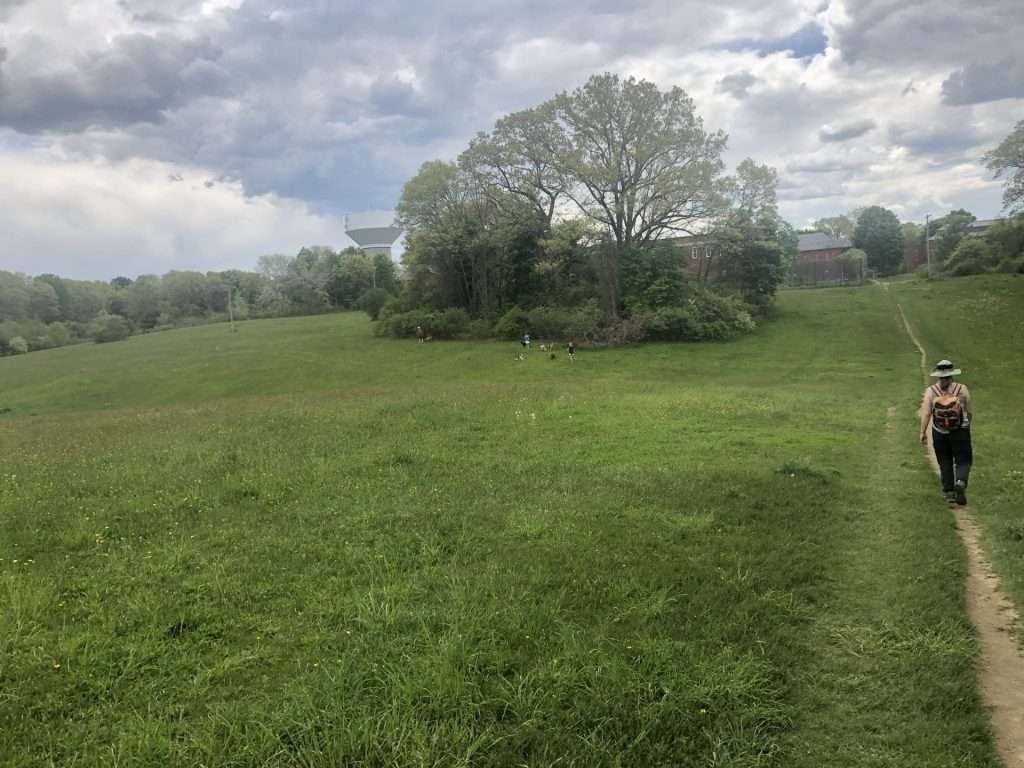 We then ventured to the old state hospital site, which has an eerie but cool feel with its fenced off and boarded up buildings, warning signs affixed liberally. The site has served as a movie set for films such as Shutter Island, New Mutants, and Knives Out, and also is the site of pop-up drive-in movies. During the day, families stroll and bike, and people walk their dogs (must be leashed). 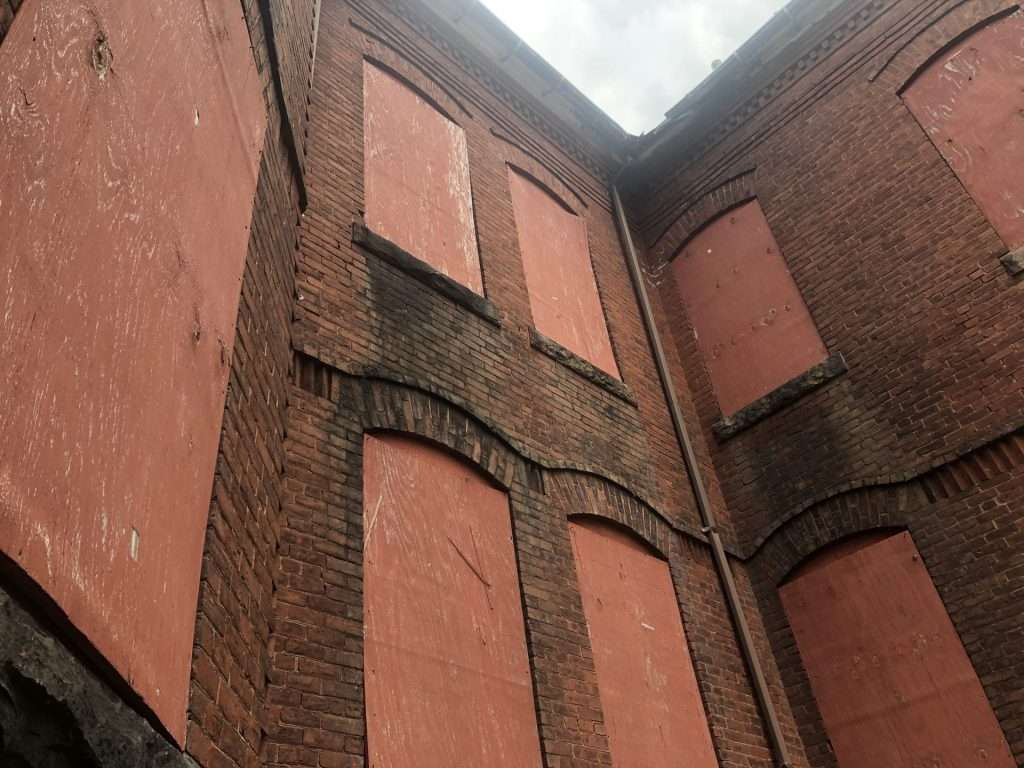 We shot a few hoops on a rusty old and shaky rim, which hovered over a handful of community basketballs. We had our lunch perched on the steps of one of those buildings you’re not allowed to enter.

The future use of part of these grounds for a cultural center is foreshadowed by a mural in progress, a poetry project, a Little Free Library that specializes in diversity books, and a crowded garden. 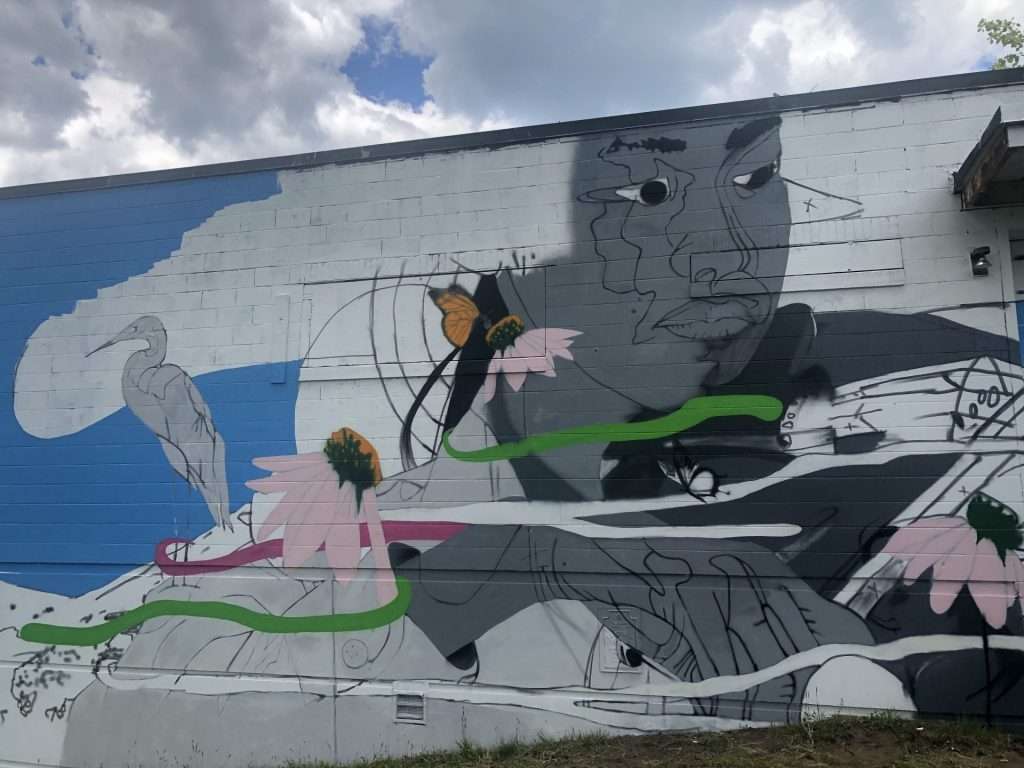 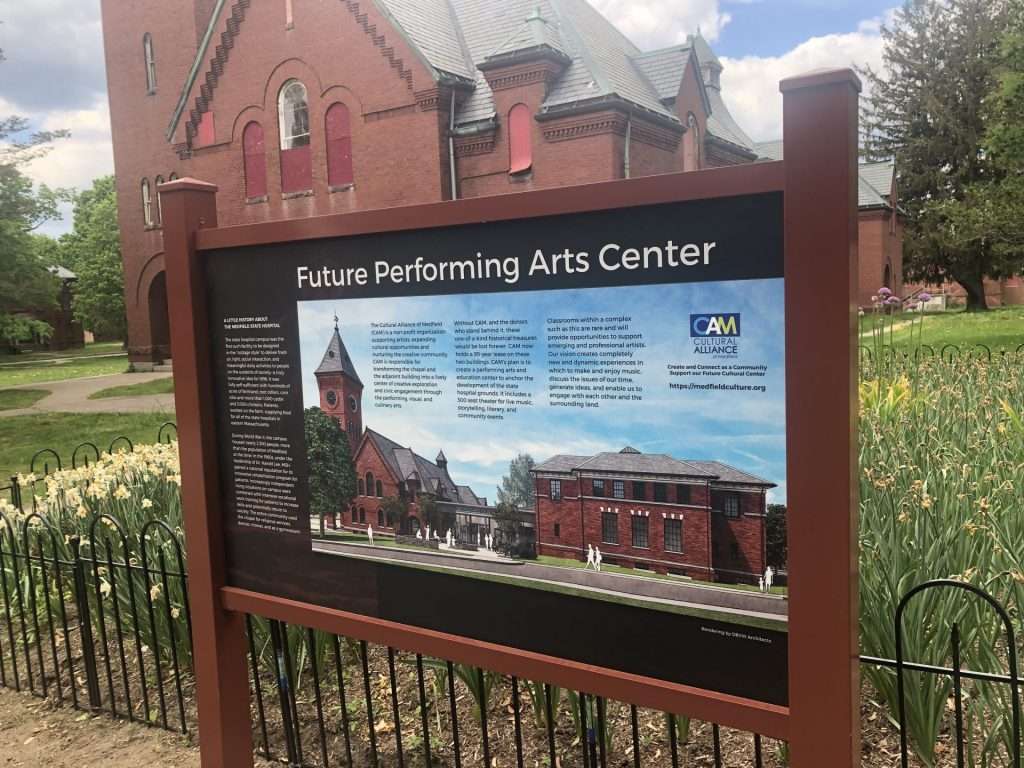 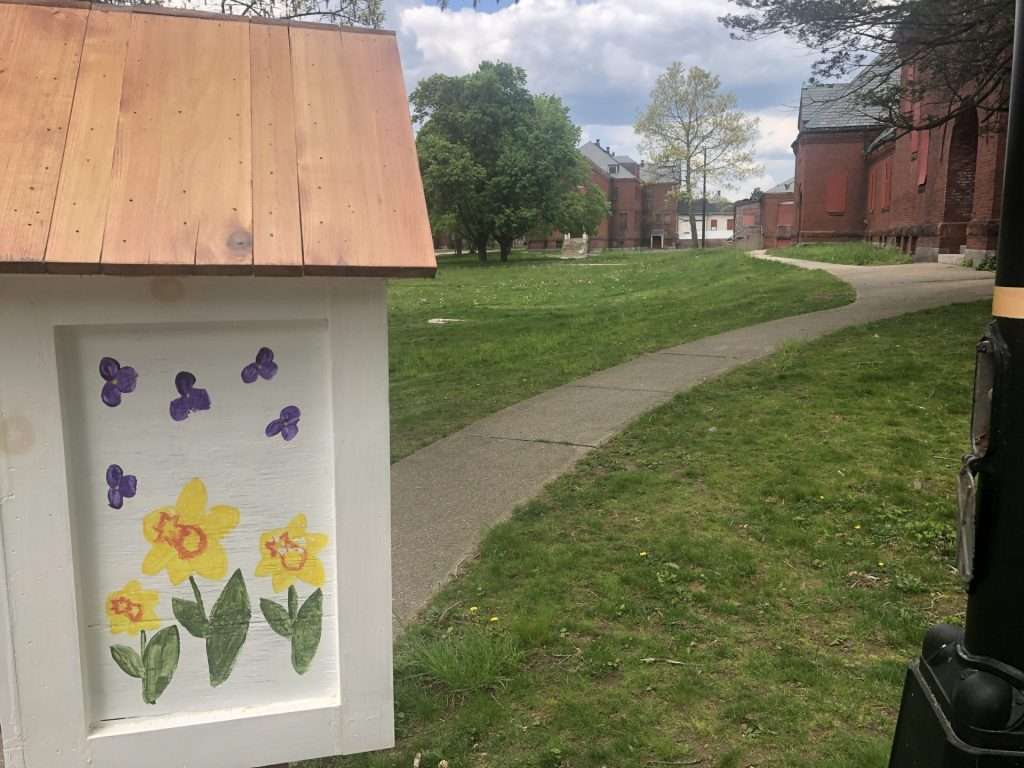 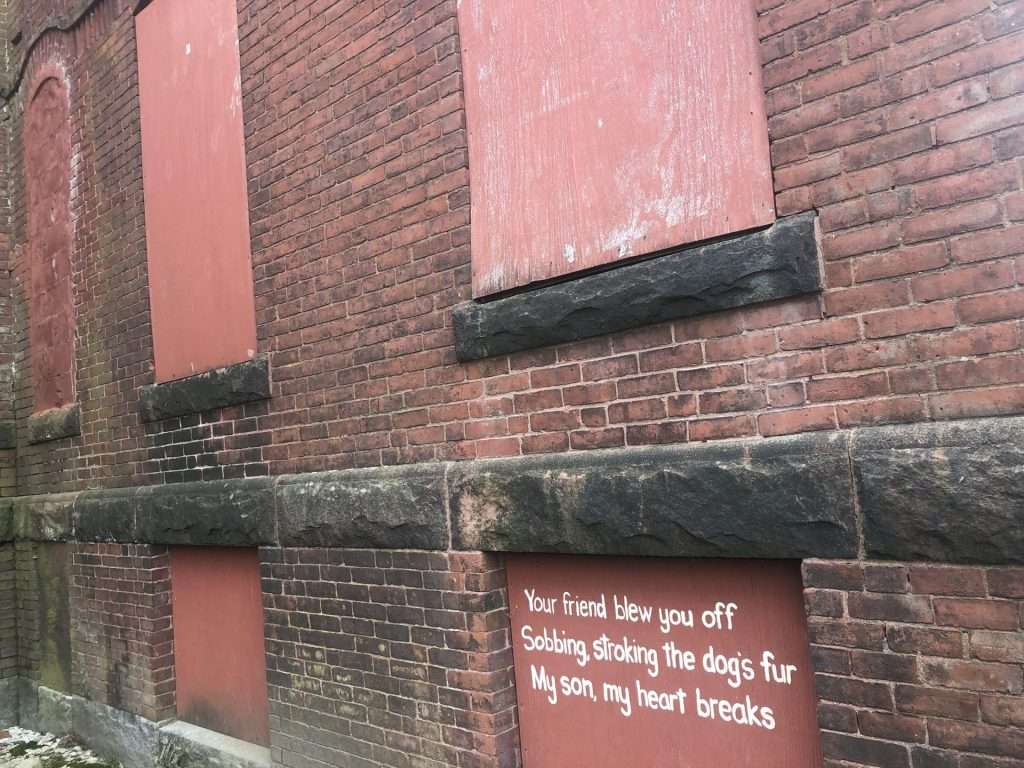 Across the road from the old medical facility are sports fields, and on Wednesdays-Saturdays, a pop-up BBQ joint called Pollard’s Texas Que, in case you prefer to grab something to eat there rather than bring your own. 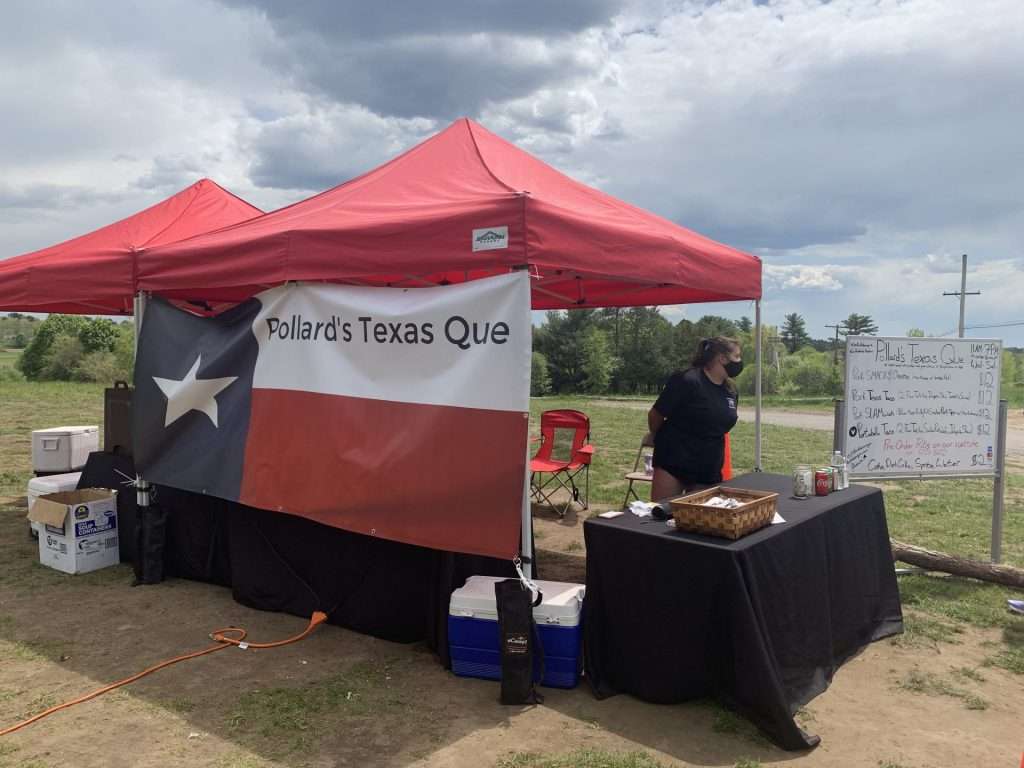 Any redevelopment of the old Medfield State Hospital grounds is still a ways off, but we suggest paying a visit soon so that you’ll be able to compare the before and after.

So maybe this pandemic pet boom is a real thing: With 3,025 licensed dogs, Natick has about 325 more this year than a year ago.

And perhaps owners have started to branch out with their dog names based on our review of this year’s list of top names. The same names are at the top of the list, but their numbers haven’t generally grown.

Bella is number one, as the name for 40 pups across town. Last year, Bella and Lucy tied at 43 apiece, and this year 39 Lucys are on the list. So it doesn’t seem as though there has been an influx of either.

(Note that alternate spellings of dog names can mess with the perfection of our highly scientific analysis….)

The rest of the names on the most popular list remain pretty much the same from a year ago, though the number of dogs named Luna rose from 23 to 30. Not sure I’ve actually ever met a dog named Luna.

Top Names (# of dogs with that name)

As for breeds, Labrador Retrievers remain #1 with 477 licensed ones in town, followed by mixed breeds at 448.

Beagles have been bumped from the Top 10, while Cavalier King Charles Spaniels made the cut. Anything with “doodle” in its name is on the rise.

Among the rarest breeds, with only one apiece in Natick, are the Toy Fox Terrier, Pharaoh Hound, and Mountain Feist.

Top Breeds (# of breed in town)

We invite you to dive into the entire list embedded below and let us know of any big trends we’ve missed: natickreport@gmail.com

Overall, the split between male and female dogs is about even in town.

All dogs 6 months of age or older must be licensed with the Town Clerk’s Office. Licenses must be renewed annually by March 1, and failure to do so will result in a $50 late fee. Failure to license a dog shall be punishable by a fine of $100.

The license fee is waived for residents over age 70 and for service dogs.

Thanks very much to the Natick Town Clerk’s office for sharing this data with us!