Got tips on business openings, closings or whatever, feel free to email us here: natickreport@gmail.com

Mexicali up next for outdoor dining

Mexicali Cantina Grill on Rte. 135 in Natick is up next to seek Select Board approval for serving food and drinks outside.

The outdoor dining area will be both on the grass in front of the restaurant and in the two parallel parking spaces to the side of the building. The proposal will permit space for up to 32 diners at 8 tables placed 6 feet apart, according to the application.

Lookout Farm looks to be asking for additional outdoor opportunities as well.

Sur la Table to close, and other Natick Mall news 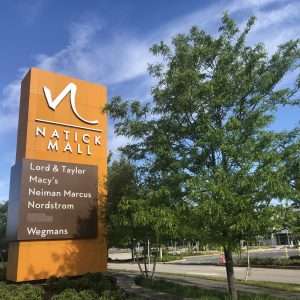 , the high-end cookware shop in the Natick Mall and other locations, has filed for bankruptcy. The Natick store is open for now, but if you want to get the last of the goods, you’d better get in there soon. In a phone call to the Route 9 shop, a rep couldn’t give me an exact closing date, but said they would remain in the mall “until everything sells.”

That will likely translate into an August or September time period. We’ll dearly miss the place that provided us with kitchen things from slotted serving spoons that never bent, to Le Creuset cast iron pots, to dishtowels. So many dishtowels.

Sur La Table has other nearby locations at The Mall at Chestnut Hill; Copley Place in Boston; and the Burlington Mall.

Neiman Marcus, another Natick Mall tenant, has also filed for Chapter 11 bankruptcy protection. No word yet on the status of its Natick store, which a voice recording says is “open by appointment only”.

Other big name retailers that have filed for Chapter 11 bankruptcy protection and that have Natick Mall stores include Brooks Brothers (“temporarily closed” according to a voice recording); J. Crew (they’re open at the mall); and DavidsTea, which Boston Eater reported will close all 42 of its United States stores (an internet search says the location is “temporarily closed”).

Uni-T, which describes itself as a combined art gallery, T-shirt and gift shop, has closed the Natick Mall shop it started in 2012 and is planning to open later this summer on Court Street in Natick Center. Multitalented owner Eujin Kim Neilan features her own illustrated children’s books, hand-printed T-shirts and other creations, plus those of other local artists. Dance, music and book readings are among the sorts of events Uni-T has held in the past. 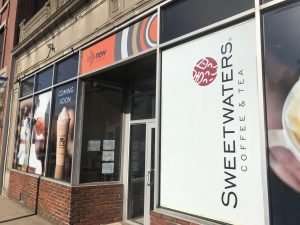 Sweetwater has about 40 locations throughout the United States. 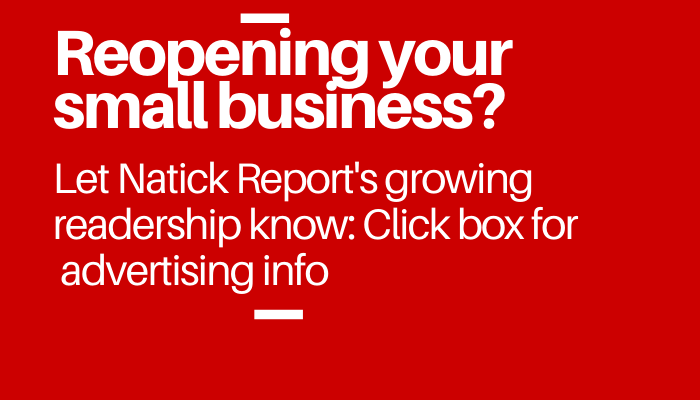 The Natick Select Board next week will consider applications from Agostino’s, Oga’s, Hampton Inn/Skybokx and Kells for outdoor seating at which they can serve booze.

Agostino’s bid would be for up to 40 diners at 10 tables placed 6 feet apart as part of the downtown Natick plan to use sidewalks and street space to create an al fresco spectacular complete with lights and art displays. 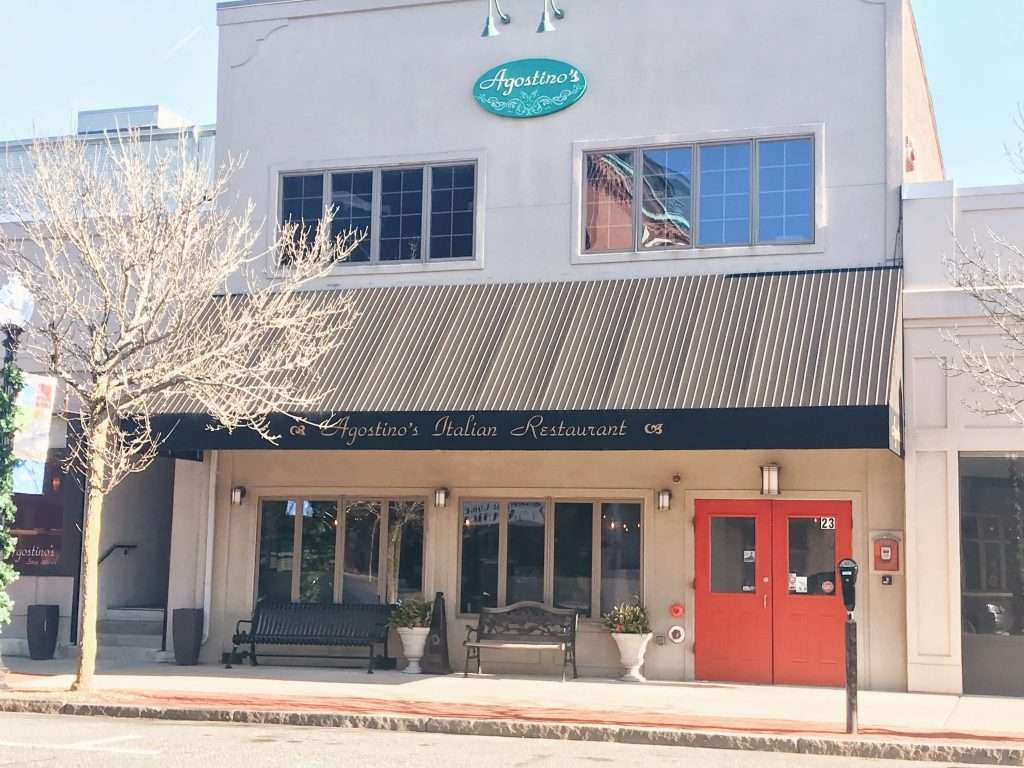 Oga’s Japanese Cuisine on Rte. 9 west seeks to create a temporary outdoor dining area in the grass area next to the restaurant. The proposal will permit space for up to 24 diners at 6 tables placed 6 feet apart.

Skybokx looks to create a temporary outdoor dining area on the sidewalk/patio area in front of the restaurant. The proposal will permit space for up to 23 diners at 5 tables placed 6 feet apart. But what about the TVs…in case pro sports really do return?

If approved, these proposals, plus one from the Kells taproom and brewery downtown, will join the likes of Dolphin, Trend and others that have been given the town’s blessing to expand or begin offering outdoor dining service with alcohol.

I could barely look at the Microsoft Store at Natick Mall when I’d walk by to make the occasional Apple Store visit right next door. While the larger Apple Store would almost inevitably be bustling, if not packed, those poor Microsoft store employees in their bright blue shirts were largely just keeping each other company.

But cringe no more: Microsoft has shuttered its retail stores, so the one at Natick Mall won’t be reopening. “The company’s retail team members will continue to serve customers from Microsoft corporate facilities and remotely providing sales, training, and support,” according to a company press release, in which Microsoft says the closings will result in a $450M pre-tax charge.

It’s a bit tricky to figure out which other Natick Mall stores might be closing. The mall presents a list of stores that have opened and another broader list of stores with some marked as “temp closed.” But it doesn’t appear that the mall is marking any of the stores as “permanently closed.”

Separately, nutrition company GNC filed for bankruptcy protection and announced its “store optimization” plan—corporate speak for closing as many as 1,200 stores. At least so far, GNC’s Natick Mall location isn’t on the closing list.

Neiman Marcus, another Natick Mall tenant, has also filed for Chapter 11 bankruptcy protection. No word yet on the status of its Natick store, which remains closed due to COVID-19 concerns.

Other big name retailers that have filed for Chapter 11 bankruptcy protection and that have Natick Mall stores incude Brooks Brothers and J. Crew. No word on the status of those shops yet, though Natick’s wasn’t on the initial list of Brooks Brothers closings.

The Natick Board of Selectmen next week will consider a couple more applications for temporary outdoor alcohol service.

Trend Pure Asian Cuisine on Rte. 9 East is asking for additional outdoor seating, having already been approved for some this past week.

Natick AMVETS Post #79, which has a great hidden away spot on Lake Cochituate, also looks to serve alcohol outdoors as described this way in the application:

“Outdoor dining area on an existing open field on their property. The outdoor area will accommodate 84 diners at 14 tables placed 8-10 feet apart. The existing tables southeast of the building may remain. Alcohol service will be to 8 tables, 4 of which will be under an open sided tent and all of which would be within an enclosed area with the enclosure to be approved by the Natick Police.”

Giovanni’s on West Central Street and Lola’s on Main Street also have been approved for outdoor dining that did not include alcohol service.

Even as the state has given restaurants the go-ahead for indoor dining, Natick is moving ahead with plans for four new temporary outdoor dining areas along Main Street and Washington Street.

James Freas, the town’s community & economic development director, will present on the plan at Wednesday night’s Natick Board of Selectmen meeting (June 24). Safety and health officials have already given the plan a thumbs up.

“The four locations identified in phase 1 are intended to serve restaurants in the adjacent buildings. In each case, the Town will provide concrete and steel barricades that will serve to protect restaurant patrons from passing traffic. The restaurants are responsible for providing tables and chairs as well as operating/maintaining the spaces to keep them clean and compliant with COVID 19 restaurant requirements,” according to a document describing the plan.

Restaurants such as Comella’s, Agostino’s, Lola’s and Java’s Espresso Bar & Cafe are among the establishments along these stretches.

The next phase of the expanded temporary outdoor dining plan will add designated pick-up locations, consider partially closed streets, and work non-restaurant businesses into the mix.

Community & Economic Development has also scored a $5K grant to support a public art component to the temporary outdoor dining and business set-up. 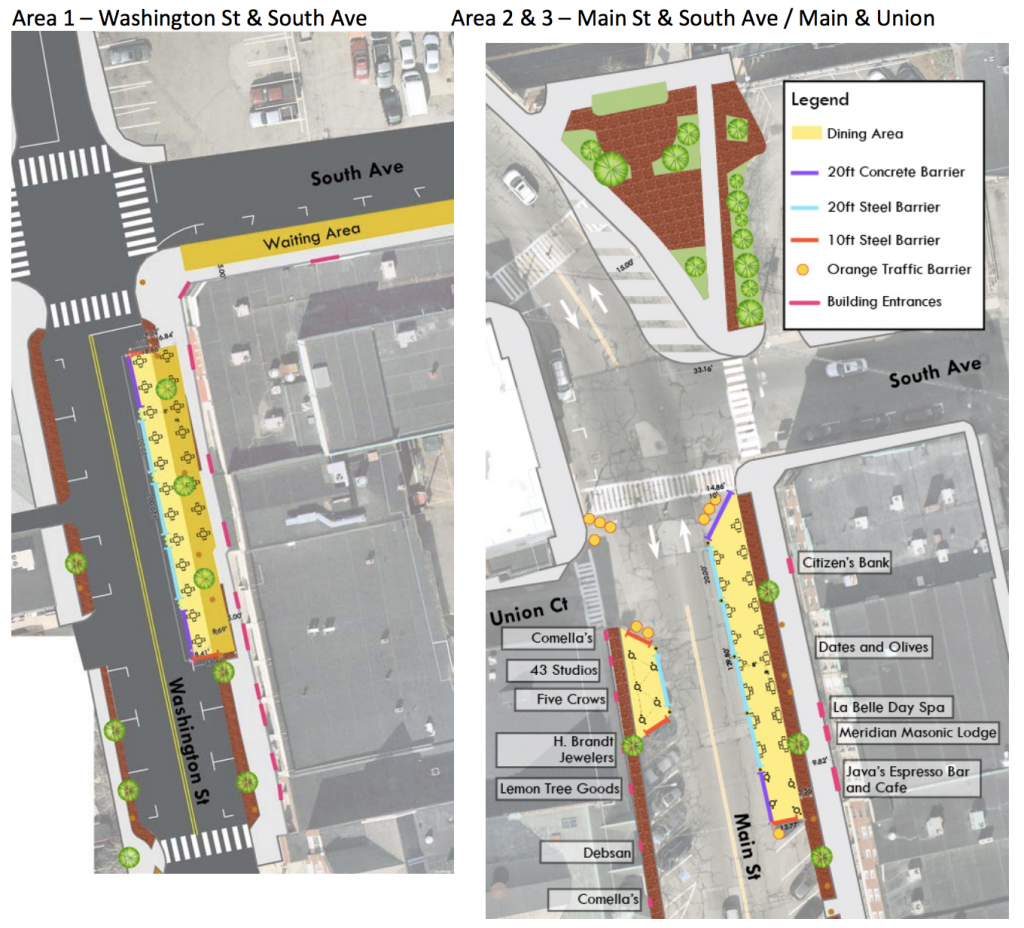 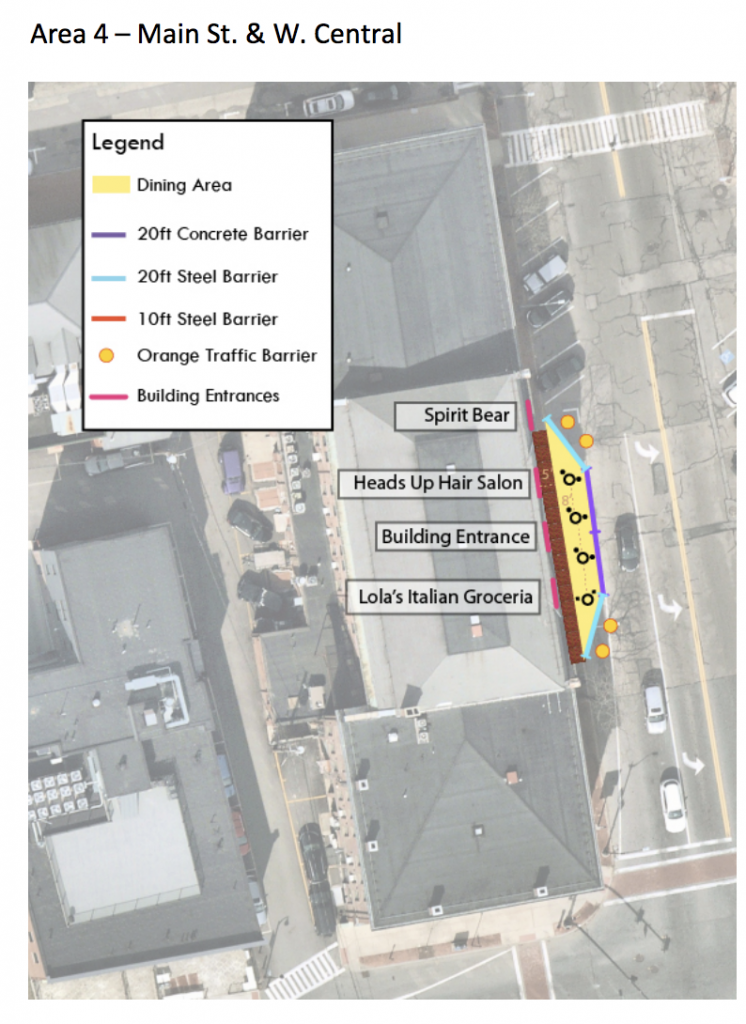