Tenet Healthcare, the for-profit parent of MetroWest Medical Center that can no longer bear declining use of its Leonard Morse Hospital in Natick, is looking to shut down emergency room and other hospital medical services by Oct. 25.

So say the sandwich boards at the hospital’s Union Street entrances. 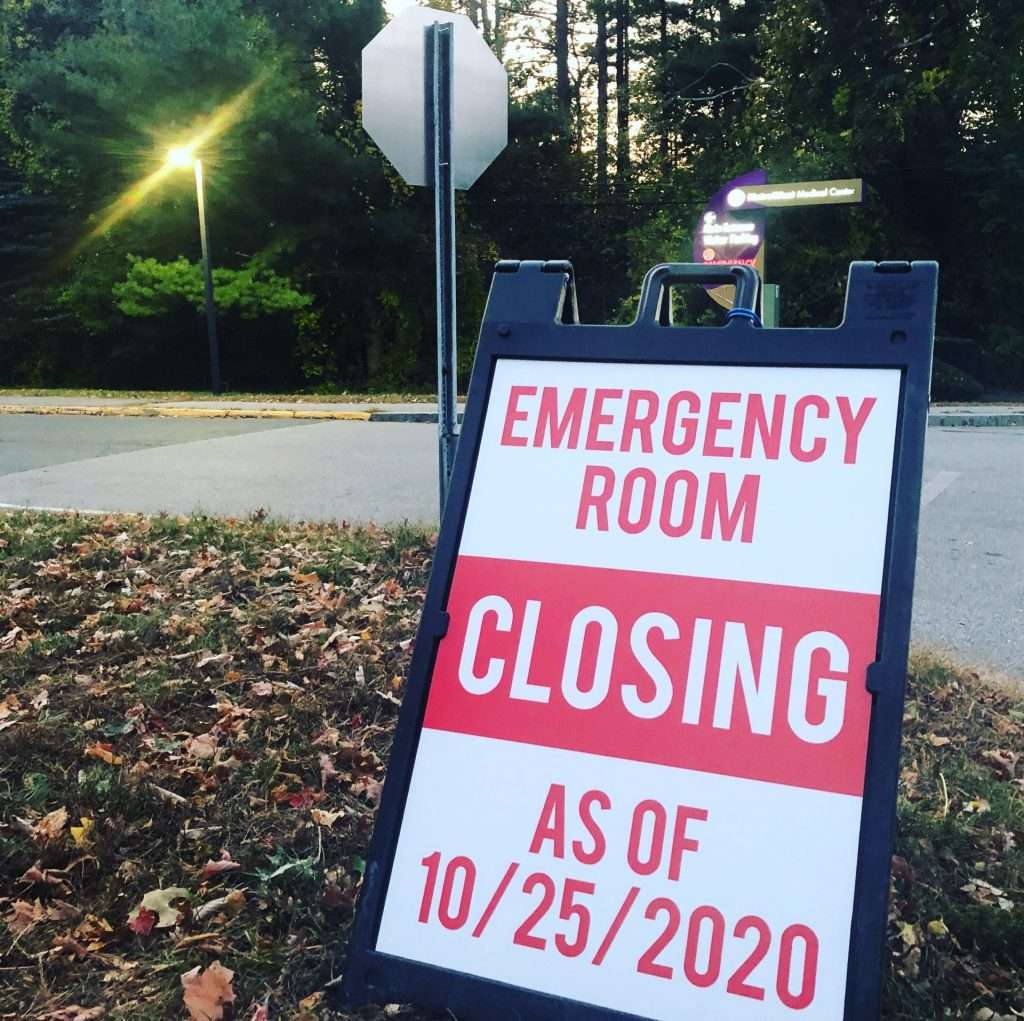 And so says the healthcare company’s lawyers in notices sent to the state’s Department of Public Health (DPH).

Tenet initially looked to shutter the services in Natick in May, but COVID-19 had other plans, so a postponement was announced in March. Now Tenet is barreling ahead in its efforts to divert patients to its Framingham facility about 6 miles away, or to various urgent care and other offices in the area. Psychiatric and other behavioral services will remain on the Natick campus and be expanded under the plan, which points out just how darn close the Natick and Framingham hospitals are to each other, traffic be damned.

The Massachusetts Nurses Association is opposed to the change.

Mass DPH, in a response dated Oct. 5, still has a few things it would like MetroWest Medical Center to address by Oct. 15 before getting its blessing.

In general, DPH wants to know how things will be handled in Framingham if demand that was stifled by COVID-19 concerns rises, and what impact all this could have on ambulatory services, among other things:

Leonard Morse Hospital’s history in Natick dates back to the very end of the 19th century.

Thanks to LINX for sponsoring our weekly round-up of the latest Natick, Mass., business news. In this unprecedented time LINX has built outdoor classrooms and is using Elm Bank Reservation fields so that children can continue to have the in-person learning experiences they need and want, while staying safe. True to its mission of providing the best classes experience for each member of every family, LINX has created new classes for remote school students, pandemic pods, micro-schools, and temporary homeschools!

Natick’s Economic Development Committee has an online meeting slated for Thursday, Oct. 8 beginning at 8:30am. Agenda items include the latest on micro-enterprise grants available to small Natick businesses, plans for a new microsite on Natick economic development, and an update on business closings.

The Pond Street indoor cycling studio unfortunately has closed and is selling off equipment. For more info: natickcycle@gmail.com 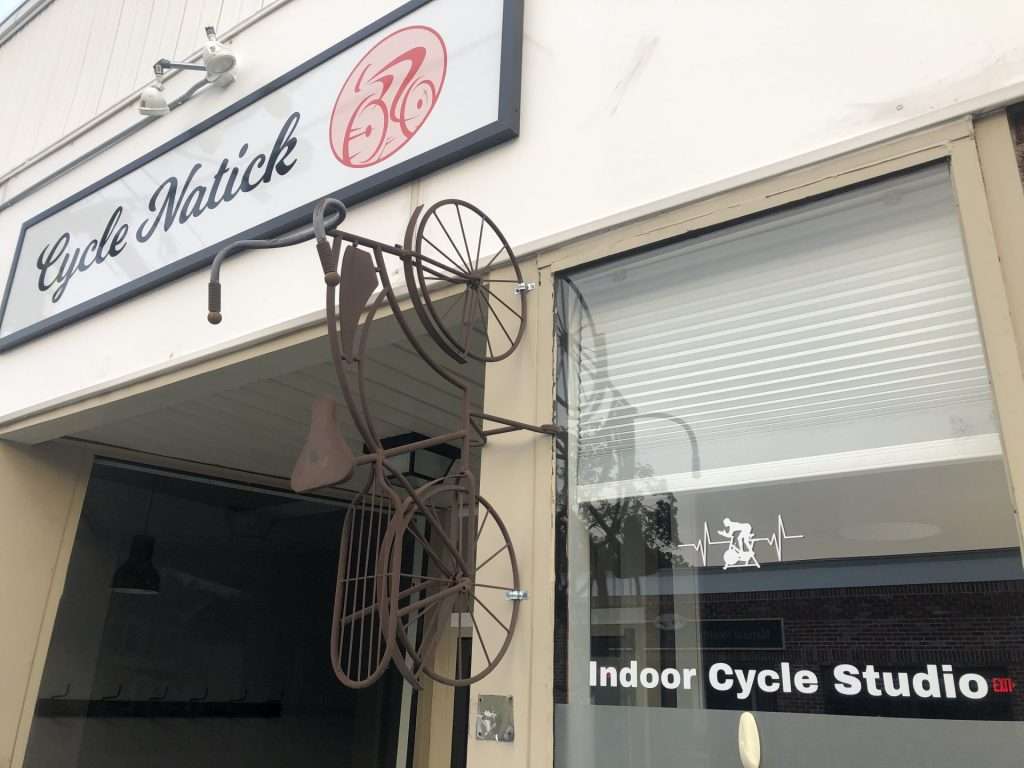 Summer Street Laundry has closed its doors permanently, according to the owner.

Coincidentally, our washing machine broke a day after we spoke to him, and we found ourselves paying a visit to Natick Laundry Central on East Central Street. 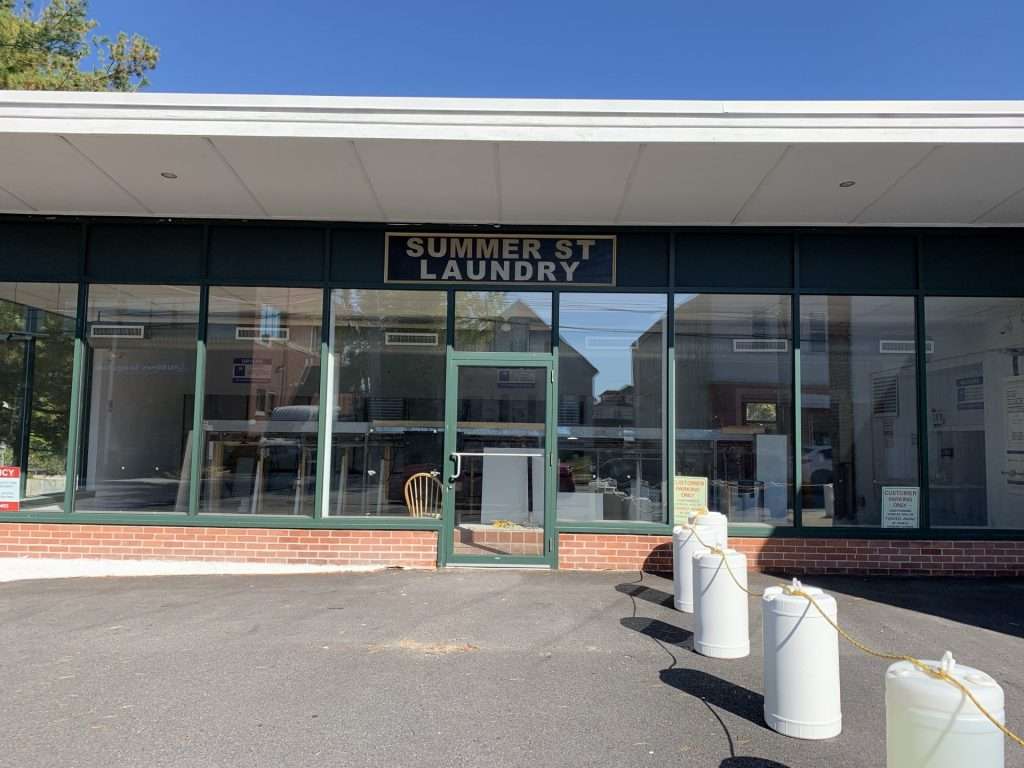 Presentations from the three candidates for two recreational marijuana licenses in Natick have lots of information in common: They lay out education plans, intentions to hire locals, building security efforts, product safety procedures, and more.

They also emphasize plans to contribute to the community, both in terms of the mandatory tax on revenue that will go into Natick’s coffers, and a portion of proceeds that will be donated to nonprofits.

Given that the vote among Natick residents a few years back in favor of recreational marijuana facilities was fairly close though, we wondered how willing nonprofits might be to take money from the new cannabis shops out of concern about offending patrons or clients, or keeping with their own missions.  The Worcester Telegram & Gazette reported at the start of this year that marijuana shops in that area sometimes found it hard to find takers.

But with the emergence of COVID-19 since then, and the impact that has had on donations to many charities, you might expect organizations to think more broadly about what’s acceptable to them at this point. Especially given that these are legal businesses.

Revolutionary Clinics, one of the candidates for a recreational marijuana shop in Natick, lists several organizations, including Town of Natick Veterans Services, among its target donation destinations. It says in its recent public presentation that this could add up to $30K per group between donations and volunteer work, with more in the offing depending on how well the business does if it gets chosen.

“These organizations were very appreciative and willing and able to accept donations,” says Keith Cooper, CEO of the business, which has other locations nearby in Cambridge and Somerville. “Especially in these times, real, reliable and repetitive annual funding is crucial to organizations like these.”

We reached out to Natick’s Community & Economic Development office to ask what they’d been hearing about the willingness of local charities to accept donations from these newcomers, but haven’t heard back.

Perhaps not surprising in that this could be a touchy topic for the town, which stands to reap serious tax revenue, and charities. The Natick Service Council, which was ID’d as a potential donation target by at least two of the original eight candidates for recreational cannabis shops in town, hasn’t responded to our inquiry either.

For others, whether they would take such contributions remains to be seen.

Natick 180, which was identified by at least one of the original recreational marijuana shop contenders as a donation target, does not have “an express policy at this time specifically regarding potential adult use cannabis donations,” says Katie Sugarman, Prevention and Outreach Program Manager/Drug-Free Communities Grant Program Director at the Natick Health Department. “Any proposed contributions from a local business or community organization must be brought to Natick 180’s Steering Committee for consideration,” she adds.

Daivid Lavalley, executive director at TCAN, says “Our decision to accept such a donation from a legal business entity is always done after considering possible conflicts with our mission and bylaws.”

So while he didn’t directly say TCAN would be open to a donation from any specific recreational marijuana shop (Revolutionary Clinics cites TCAN as a potential target in its presentation), Lavalley did say that as a nonprofit with a large regional audience, TCAN regularly attracts unsolicited donations from new businesses.

“This is a pretty common and legal marketing practice across the nation–the business not only receives a tax deduction for their gift, but news of the donation (and the new business) spreads to the constituents of the nonprofit,” he says. “Nonprofits like TCAN depend on contributions for their survival, so they benefit as well.”

In recent years TCAN has received donations of this sort from the likes of Avenu at Natick, Needham Bank, Bill’s Pizzeria, and Total Wine & More.

Friends of Natick Trails (FONT), a nonprofit launched in 2016 to support the Cochituate Rail Trail and Natick’s expanding trail network, is another candidate for donations from the new cannabis businesses.

“Friends of Natick Trails takes no position on the license application process itself, but was pleased to learn that we were among the Natick non-profits that Revolutionary Clinics has committed to supporting,” says John Gregory, president of FONT, which is preparing to launch major fund-raising initiatives in support of the new Cochituate Rail Trail. Among those efforts:  the sale of custom-engraved paver bricks and the sponsorship of amenities such as benches along the new trail.

Now those sound like benches you could really relax on…

The latest change in Natick Center involves the leaving of Spirit Bear, the yoga studio at 19 Main St., that’s been in operation for more than a decade, and the pending arrival of Baylee, a shop that touts its “cozy, comfy clothing.”

Spirit Bear’s Christy Carlson says the 14-foot requirement for spacing between patrons under COVID-19 rules proved untenable in the space.

My co-editor on Natick Report used to work for yoga at Spirit Bear back in the day, and has fond memories of the studio.

Perhaps Spirit Bear’s successor will at least continue the animal vibe at the space. Spirit Bear got its name from the Kermode Bears that live on the coast of British Columbia. Baylee uses a Bee logo on its sign, a reference to local Baylee Donovan, who is opening the shop with mom Debbie.

Natick Center is undergoing numerous changes, some COVID-19 related and some not. Sweetwaters Coffee & Tea just opened, and a new bagel shop is on the way. 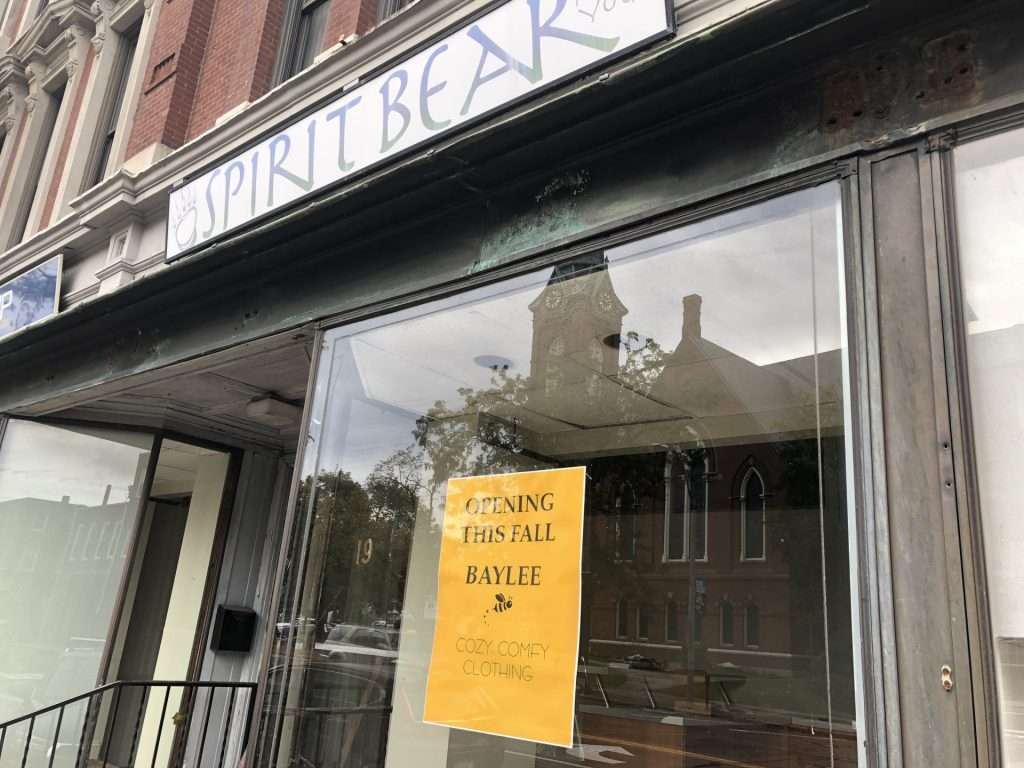 Our roundup of the latest Natick, Mass., business news.

Other items we should include? natickreport@gmail.com

Natick Mall’s Dave & Buster’s sports and arcade restaurant/bar is slated to reopen on Friday night, just in time for game 5 of the Celtics-Heat NBA game.

The business recently announced plans to whack more than 100 employees at the location, though said it would hire back those needed to operate when it reopens. Presumably, the facility will reopen with a more limited capacity to adhere to state pandemic rules, but the good news is that locals will have another place to go and at least some employees will be back in action. 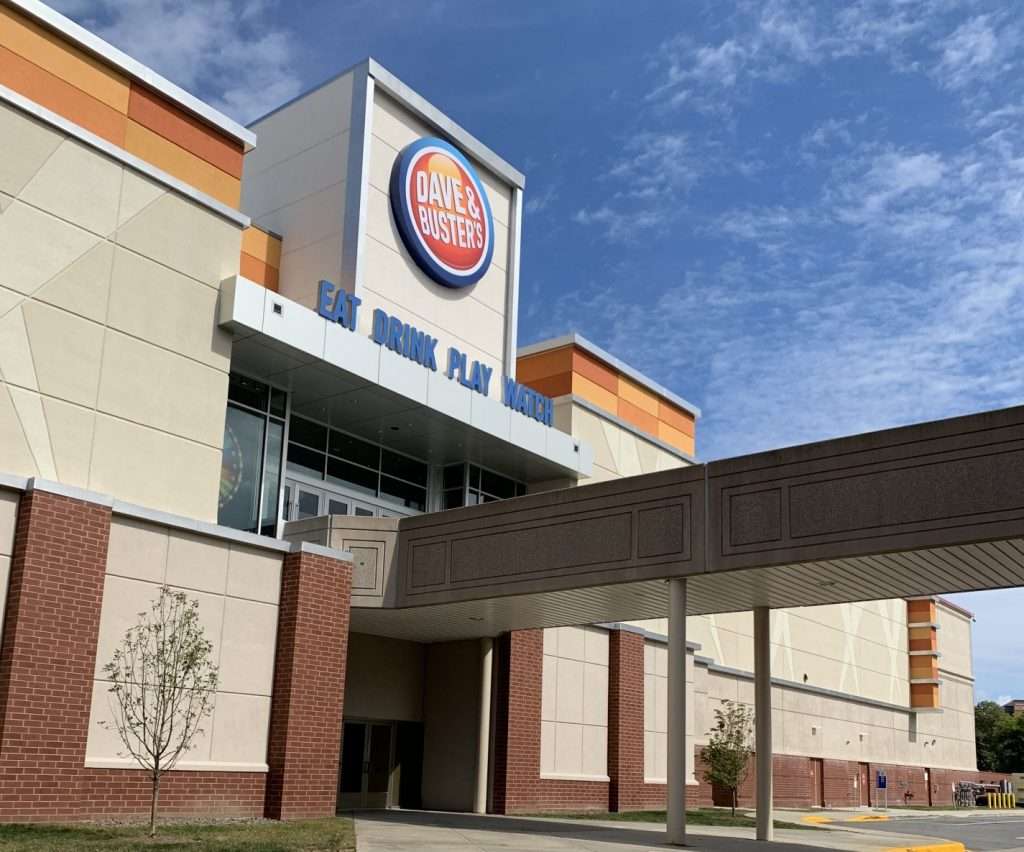 As obligated under federal law, P.F. Chang’s restaurant at the Natick Mall has alerted the town and state that up to 75 of its employees will continue to have reduced hours due to the pandemic’s impact on the business.

The restaurant is operating, but at reduced capacity. 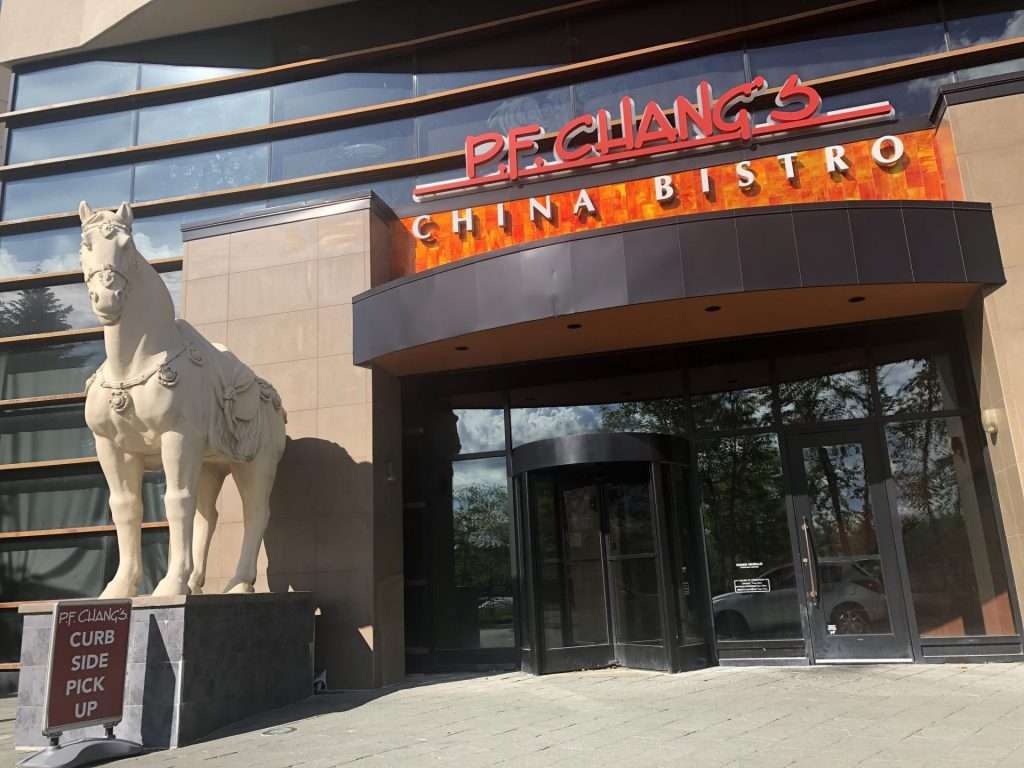 Sweetwaters Coffee & Tea has its grand opening in Natick Center on Saturday, Sept. 26.

It will get off on the right foot community-wise by contributing some portion of proceeds from the hours of 9am-3pm to the Natick Center Cultural District.

This will be the first Sweetwaters in Massachusetts. It has dozens of other locations across the country, with lots in Michigan (where it’s based) and Texas. 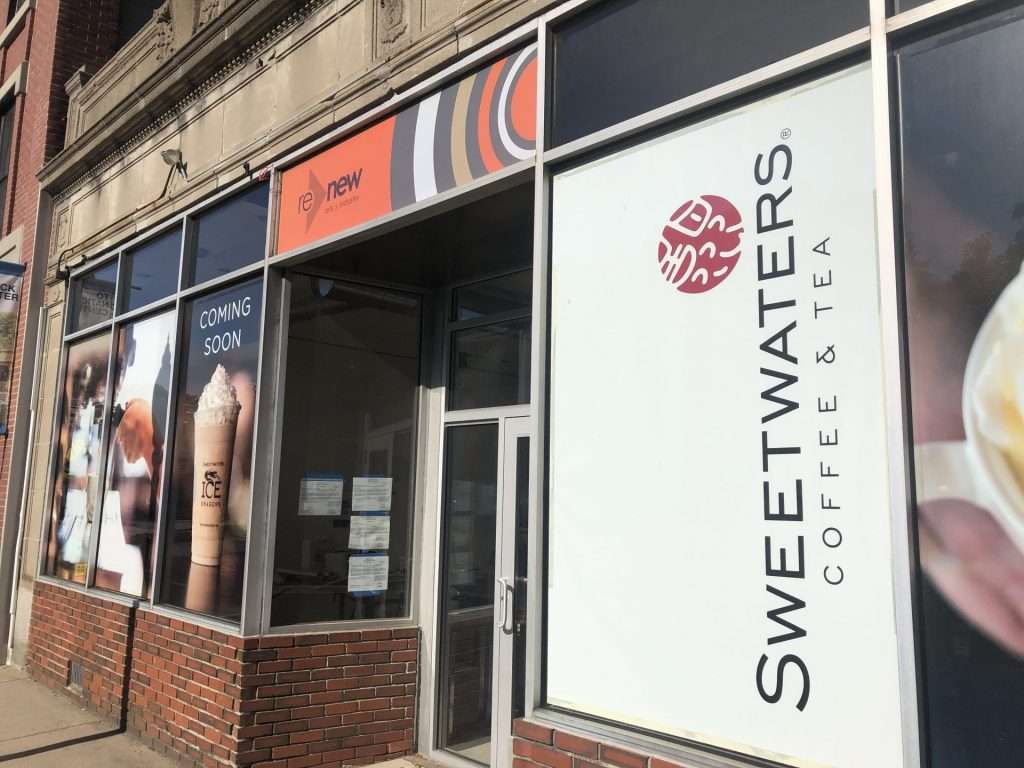 An adult day services outfit called Elder-Well has announced plans to open at a 1,500 sq. ft. space at 12 Washington St., in Natick in mid-October.

Services, provided daily between 8am and 4pm, and will include group and individual therapeutic and educational activities; health and wellness monitoring; community outings and presentations; breakfast, lunch and afternoon snack; gentle exercise programs; and more.

Foundation for MetroWest amps up fundraising

The Foundation for MetroWest has launched ONEmetrowest, seeking to get 1,000 donors by year-end to help it address needs among 33 cities and towns in the region. As of this writing, it had more than 200.

The foundation has granted nearly $3.5 million in emergency relief funds during the pandemic, supporting everything from food insecurity to personal hygiene.

Among other efforts, the foundation will offer a series of virtual town hall events to seek out diverse voices regarding what needs to be done to boost metrowest communities.