After a sedentary holiday season marked by multiple multi-course meals, we needed to get outside and spend some time in the bracing cold. During a contemplative walk at the Natick Community Organic Farm, we counted up the number of cookies we ate over the past few weeks and multiplied that by the number of Hallmark movies we’d watched. That equation added up to a wake-up call. Time to get back on the righteous path of healthy living. We’re now ready to step away from the wassail.

Here are some pics of our visit. 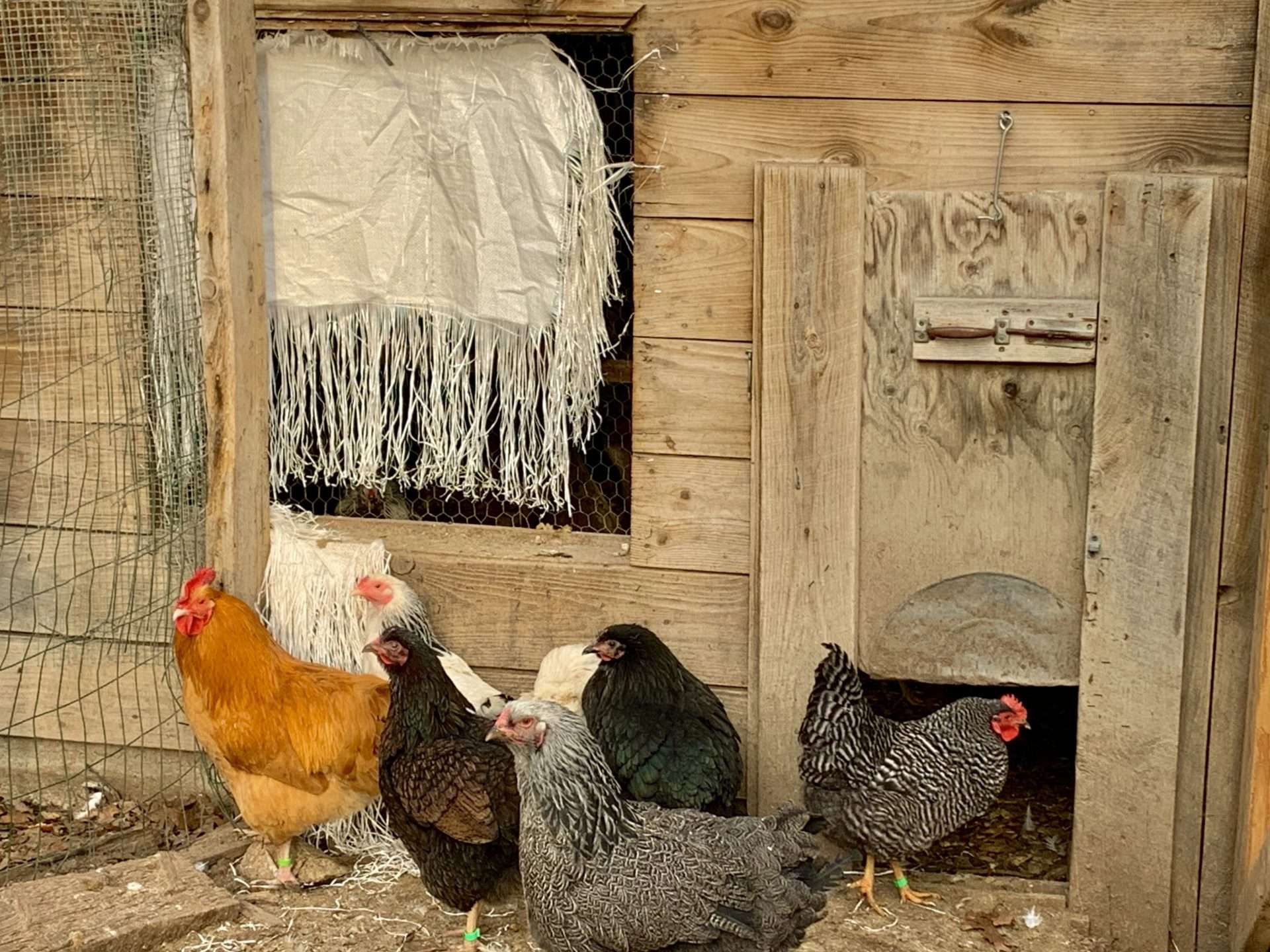 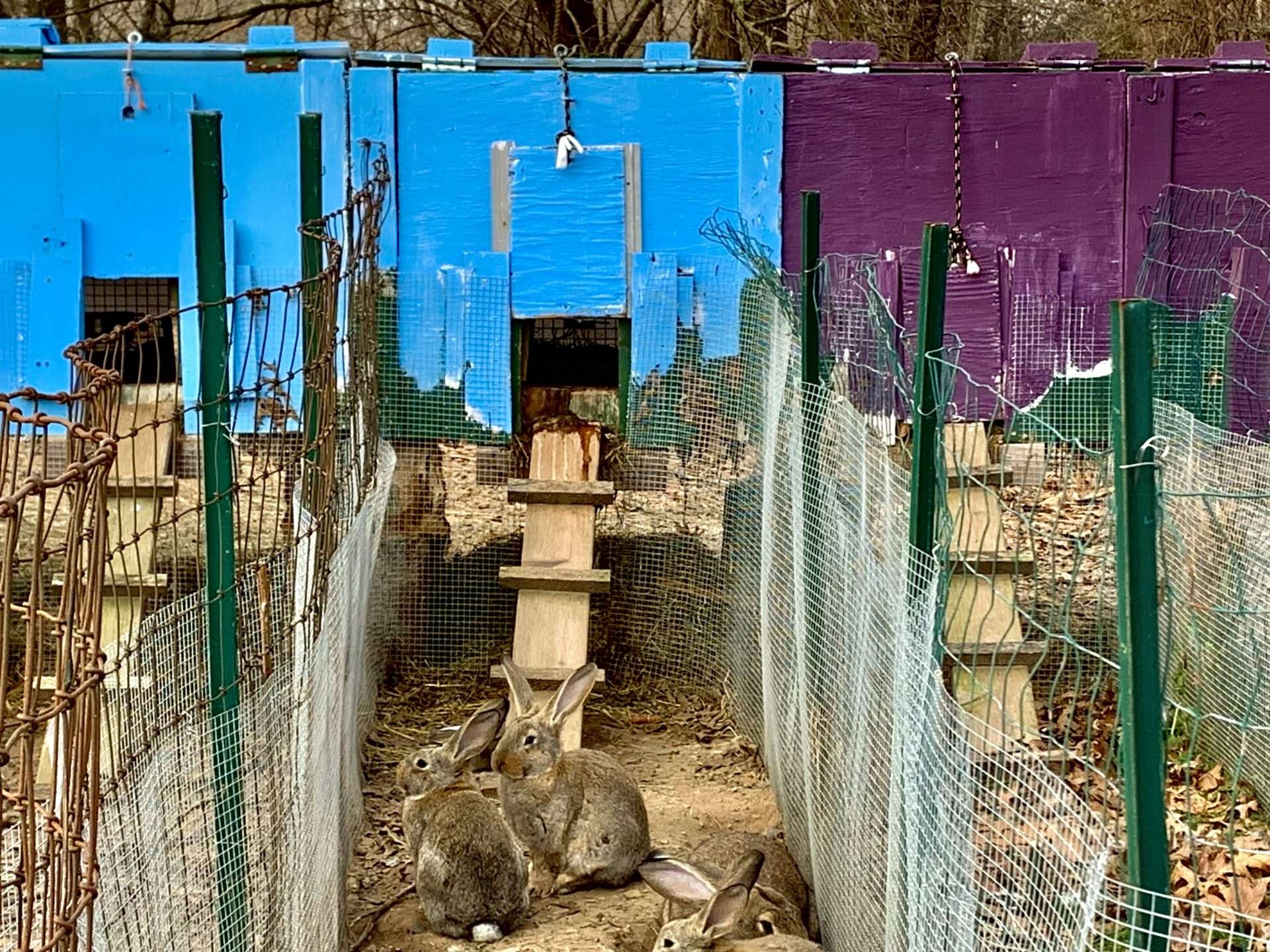 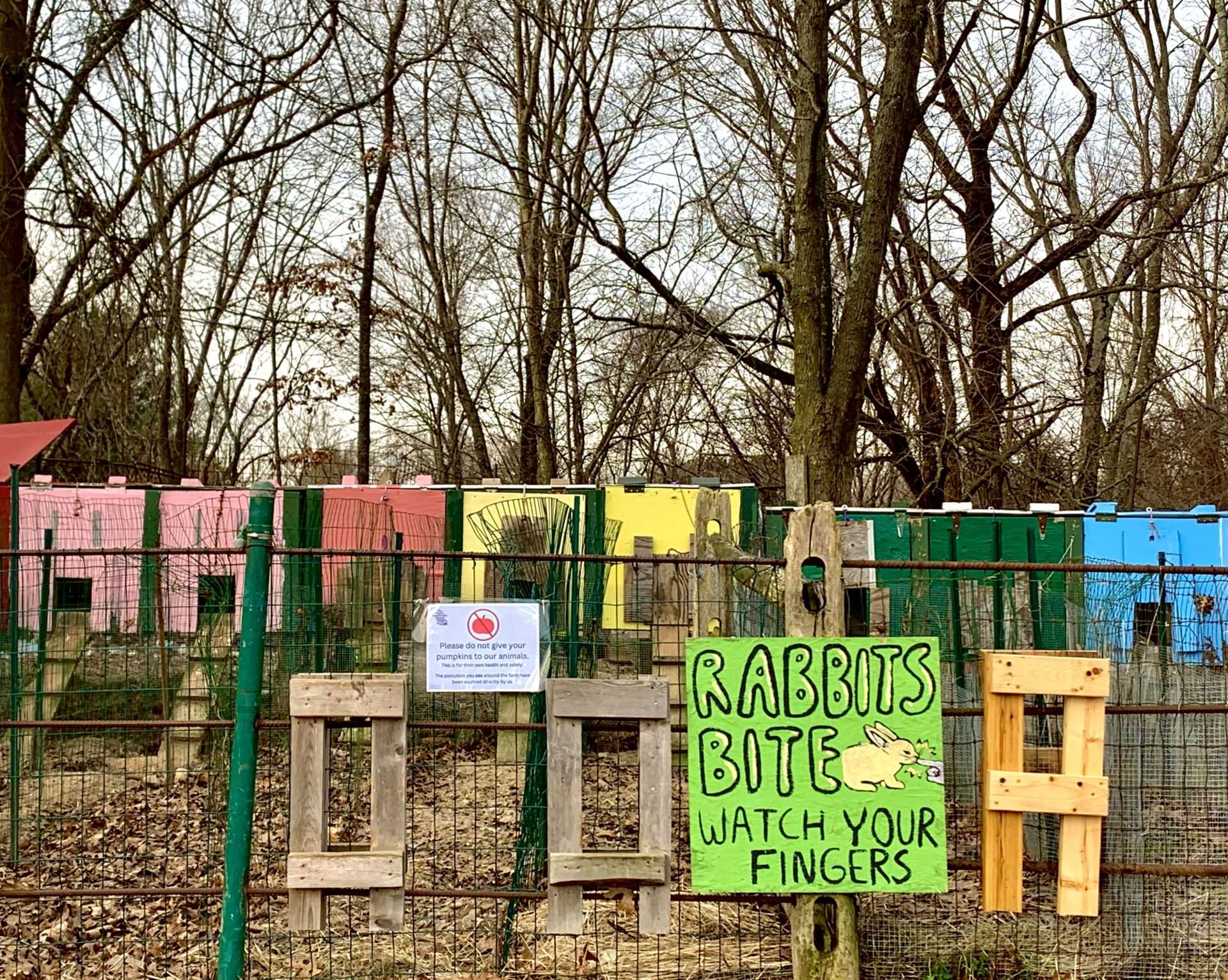 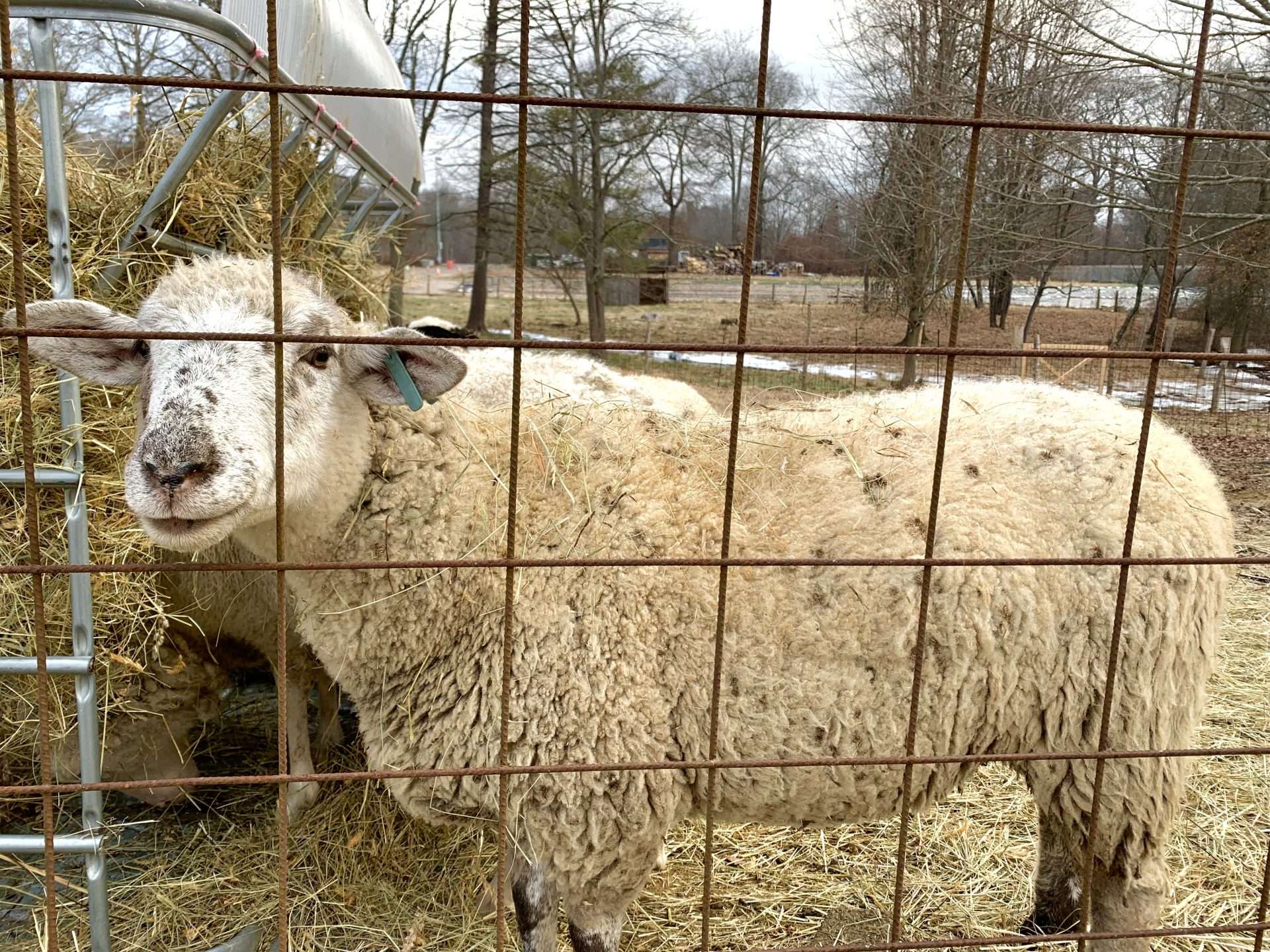 An update on the barn rebuild

Early in the morning of March 17, 2021 the Natick Community Organic Farm’s 200+ year-old barn burned to the ground. (You can see our story on the fire here.)

Since the event, the farm has been working to raise $1.1 million for a new barn with a state-of-the-art attached greenhouse.

According the the NCOF website, “Our architects have submitted designs, and as of September 2022, we have the permits in hand to begin building.”

We were lucky enough to get a tour of West Natick Fire Station #4 at 268 Speen St. when it was completed in July 2021. Michael Lentini, the fire chief at the time, walked us through the 17,000 square-foot station, showing off the brand-new ADA-compliant building and all its bells and whistles including the five double-deep apparatus bays; training areas; enhanced safety measures; and more.

Must see home-y details: the vintage EMERGENCY sign (try to guess where it was sourced from), and the Fight’n Fourth dining table.

Join the Natick Sons & Daughter of Italy for a Golf Tournament fundraiser to support necessary upgrades to the club’s 37 Washington Ave. kitchen. Phase 1 of the project is already complete. The Club replaced their aging stove with a brand-new shiny, modern model that can stand up to many more years of Wednesday Night Pasta dinners. Next on the punch list is the installation of fire prevention equipment. As you can guess, these are expensive but necessary upgrades. The Club hopes to have the project completed by fall 2022.

So play golf, and save Pasta Night.

Have never/can’t/won’t play golf? More of an armchair donor? Natick Sons & Daughters has you covered. You can make a monetary donation here. 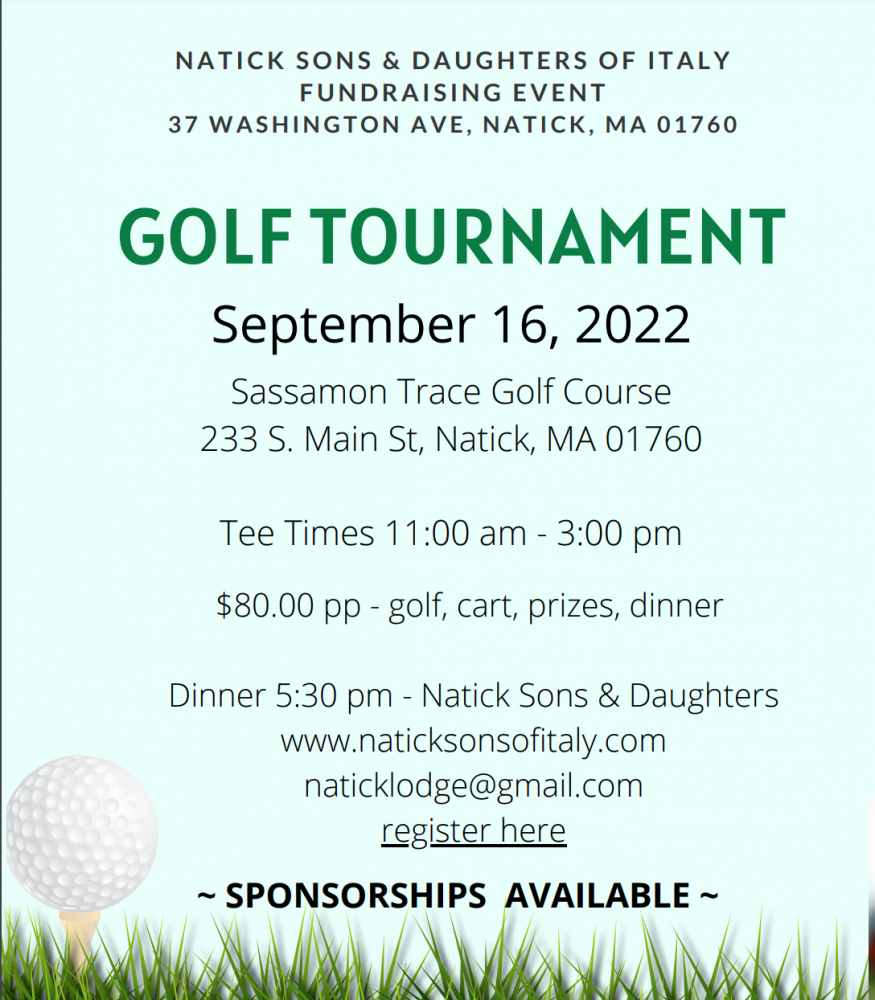 The last time we checked in on the Fairview Estates Roadway Improvement Project in February, the focus was on Natick’s efforts to get the entire neighborhood on board with street surface, sidewalk, and accessibility improvements. It made for a surprisingly colorful Select Board meeting.

We missed the sequel listed on the March Select Board agenda (and no minutes have been posted). But July 27  update at the Select Board meeting made for a compelling end to the trilogy, with a mix of satisfaction and disappointment for residents most affected by the project. Documents related to the discussion are posted on the town website, and we’ve embedded the 2022 roadway project plan below.

The main issue this time around was that some residents didn’t want sidewalks in a couple of areas, arguing that they aren’t really needed, could damage trees (or require tree removal), and cut into property. The town bid out the work to include these sidewalks, but had the flexibility to exclude them.

Jeremy Marsette, the Natick Department of Public Works director, described the work planned for the Fairway Estates subdivision northwest of Dug Pond and the skating rink as being part of the town’s annual roadway improvement project. A number of streets in the area have also been converted from unaccepted to accepted, making them eligible for more town services, with Town Meeting’s blessing. All in all, this is a good thing considering the rough condition of pavement on numerous streets (kudos to anyone who has ever roller-bladed here & survived), and an erratic sidewalk network that’s out of sync with the town’s Complete Streets program. In addition to the Select Board, the town’s Transportation Advisory Committee and Safety Committee reviewed plans.

“We can’t change everything, we can’t get make everything up to a 2022 standard, so we’re trying to do the best we can with this old neighborhood to make it as traversable as possible,” said Select Board Chair Paul Joseph.

All decisions in town have macro and micro angles—changes are generally made with the greater good in mind, but most directly and immediately have negative or positive effects on the day-to-day lives of a handful… you may find yourself no longer being able to do what you’ve always done.

In this case, residents on Fern Street in the middle of this neighborhood say there’s no need to extend a sidewalk all the way up their street (earlier this year some from higher number houses on Fern and elsewhere in the neighborhood had requested a sidewalk on this street, described in a letter as “one of the major thruways in the neighborhood.”). The lower number Fern Street residents who appeared at the Select Board meeting on July 27 emphasized that few cars travel that road—I apparently hit the jackpot in seeing two in the five or so minutes I was there around 5pm on Monday—and that installing a sidewalk would jeopardize trees on a shady stretch between Proctor and Moore Streets. This was shade that neighbors and Select Board Chair Joseph enjoyed while meeting about the issue over the weekend.

Among those asking the Select Board at its meeting not to approve extending the Fern Street sidewalk was Chris Bunn, who lives on that street and came prepared with photos of Fern and nearby streets. “This isn’t a cut-through… Probably the only reason why people drive on this road currently that don’t live on it is that they’re trying to avoid all the potholes on Windsor. Once Windsor’s paved probably you’ll see five cars a day leave to go to work and five come back,” he said.

Fellow Fern Street neighbor Greg Szilagyi said he had just done the rounds with a petition on Fern and surrounding streets, and found that some people changed their minds from being for the sidewalk to being against it or being neutral once they learned about the possible impact on shade trees. “They decided the sidewalk didn’t have enough benefits to outweigh the damage to the trees,” he said.

The Fern Street residents’ show-and-tells seemed to convince the Select Board, which approved the plan without the sidewalk on Fern between Proctor and Moore. However, despite comments from a Moore Street neighbor and another abutter against the addition of a sidewalk on that street for property loss and drainage concerns, that sidewalk remained in the plan.

The DPW’s Marsette said that the town’s decision making on sidewalks typically comes down to “connectivity…and where they can be physically placed.”

Two years ago the economic strain caused by the coronavirus pandemic closed down Natick’s Honey Dew Donuts at the corner of West Central and Mill Streets, leaving its regulars with empty coffee cups and a donut-sized hole in their hearts. The franchise, which marked its last day of business on June 13, 2020, had been on route 135 for 35 years.

But now, signs of life at the strip mall that’s enjoying something of a revival. During a recent stop at J & D Convenience, we noticed a dumpster across the parking lot, and signs of work going on at the former Honey Dew spot. Because we’re nosy, we strolled over, introduced ourselves, and found out that a major gut renovation has just started in the space, which will be home to a new bakery. Though it looks to be more of a production kitchen than necessarily the sort of place where you can order and hang out with your treasures.

Onsite staff, who weren’t ready to reveal the name of the new place, told us it would be two or three months before the bakery would be ready to open.

Could it open before Asaro Bakery & Cafe, set to do business in Church Square in Wellesley?