Natick Public Health Director Jim White would rather his team be doling out vaccines to locals, but he acknowledges that LabCorp’s mass vaccination site setup at Natick Mall is well done.

Speaking during this week’s Natick Board of Health meeting on Tuesday, Feb. 23, White and Board members repeated their frustration at the Health Department largely being cut out of the state’s first dose vaccination plans (the local health team will still give second doses to those who got first doses in town, will be administering the vaccine to at least some 375 Natick Housing Authority property resident next week, and most likely homebound residents). Though White said he understands the Commonwealth’s Department of Public Health only has so much vaccine supply and has decided that distributing it mainly through mass vaccination sites like the one at Natick Mall, as well as via pharmacies, is its most efficient approach.

He’s still holding out hope that local health departments will get brought back into the fold if supplies increase nationally.

Town officials had a walkthrough last week at the newly Natick Mall mass vaccination site, which is ramping up from 100 doses a day to thousands a day seven days a week. The site is well thought out, and the operator did take advice from the town’s police, fire, building, and health officials to make some tweaks, White said. The 80,000 sq. ft. facility has 36 vaccination stations and can hold 70 people in the queue, with separate exits and entrances.

“That’s going to be very advantageous for the Metrowest area,” he said.

The big remaining concern, though, is about the most vulnerable members of Natick and surrounding communities who will have difficulty getting to a site like that. They’re still going to be more comfortable at a more intimate clinic like the town has held for the flu, even providing transportation when needed. White also wanted to vaccinate town employees since “we’re here, they’re here.”

“We’re all a little heartbroken that [the state] took us out of it,” White said, adding that his team was in shock for a day or so after getting the word. “This is what we’ve always been trained for, this is what we do best… I guess they just thought they wanted to move the vaccinations faster. They didn’t think we could move fast enough…” White said Natick could have handled all the vaccine it could have received, and did in fact use every single dose it was granted for the seven clinics it held.

White is looking forward to vaccinating elderly and disabled residents at Natick Housing Authority’s Coolidge Gardens, his old junior high, where wide hallways will allow residents to sit outside their apartments and get their vaccines (same goes for Cedar Gardens). Vaccinations are planned for Wednesday-Friday next week.

As for Natick’s COVID-19 situation, numbers are heading in the right direction, as they are for the state, White said. Natick’s number of cases in isolation has dropped from a high of 188 to 55 to 66 over the past week.

One other note of good news: White said the department has received enough grants to cover all extra expenses throughout the pandemic, and still has grant money in the bank that had been earmarked to support vaccination clinics. “I have not spent $1 out of town funds to this point,” he said.

Coming up at the next Board of Health meeting: A very special appearance by Natick Public Schools Supt. Anna Nolin, who has pool testing on her mind.

The sign above the entrance to the Natick Mall’s new COVID-19 vaccination site that opened Monday says it all: “Epic Fun.”

The sign, which actually promotes the Dave & Buster’s restaurant above, is true in a sense for vaccine recipients in that for many it’s been a tough challenge getting an appointment for a limited supply of vaccine given to the state. Hey, you’re just going to feel a little pinch.

The site at Natick Mall plans to administer 500 doses per day to start out. Vaccines will be administered by appointment only. Now eligible to receive the vaccine are Phase 1 and some Phase 2 groups, which includes people aged 65 and older; people with certain medical conditions; those in long-term care or congregate care settings; and several other groups.

Going forward, the plan is for the Natick Mall site to give out up to 3,000 doses per day, seven days a week.

We stopped by to check out the scene. All was very calm and civilized as a trickle of people walked over from the lower level of Parking Garage C, past LabCorp reps, and into the old Sears building. Those who had arrived early for their appointments waited in their cars until their time was nigh.

If you’ve received your vaccine at the mall or are working at the vaccine site and would like to share your experience, please let us know: natickreport@gmail.com

LabCorp is the vaccine provider, and can be contacted at 888-990-6066 for general event questions and if you need to cancel an appointment you have already set up. Representatives at that number will not be able to schedule appointments. That can be done online here. Or phone appointments may be made on the state’s 211 hotline.

The Natick vaccination site is is accessible, and wheelchairs will be provided on site to those who want one. There is accessible parking, an accessible drop-off and pick-up location, and staff are available to assist as needed. Masks are mandatory.

A Natick Report reader asked how to volunteer to work at the site. We believe the place to start is the state’s MA Responds site.

Like other local health departments, Natick’s has struggled to get as much COVID-19 vaccine as it would like to distribute in light of the overall shortage supplied to the state. The Commonwealth has limited communities not at very high risk levels from requesting more than 100 doses a week, and many have come up empty.

But Natick Public Health Director Jim White explained during this week’s Select Board meeting how Natick’s Health Department came to find itself with many more doses than it expected to get for use this week.

Natick, in conjunction with Wayland, began vaccinating first responders in mid-January, doling out 200 doses.  The setup put Natick in a position to continue with vaccinations through more phases of the rollout if doses became available.

Natick has received its maximum doses in recent weeks, dispensing 100 doses on consecutive Wednesdays for locals who were eligible to get shots and lucky enough to get through the registration system, which opens and closes quickly when word gets out (get notified of availability here). The town has also begun administering second doses to first responders.

White and Public Health Nurse Deborah Chaulk were discussing how they might come by more doses, and wondering why organizations like colleges and universities that have reported surpluses don’t release the extra doses to local boards of health. Chaulk raised the same question about hospitals, which have also been reporting unused vaccines.

That prompted White to reach out to Steve Baroletti, COO of MetroWest Medical Center and that organization’s rep to Natick 180, the local organization that addresses addiction and substance abuse. And as White commented: “Talk about sweet timing.”

White emailed Baroletti that if the medical center ever got any spare doses, Natick’s Health Department would gladly take them off their hands. “Lo and behold he was in a meeting discussing with the state about their surplus and handing back in to the state, which the state requested, or if they had another certified approved site within the area that they knew of that could use the vaccine that they could transfer it over to them,” White said. Baroletti got back and said he could deliver 150 doses, but then last Friday actually delivered 300, which Natick was able to use at clinics this week for the 75-and-older crowd.

“We’re doing what we can with what we’ve got, but we’d love to do more,” White said.

Natick is also aiming to hold clinics at Natick Housing Authority locations for those eligible residents toward the end of this month, he said.

Meanwhile, the state has announced that a vaccine site open to all eligible residents will begin operating at Natick Mall on Feb. 22, with plans to administer 500 doses per day. White says the plan for that site is to gear up for 3,000 doses a day, seven days a week, once things get cranking.

If you have an interest in learning more about what the Health Department is up to beyond what’s shared at Select Board meetings, be sure to reach out to Natick Pegasus and let them know you’d like for them to make recordings of Natick Board of Health meetings available on a regular basis.

Natick Mall will be the location of a new mass COVID-19 vaccination site as of Feb. 22, the Baker-Polito administration announced on Wednesday. LabCorp will be running the site, for which appointments can be booked starting on Feb. 18.

Mass sites like this, and ones at Gillette Stadium and Fenway, are for all eligible residents (not just Natick ones), which currently includes first responders, those age 75-plus, and more. Consult the state’s eligibility checker to see if you are eligible.

The administration also announced that individuals who accompany someone age 75 or older to get a vaccine at a mass vaccination site may also schedule and receive their own vaccination on the same day.

The Natick Mall site will begin administering 500 doses per day, then increase that over the course of several weeks to 3,000 doses daily. 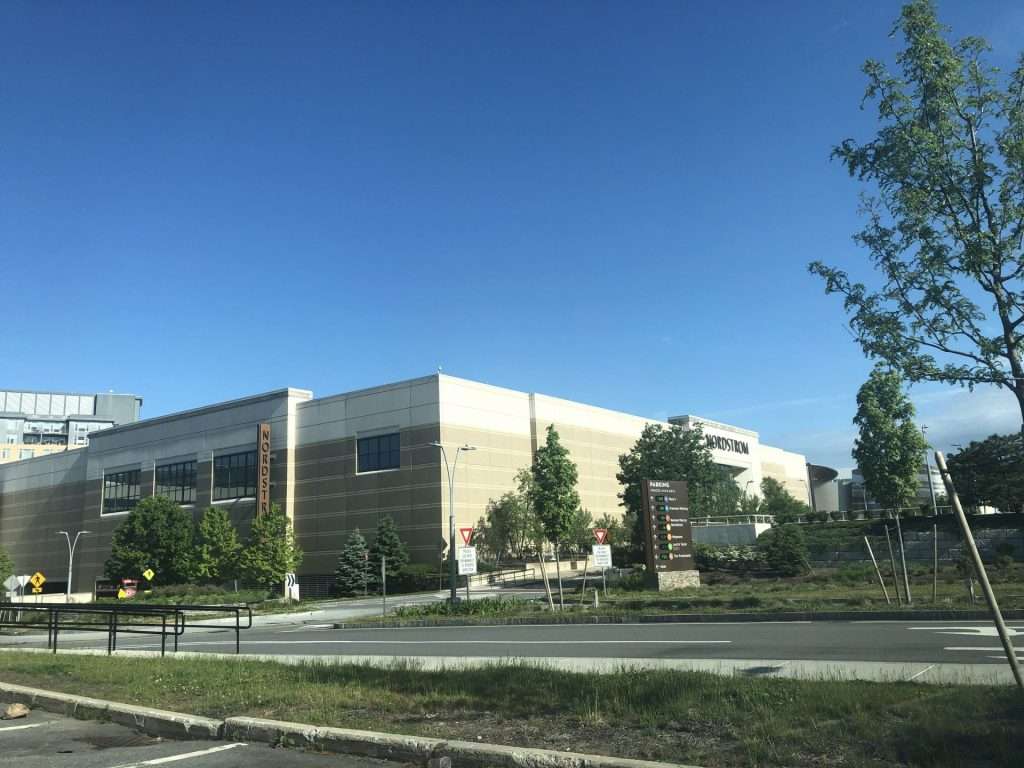 Separately, the Town of Natick announced another new local Moderna vaccine clinic for those who live or work in town.

Only those eligible under Phase 1 of the state’s vaccine plan and those 75 or older (Phase 2A), are eligible.

You may verify your eligibility here and register here

Here’s a look at the latest Natick, Mass., business news:

Nineteen more small businesses in Natick have scored COVID-19 Small Business Grants from the state, which this week announced $174M in awards to more than 4,000 entities in the sixth round of grants administered by the Massachusetts Growth Capital Corp. Dozens of Natick-based small businesses have now been awarded grants, which are earmarked for businesses most affected by the pandemic.

During this round, about $900K went to Natick businesses, with awards ranging from $10K to $75K.

Not all businesses on the list are easily recognizable by their formal business names, but eateries such as Eli’s and Charles River Coffee House and athletic facilities such as Frozen Ropes and A9 Pilates were among the recipients. 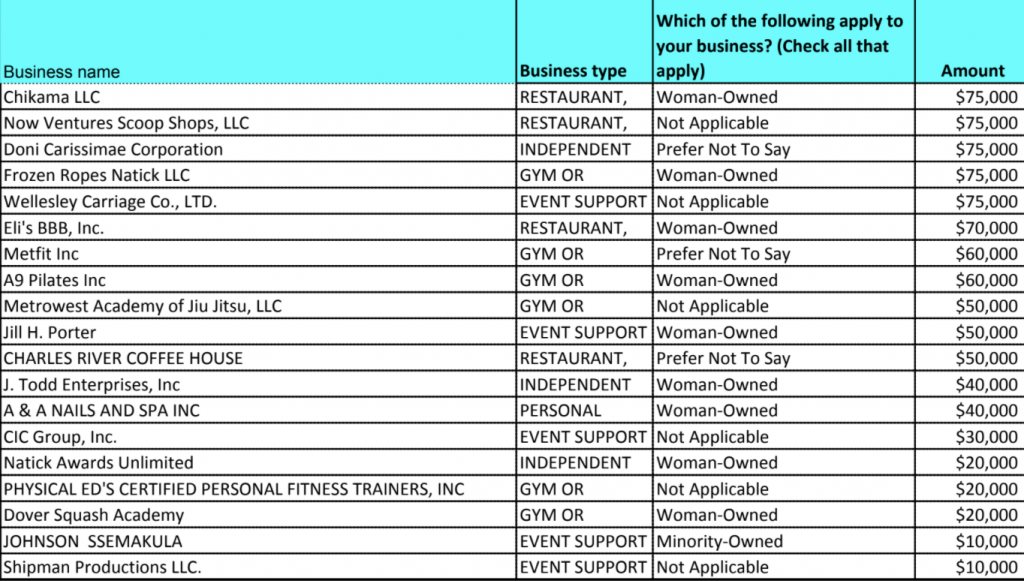 Meeting of the Makers on Feb. 25

You are invited to an online discussion of artisans and “makers” about these types of businesses and what they need to thrive in Natick. The free online event starts at 10am on Feb. 25.

Meet and interact with a panel of experts to discuss questions like: