The scary situation during a recent Buffalo Bills football game when one of the players required CPR on the field inspired friends to take the free CPR class offered by the Natick Fire Department.

Regardless, of your inspiration, if you’re interested in taking the class and getting certified, you can select from 2 times in February:

The classes last about 2.5 hours, though can vary depending on class size. All ages are welcome to take the class.

If this schedule doesn’t fit yours, or if you’re interested in arranging for a group to take a class, reach out to Firefighter & Paramedic Alan Gentile at agentile@natickma.org

The classes are available to Natick and non-Natick residents alike, though there is a $20 fee per non-resident to cover the cost of a certification card. All ages are welcome to take the class.

Each certification card has a recommended renewal date 2 years after it is issued. “This is because advances in the medical field happen frequently, so to stay current the [American Heart Association] believes after 2 years you should renew if for no other reason to remember some of the ins and outs since it’s not a skill you use often,” Gentile says. Natick’s classes are good for initial certification as well as renewal.

“We appreciate anyone who takes our courses. As recently seen on Monday Night Football immediate CPR can save a life. By the time any first responder gets to a scene where CPR is needed, we are already behind the 8 ball and the longer the person is down, the less of a chance they survive,” Gentile says.

Vincent Goo, introduced by the Natick Fire Department as a firefighter/EMT in October, graduated from the 50-day Career Recruit Firefighting Training Program in Stow.

Data-driven Natick Fire Chief Jason Ferschke started his presentation to the Select Board earlier this month (about 75 minutes into the Natick Pegasus recording) by focusing on words instead of numbers. He made an obligatory run through the department’s mission statement—down from 2 pages to 1 sentence!— as well as its vision statement and core values.

Then he got to the good stuff.

That started with a brief history lesson. Back before Proposition 2 1/2 in 1980, the department had a minimum of 24 members on duty, and following an override in the early 2000s, that went to a minimum of 17. Currently, the department has defined groups of 20 or 21, though struggles to stay at even the 17-person minimum due to hiring challenges, firefighters on long-term injury leave, and staff taking vacation or other paid time off. Juggling personnel between ambulances and engines is required, as is covering for shortages with overtime, Ferschke said.

“About 90% to 94% of the time we’re running at our minimum staffing,” the chief said. Difficulties staffing the department’s second ambulance particularly make Ferschke uncomfortable, and he said boosting headcount is “high on my radar.”

Some of the department’s big challenges are that the town’s population of about 37,000 balloons to 2 or 2.5 times that during the day, and that people are scattered across all sorts of infrastructure from single-family homes to high rise apartment buildings and commercial properties. The department is on its way to handling some 6,000 calls a year, close to double from the early 1990s. 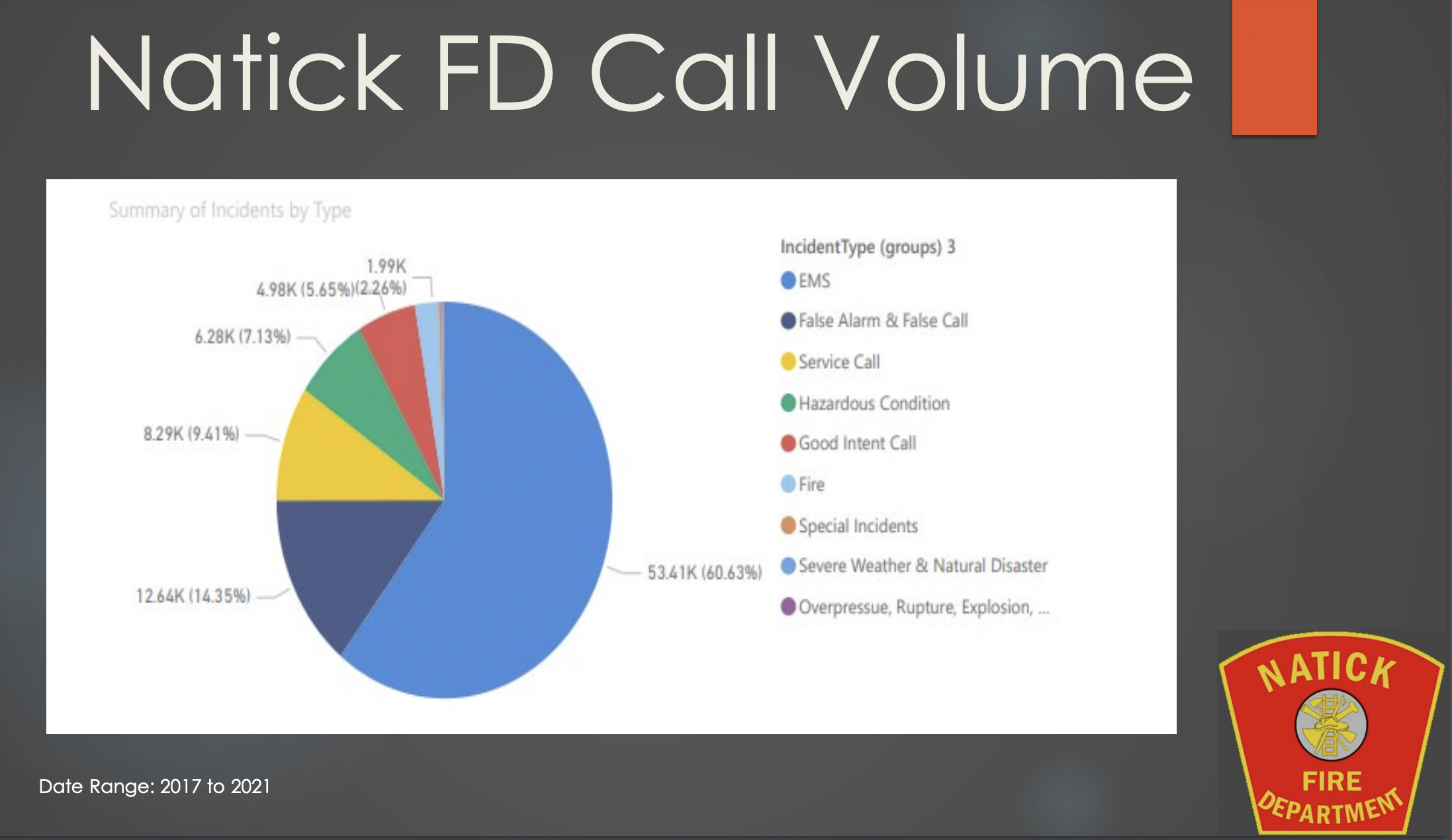 It’s also taken the town and department time to adjust to the closure of the Leonard Morse Hospital emergency room in the fall of 2020. The impact this would have on the fire department’s services, including ambulance response, wasn’t fully understood at the start, Ferschke said. Among other things, the department gets more calls in South Natick that previously would have been handled at the hospital ER. It has also required more mutual aid calls involving other communities’ first responders.

Select Board member Paul Joseph toward the end of the presentation and discussion with the fire chief raised the idea of whether Natick, from both a revenue generation and public safety standpoint, might consider adding ambulances. The ambulances wouldn’t be idle between Natick’s needs and those of neighboring communities that might pay for access.

Diving into the data from 2017-2021, ambulances would take about 45 minutes per call to Leonard Morse, but it took more like 65 minutes to turn around a call to MetroWest Medical Center in Framingham and more than 80 minutes for Newton-Wellesley Hospital calls due to the increased distance traveled. That adds up to significantly more time that those Natick ambulances are unavailable for other responses. Plus, consider ER wait times are growing with hospital staffing shortages. 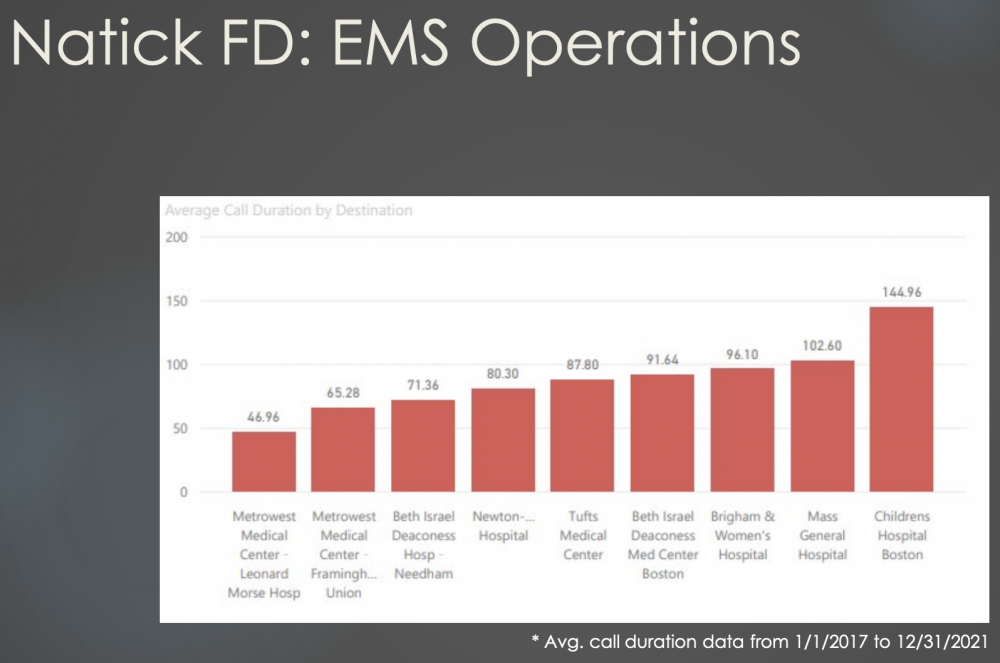 Pile onto that the fallout from the COVID-19 pandemic—people who put off medical care are now feeling the effects of that and that’s resulting in more calls to the fire department. EMS calls make up the majority of activity.

“I don’t think we’ve fully understood and comprehended the long-term health impacts that that’s had. Everybody stopped preventative maintenance for a year or two, and we’re starting to see that on our day-to-day responses. The general population tends to be sicker,” he said.

It’s also getting older, as the town welcomes new senior living facilities such as Anthology on Rte. 135. Ferschke said he’s engaged with the Planning Board from the start on this to make sure that the public safety considerations of new projects are considered seriously.

The complexity of calls has also increased over the years. “The speed with which fire grows has drastically changed from the 1970s and 1980s when you had a lot of natural materials that didn’t burn as rapidly,” Ferschke said. “Now all of our houses are filled with synthetic materials that burn and produce very toxic products of combustion very rapidly.”

In the interest of improving the data available for the fire department and others to use, Ferschke said upgraded electronic records management software is in the works, hopefully for the new year. So expect next year’s update to be even more data filled.

Select Board members heaped praise on Ferschke during the meeting. At the Dec. 28 Board meeting, the chief will get his 6-month review. Here’s guessing it’s going to go just fine. 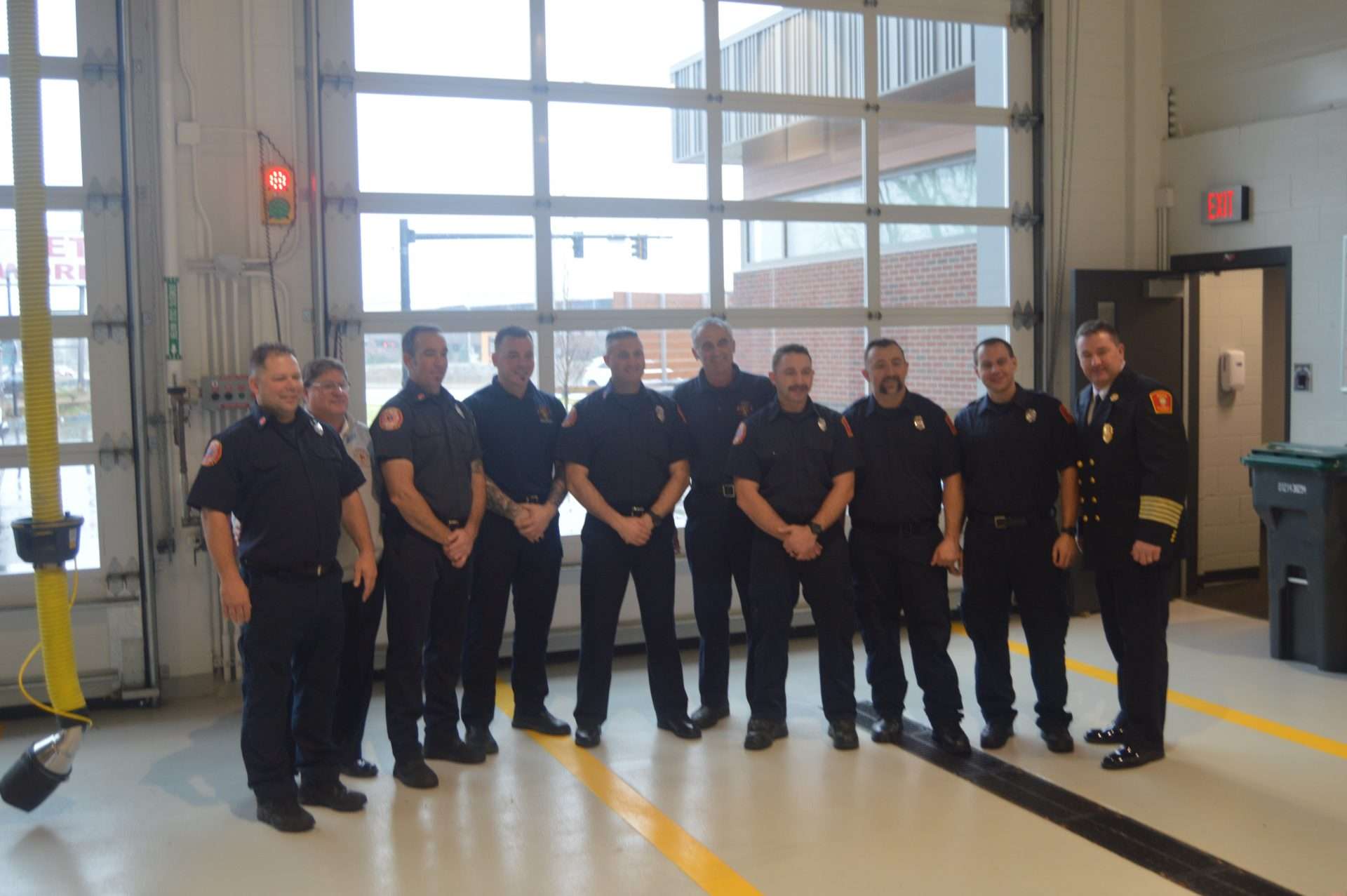 We were lucky enough to get a tour of West Natick Fire Station #4 at 268 Speen St. when it was completed in July 2021. Michael Lentini, the chief at the time, walked us through the 17,000 square-foot station, showing off the brand-new ADA-compliant building and all its bells and whistles including the five double-deep apparatus bays; training areas; enhanced safety measures; and more.

But with COVID-19 protocols still tight back then, a bigger public gathering was delayed.

Select Board member Michael Hickey couldn’t take that much longer, and made a plea at a recent meeting to get the dedication done by year-end. Mission accomplished.

Even after a date was set the timing proved to be a challenge: The firefighters were competing for the local public’s attention vs. the United States men’s soccer team World Cup game on a rainy Saturday morning.

That game, a 3-1 defeat to The Netherlands, didn’t come close to going into extra time. Fortunately, the fire department graciously added extra time to its schedule and accommodated those of us who scrambled over after the match was done (the game could actually be viewed in the cafeteria, Chief Ferschke told me). Oh well, missed the speeches…but did catch up with the fire staff and town leaders.

Visitors toured the station, kids climbed on the vehicles and donned plastic firefighter helmets, and treats were doled out with a bit of holiday decorating mixed in. 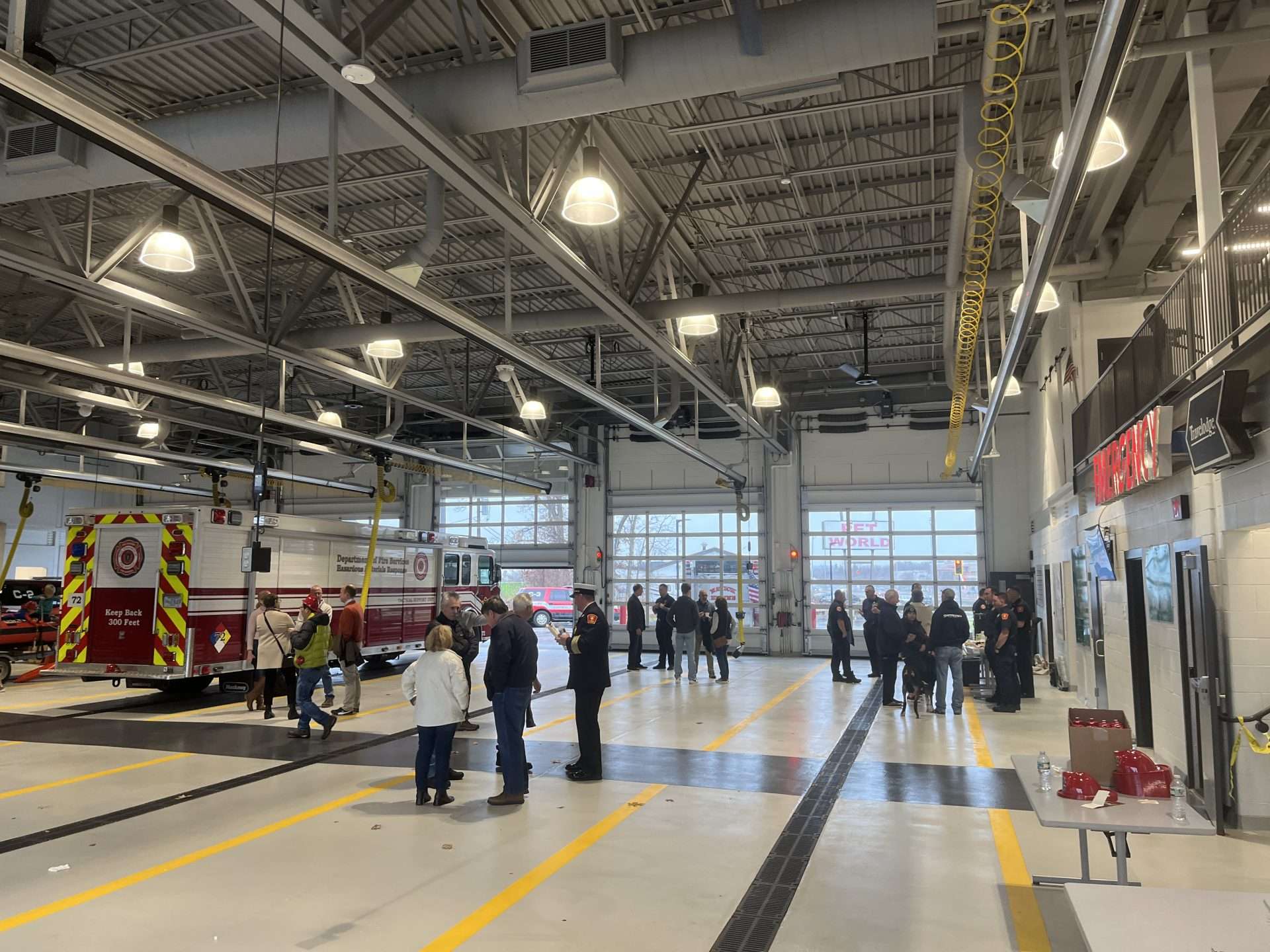 We were lucky enough to get a tour of West Natick Fire Station #4 at 268 Speen St. when it was completed in July 2021. Michael Lentini, the fire chief at the time, walked us through the 17,000 square-foot station, showing off the brand-new ADA-compliant building and all its bells and whistles including the five double-deep apparatus bays; training areas; enhanced safety measures; and more.

Must see home-y details: the vintage EMERGENCY sign (try to guess where it was sourced from), and the Fight’n Fourth dining table.