Natick Community Organic Farm this week held its annual meeting online and shared a summary of the past year and a look ahead, which if all goes well will include a barn raising. The farm had planned to break ground in the fall, but you know how construction projects go these days…now plans are to prep the site this month and raise the timber this spring.

Education programs account for the farm’s biggest chunk of income, so look for more adult education workshops in 2023, plus a pilot of weekend family programs.

Farm employees and volunteers are especially enthusiastic about bringing back a full slate of in-person events this year. Maple Magic, which includes a pancake breakfast and maple sugaring tours, is slated for March 4.

The Town of Natick Department of Public Works has announced the fall 2022 yard waste collection schedule.

Fall yard waste will be picked up one time only for each trash day.

Yard waste can be brought to the Recycling Center, 75 West St., throughout the year.

Fallen leaves contain a natural fertilizer called phosphorus. When leaves are mulched and left in yards to decompose or are composted, they add nutrients to soil and plant beds. Leaf litter left in yards also helps insulate plants and protect them from harsh winter weather.

Last year we topped our perennials border with a thick layer of leaves, and left the fallen leaves around all our shrubs (azaleas, rhododendrons, hydrangeas—you get the idea). We didn’t get all high horticulture by shredding them or anything fancy like that. We wondered if the fall and winter winds would just blow all those leaves back onto the lawn. Come spring, there was evidence of some of that, but we’re not talking major piles of additional spring clean-up to deal with than in years past.

But what about all those leaves in the perennials border and under the shrubs? Did we now have to rake them out during spring clean-up? Definitely not. Every year we get three yards of mulch delivered at the beginning of May. When mulching the perennials bed and the shrubs, we just put the mulch on top of the leaves we placed there last fall. We feel having the leaves under the mulch gave the plants one more line of survival defense during the extremely hot summer of 2022. In our yard we have several azaleas under huge trees, which compete with the delicate shrubs for scarce water resources. We didn’t lose a single azalea over the summer, which we credit to this double line of protection.

We’re not crazy—we don’t leave the leaves everywhere. What we can’t mow back into the lawn, we rake up and bag. But we are wondering if our wide expanse of lawn is 100% necessary. Bob extended the perennial border by two feet for me this month, all the better to reduce the portion of our yard devoted to lawn (and to add a few plants before the freeze). Wait, wasn’t I supposed to be scaling back the whole gardening thing? Seems I just can’t help myself. If loving new plants is wrong, I don’t want to be right.

Broadmoor Wildlife Sanctuary in South Natick is looking mighty colorful even before the fall foliage kicks in.

Thanks to Denny Nackoney for sharing these photos, which he says were identified during a nature walk as water marigolds. The photos were taken from the wooded boardwalk across the stream and wetlands.

“Best guess is that because of current drought, high temps, and the stream’s low water level, it was just the right conditions for them to take off.  What a spectacular sight!” he wrote.

Thank you to correspondent Christine Schell for the following story and photos.

Ricky perched center stage at her own picnic table, while husband Jay Ball stayed with the crowd taking photos of the speakers and Ricky.

Natick Select Board member Paul Joseph teared up during his speech, then took a breath and forged ahead, drawing parallels between Ricky’s 60-year dedication to Natick and the Garden’s purpose of nurturing community and nourishing people.

Slam poet Jamele Adams performed a poem honoring Ricky, calling her a “boss” who “leaves a mark on your skin, brain, and heart.”

Other speakers in attendance included Natick resident and MA State Rep David Linsky, and Massachusetts Senate president Karen Spilka who called Ricky a “giant in the Natick community in every aspect of the word” and a “beacon of a public servant.”

But the fan favorite, the true luminary, and the brightest star of the night was Ricky. She reflected on the many positive changes in Natick over the years, and expressed humorous regret that she and Jay have chosen this time to relocate to Canton. She said that coming to Natick was the best thing that ever happened to her, and then promised, “I’ll be back.” If you know Ricky, you won’t doubt that.

Be a part of Natick’s growth industry

Registration information on how to sign up for your own garden plot.

Questions about the community gardens program can be directed to the Community Gardens Coordinator at communitygardens@natickma.org or by calling 508-647-6400 ext. 2013.

After a July that brought thirteen days during which temperatures reached over 90 degrees, combined with a measly 0.62″ of rainfall in the Boston area according to the National Weather Service, brown lawns in Natick are having a moment, and maybe even a proud one at that. After all, how better to virtue signal, “in our house we believe climate change is real,” than by taking the sprinkler system offline and letting nature take its course?

Lately as we drove around the various neighborhoods of Natick, manicured green lawns certainly were in evidence, but seemed to be in the minority. One reason could be that the town hasn’t made it effortless for homeowners to keep the grass green on either side of the fence.

Restrictions put into place last month mandated a two day/week watering schedule for both residents and businesses. Those occupying a building with an odd number street address must limit nonessential water use, including lawn and garden watering. to Monday and Thursday from the hours of 5pm on the select day until 9am the following day.

Residents and businesses occupying a building with an even number street address must limit nonessential water use, including lawn and garden watering, to Tuesday and Friday from the hours of 5pm on the select day until 9am the following day.

There is to be no non-essential outdoor water use on Wednesdays, Saturdays, or Sundays.

And don’t think about taking your bucket down to the South Natick Dam to scoop up some water to spread on your lawn. The pickings are mighty slim there. 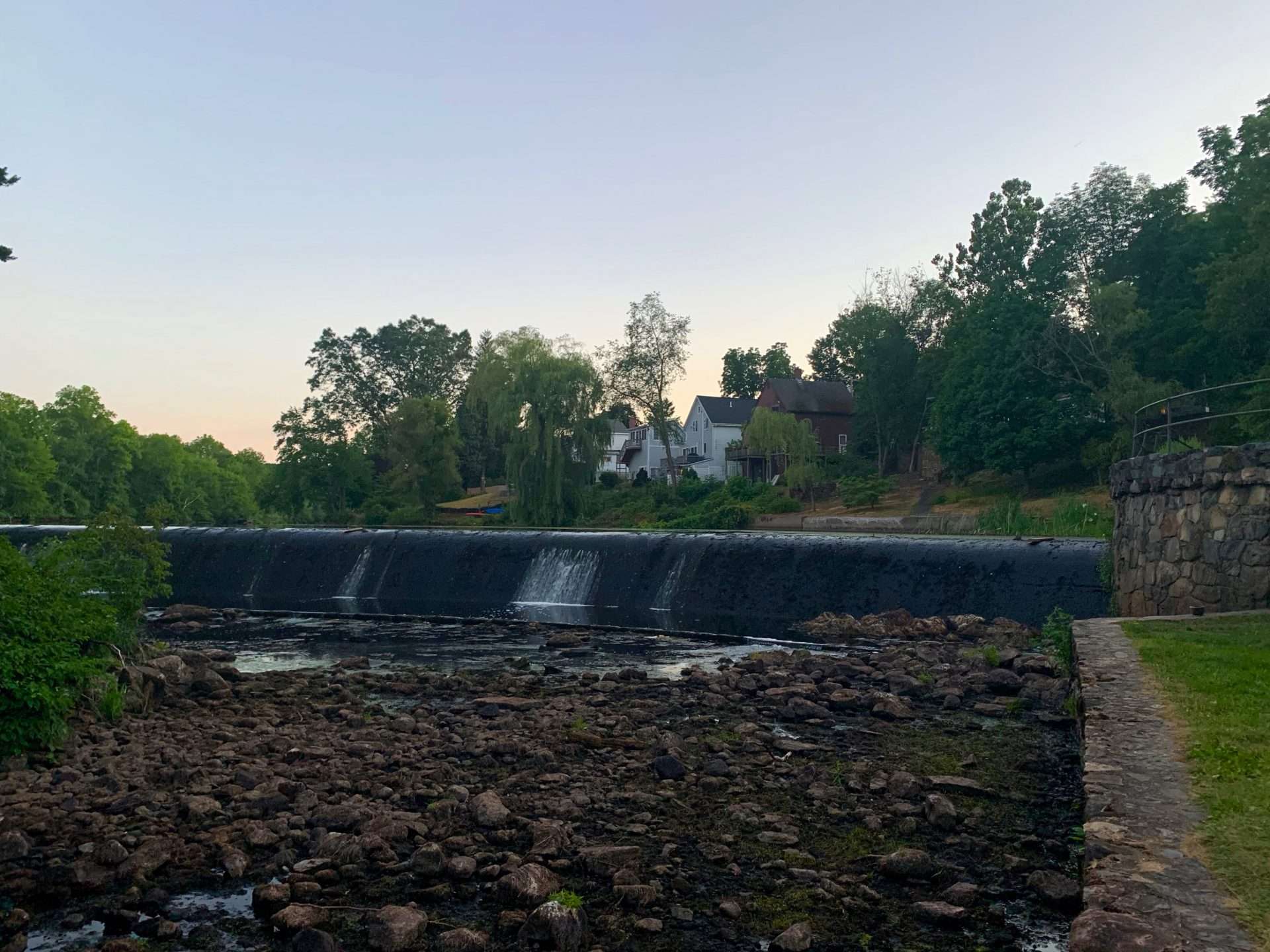 Could the tide be turning against the perfect green lawn as the ultimate outdoor status symbol? It’s too early to call brown Natick lawns a trend, but the situation bears watching. It’s not too late to join in. Although the long-term forecast calls for more civilized temperatures in the 70s and 80s, and it looks like some rainclouds are on the horizon, summer is far from over. Your lawn can still transition to a beautiful brown expanse, a nonverbal embodiment of your feelings about water conservation.