Applications to vote by mail must be received in the Town Clerk’s office by 5pm on Wednesday, March 24th. Please note that you must fill out a new application for elections in 2021.

Massachusetts state law allowing mail-in voting has been extended in the Commonwealth through June 30, 2021.

More on voting by mail:

If you cannot download an application, call 508-647-6459 for assistance in receiving a vote-by-mail application, or with any other election questions.

The Natick Town Clerk’s office  has sent out early ballots to those who have so far applied for them. The Ballot Box in front of Town Hall located at 13 E. Central Street is open to return ballots, and for mail-in ballot applications.

There will not be any in-person early voting.

END_OF_DOCUMENT_TOKEN_TO_BE_REPLACED

The Natick Board of Health will hold its 35th annual Household Hazardous Waste Day on Saturday, May 8, from 9AM to noon at 75 West St. at the DPW garage (not at the DPW recycling center as an earlier photo with this post indicated. Sorry about that.)

Town Hall is closed to the public, so the following process will be used for ticket sales. Please have your payment to Town Hall by May 1 by taking these steps:

You’ll be sent a ticket for the HazMat event once your check is received.

The event is limited to 300 vehicles.

The Natick School Department and Board of Health have plenty of reservations about the state’s mandate for students at public schools to return to classrooms full time next month, but Natick Public Schools Supt. Dr. Anna Nolin says her team has been preparing all along for this to happen.

“I want you to know that we’ve been planning for school reopening since the fall, that it is always the Natick Public Schools’ greatest hope that we get students back in full live schooling as much as possible, but wanted to do so in a safe manner,” Nolin said at the Natick Board of Health meeting on March 9 meeting.

She had initially planned to attend that meeting to give an update on COVID-19 pool testing that Natick Public Schools has begun using, but her presentation expanded into laying out how Natick is readying for its transition from a hybrid learning model to a full return to classrooms, at least for K-8 students (week of April 5 for elementary school, week of April 26 for middle school, unclear on high school).

The pool testing, which started last week and is funded by the state for the first six weeks, is among the key mitigation efforts designed to make a full return to school work as some mitigation efforts are loosened (e.g., social distancing of 3 rather than 6 feet in some situations). More than 90 volunteers, largely vaccinated medical personnel, are essentially running the program day to day, with oversight by the school’s nursing department, with Nolin’s support on the back end for logistical support. The state has also supplied medical services employees through a vendor partnership to support the program.

The pool testing—at what Nolin calls the “70% sweet spot of participation” so far—complements other mitigation efforts, from hand washing and social distancing, to air filtration and ventilation as well as plexiglass barriers on desktops. Natick Public Schools have boasted no in-class spread of COVID-19 among adults or students, and overall just 2% of students and 3% of faculty/staff have reported infections. NPS is exploring how to approach pool testing once the free pilot period is done, and Nolin said there are other pool testing options that could be more cost efficient if the schools decide to keep going with it for the rest of this school year or at the start of next school year.

Despite the pool testing and other approaches being taken by NPS, the Board of Health and Health Department expressed reservations even while recognizing that the schools have no choice but to reopen.

See also: Wellesley Board of Health: Benefits of returning to classrooms outweigh the COVID-19 virus risk

Public Health Director Jim White aired worries about the students, but even more concern about the adults who will be around them given that vaccine rollouts to them have only just begun (parents have been helping teachers book vaccination appointments, a grateful Nolin said).

“There has been so much effort put into this hybrid model and it actually has been working exceedingly well for the town of Natick, and to change things at the end of the school year…it just boggles my mind that they want to change right now when the entire school year is coming to an end,” White said. (Of course some would argue that while Natick has done its best to accommodate students and families, including those going full-remote, the mental and physical health of students will still benefit from them getting back into school in light of the latest scientific and local data about how COVID-19 really spreads.)

Nolin says planning has been put in place to ensure maximum safety under the circumstances, and acknowledges there are gray areas that still need to be addressed, including how lunch will be handled. The superintendent said there’s “immense push and pressure” from parents, for example, for traditional year-end celebrations to take place, but it’s unclear how that will be handled safely.

Certain classes, such as physical education and music, might need to be rethought. “There’s lots of other ways you can teach music. We have a robust percussion program. God help us all for all the drumming that will happen,” Nolin said. NPS may also wind up renting space to accommodate students under social distancing guidelines.

One frustration, Nolin said, is the role that the Health Department will be able to play related to NPS moving forward under state rules. The Board of Health could shut down the in-classroom operation of schools, but the school system would have to make up for any lost time through the summer or next year.

“Regulatory changes have been made that make this not a possibility for me to ignore the mandate, and so I need your partnership in the safest return to school that I can possibly do,” Nolin said. “We can do anything that we set our minds to I am sure, and parents are going to be able to make decisions about their students’ participation in live school or not.”

The Natick Community and Economic Development Department will seek the Select Board’s blessing on Wednesday for proposed street art at the Rte 27/135 intersection. The Board and Safety Committee have already approved the concept of having art painted directly on roadway surfaces.

The art, solicited in conjunction with the Natick Center Cultural District, is part of a broader traffic calming initiative that has featured sidewalk bump-outs and flexible posts funded via a state grant. It’s also part of an effort to integrate art into just about all aspects of how the town looks and operates and helps people get around.

Fourteen artists submitted 25 entries for the street art, and that list was narrowed to 10 finalists.  Artists will receive grants of up to $1,800 to design and paint their works this spring. Hope you like ’em—they’re designed to be permanent. 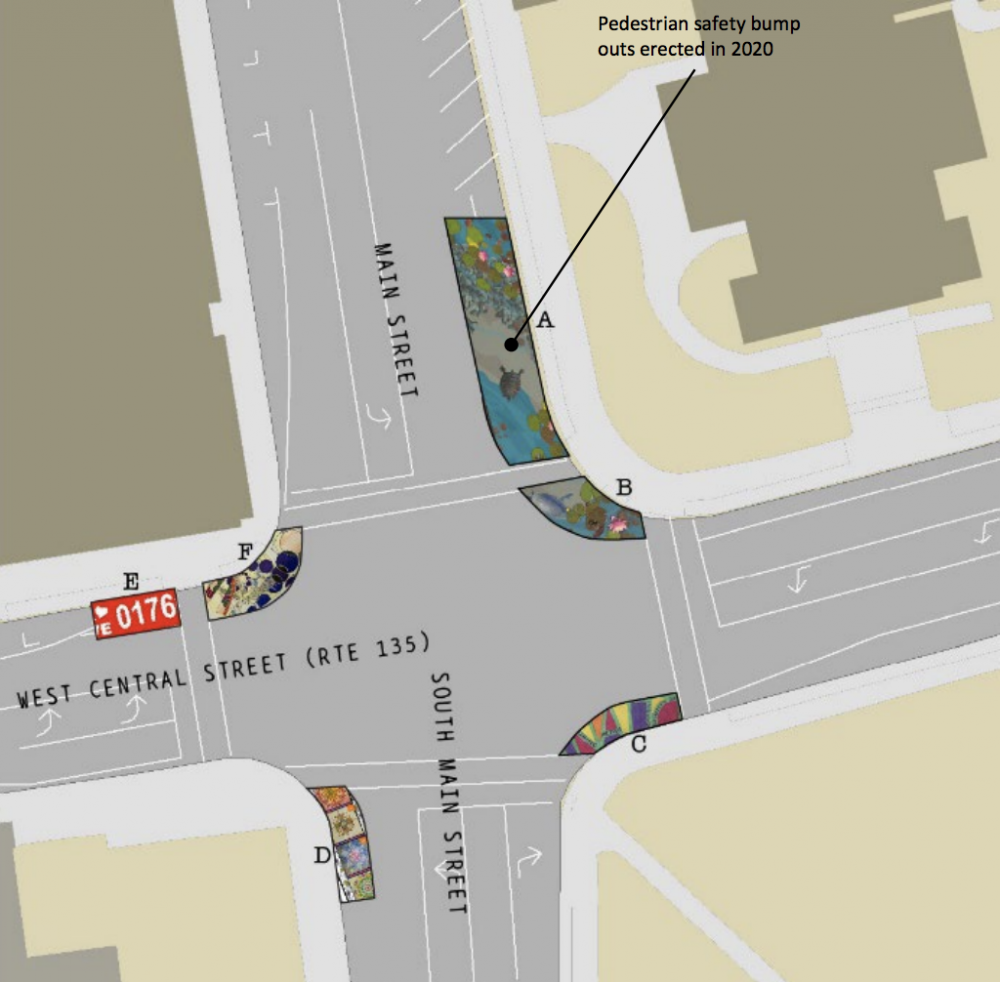 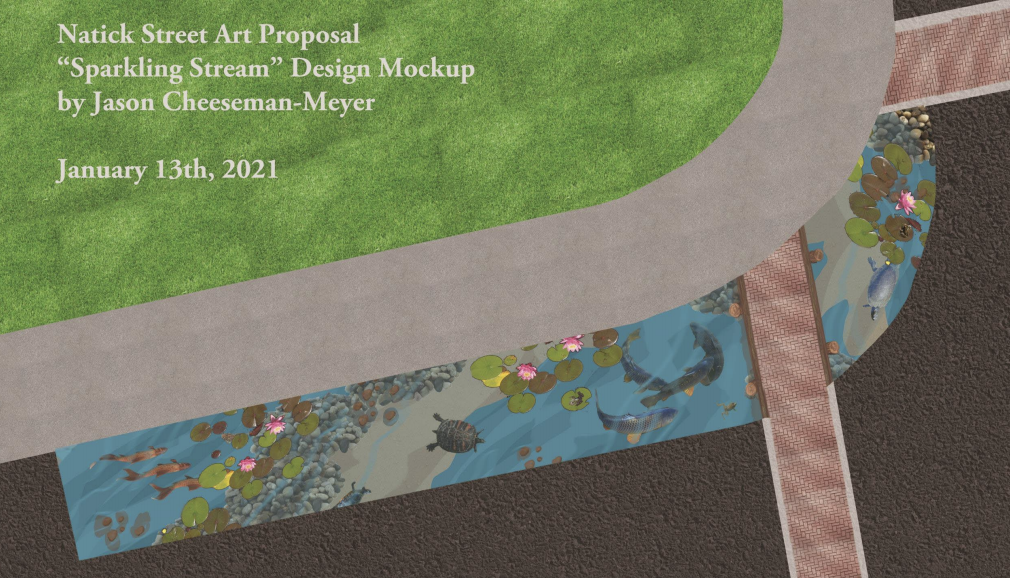 The Natick Select Board this week is set to deliver a proclamation (in fancy script) in recognition of the 100th anniversary of the Department of Public Works as of March 7, and launch a celebration of the DPW’s Century of Service.

OK, who’s got an amazing or amusing DPW story to share? natickreport@gmail.com

Dr. Donna McKenzie, Natick School Committee and Town Meeting Member, says the DPW is her favorite, as they treat residents like family.

“They have been wonderful over the years. When I was concerned about wet leaves and debris in the street that might interfere with getting my dad in and out of his wheelchair, they arrived within an hour to clean the street,” she says.

And then she added this humorous anecdote: “Once I was worried our sewer line was backed up. Two DPW men arrived and concluded that it was only a toilet blockage and a plunger with a hole in it that was the problem. I had another plunger so they plunged my toilet. My father, who was failing and immobile, could not stop laughing. ‘How the hell did you get two men from the town to come and plunge our toilet!’ Honestly I had not heard him laugh like that in quite a while and he was profuse in his gratitude to these two men, saying that Natick was such a nice town.” 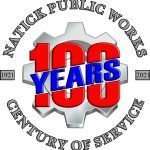