Bald eagles have been making their presence increasingly felt in Natick in recent months and years, and now it could be that one has chosen the South Natick area as a good spot to raise a family. Hey, why not? The neighborhood has everything they need for a happy home—the Charles River is right there and full of fish, and there are ample massive old pine trees to choose from to build the perfect aerie.

Eagle-eyed reader Patty Campbell sent along some great shots of a bald eagle apparently picking up some building supplies from a tree in her South Natick yard. After pausing on a sturdy branch, she says the eagle then flew off with a twig toward a nearby well-wooded area. All photos by Patty Campbell. 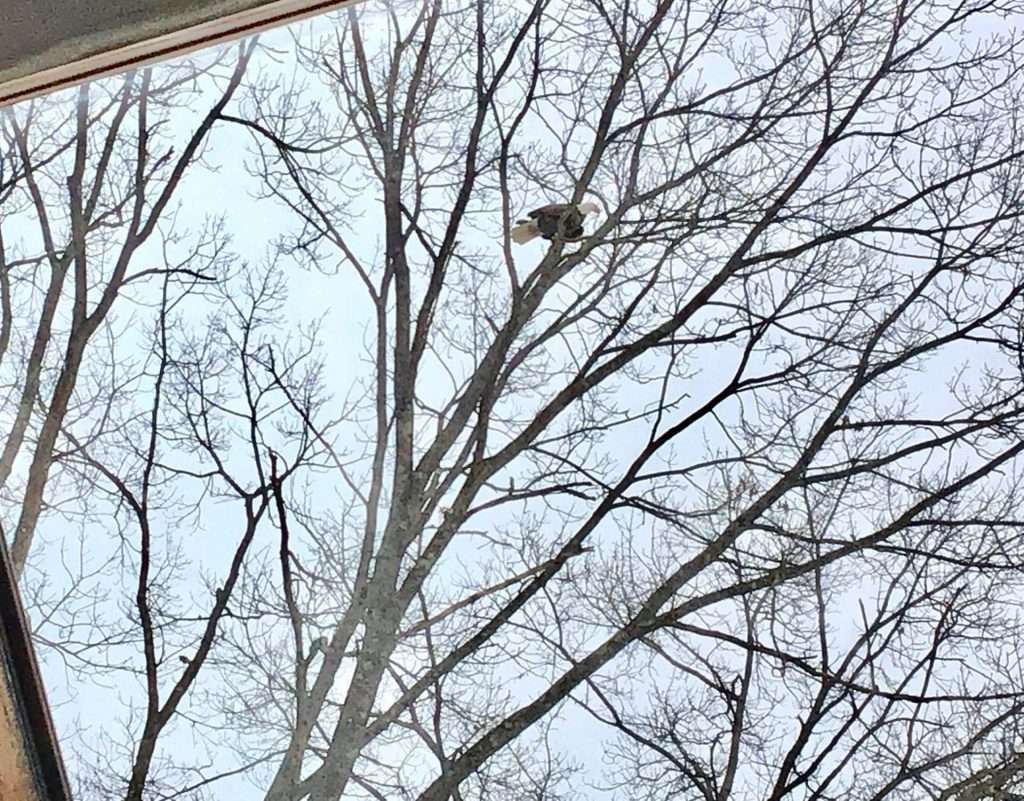 We love getting Natick wildlife photos, so don’t be shy about sending them: natickreport@gmail.com

More on eagles in the area

Our go-to trails are in Natick and Wellesley because they’re fun and nearby, but on weekends we try to branch out and hit other trails across the state. This past weekend we returned to Ashland State Park, which we had visited last fall, and weren’t disappointed.

Ashland State Park is between 8 and 10 miles away from Natick Center and it takes about 20-25 minutes to get there. There’s free parking at the entrance and the main walk goes around Ashland Reservoir, which has a dam and spillway at one end, as well as a little island to explore at the other end. During the swimming season you can park further in at the park, but it’ll cost more or less depending on whether you’re a local or not.

Conditions over the weekend made for a nice winter walk, with snow packed down firmly the day we went (yaktrax recommended for surer footing). We saw evidence that fire tire cyclists also enjoy this path.

Our trek took about 1.5 hours at a steady pace. You can see the reservoir throughout the hike, and the day we went included the sight of several ice fishing packs yukking it up in late afternoon. We didn’t trust the ice’s stability ourselves, so stuck to the trails, which no doubt would be even more beautiful after a fresh snow covering on the trees surrounding the water.

We’ve attached a trail/site map at the bottom of this post. 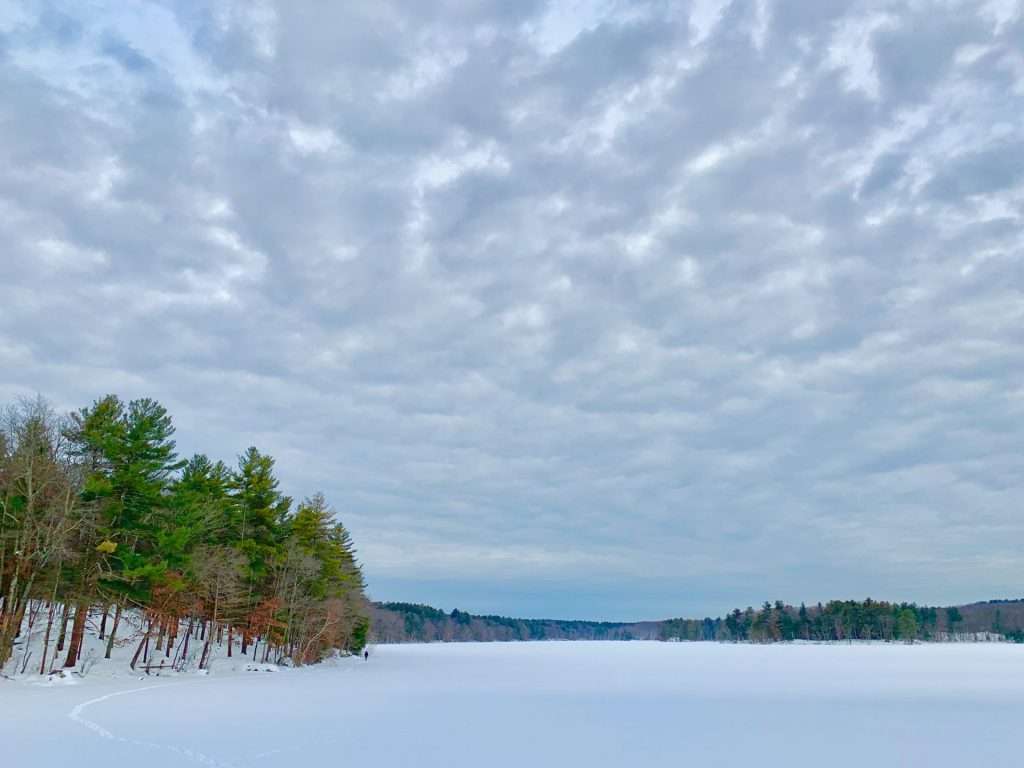 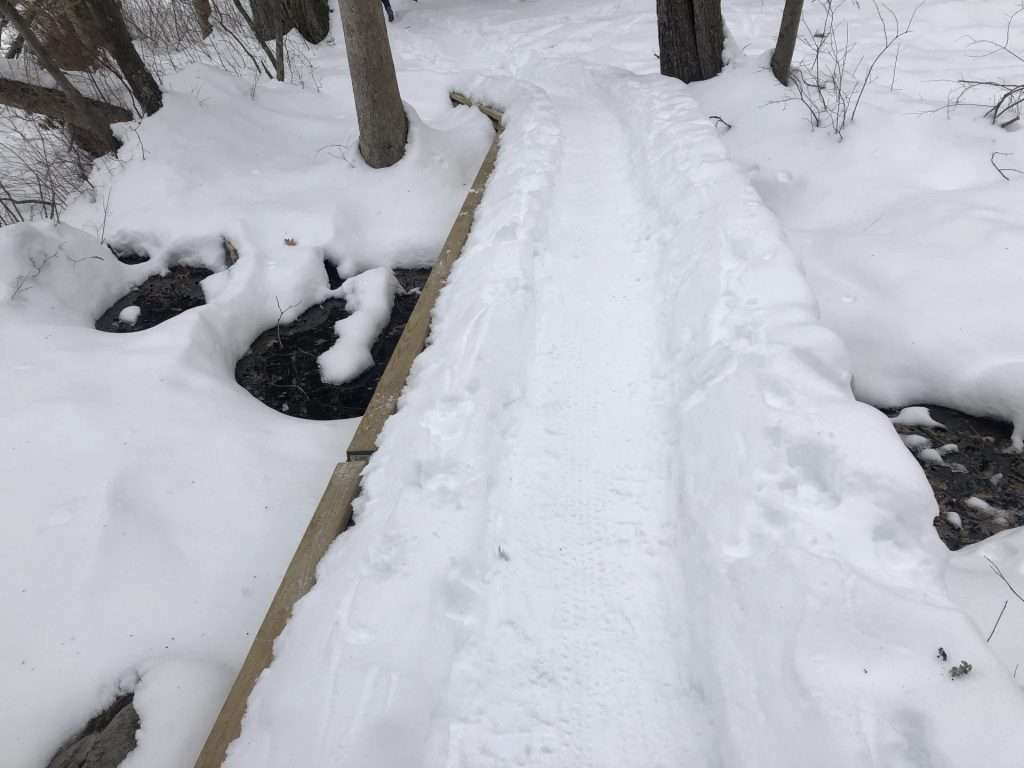 Members of Natick Runners are no one-trick ponies. They can also swim and dive, as displayed again on New Year Day morning at Dug Pond.

An initial crew of three got things started at 9AM with air temps at -2 (we go with celsius to make this feat more impressive), then more braved the water in ones and twos as the morning progressed.

One pro tip from a veteran was to forego the pre-dunk run and just go straight in.

Unlike some past years, no ice breaking was required to give the polar plungers a path into the bath-like water. 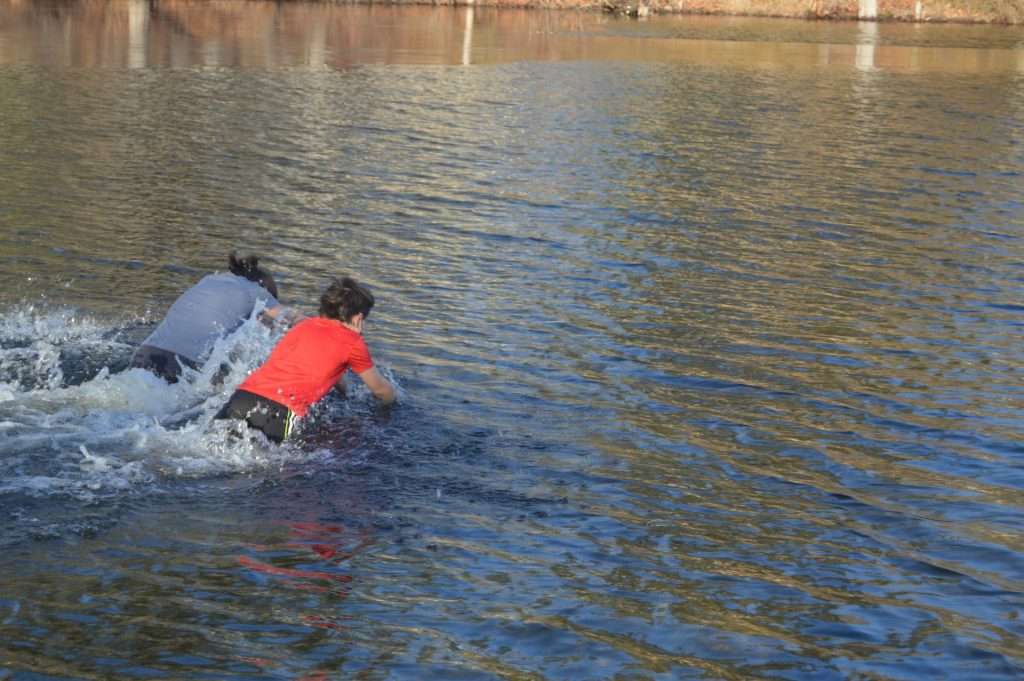 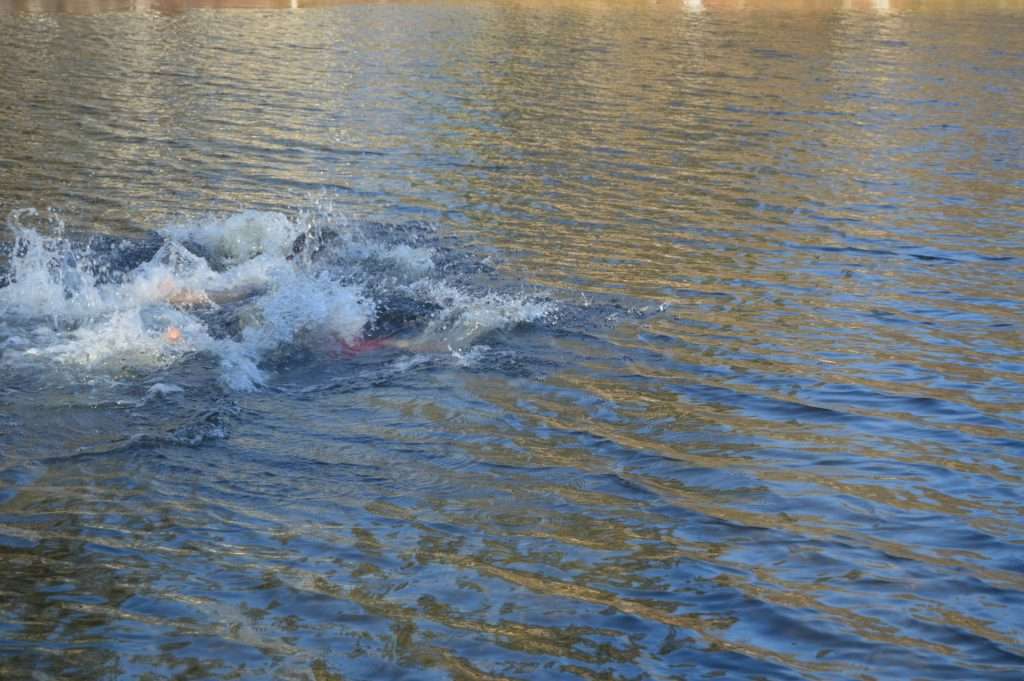 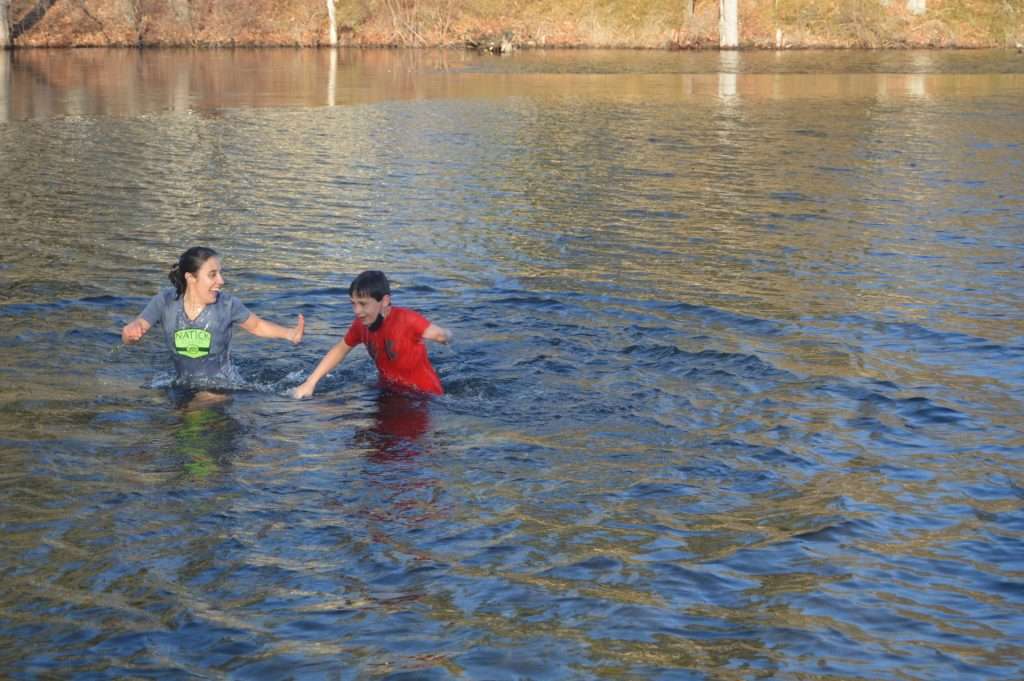 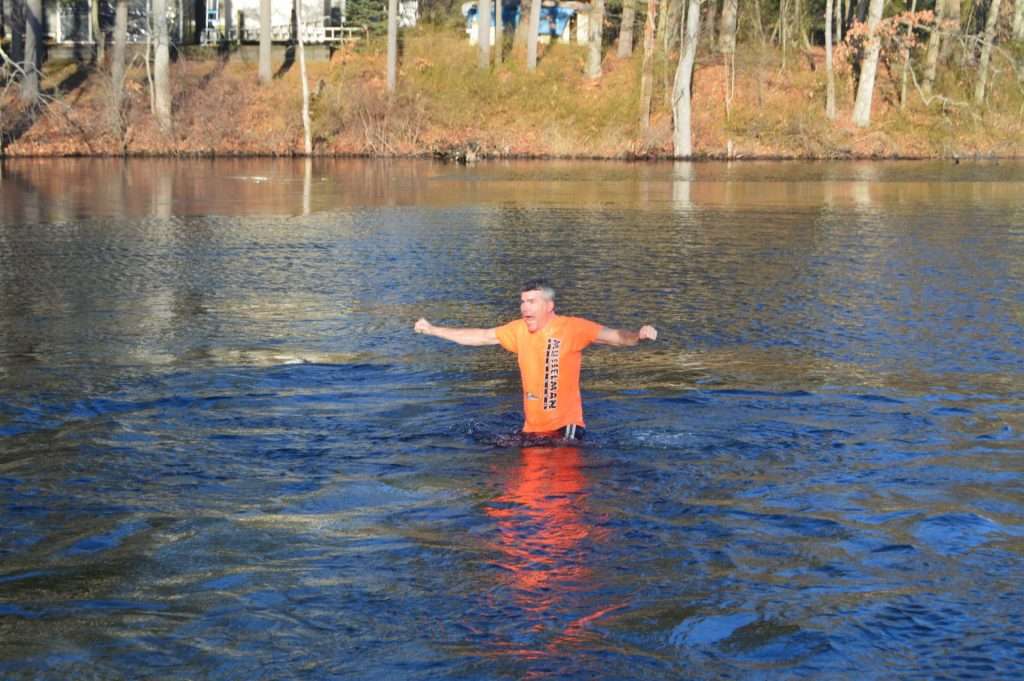 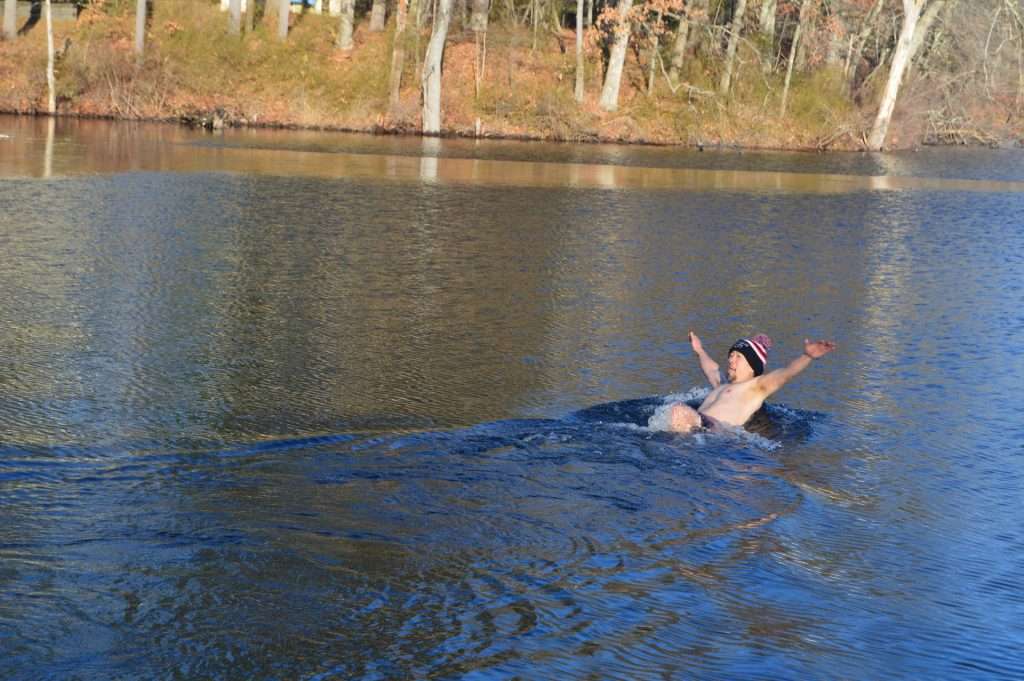 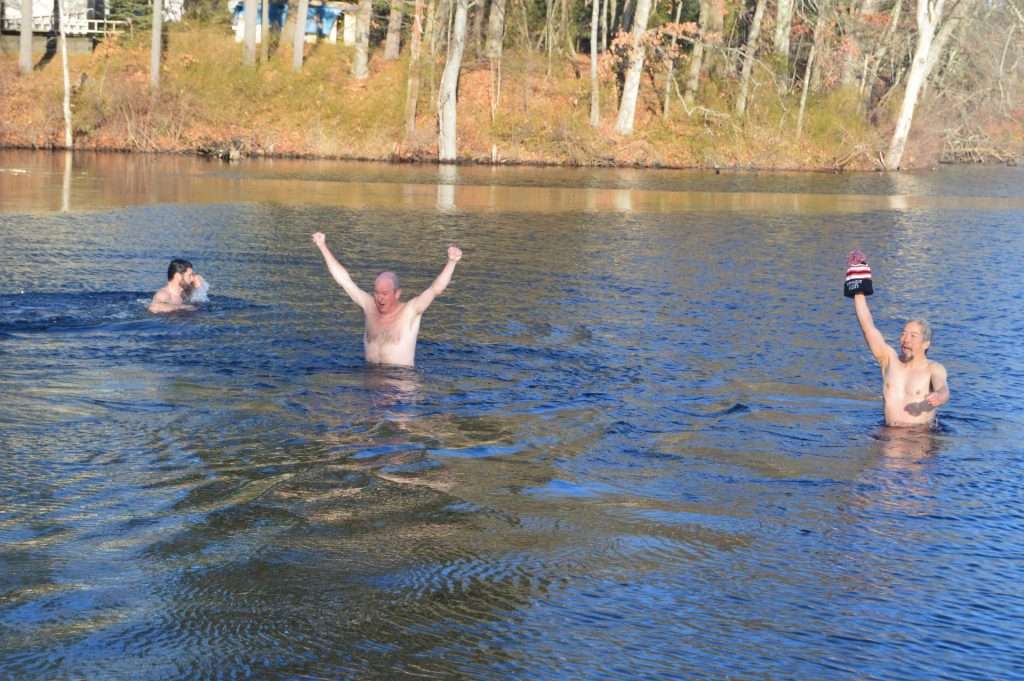 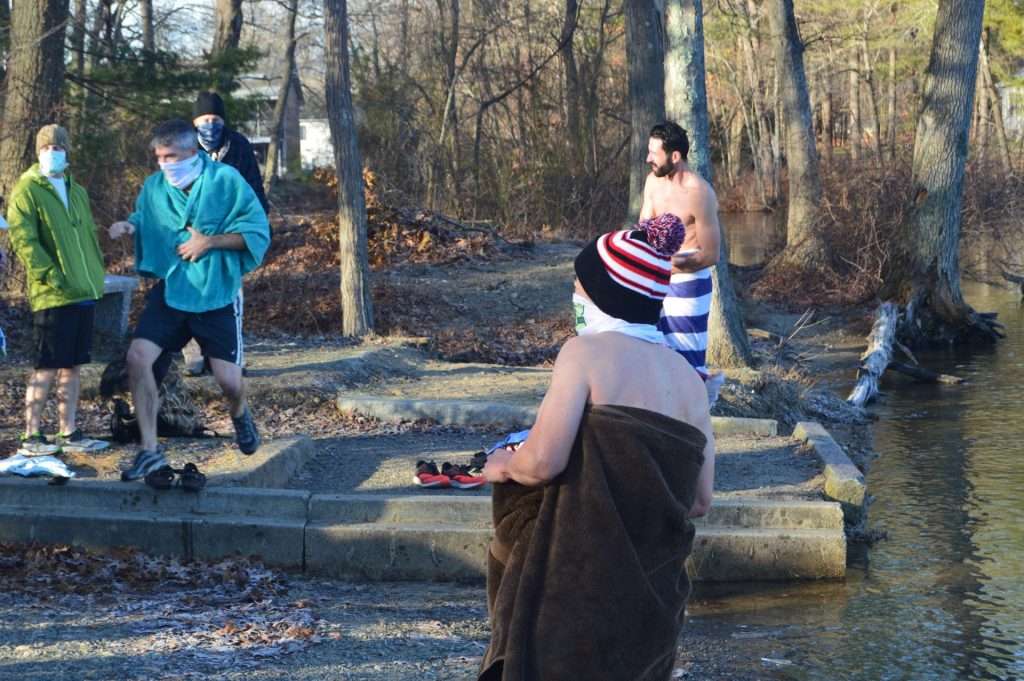 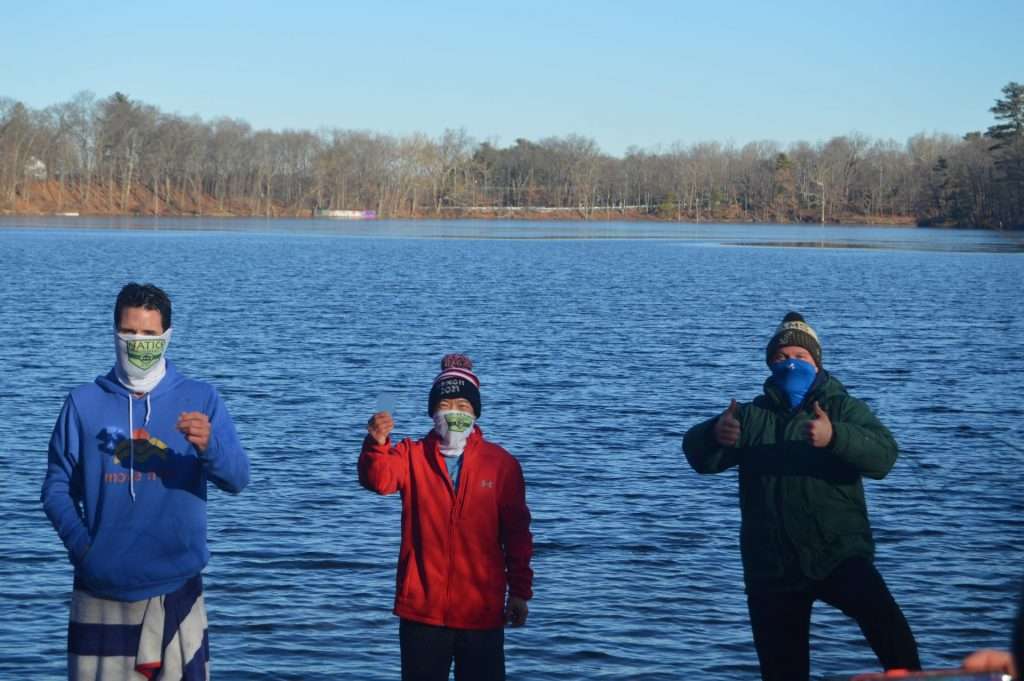 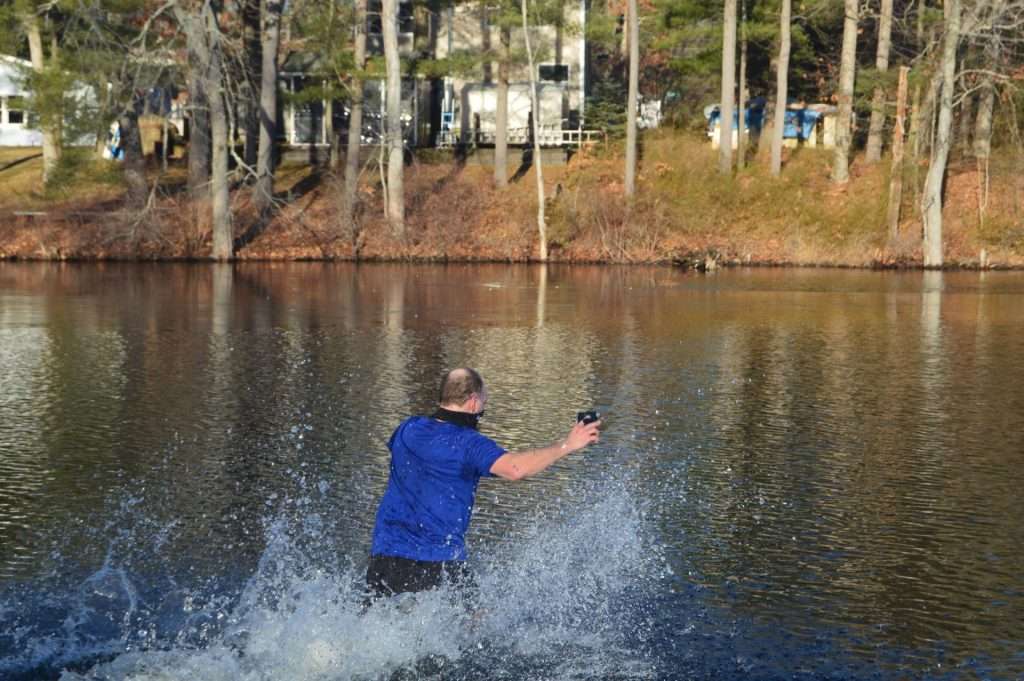 But wait! Your phone! “It’s waterproof….” 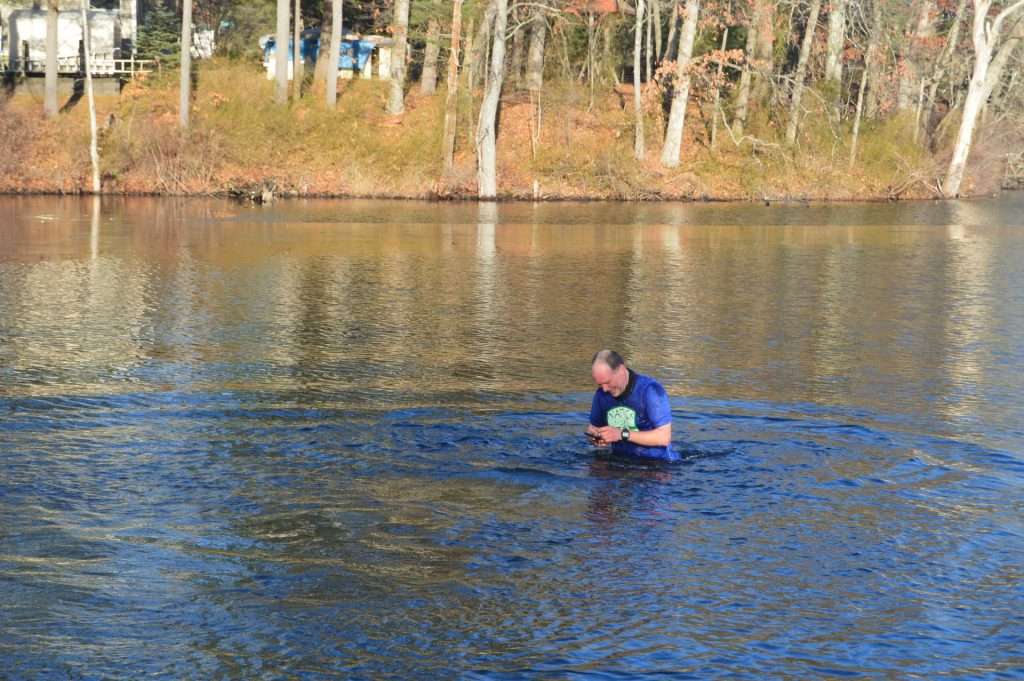 A reader with a sharp-eyed outdoor video camera sent us a clip of what sure looks like a bobcat sauntering through her yard in a heavily wooded area of South Natick, on the Sherborn line.

Bobcat sightings are nothing new in the deep recesses of South Natick. Police have been fielding calls about the shy carnivores for at least the past several years.

Natick Animal Control Officer Keith Tosi says that there are several bobcats living in Natick. “I have witnessed one on one occasion,” he said in an email. “Unfortunately the poor fellow got hit by a car on Route 27 on the Sherborn line.”

Tosi says that residents do send in video and pictures of bobcats roaming. “They seem to be minding their own business and doing their thing, which is great.”

The Natick Bobcat, as he is called on a twitter account set up by a fan, is currently known as the “Aggressively socially distant handsome fellow from S. Natick.”

The handsome fellow was probably on the prowl for a small-game meal of mice, rats, squirrels, chickens, small fawns, wild birds, or rabbits. He would also happily snag a cat or small dog if one happened along, so pet owners should take appropriate precautions.

As for what bobcats should watch out for, besides humans driving on Route 27, coyotes are likely their major concern in this area.  Those big fellas might try to take down a 20-lb. adult bobcat, but would be even more interested in the easier meal of a bobcat cub in spring.

It’s a wild world out there in South Natick. 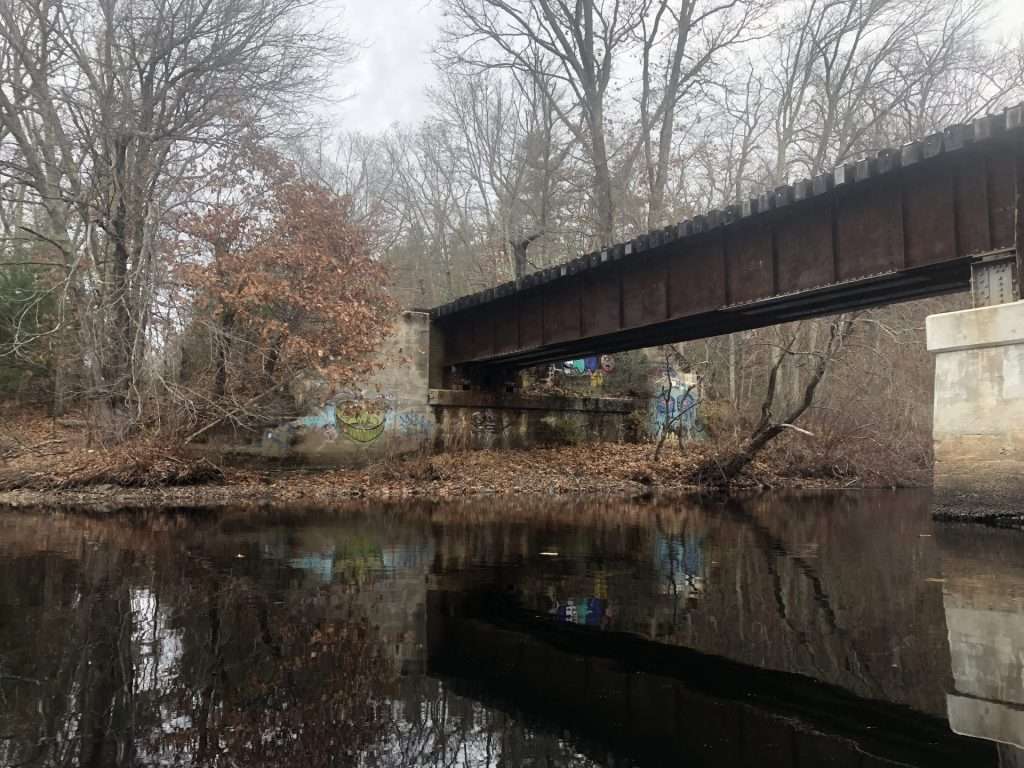 With the trees, aside from laggard oaks, largely bare, we could spy treasures along the river bank that might be obscured during other seasons. These included myriad bird nests, including those of orioles and robins, as well as wasp nests closer to the water than you might expect. 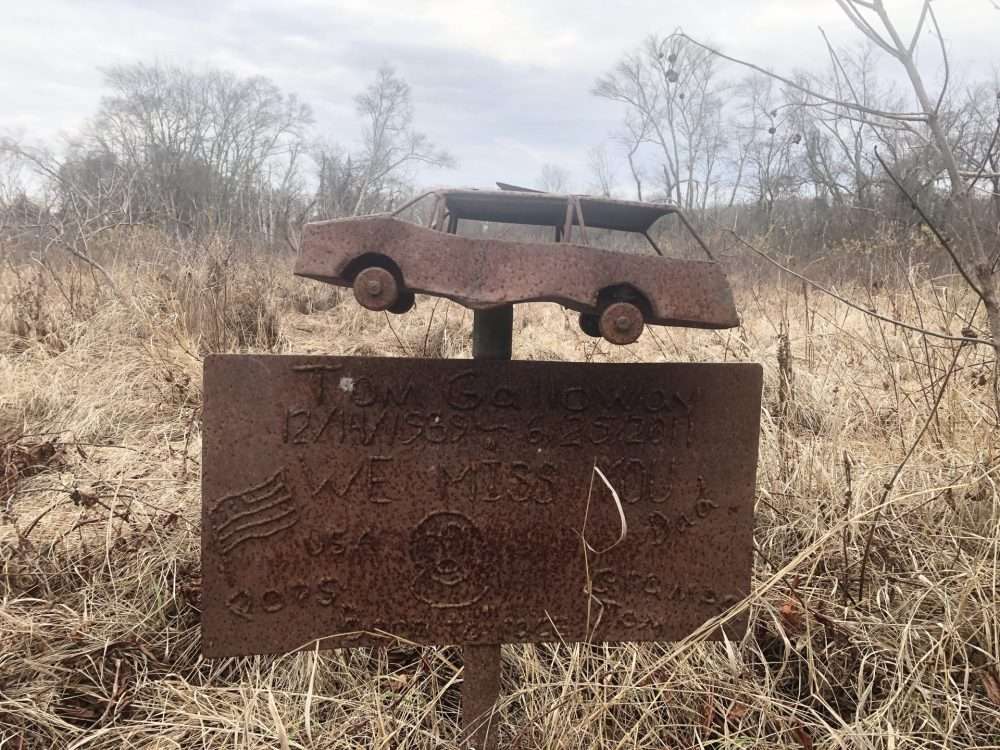 Our trip turned more lighthearted from there. We ran across a fellow kayaker who alerted us to a rope strewn across the river’s surface connected to another kayak. It was being hoisted up a steep embankment as part of a local Amazing Race type of event. 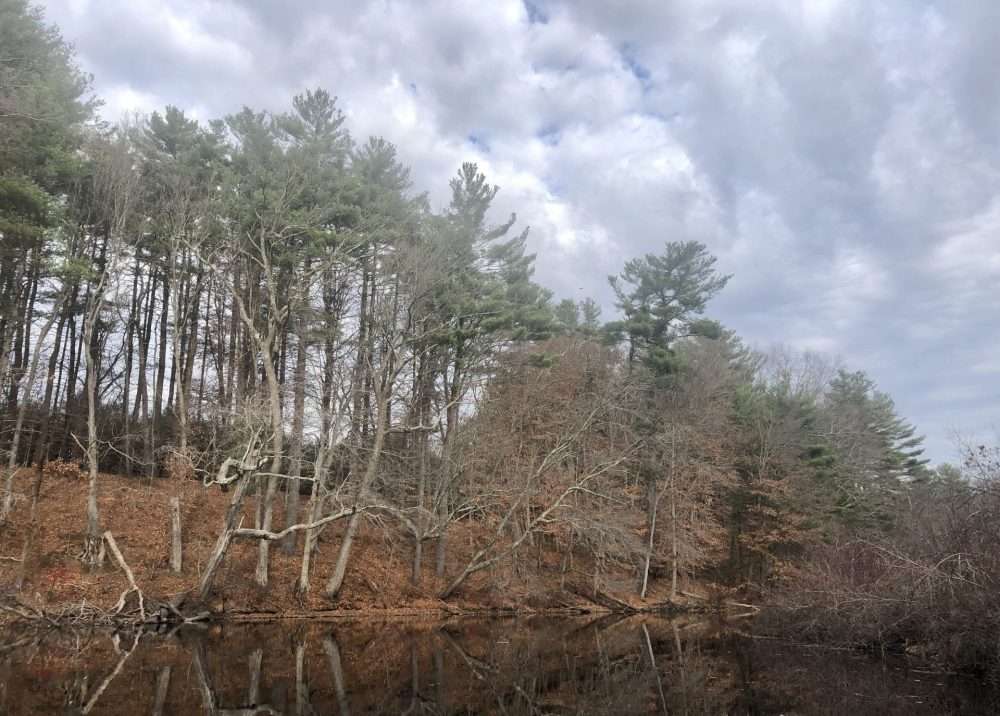 Further along the river we passed Broadmoor Wildlife Sanctuary, which we’ve experienced more often from land. It came up on us shortly after passing under the nondescript Farm Road bridge on the Sherborn/Dover line. We ogled houses small and large, some with spectacular party decks and fun boats/docks on properties sited on Glen Road’s offshoots, such as Yorkshire and Indian Ridge, and Eliot Street/Rte. 16. 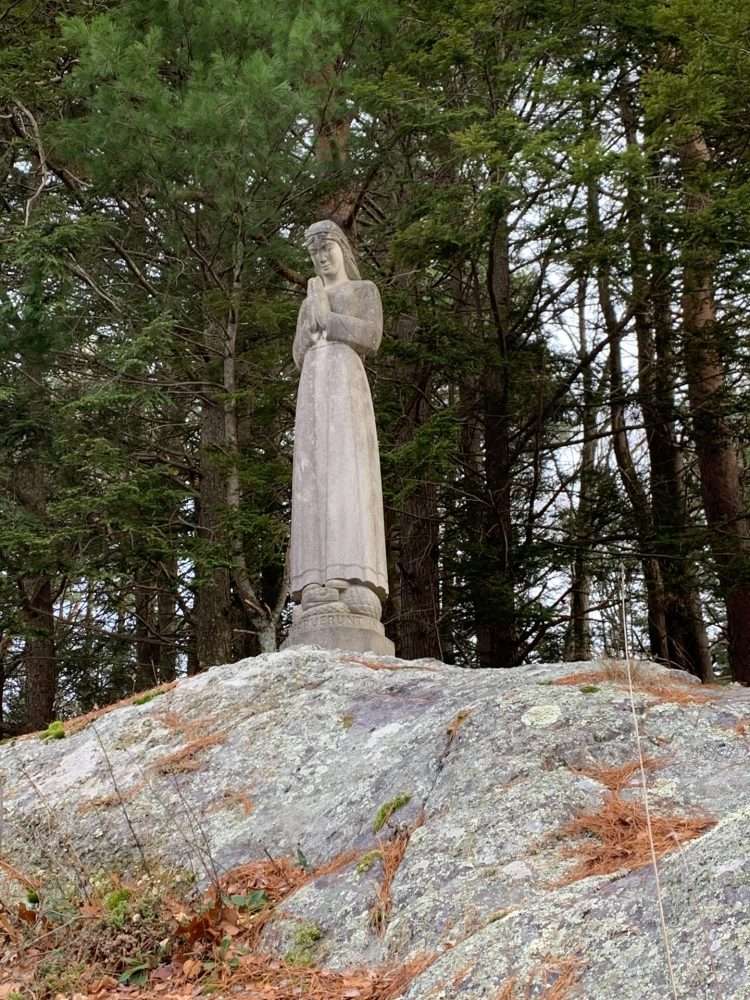 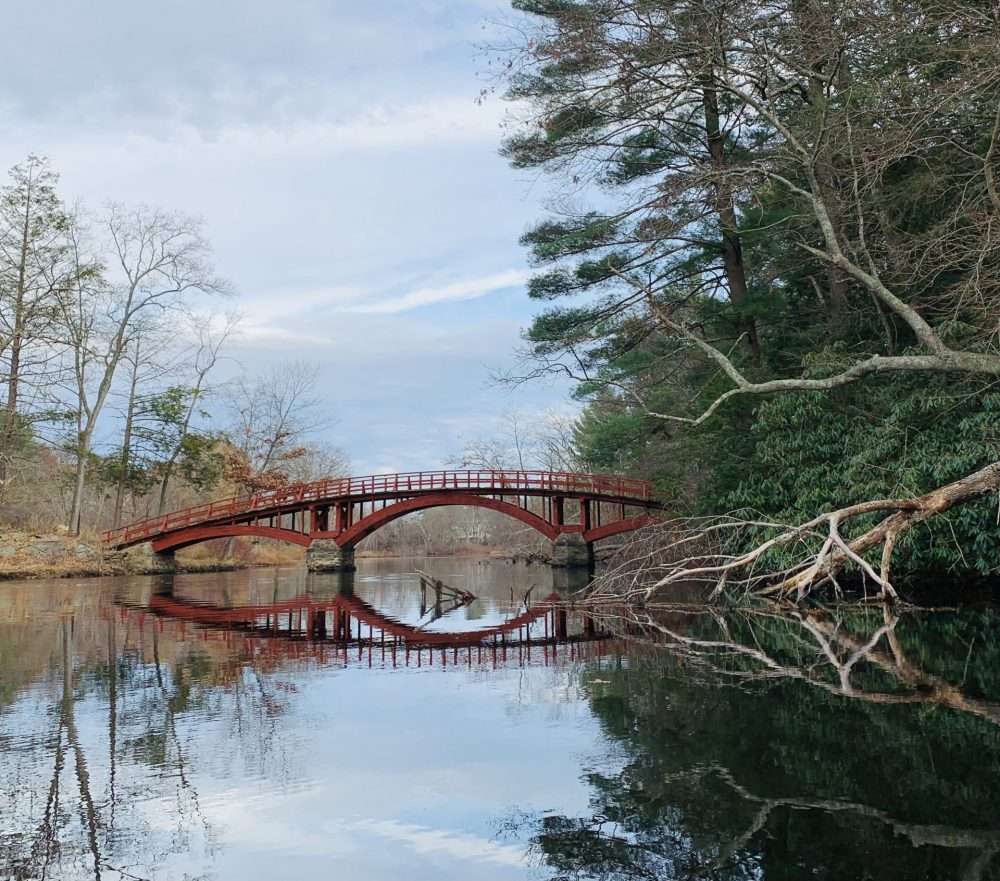 Natick Historical Society has a good write-up the statue and bridge. The abbreviated version is that South Natick resident Daniel Sargent, a poet-author-historian, placed the Indiana limestone statue there in 1929. “The words carved at the base of the statue are ‘Apparverunt in terra nostra flores.’ This can be translated as ‘flowers shall appear on our earth,'” according to the Society, which notes that Sargent planted rhododendron along the river bank. Those 100+ year plants look to still be going strong. Sargent and his wife Louise originally bought their river house as a summer home, but then bought property across the river from it. The red bridge was bequeathed to Sargent in the will of a friend, and he used it to connected the two properties, according to the Historical Society. The bridge is a sign that the South Natick Dam and spillway are coming up shortly. This is where knowing the river is important, as it’s easy to imagine someone just boating right down the waterfall. There’s no real sign it is coming other than the Pleasant Street bridge, and by then it could be too late. Head to the south river bank where the tall pine of pine trees stand and pull out of the water. 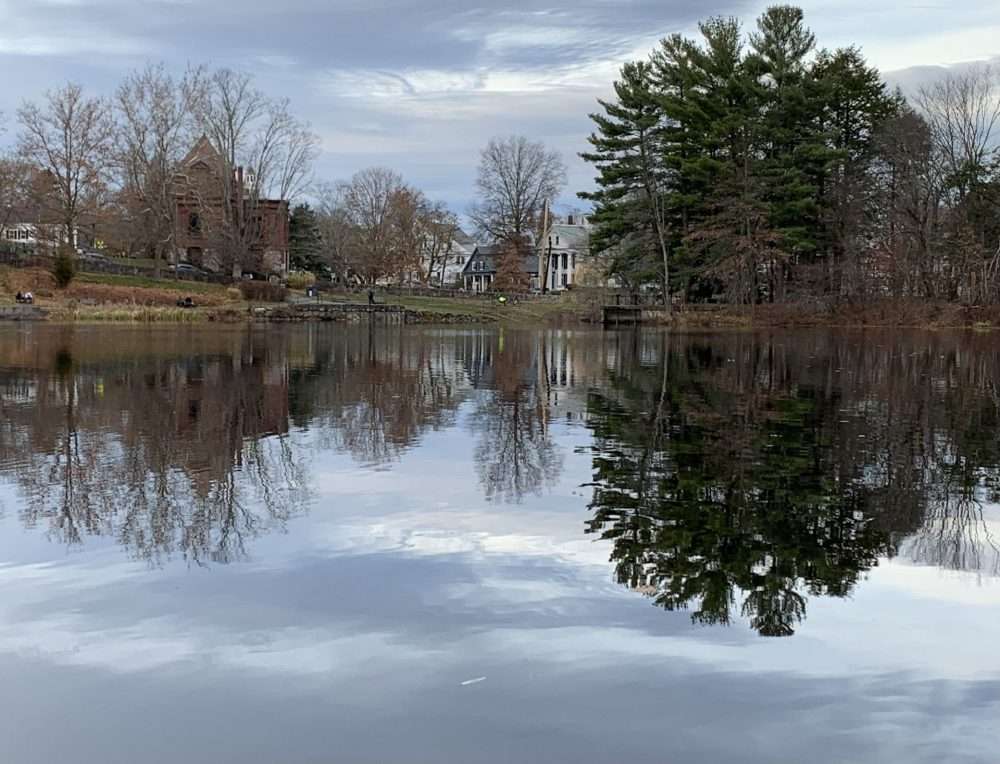 If you seek to continue down river, just drag your boat down a short path below the spillway and keep going through the arches toward Elm Bank Reservation. More: Kayaking Lake Cochituate in (mostly) NatickKayaking at Natick’s Fisk Pond: Not what I expected