The owner of 200 Pond Rd., a property that boasts a Wellesley address though mainly falls in Natick, will look to Natick Spring Annual Town Meeting to approve a zoning bylaw amendment that could pave the way for an assisted living development atop the scenic road.

As we reported this past summer on our Swellesley Report, the Wellesley Senior Living project being discussed at that time could change the scenery at the top of Pond Road, near Rte. 135, dramatically—again. The previous owner of 200 Pond Rd., which sold it to an investment firm, also owned adjacent property sold to a developer who built 2 large homes very close to the road, much to the chagrin of Pond Road neighbors. Whoever buys those homes could be in for a bit of construction noise if the senior living plan comes to fruition.

According to a presentation shared by the development team last year with Wellesley town officials, plans are to build a multi-story, 130,000 sq. ft. assisted living and memory care facility where a 10,000-plus sq. ft. Georgian Colonial estate with a pool and tennis court now stands. That 1990 home, on property spanning some 9.6 acres, has gone on the market in the past for nearly $10M.

This facility would be about a mile down the road from the new Anthology senior living facility in Natick on Rte. 135.

The draft citizen petition, submitted by the petitioner’s attorney, seeks the following:

B. To amend the provisions of Section III-I.3 Assisted Living Overly Option Plan as necessary and desirable to allow for the inclusion of the above property into the ALOOP use district.

The petitioner needs to provide information about the article to the Select Board, which would then put this on an agenda for a open meeting. It would then be referred to the Planning Board for a public hearing that would be advertised in a print newspaper that no one would see. Though abutters would also be alerted.
After the hearing, the Planning Board would make its recommendation to Town Meeting (the Board would not be the sponsor).

A listing of Natick residential real estate sales (for more than $100*) recorded at the Middlesex South Registry of Deeds:

*There are many deals for $100 or less, often involved in trusts.

While I fancy myself a wordsmith, I’ll acknowledge being a fan of Natick Director of Assessing Eric Henderson’s number-stuffed but relatively accessible annual tax classification hearing presentation (view at 36-minute mark of Natick Pegasus recording).

The goal of this hearing is getting the Select Board to vote on a “residential factor, which is a simple term for saying whether we’re going to do a single tax rate or a split tax rate,” Henderson says. This enables the Natick Assessors Office to determine how much of the tax levy will come from each class of real estate and personal property.

Natick’s total assessed property value for fiscal year 2023 is about $10.7B, up roughly 9% from the previous fiscal year. “While our commercial market has maintained very well, our residential market has been explosive, I guess is the best word,” Henderson said.

The residential tax rate has actually fallen to $12.64 from $13.34 per $1,000 of property. While this is good, the average tax bill will rise because property values have increased. Natick’s average bill for a single-family home will shoot up by about $440. Come July, tack a 1% surcharge onto real estate bills (with a $100K exemption) as a result of the Community Preservation Act passing in town, and you’re talking another $60-$70 on average.

Henderson put in a plug for deferral programs available through his office to seniors and others who might struggle to pay their property taxes.

Splitting the tax rate would shrink the residential rate by $1.43 and raise the corporate rate by $6.32. Less than a third of Massachusetts communities chose to split their rates, and there is very little shifting year to year. The Select Board expressed no appetite to make a change.

Select Board member Bruce Evans said: “What’s compelling to me is it seems on the surface a good idea to have a split tax rate, but in reality it doesn’t work well with a community that has an 80% residential and now 81% [tax burden]. It shifts the burden from some residential taxpayers to commercial taxpayers, and included in that commercial taxpayer base are residential rentals, and that has a huge impact on low and middle income families who aren’t homeowners, and we have to represent those people as well as homeowners.” Small businesses would take a disproportionate hit, too, he said, as the Board voted 4-0 to keep the single rate.

Not to bury the lead, but there were a couple of them during this Select Board meeting. So there.

Natick Town Administrator Jamie Errickson followed Henderson with a high-level town financial overview, building on information from the assessor that the town didn’t even spend its entire levy thanks to it being an unusual budgeting year that included the surprise ability to use American Rescue Plan Act funds to cover lost revenue during the pandemic (parking fees, etc.). As he said, the town has been learning new things about its financial situation month to month and week to week.

Natick took a conservative approach with its FY ’22 budget coming out of the heart of the pandemic and its current FY ’23 budget, and wound up underestimating some of its receipts. It also didn’t wind up spending as much on personnel as might be anticipated because qualified people were so hard to come by in light of changing workforce dynamics.

The town recently learned that its free cash (watch a Massachusetts Division of Local Services video about this concept) was higher than usual, at about $11.4M. Errickson called that “an extremely high number” for a town like Natick that’s more typically in the $4M to $6M range. While this gives the town flexibility, it also means it hasn’t been hiring some key positions needed to deliver services. Another strong free cash year is expected next year, too, he said.

Errickson’s team is still digesting the latest data and plans a more formal presentation at the start of the new year for the Board and public. Free cash is sometimes used for operational expenses, sometimes for capital spending, sometimes for stabilization.

The town is also looking at what it mean mean for the tax override discussion that the Board has been having over the past year-plus.

“The reality is that from an override perspective, having that free cash number and seeing where our local receipts are already starting to come in… we are very optimistic that in FY ’24 and for the foreseeable future we will not have to actively pursue an override,” Errickson said.

However, the town is doing an analysis to see when an override might be required, he said.

Board Chair Paul Joseph warned: “Just because we don’t need one now doesn’t mean structurally anything’s changed. It’s just circumstances because of this free cash number and some unanticipated numbers due to good conservative planning, we’re able to at least not have one next year and it gives us more time to kind of look responsibly at the future.”

The Natick Select Board now has 4 proposals in hand to mull for the possible sale and future use of 5 Auburn St., which includes a distinctive 3-story, roughly 14,000 sq. ft. brick building that has served as a school for most of its 100 or so years. The board has about 6 months to make what Town Administrator Jamie Errickson termed “a pretty big decision,” and will proceed with rankings, interviews, and maybe even field trips to applicants’ other projects in the weeks and months ahead. 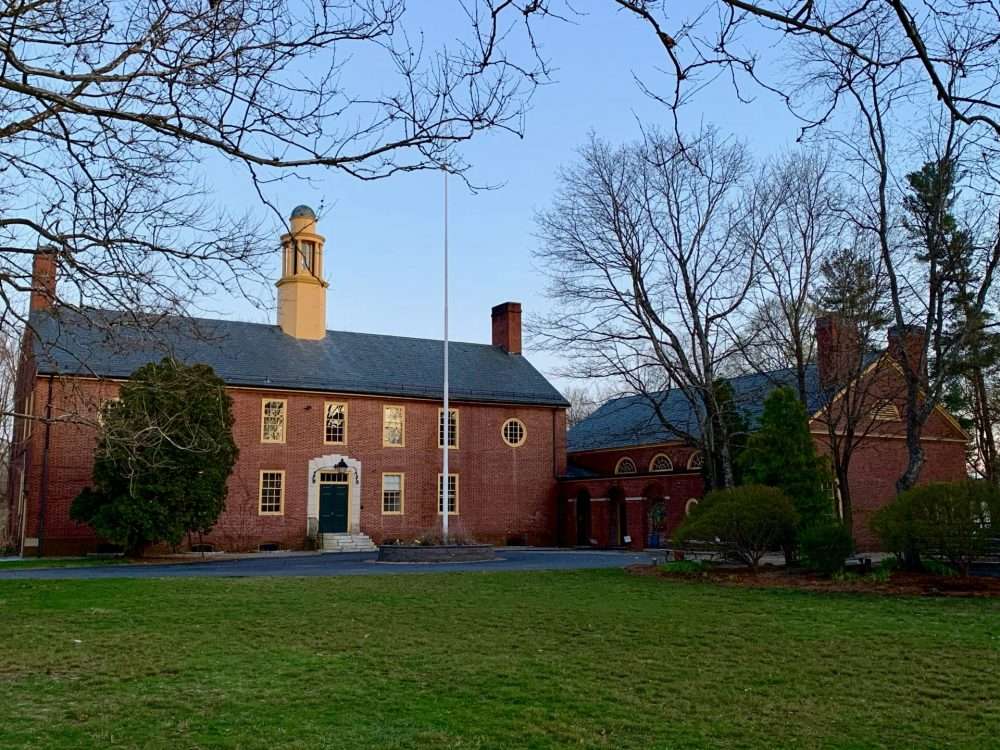 The offers from those responding to the town’s request for proposals (RFP) for this property in the John Eliot Historic District range from $1 to $2M, and the uses pitched include an autism center, affordable housing, and duplexes. (Wow, not a single bio lab among them….well, the property is zoned for Residential General.).

Natick issued the RFP in early September for the property, assessed for about $3.8M by the town.

Fall Annual Town Meeting voted last year to authorize the Select Board to sell or otherwise transfer (“dispose of”) the 2.8-acre property at 5 Auburn St., which as we heard during Auburn Street RFP Committee meetings might look nice on the outside but needs lots of work inside to make it usable for most purposes (including Americans with Disability Act compliance). The selection criteria for the Select Board does include the extent to which a proposal preserves the existing structure and the open space along Eliot Street.

Changes to the property, which sits less than a half mile from the South Natick Dam park, would mark another big transition in this part of town in light of the Select Board’s recent decision to remove the spillway (aka, waterfall).

WBZ-TV goes inside an 18th century Natick home on Winter Street that’s on the market for $850K.

Separately, WBZ NewsRadio reports on a 1738 home on Frost Street that’s also on the market, for $1.25M.