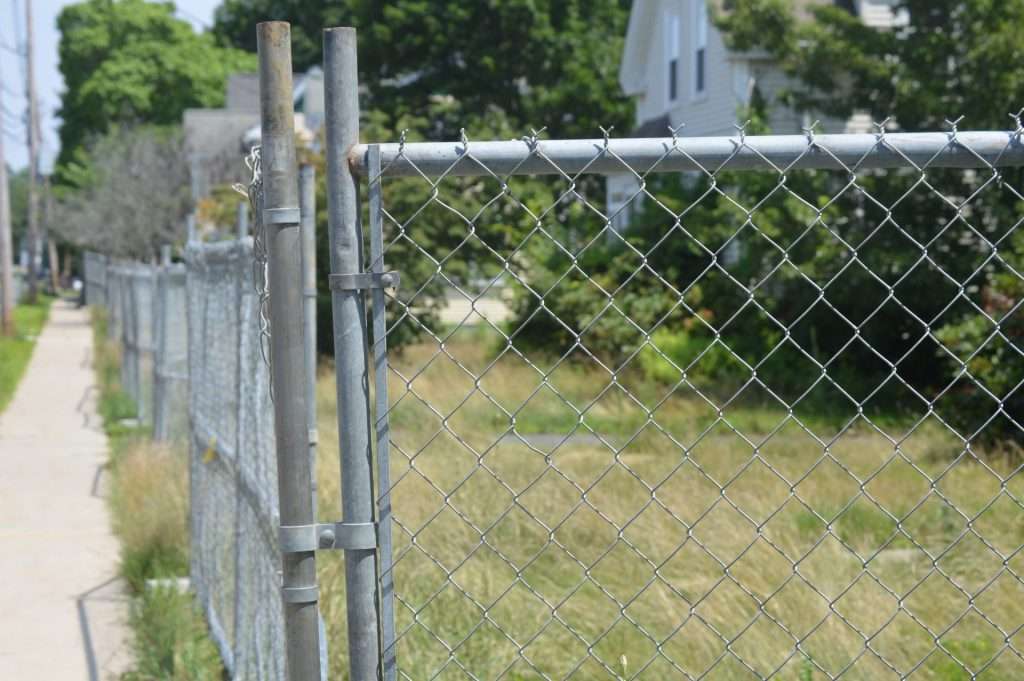 We can debate all day whether this spectacular stretch of galvanized steel wire mesh is more or less stunning than the Natick Center display that promises to be home in the future to an enclave of pop-up shops or the now covered fencing outside the former St. Patrick’s complex, the site of a future mixed use development. You may even ask: Which is the weakest link?

But the important thing to know is that the homes fenced off and set to be leveled this coming week on East Central will pave the way for an assisted living development that prompted one online observer to quip: “We’re going to need a bigger senior center.”

The last time we recall hearing discussion of this project was at a mid-February Planning Board meeting under the agenda item dubbed “ALOOP (Assisted Living Overlay Option Plan), 119, 121, 123, 125 & 131 East Central Street.” Michael Duggan of a project developer called Anthology said the contractor hoped to start construction by this May or June. We’ve reached out to Anthology to ask if there’s a site update anywhere online that we can point you to, and will update this post if we hear back about one.

The project was earlier brought to the Planning Board in 2019 by Barberry Homes, which outlined plans for a 95,180 sq. ft. three-story building containing 86 assisted living units and 50 parking spaces. Anthology took over this project. 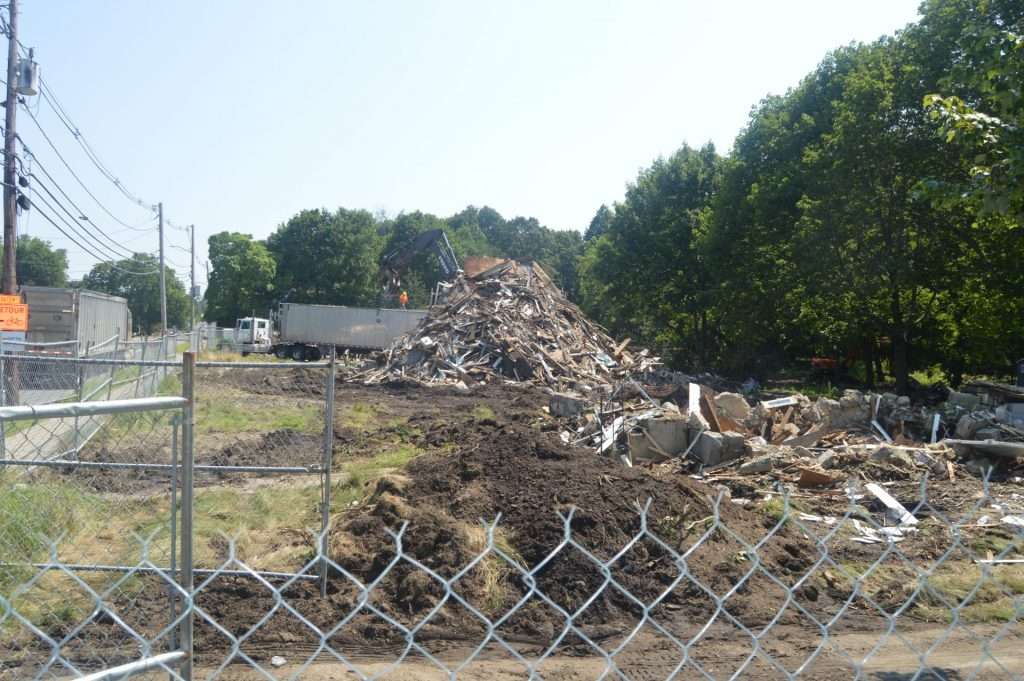 Read on for a round-up of other chained-off areas of Natick. Admittedly, none of these is too edgy…didn’t spy any barbed wire, for instance:

Stonegate Group recently gave an update on its project at 45 East Central St., the location of the former St. Patrick’s School, where a mixed use development is being erected.

The developer says its current proposal for the property consists of restaurant and retail space on the ground floor with residential units above in the main building. Four residential buildings will sit in the rear (Lincoln and Wilson Streets). The housing will include a mix of affordable and market rates.

An underground garage is part of the plan, too.

Stonegate has wrapped its fence in a handsome dark green nylon covering to give it less of a metallic look. 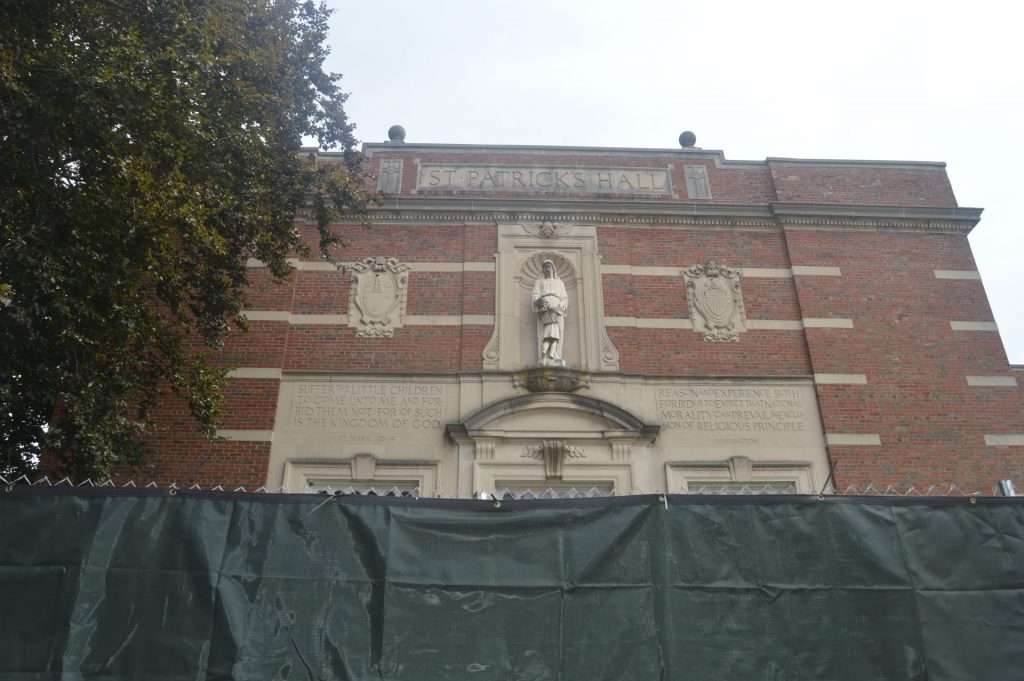 This project, which nearly imploded earlier this year at the Planning Board stage, will consist of a bunch of 500 sq. ft. pop-up spaces, ideally for artisans.

The developer tonight (July 22) is slated to go before the Natick Design Review Board to show its latest plans for this one-story, 5,342 sq. ft. retail structure and other site improvements.

This development rises from the ashes of the devastating fire in July 2019 that ruined numerous businesses. 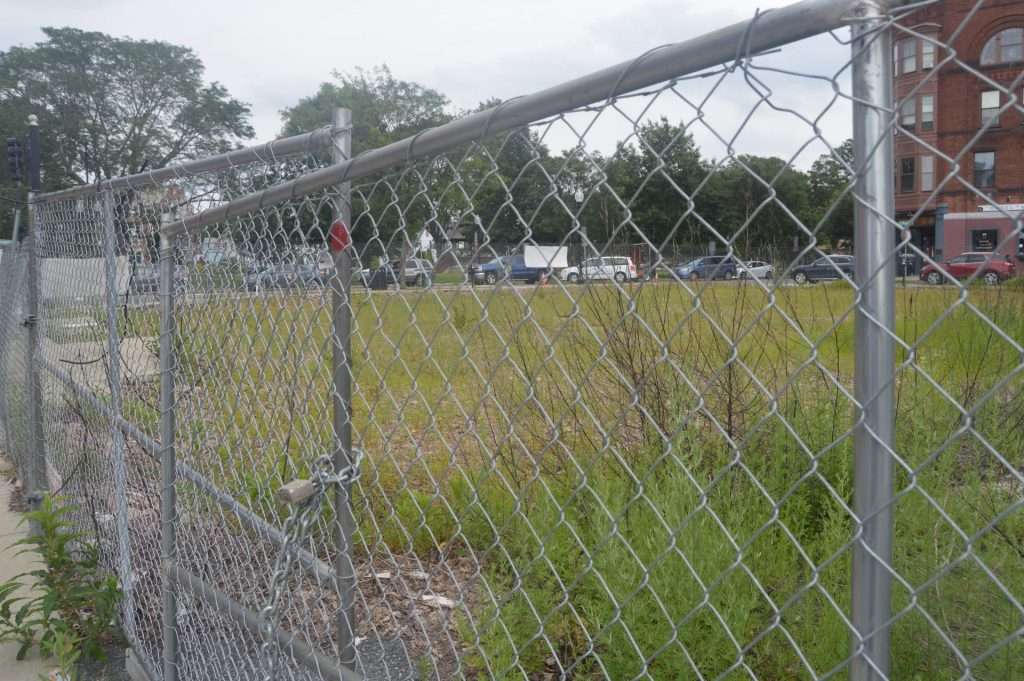 The chain link fencing that previously blocked off the Rte. 30 bridge has been moved to the side, leaving the fencing at the Rte. 9 bridge as the only obstacle standing in your way of traversing the route from Natick Center to Saxonville.

Expect this fence to be removed later this summer, though the contractor may still block access here and there as it puts down lines, erects safety screening, and makes other final touches. Keep up on Cochituate rail trail progress on the Natick town website. 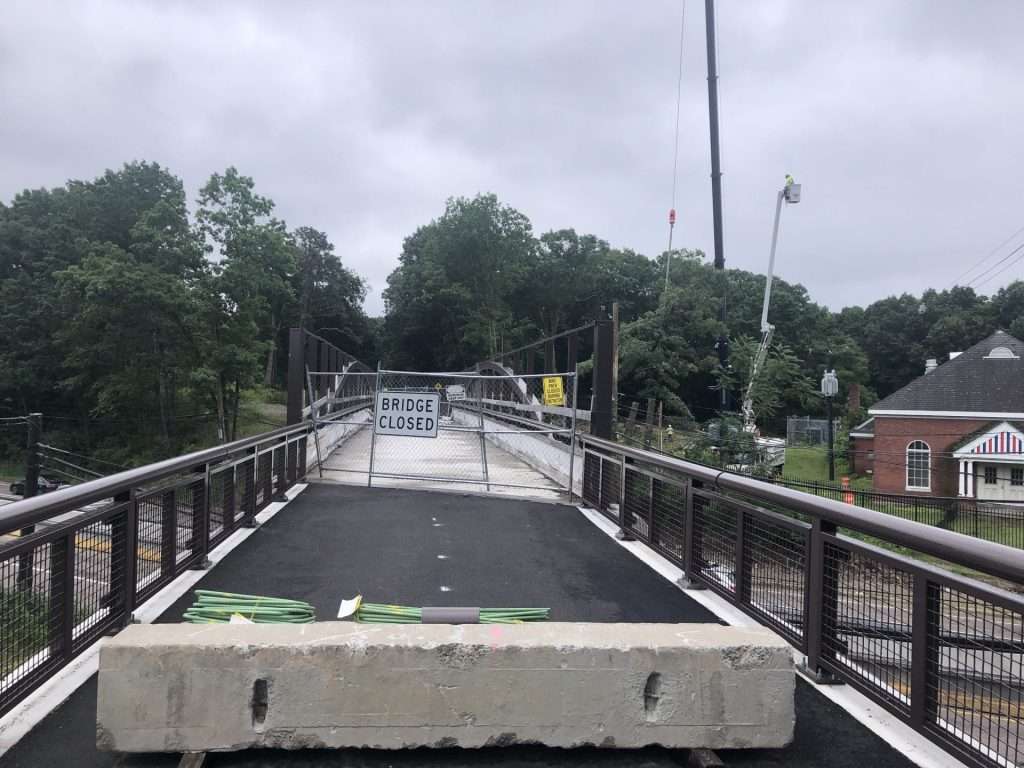 Speaking of the rail trail….The Natick Center station is one of the MBTA’s busiest along the commuter rail, and it’s putting $36 million into improvements that focus on accessibility.

Work began in early 2020, and the goal is to finish the project next year. There haven’t been a ton of pesky commuters to get in the way of work during the pandemic, so it looks like it’s coming along well.

Construction is currently in Phase 3, which includes replacement of the pedestrian bridge, elevators and stairs from street level to the station, and installation of elevated platforms. 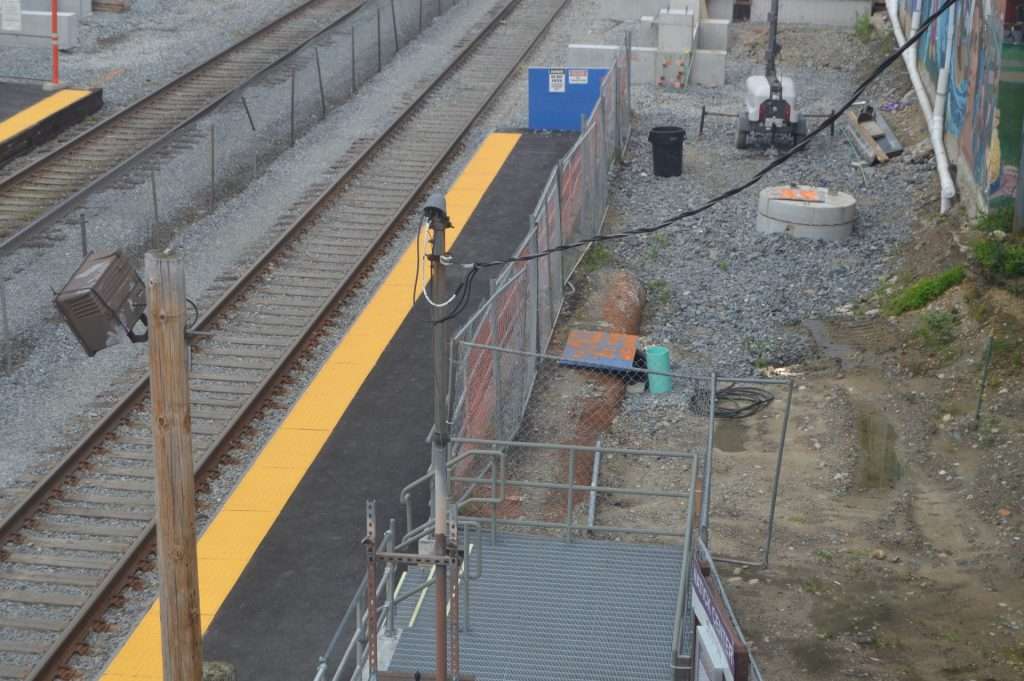 The state transportation bond bill from January authorizes $3 million in spending to reconstruct and repair the Boden Lane Bridge next to the West Natick commuter rail station. The town awaits a  notice to proceed on this.

Some neighbors would love to see the bridge stay solely a pedestrian walkway, as it is now, enveloped in chain link fencing.

Across the Boden Lane bridge in Natick pic.twitter.com/QH4BrHhi46

The bridge closed to vehicles in 2019 after a work crew damaged it. 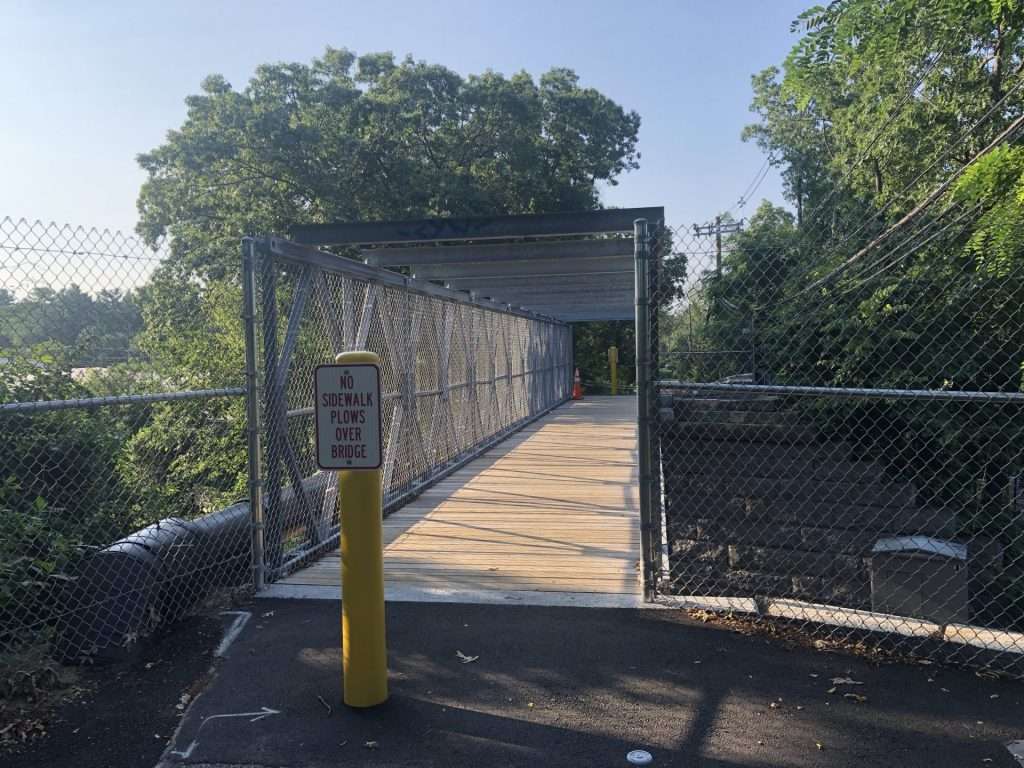 We can only assume there is more chain link fencing beyond the signs warding off visitors this summer while work continues on the new Kennedy Middle School, which opened in January. 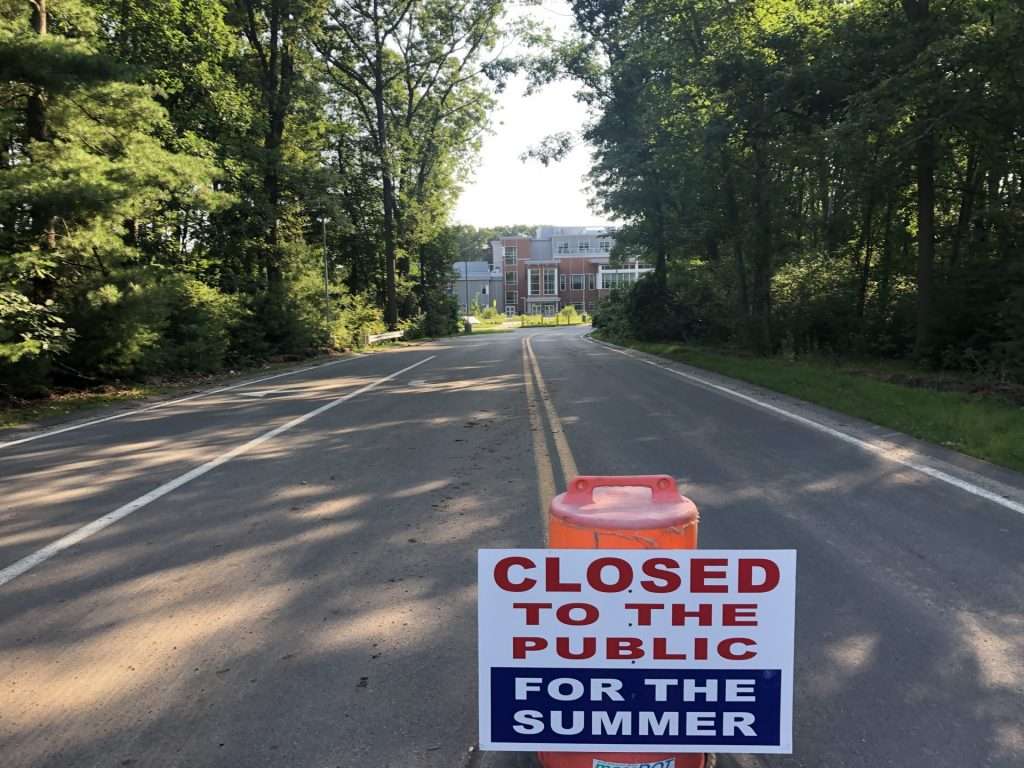 But we are left with a good chunk of chain on Mill Street where vehicles, equipment, and for some reason shopping carts, collect. Updates (kind of) on the project. 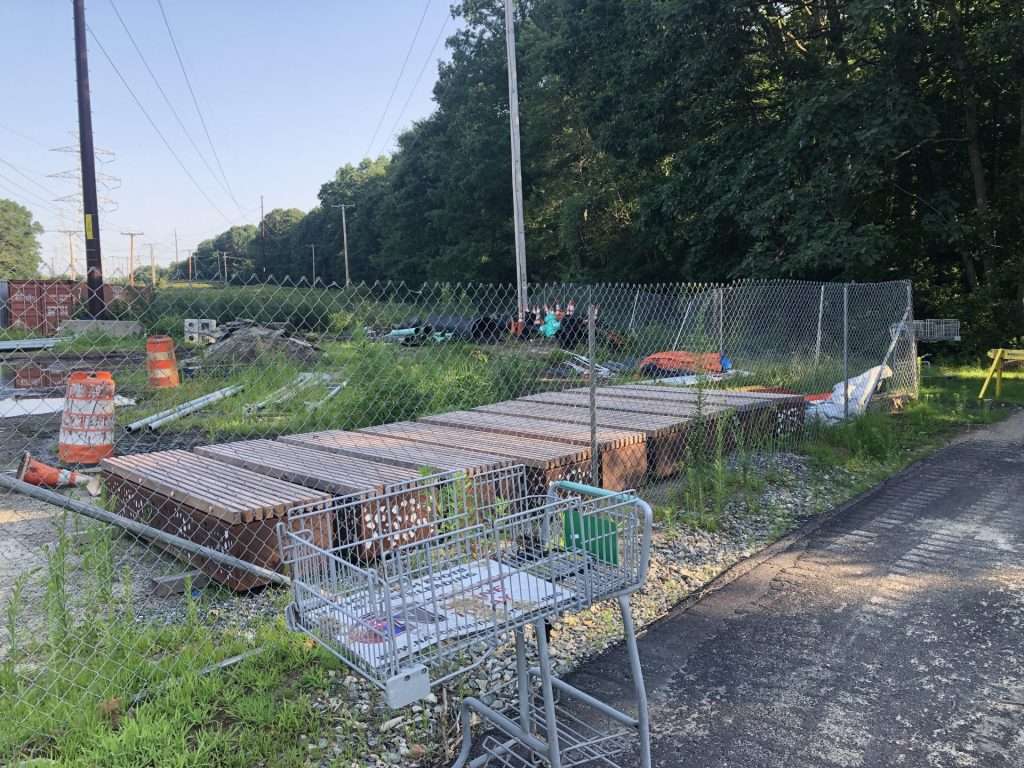 Zeta Fencing, which has been teaching the art of swordmanship in Natick Center for years just across the street from the One South chain link fence, doesn’t have a chain link fence of its own.

Alas, the Olympic-caliber business is moving to Ashland come September.

OK, what did we leave out….? Easy enough to add stuff. Let us know: natickreport@gmail.com

And now, a closing musical number on this theme…

Stonegate Group will host an information session for the public on Tuesday, June 29, on the St. Patrick’s school mixed-use redevelopment project at 45 E. Central St. in Natick. The session will be held at the Community-Senior Center at 117 E. Central St., from 5-8pm.

According to Stonegate’s website, the plan is for restaurants and retail space on the ground floor with residential units above that in the main building. Four residential buildings will reside in the rear of the property along Lincoln and Wilson Streets, including a mix of affordable and market rate units. A parking garage will be underground.

Take a peek at the plans below. 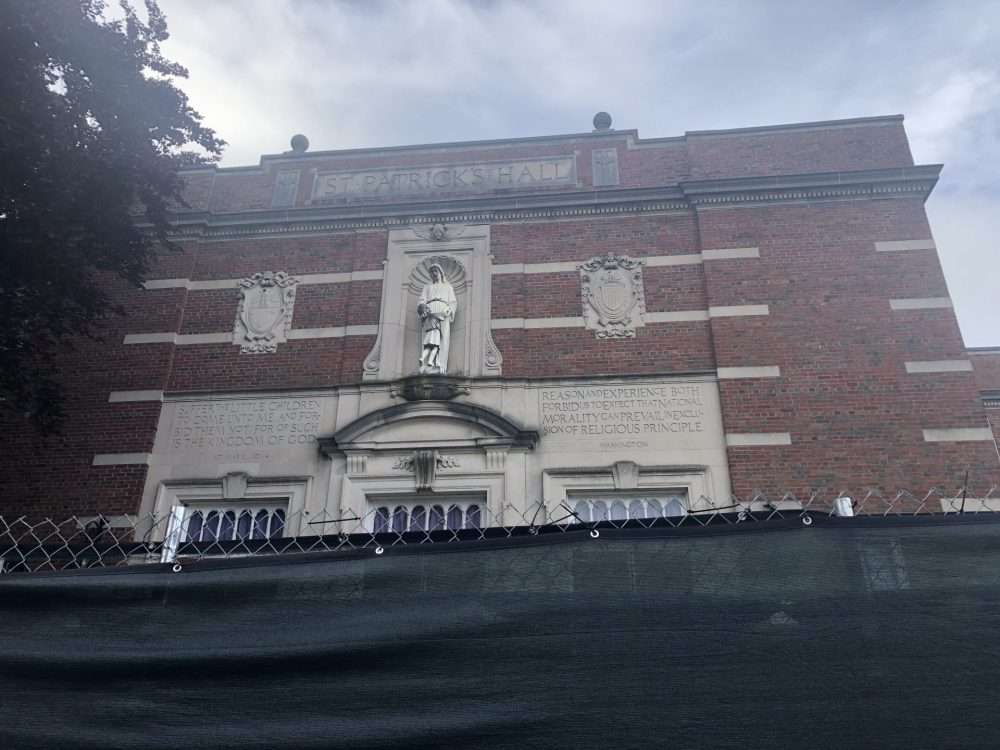 The draft of Natick’s Housing Production Plan refreshed with new data for 2021 has made its way through town boards a little later than planned due to the pandemic. But the plan has arrived in time to help the town lay out its goals and the strategies for reaching them in years to come.

The plan, now in the hands of the Commonwealth’s Department of Housing & Community Development, was sponsored by the Natick Affordable Housing Trust. It’s an update to the 2012 plan, which is no longer viable, and was completed over 18 months by the Natick Community & Economic Development Department after a consultancy started the work. Public input was accepted throughout the process, including via forums.

Proactive plans like these show the state that communities are serious about having at least 10% of their overall housing stock deemed affordable (Natick’s at 10.67%) as is statutorily required. Communities below that figure are vulnerable to unfriendly 40B projects, often squeezed into spots with disregard for neighbors, and that give developers a break on zoning rules in exchange for including affordable units within their projects.

Most communities in this area, including Wellesley, have hit the 10% mark. Though Natick’s neighbor was under siege by 40B developers in recent years, because all surrounding communities had hit the threshold, until it too reached 10% and issued a housing production plan of its own.

Hitting the threshold and having a state-approved housing production plan gives communities “safe harbor” when it comes to dealing with 40B plans. Such plans outline how communities can maintain safe harbor even if their population changes. Natick awaits population numbers from the latest census this fall.

“Having this plan in place and current is a good backstop if we were to fall below the 10% safe harbor threshold,” said Ted Fields, senior planner for Community & Economic Development, in briefing the Planning Board (which like the Select Board, approved the plan). Hear his remarks beginning at about the 2-hour, 13-minute mark of the Natick Pegasus recording.

The housing needs assessment in the report confirms the obvious. Housing’s expensive here, there’s not enough affordable housing, and it’s hard for people to find suitable downsizing properties. On the positive side, Natick median gross monthly rent of about $1,400 is somewhat lower than that of nearby communities, and if you’re looking to sell your house, you’ll probably make a mint.

Strategies embraced in the plan include more flexible zoning, public education about the need for more affordable housing, the use of town funds and land to support affordable housing, and a comprehensive permitting approach.  Among ideas that could be considered are more modern town rules regarding accessory dwelling units, aka in-law apartments, that could be built into existing single-family homes.

Sometimes all these town plans and consulting projects can get blurred. One thing to note about the housing production plan is that it was crafted to sync up with the town’s 2030 master plan.

Images of The Block

A website that caters to entrepreneurs looking to showcase their offerings in pop-up shops is sharing renderings of what the building planned for 1 South Main St., might look like come early next year.

While the developer had loosely been referring to the development as a “pop-up hamlet,” it now appears that it will be called The Block. This is the plot across from Natick Common that was devastated by fire 2 years ago.

The idea is for artists and retailers to show off their stuff for relatively short money: $1,200-$1,400 a month for 500 sq. ft. “jewel boxes” of space depending on which of two floors and which street the space is located. The developer envisions a rotating cast of characters reserving the space. A courtyard will provide ambiance.

Visit the Popping Up Next site to get a glimpse of what the development might look like, and if you’re interested in getting a space, putting in your request.

Among the newcomers on tap for Natick Mall:

There was a 2-alarm fire at 18 Dover Road in South Natick on Easter Sunday night that sent flames high into the sky as responders doused the blaze. No one was hurt, and the owners of the 5-bedroom historic structure built in 1880 were not at home. Natick Fire Chief Michael Lentini said the cause has not been determined. The fire was called in at around 8pm, and firefighters had it under control by 9:30pm. They stayed on the scene until  after midnight

Wellesley and Framingham fire departments were on scene, and Wayland and Weston assisted with coverage. 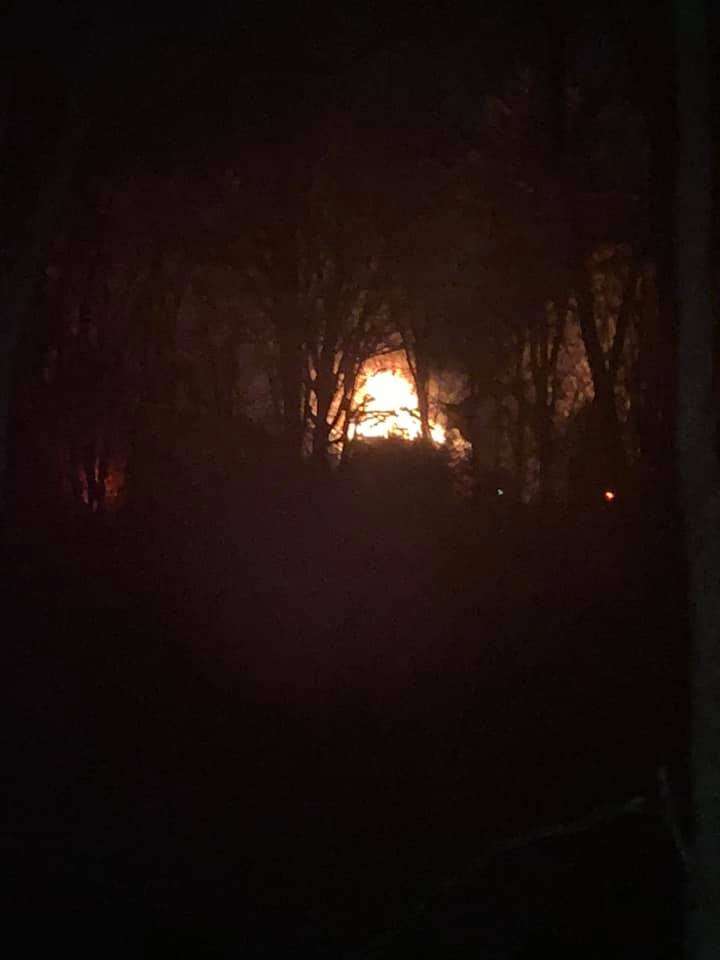 Last month the Natick Organic Community Farm’s barn burned to the ground during an early morning fire that claimed the lives of three sows and 13 piglets. No people were hurt in the 3-alarm blaze. The timber-framed barn, built after the Hurricane of 1815 using wood that was milled on-site from downed oak trees, was a total loss. 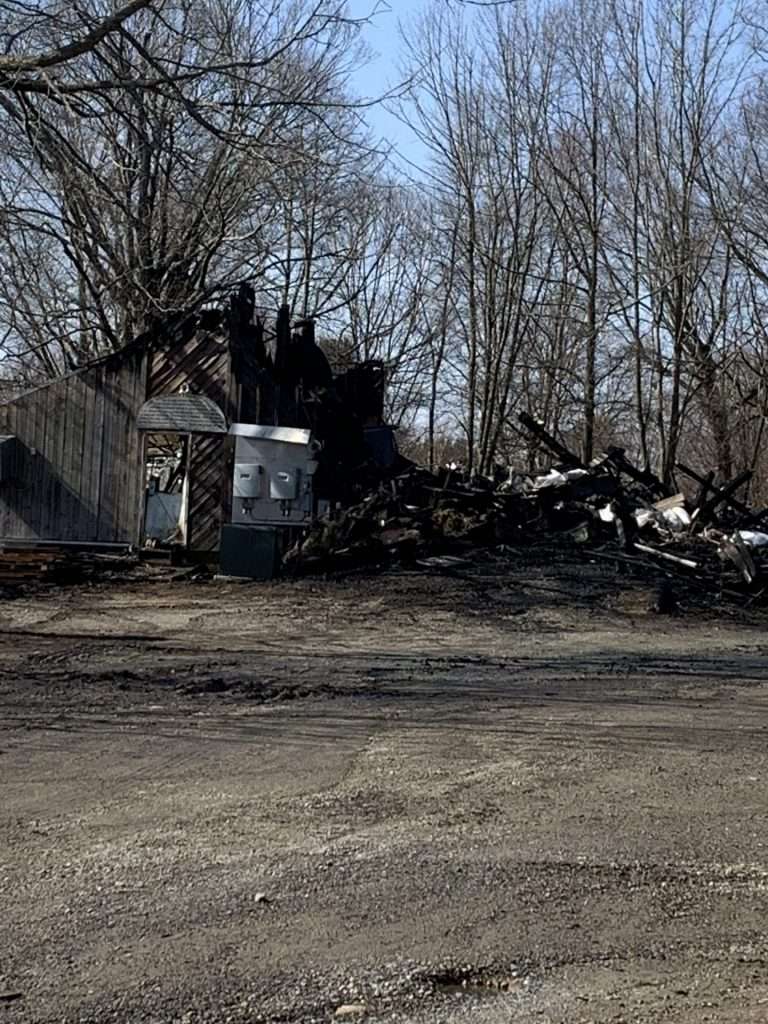