The questions about what the heck Detroit-style pizza is can now be answered by locals.

We were among the first to get a taste of Natick’s new Square Mfg. Co.‘s Detroit-style pizza and fixings during the eatery’s soft opening this week at 935 Worcester St. (Rte. 9 West) at a space formerly occupied by a Pizza Hut. Square Mfg. is initially offering takeout upon its soft opening on Dec. 4, but hopes to add delivery soon.

We took advantage of a friends and family offer, bringing home three small pizzas, breadsticks, a salad, and cookies—the only item not delivered in a box. Most of their small pizzas go for between $13-$15 and large ones for $22-$25.

As someone with a tomato-free diet, I typically avoid pizza, but was pleasantly surprised to see Square Mfg.’s pizza menu divvied up between “Red sauce on top” and “No red sauce.” I ordered a white one with bacon on it, just to avoid any pretense about calorie concerns during this meal.

This was my first Detroit-style pizza, which Square Mfg. describes as “crispy on the edges but fluffy on the inside, just like Detroit.” I’ve only been to Detroit once, to catch a couple of Red Sox-Tigers game during the Pedro Martinez era, so I can’t speak expertly about the city. But I can vouch for the pizza being crunchy on the outside and airy on the inside. I was definitely more into the inside than outside, but found the pizza quite tasty and gobbled down all six pre-cut squares from my small pizza in one sitting.

My dinner mates choose plain cheese and veggie pizzas. They too enjoyed their entrees, citing the fresh elements of the veggie pizza, including bell peppers, roasted tomatoes, and mushrooms (we asked to hold the broccoli). The Big Cheese pizza blended parmesan and ricotta, plus herbs, with sauce on top. My dinner companions enjoyed the the cheese-infused crunchiness of the edges, and even the touch of carbon flavor. “Fight your friends for the corner pieces,” my wife says.

Pizza options on the menu also include Cacciatore, Buffalo Chicken Deluxe, and more, including make your own.

We started with breadsticks flavored with fresh herbs and a cheese blend, with sauce on the side. At first we weren’t sure when we opened the box if we were looking at the white pizza, but quickly enough it became apparent that these were the sticks and they were more bread-like than stick-like. But flavorful and filling. Between the breadsticks and pizzas, we’ve got leftovers for breakfast or lunch.

We were pretty much stuffed from the pizza and appetizers, so barely made a dent in the huge, round and thick chocolate chip cookies ($4 apiece) that came with the meal. Even our 20-year-old only made it about halfway through his…but he will return to it.

And I imagine we’ll return to Square Mfg. as well.

Owner Kris Gullapalli, who lives nearby, says plans are to open three locations over the next five years. She and her husband and fellow University of Michigan alum Kal Gullapalli have operated a variety of other businesses, from fitness clubs to European waxing spas.

Square Mfg., adds to Natick’s roster of well over a dozen pizza joints.

Hours will be extended to 11am – 9pm as Square Mfg. builds out its team.

We stopped into the The Bagel Table in Natick Center when the doors first opened at a time when they were still working out the kinks. During that maiden visit we were told there would be a 25-minute wait to make the sandwich of our dreams due to a back-up of orders in the kitchen, so we passed on that. But we left The Bagel Table impressed by the crisp interior design of the space and the staff’s obvious commitment to keeping customers and staff safe.

There’s plenty of distance in the large dining space between the four tables that can seat ten. And staff members were certainly on their game with the ingredients information. We keep a nuts-free home, and were assured—accurately—that the cinnamon strudel muffins that caught our interest were made without nuts. They also were sure to inform us that the muffins were made in a facility that was not nuts-free, information that was very appreciated so that we might make our ordering decisions accordingly. We left with a bagful of the not-too-sweet goodies, and every crumb was devoured at home. Fresh bagels are also available (of course), and they were doing a brisk business in custom-roast coffee orders.

We vowed to return as soon as possible and try out the roast turkey sandwich that sounded so good. On our second visit the service was just as friendly, and this time the kitchen hummed with efficiency. In no time we had our roast turkey sandwich, made to order all toasty-warm, with a generous amount of high-quality turkey. A side of potato salad was a welcome addition that made our lunch complete.

Local celebrities also have apparently discovered the place. While picking up my to-go bag, I exchanged greetings with Ben Greenberg, owner of Debsan Decorating Store in Natick Center.

While a two to three thousand dollar license fee cut might not make or break Natick restaurants and clubs, the town’s Select Board voted unanimously to cut liquor license fees in half in an effort to support establishments beleaguered during the COVID-19 pandemic as we head into indoor dining season.

Board member Michael Hickey stated that despite the creativity exhibited by local restaurants in terms of outdoor dining expansions and investments in tents and heat lamps, that he’s very concerned about their outlook: “We’ve got a tough patch ahead.” If nothing else, he said, the fee cuts show “moral support,” and who knows, maybe could help save a part-time job or two.

In slashing liquor license fees, which must be renewed annually, Natick follows in the path of other communities, including Needham, that have also cut fees in half for what are known as S12 establishments, which also includes hotels and venues such as TCAN. The cuts will not extend to businesses such as package stores.

The cuts are estimated to cost the town $65K in revenue, and Natick decided not to raise any other fees in light of the current economy.

The writing wasn’t exactly on the walls, or doors, at Fresh City’s Natick location on Rte. 9 East, but the restaurant sure looked closed.

I wasn’t buying “temporarily,” when I noticed the same sign there over the weekend that I’d seen over the summer. 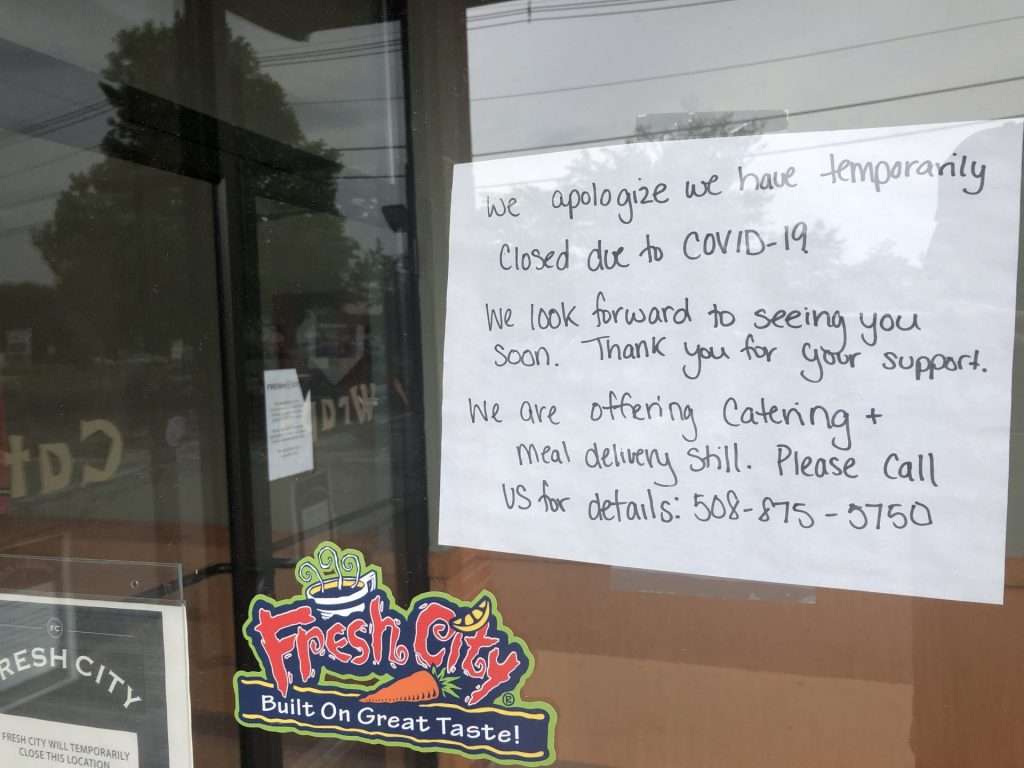 I feel like some sort of meaningful message used to be in the big white space under Fresh City on this sign, too. 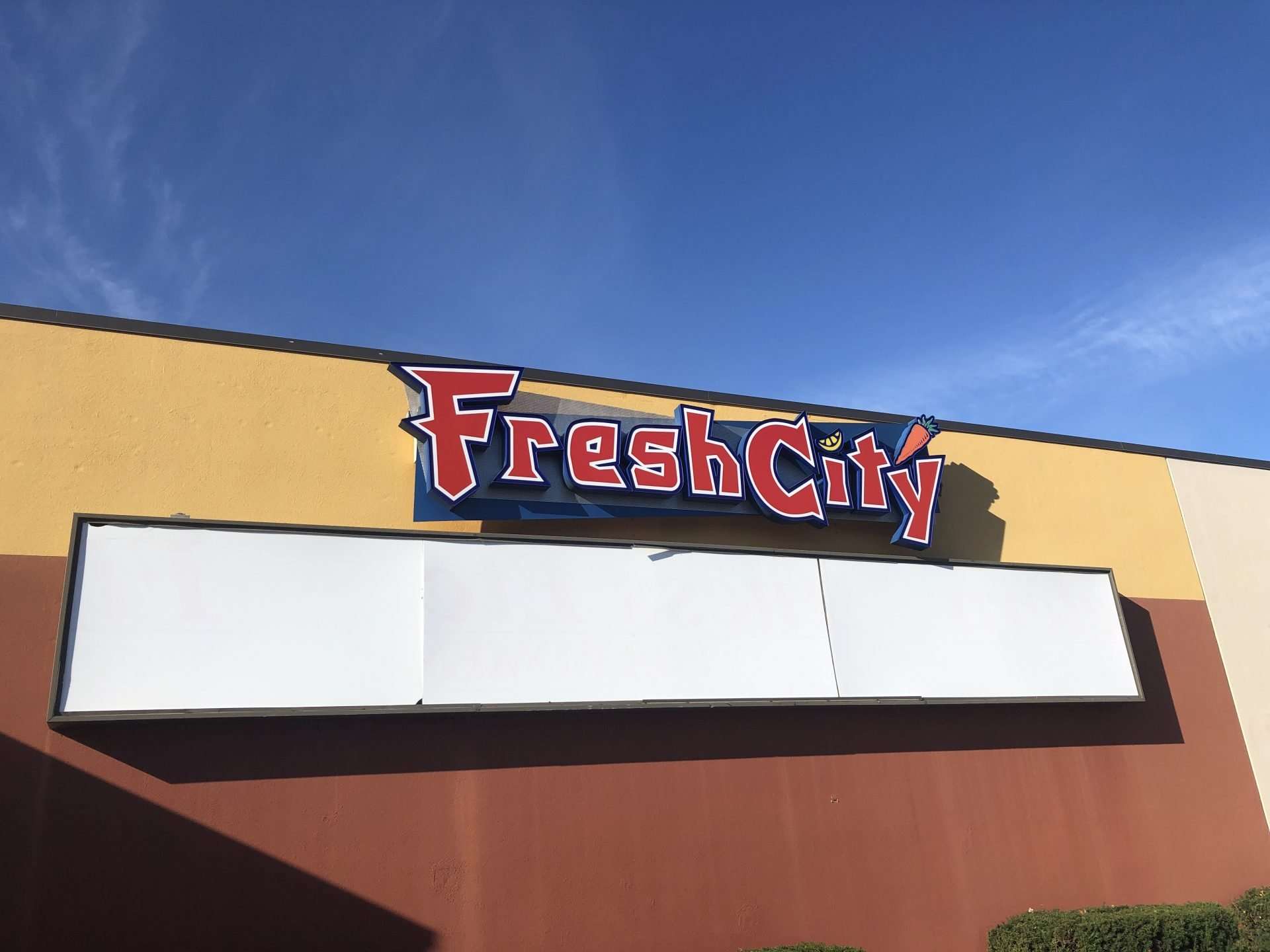 While I’ve been a career brown bagger, when I did venture out for lunch while working for IDG in Framingham, Fresh City was my go-to place. Nice roomy booths, and a varied menu that seemed to satisfy whoever I was meeting. Plus, I played basketball a few times with one of their founders, so felt a sort of “in” there.

But the official word from Fresh City is that this location is permanently, not temporarily, closed now.

We received this message this week from Fresh City via Facebook:

“Unfortunately the Natick restaurant has become a victim of Covid. We couldn’t come to an agreement with the landlord on a rent structure that would allow us to stay open. At the same time we have pivoted our business to refrigerated, heat & eat meals delivered directly to our customers homes. Please check us out at freshcitykitchen.com.”

The Natick Select Board is readying for its annual review of business license fees, which currently include everything from $2 for fortune tellers to several thousand dollars for restaurants and other establishments selling booze. Discussion, originally slated for this week, is now slated for the Select Board’s Nov. 18 meeting.

While this generally might not be the stuff of great public interest, what makes the 2021 license fee review noteworthy is that the town is considering whether to slash fees 25% or 50% in light of the COVID-19 pandemic that has hit restaurants and bars hard.

Natick has taken a broad look at how much other communities charge for fees vs. what Natick charges. It has taken a look at what more than two dozen other communities have done in the way of cutting fees in light of economic realities. Some communities, like Framingham,  have not decreased licensing fees. Others such as Needham have cut fees in half for businesses that sell alcohol for consumption on premises.

Natick has laid out in a spreadsheet (embedded below) what license cuts might look like revenue-wise for the town. If it cut license fees in half for what are known as Section 12 businesses, its revenue would be estimated to fall from about $130K to $65K for the year from this source.

Some might argue that’s a small price to pay to help support local restaurants, especially as we head into the indoor-dining-only season.

The fee review isn’t all about restaurants and bars. Fees for package stores, dealerships, and other businesses are also under review.