In 2010, Natick became a founding member of the state’s Green Communities program focused on using clean and less expensive energy, and as such needs to share an annual report confirming that it’s keeping up this week.

Natick Sustainability Coordinator Jillian Wilson Martin shared the report with the Select Board this week to get its stamp of approval, and among the more interesting sets of data focused on the impact of COVID-19 on the town’s energy use among its municipal and school infrastructure.

The town, which has reaped some $1.7M in grants through its Green Communities participation, has seen energy use decline through various efforts, including LED retrofits and solar panel installations, by 27% since FY08. But as you can see in these charts, electricity use really plummeted since the start of this calendar year, particularly in schools that have been shut down since March. Electricity use has decreased at municipal buildings, too, though most of them have continued to operate with at least skeleton staffs, so the change isn’t nearly as dramatic.

Curiously, natural gas use has not really dropped off, so there’s an opportunity for savings if the town can address this.

“We really have been struggling as a community to manage our heating of our buildings efficiently,” Wilson Martin says. Even when data is normalized for weather conditions, the town’s natural gas use continues to be high. Energy controls operationalization is one key target, and Director of Facilities John Gadson is working on that. But the town is stuck in some situations, such as at Lilja Elementary School, which has a building control system from the mid-1990s that can’t be updated.

“It’s like having a computer from 1996, and so you wouldn’t have that computer anymore, you would have upgraded it by now, but we haven’t made those investments,” Wilson Martin says. Morse Institute Library’s control system is also out-of-date, with eBay among the options for finding parts.

On the bright side, the move from oil to natural gas in many town buildings is credited with much of the town’s energy use reduction over the past decade.

Finally, back to COVID-19, Wilson Martin addressed the issue of gauging the impact of leaving windows open at schools as the weather cools. Natick has reached out to other Green Communities, and energy costs for schools are expected to rise 20% to 25%.

For Natick, that rise would be attributed to heating costs as well as electricity costs for running new air purifiers in all the classrooms. “I don’t think the savings that we had from our energy reduction this past year will make up for the cost of these more intense operations,” Wilson Martin said.

SPONSORED POST: Dedham Country Day believes that balance matters—in learning and life. They combine academic challenge with support and pedagogical tradition with innovation. Strong scholastics together with outstanding arts, athletics and service learning creates a program that is balanced and whole. At DCD, a premium is placed on both academic and emotional intelligence.

Children learn who they are as diverse individuals and how to be part of something bigger. Acceptance is a given, and children find encouragement in every connection they make. It’s a community that nurtures, nudges, and gives. That’s how DCD grows “whole” children—and, ultimately, adults who will thrive with the intellectual and emotional capacity to contribute to their world and enjoy meaningful lives.

While DCD’s campus and classrooms may look a bit different this year, reconfigured to maintain the health and safety of its community, DCD’s ability to deliver an education that is challenging, inclusive, and engaging, reflective of its mission, remains unchanged. From Pre-Kindergarten to Grade 8, DCD students tackle hands-on projects, collaborate, take risks, solve problems and, most of all, engage deeply in their experience.

Explore DCD through a series of virtual admissions events and personal connections with the school’s admissions staff this fall. The first Learning Spotlight for Pre-K and Kindergarten is on October 20. Visit www.dedhamcountryday.org for details and
registration.

Want a Sponsored Post for your business, school, or group? More information here.

The Natick Public School System is asking families to fill out a survey by 10pm on Sunday, Aug. 16 to indicate whether their students plan to start the school year with the hybrid model voted on by the School Committee this week (1 week in school, 1 week remote) or go all-remote via the cringy-named Edgenuity program.

Everything’s subject to change depending on how Natick’s COVID-19 infection numbers go, but for now, the town has a very low rate.

Special education students will have in-person school throughout, and additional communications is being shared with families by the school system.

Thanks to Don Warren for sharing photos of recent Natick High School grads, who just can’t seem to take off those Class of 2020 graduation gowns. Seen here, a handful of grads hoop it up at Murphy Field on Monday, Aug. 10, 3 days after they graduated at Memorial Field.

While they’re too far away to see in detail, we’ll assume they were masked up.

Natick High School’s Class of 2020 patiently waited a couple of months, but finally got its graduation ceremony, which lasted from light until dark on a beautiful August night. Congratulations to the grads, and best of luck going forward.

We’ll add the Natick Pegasus recording of the event when it’s available. 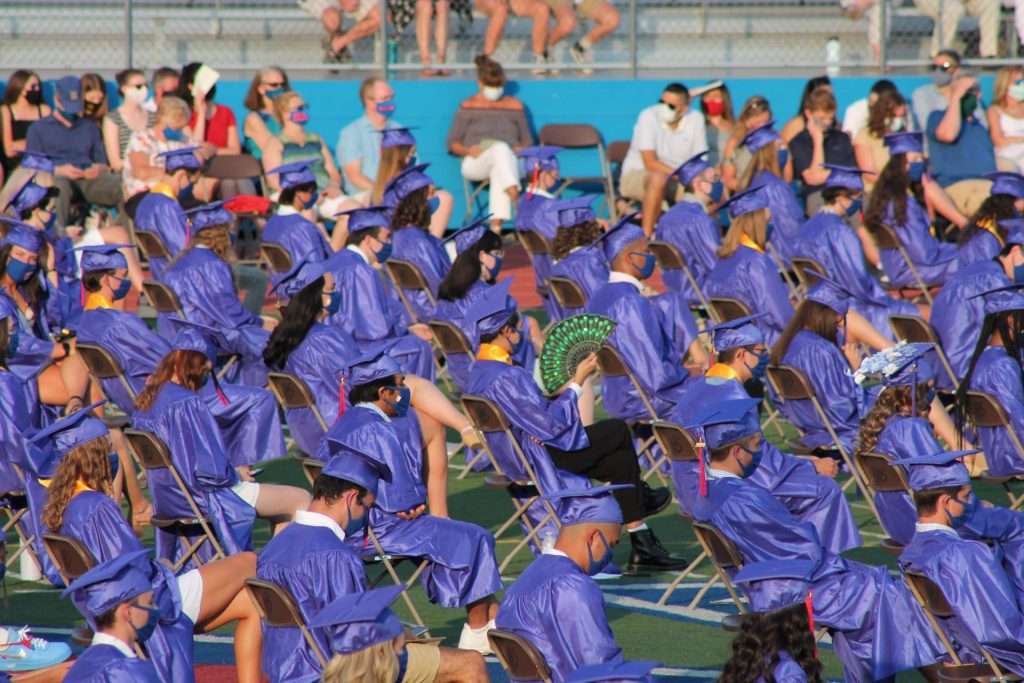 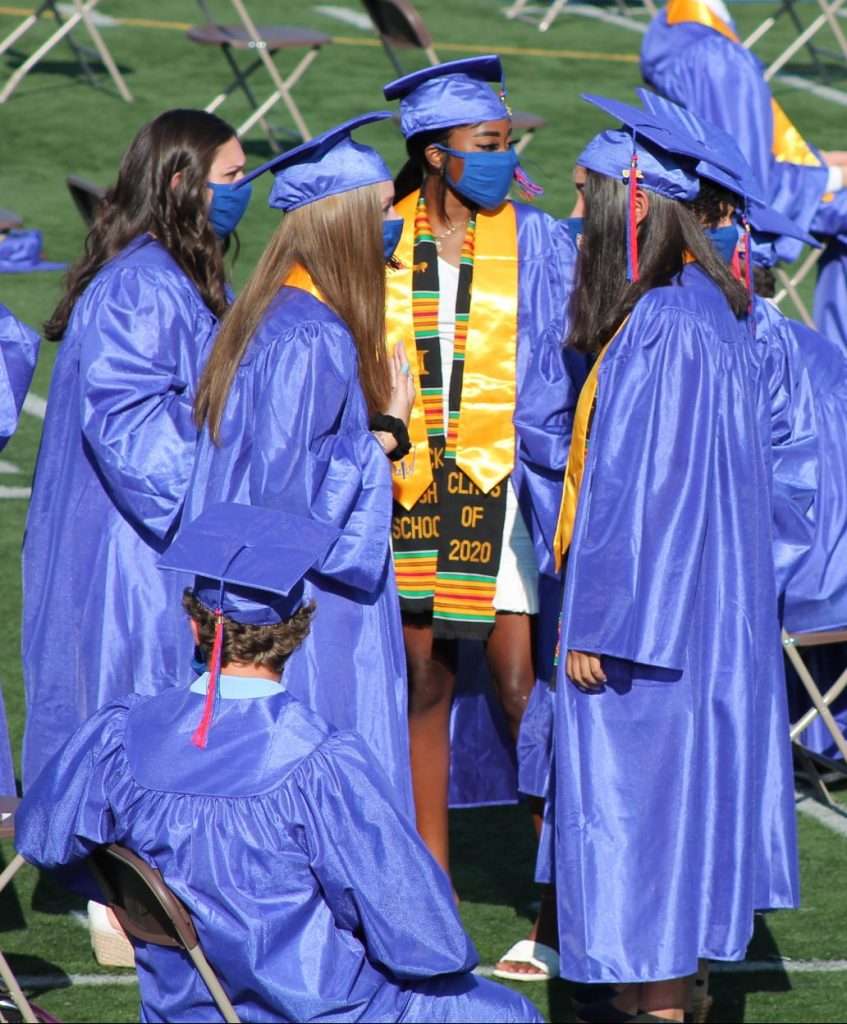 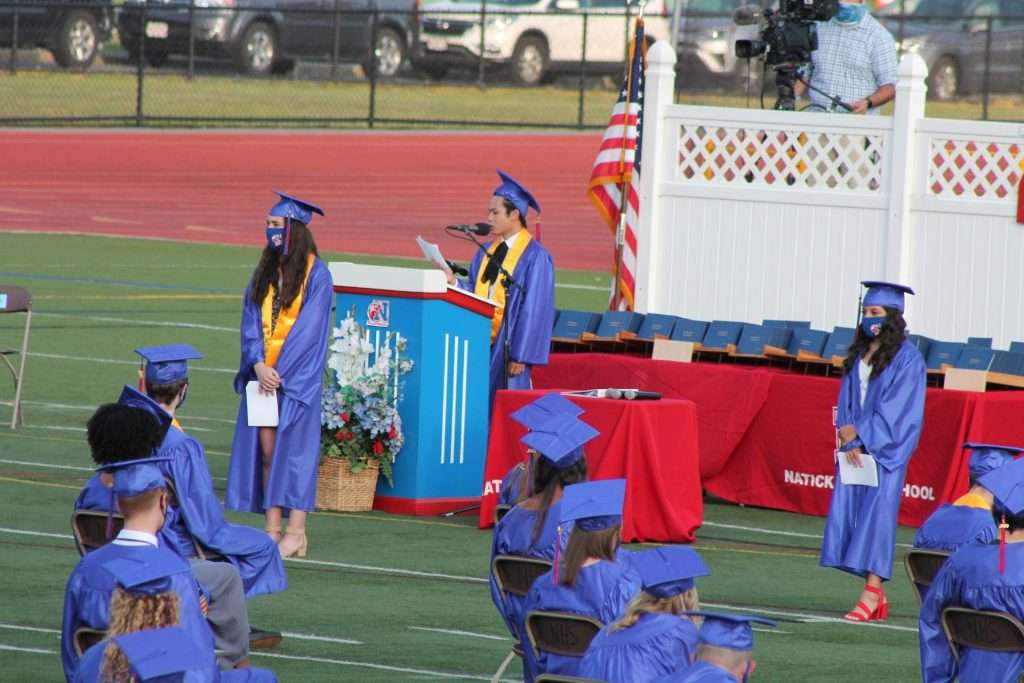 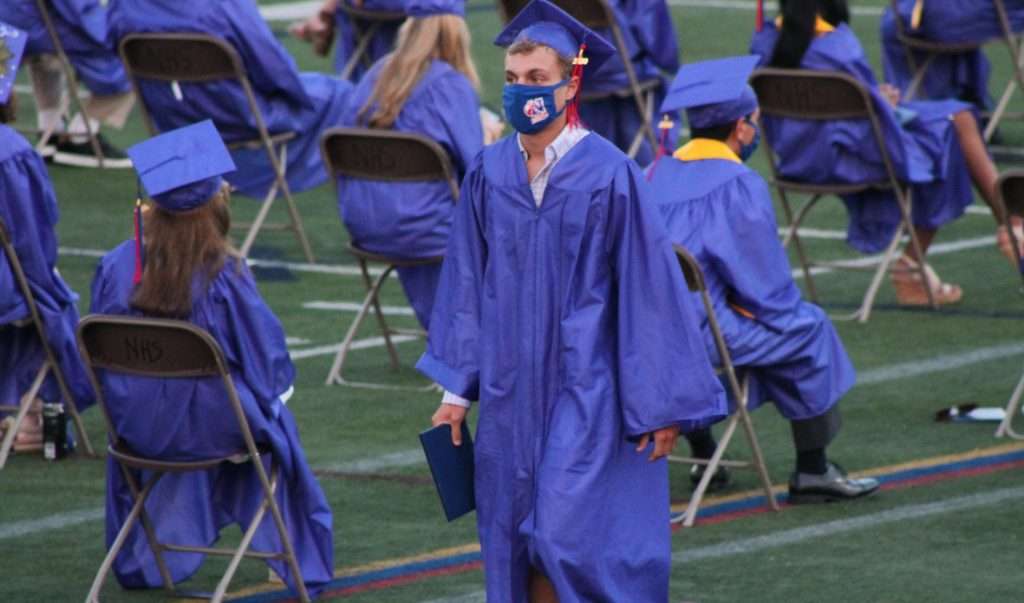 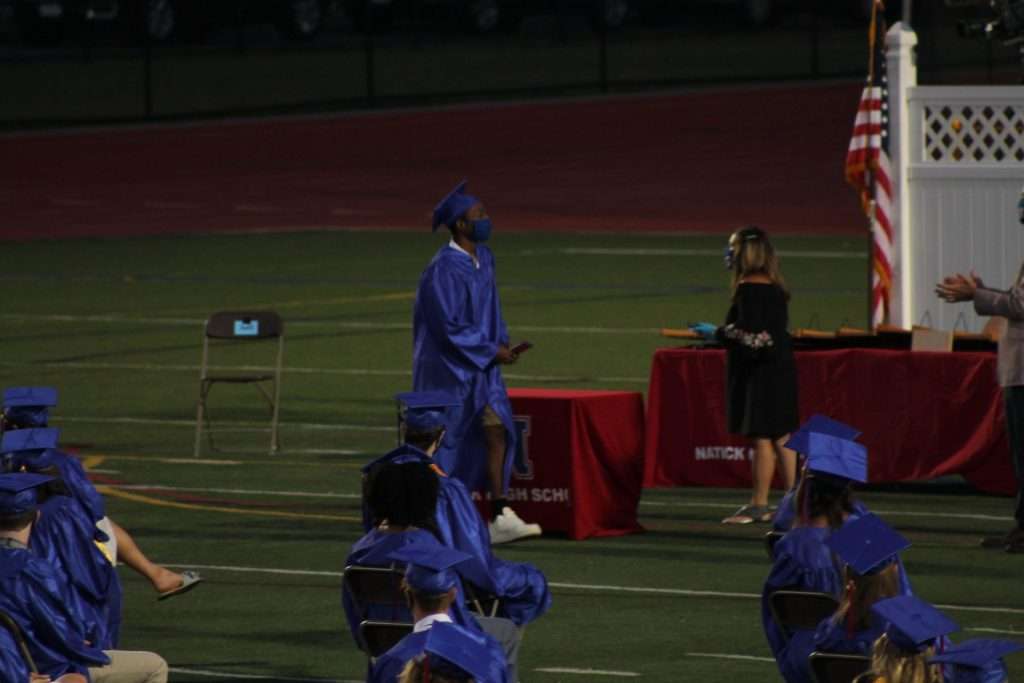 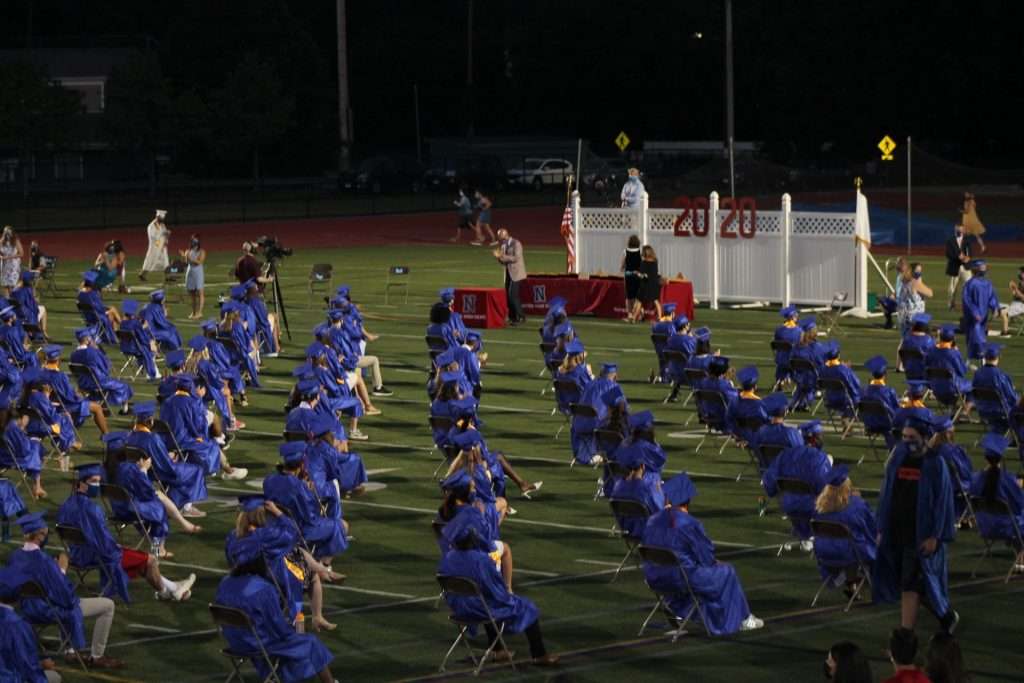