The beavers that live alongside the Hunnewell Town Forest trail off of Oak Street in Natick haven’t been backing down from the challenges of those breaching their dam over the past month in Little Jennings Pond.

As the town’s Conservation Commission indicated at its Aug. 11 meeting, the Natick Public Works Department was authorized to “punch a hole in the dam” in September, and it did.

But the beavers came right back and plugged the gap, keeping a section of the blue trail in the Town Forest off limits to people.

Since then, at least a couple more breaches have been executed, one that was erased rather quickly, and now a more ambitious one of which a Natick Report reader has shared photos and a video.

Here’s what the dam looked like when I stopped by on Monday morning: 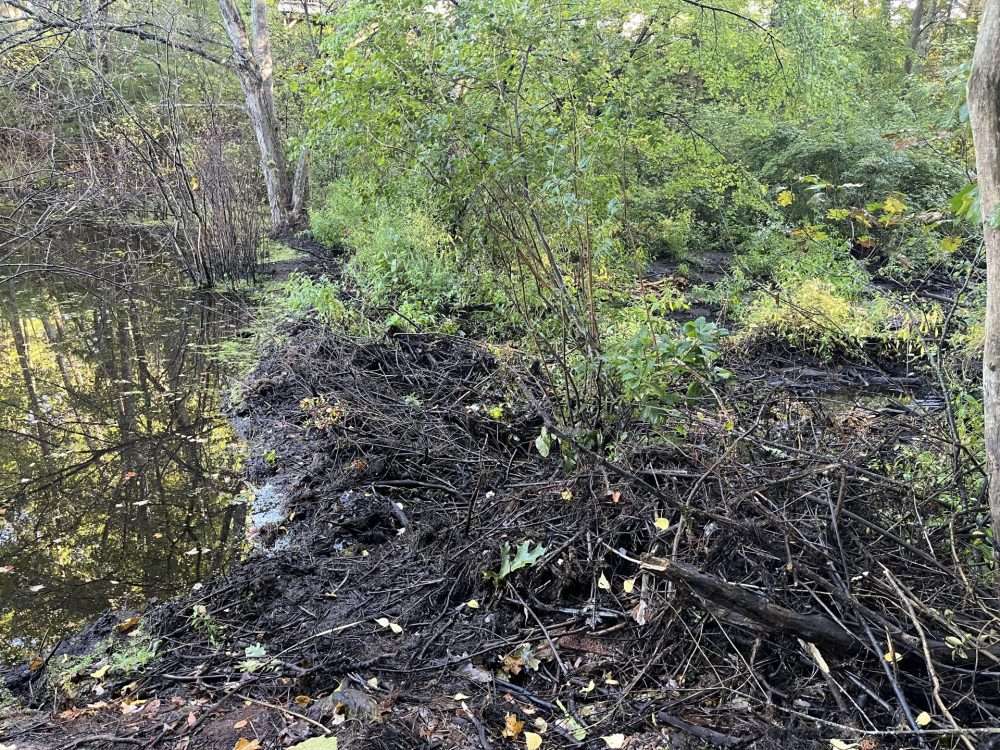 Claire Rundelli, planner conservation agent for the town, said that after the Public Works breach earlier this month there weren’t any additional approvals for breaches. When asked about the beavers during the Sept. 15 Conservation Commission, she said “we’ve heard nothing from the beavers in recent days.”

The Commission held a town-wide beaver discussion in March in conjunction with the Trails and Forest Stewardship Committee, and Open Space Advisory Committee, and it ended with consensus to adapt to the beavers rather than trap them. The thinking was that other beavers would just come back to the area and rebuild the dam.

Natick has rerouted an oft-flooded trail at the Town Forest to avoid the beaver dam’s impact. Flow devices used to address beaver issues in other parts of Natick’s complex and large watershed were deemed unlikely to work in the relatively shallow water along the Town Forest trail.

Natick, which put restrictions in place on non-essential outdoor water use during mid-summer in light of the drought, plans to discuss a lift of that ban on Wednesday at the Select Board meeting.

Thinking we might need to put up a “Town water in use” sign in our yard (not that we water the lawn anyway).

The Greater Boston Food Bank has awarded MathWorks of Natick with its Founder’s Award for contributions to the Growing Healthy Futures campaign that supports summer hunger-relief efforts. The mathematical computing software maker’s generosity has resulted in millions of meals for families in need.

MathWorks matched up to $1 million in donations in 2021 and 2022 in support of the campaign. This was crucial during the pandemic, according to Food Bank CEO Catherine D’Amato.

Natick’s PacDNA, whose “oligonucleotide therapeutics” technology is designed to help treat diseases such as cancer in hard to reach organs and tissues, is 1 of just 6 companies chosen to take part in the Massachusetts Biotechnology Council’s Fall accelerator program. The company’s technology aims to make treatment more effective and affordable.

A networking event will be held on Oct. 26 at the MassBioHub in Cambridge that will include a chance to meet the startups. The participating companies during an 8-week program involving MassBio’s life sciences network will bolster their business plans and get introduced to potential partners, among other things.

A community networking event will be held on October 26 at the MassBioHub in Cambridge that will feature an opportunity to meet the startups participating in MassBioDrive‘s fall cohort and connect with MassBio’s innovation ecosystem. Refreshments will be served.

The Natick Select Board at its meeting on Wednesday, Sept. 28 is slated to provide an update on the topic of cannabis host community agreements as they relate to state legislative changes.

Select Board Member Michael Hickey raised the issue at a recent meeting at which Natick hit pause on negotiations with a couple of cannabis delivery outfits (See our Sept. 6 Business Buzz for more background).

Spirits were high at the Natick Community Organic Farm Harvest Dinner fundraiser, the first large-scale in-person event at NCOF in three years. The evening was a chance for the community to join together for a fabulous, locally sourced meal prepared by chef Dave Becker’s team from Sweet Basil in Needham and Juniper in Wellesley.

After the auction portion of the evening was complete, the food took center stage. Diners were treated to hand-pulled mozzarella creamy polenta, home-made apple crumble, and more, all served outdoors under twinkle lights. Beer from Exhibit A in Framingham flowed, and Bully Boy Booze provided hand-crafted cocktails.

The farm thanks all of the teens and volunteers who gave their time and energy helping make the Harvest Dinner look effortless, and for transforming the farm into the most incredible backdrop.

The Natick Cultural Council is accepting grant applications until Oct. 17 from those who have great ideas for arts, humanities or science projects that would benefit the Natick community.

The Council has more than $14K to divvy up for projects in fiscal year 2023.

Last year’s grants ranged from $200 to $1,000, and included programs such as hip hop dance chair exercise for seniors, know Natick history, and juggling.

Ask questions of the Council at natickculturalcouncil@gmail.com

We once scored a Wellesley Cultural Council grant for a project called Wellesley Dump Art.