The Massachusetts Bureau of Geographic Information (MassGIS) has released a tool dubbed Massachusetts Before & After that lets you view from above how the landscape looked in the 1990s vs. in 2019.

Check out locations in Natick to view dramatic before-and-after scenarios based on aerial photography that is geographically referenced to the town (orthophotography).

I found it easiest to orient myself by typing Natick Common into the search bar. That part of town is easily recognized with its grass and gazebo, and I found it pretty easy to navigate from there. You can see the stark difference, for example, on the South Main Street stretch across from the Common where the condos now stand. The online tool features a slider that lets you roll over the before or after images to see what was there after or before.

A new website called Natick.Business has launched through a joint effort by Natick merchants through the Natick Center Cultural District and Natick Center Associates, and Natick’s Community & Economic Development Department.

The site, which is still being fleshed out, features information from Natick and the Commonwealth that’s helpful to businesses looking to reopen safely, and provides resources, such as access to free signage covered by the town. Volunteers in specific industry sectors will help businesses get up to speed on best practices for reopening, too.

Five Crows, the gallery and handcrafted gifts shop at 41 Main St., in Natick Center, will be back in action as of this Thursday, June 18. Just in time for this weekend’s Father’s Day.

You’ll need to wear a mask (spares available) and must use hand sanitizer upon entering. Gloves will be available, too. The store will be limited to 7 customers at a time, contact-free transactions will be offered, as will gift wrap. No cash transactions. 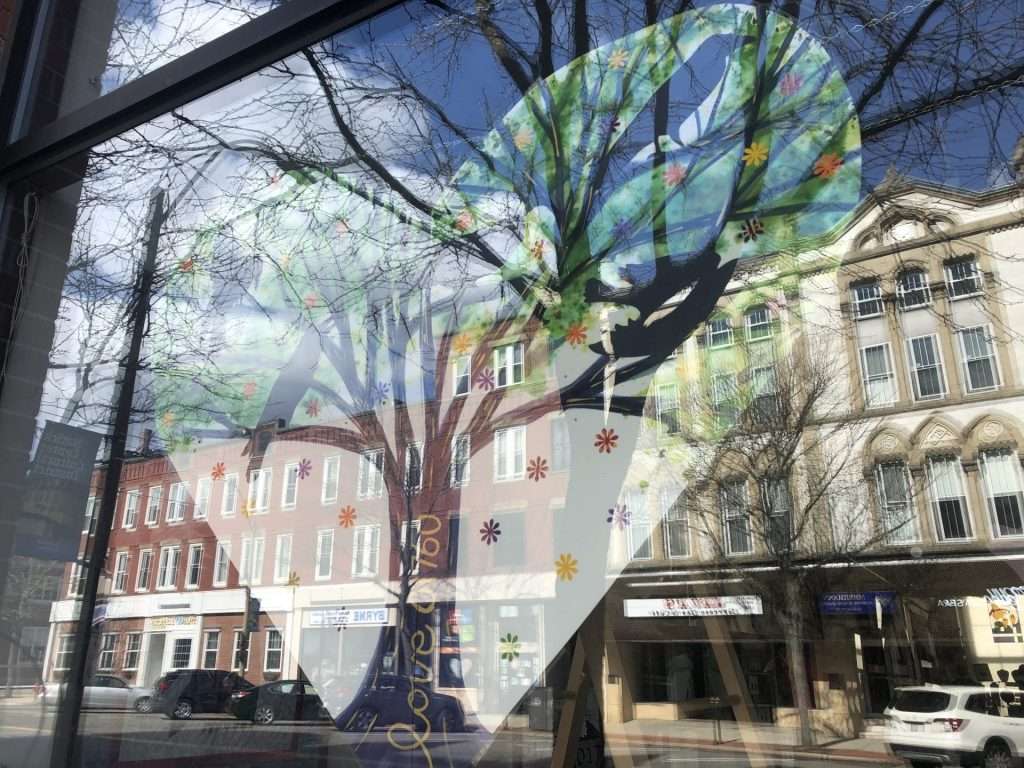 Uni-T, which describes itself as a combined art gallery, T-shirt and gift shop, has closed the Natick shop it started in 2012 and is planning to open soon on Court Street in Natick Center. Multitalented owner Eujin Kim Neilan features her own illustrated children’s books, hand-printed T-shirts and other creations, plus those of other local artists. Dance, music and book readings are among the sorts of events Uni-T has held in the past.

Workers set up the outdoor dining area in the parking lot outside Eli’s & Dolphin Seafood in Natick Center on Tuesday morning to get ready for serving meals and drinks later on Tuesday. 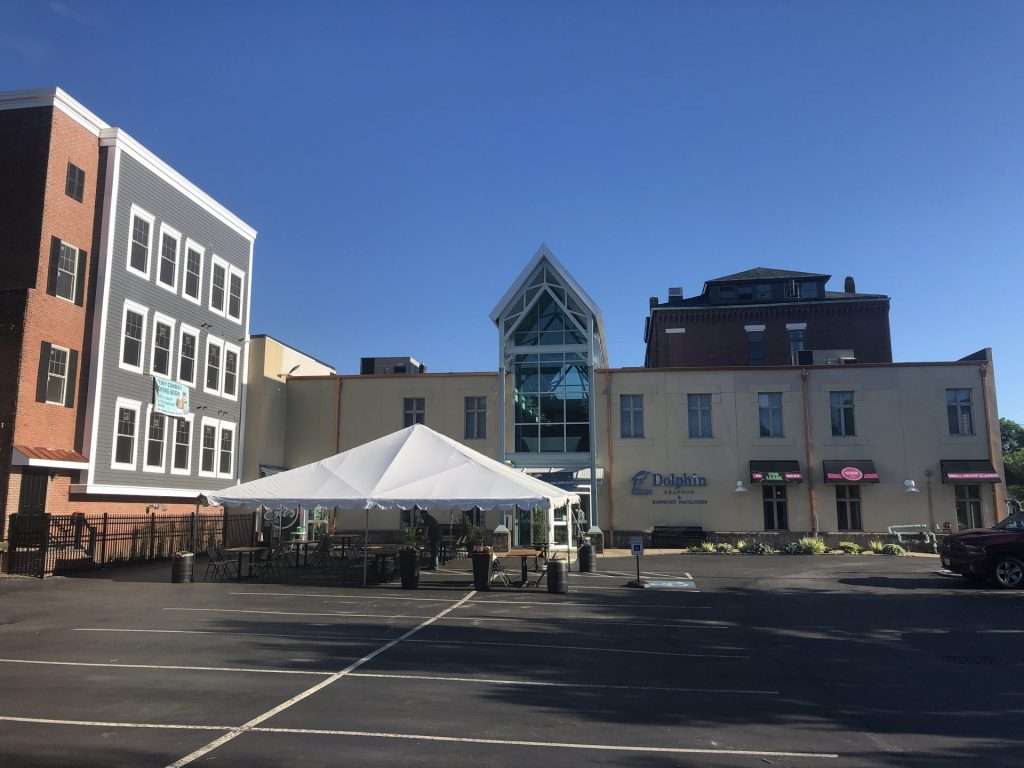 The Dolphin starts serving today from 4-8pm. Call for reservations. Masks must be worn to enter. Curbside and take-out service continue.

The town is working with restaurants to allow them to serve outdoors even if they previously have not been licensed to do so given that there’s no indoor sit-down dining for now under state rules due to the COVID-19 pandemic. 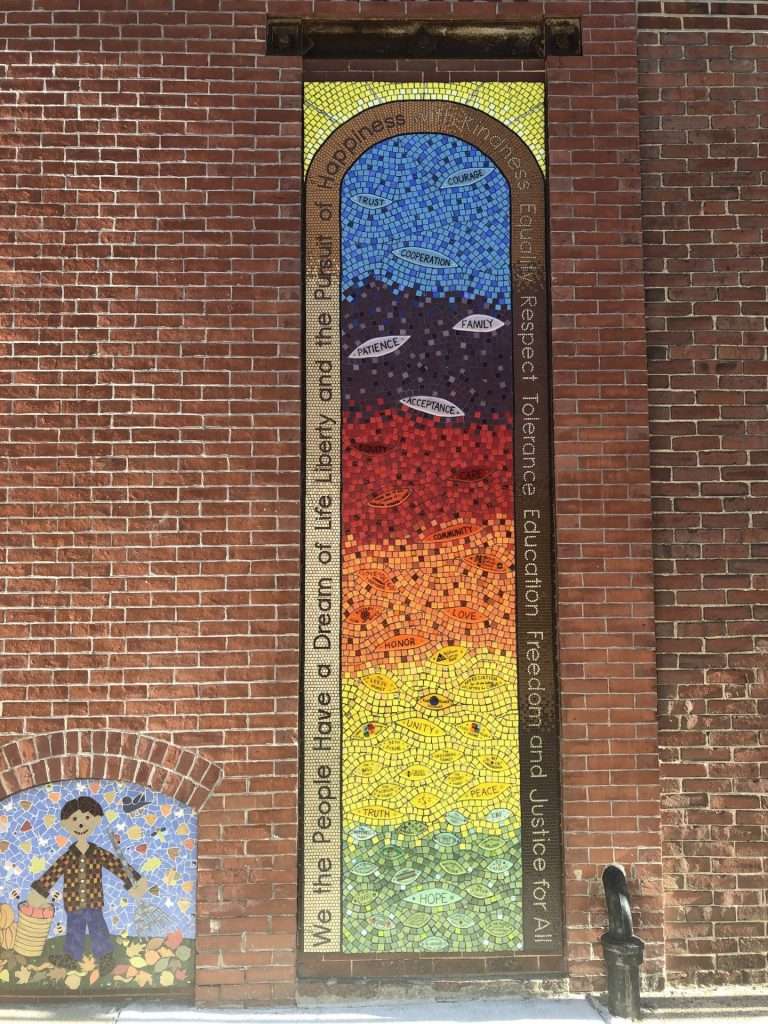 From the Department of Justice’s U.S. Attorney’s Office for Massachusetts:

Six former employees of eBay, Inc. have been charged with leading a cyberstalking campaign targeting the editor and publisher of a newsletter that eBay executives viewed as critical of the company. The alleged harassment included sending the couple anonymous, threatening messages, disturbing deliveries – including a box of live cockroaches, a funeral wreath and a bloody pig mask – and conducting covert surveillance of the victims.

James Baugh, 45, of San Jose, Calif., eBay’s former Senior Director of Safety & Security, was arrested today and charged by criminal complaint with conspiracy to commit cyberstalking and conspiracy to tamper with witnesses.

David Harville, 48, of New York City, eBay’s former Director of Global Resiliency, was arrested this morning in New York City on the same charges and will make an initial appearance via videoconference in U.S. District Court in the Southern District of New York.

In addition the following defendants were charged in an Information unsealed today: Stephanie Popp, 32, of San Jose, eBay’s former Senior Manager of Global Intelligence; Stephanie Stockwell, 26, of Redwood City, Calif., the former manager of eBay’s Global Intelligence Center (GIC); Veronica Zea, 26, of San Jose, a former eBay contractor who worked as an intelligence analyst in the GIC; and Brian Gilbert, 51, of San Jose, a former Senior Manager of Special Operations for eBay’s Global Security Team. They are each charged with  conspiracy to commit cyberstalking and conspiracy to tamper with witnesses and will make appearances in federal court in Boston at a later date.

According to the charging documents, the victims of the cyberstalking campaign were a Natick couple who are the editor and publisher of an online newsletter that covers ecommerce companies, including eBay, a multinational ecommerce business that offers platforms for consumer-to-consumer and business-to-consumer transactions. Members of the executive leadership team at eBay followed the newsletter’s posts, often taking issue with its content and the anonymous comments underneath the editor’s stories.

It is alleged that in August 2019, after the newsletter published an article about litigation involving eBay, two members of eBay’s executive leadership team sent or forwarded text messages suggesting that it was time to “take down” the newsletter’s editor.

In response, Baugh, Harville, Popp, Gilbert, Zea, Stockwell, and others allegedly executed a three-part harassment campaign. Among other things, several of the defendants ordered anonymous and disturbing deliveries to the victims’ home, including a preserved fetal pig, a bloody pig Halloween mask, a funeral wreath, a book on surviving the loss of a spouse, and pornography – the last of these addressed to the newsletter’s publisher but sent to his neighbors’ homes.

As part of the second phase of the campaign, some of the defendants allegedly sent private Twitter messages and public tweets criticizing the newsletter’s content and threatening to visit the victims in Natick. The documents allege that Baugh, Gilbert, Popp and another eBay security employee planned these messages to become increasingly disturbing, culminating with “doxing” the victims (i.e., publishing their home address). It is alleged that the very same group intended then to have Gilbert, a former Santa Clara police captain, approach the victims with an offer to help stop the harassment that the defendants were secretly causing, in an effort to promote good will towards eBay, generate more favorable coverage in the newsletter, and identify the individuals behind the anonymous comments.

The third phase of the campaign allegedly involved covertly surveilling the victims in their home and community. According to the complaint, Harville and Zea registered for a software development conference to explain their trip to Boston on Aug. 15, 2019. Baugh, Harville, and Zea (and later Popp) allegedly drove to the victims’ home in Natick several times, with Harville and Baugh intending at one point to break into the victims’ garage and install a GPS tracking device on their car. As protection in the event they were stopped by local police, Baugh and Harville allegedly carried false documents purporting to show that they were investigating the victims as “Persons of Interest” who had threatened eBay executives. The victims spotted the surveillance, however, and notified the Natick police, who began to investigate. The police learned that Zea had rented one of the cars used by the defendants and reached out to eBay for assistance.

Aware that the police were investigating, the defendants allegedly sought to interfere with the investigation by lying to the police about eBay’s involvement while pretending to offer the company’s assistance with the harassment, as well as by lying to eBay’s lawyers about their involvement. At one point, for example, Baugh, Gilbert, Popp, and Stockwell allegedly plotted to fabricate another eBay “Person of Interest” document that could be offered to the police as a lead on some of the harassing deliveries. As the police and eBay’s lawyers continued to investigate, the defendants allegedly deleted digital evidence that showed their involvement, further obstructing what had by then become a federal investigation.

The charges of conspiracy to commit cyberstalking and conspiracy to tamper with witnesses each carry a sentence of up to five years in prison, three years of supervised release, a fine of up to $250,000 and restitution. Sentences are imposed by a federal district court judge based upon the U.S. Sentencing Guidelines and other statutory factors.

The details contained in charging documents are allegations. The defendants are presumed innocent unless and until proven guilty beyond a reasonable doubt in a court of law.

[Natick Report Note: The Natick couple is not identified in the official release, and we’ll refrain from identifying them unless they identify themselves in light of this indictment.]

Universal Hub has the gory details in the affidavit.

As alleged, the extensive harassment campaign launched by these six @eBayemployees included sending embarrassing & disturbing deliveries to the Natick couple's home, including a bloody pig mask, sympathy wreath, a book on how to survive the loss of a spouse, & live insects. pic.twitter.com/U2d1fgsLJD

eBay’s statement on the regarding the indictments:

eBay Inc. (NASDAQ: EBAY) today commented on indictments separately announced by the U.S. Attorney’s Office in Massachusetts against several former eBay employees. Neither the Company nor any current eBay employee was indicted. In order to preserve the integrity of the government’s investigation, eBay did not previously communicate about this matter. In light of today’s public announcement by the government, eBay is now addressing this matter publicly.

eBay was notified by law enforcement in August 2019 of suspicious actions by its security personnel toward a blogger, who writes about the Company, and her husband. eBay immediately launched a comprehensive investigation, which was conducted with the assistance of outside legal counsel, Morgan, Lewis & Bockius LLP. As a result of the investigation, eBay terminated all involved employees, including the Company’s former Chief Communications Officer, in September 2019.

The independent special committee formed by eBay’s Board of Directors to oversee the Company’s investigation into this matter said, “eBay took these allegations very seriously from the outset. Upon learning of them, eBay moved quickly to investigate thoroughly and take appropriate action. The Company cooperated fully and extensively with law enforcement authorities throughout the process. eBay does not tolerate this kind of behavior. eBay apologizes to the affected individuals and is sorry that they were subjected to this. eBay holds its employees to high standards of conduct and ethics and will continue to take appropriate action to ensure these standards are followed.”

The Company noted that the internal investigation also examined what role, if any, the Company’s CEO at the time of the incident, Devin Wenig, may have had in this matter. The internal investigation found that, while Mr. Wenig’s communications were inappropriate, there was no evidence that he knew in advance about or authorized the actions that were later directed toward the blogger and her husband. However, as the Company previously announced, there were a number of considerations leading to his departure from the Company.