If you have a Natick High School Class of 2020 graduate under your roof then you should be now have a good sense of what to expect at the ceremony, slated for 6pm this Thursday, Aug. 6 at Memorial Field.

For the rest of us who might be curious or can’t attend for one reason or another, here’s a rundown of what’s planned for the 400-plus graduates (not all of whom will attend). Note that the ceremony will be livestreamed by Natick Pegasus.

(Feel free to share photos with us here if you do attend: natickreport@gmail.com) 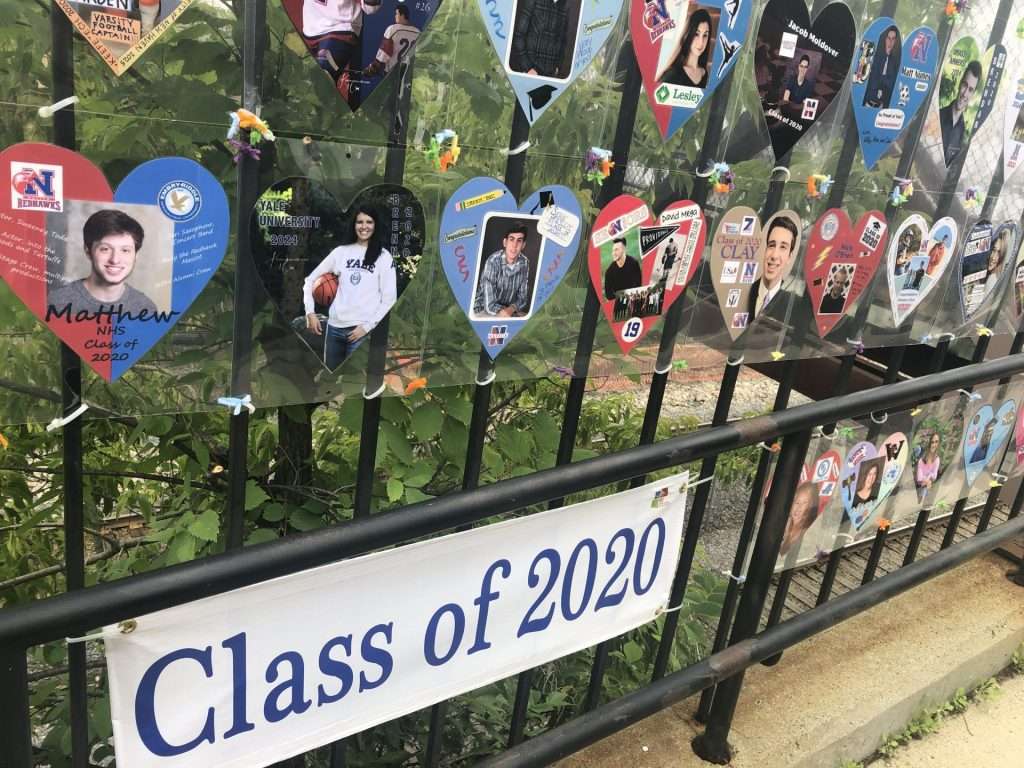 NHS Vice Principal Zach Galvin outlined during this week’s School Committee meeting (about 5 minutes into the recording) this year’s vetted and re-vetted plan, all in compliance with state protocols related to the COVID-19 pandemic. While the ceremony might appear to be coming from a Place of No (no students marching in, no choir, no band, no handshakes…and no pre-graduation senior picnic), the administration has plotted out an event in close coordination with the town’s health department it hopes will still be enjoyable, and no doubt unforgettable.

From a high level, Galvin says the first thing that became obvious in making this plan was that he was going to need to use more field space than usual in light of 6-foot social distancing rules. “I found that that worked well if I spun what we normally do 90 degrees,” he said. Between 1,500-1,600 people are expected to attend the event.

Where things get dicey is requiring that only up to 4 guests per student, all living in the same household, be allowed in guest seating. So grandparents who don’t live in the same house will be left out. And no swapping of space allowed between those with smaller or larger families. No seat holding games either, as seating will be pre-assigned, and that will be key to an orderly in and out (“People want the best seats…I don’t know where they think the best seats are,” Galvin says.)

Galvin had thought about trying to pull this off without rehearsal, but nah, that wasn’t to work. One important piece of rehearsal will be showing students where their families will sit, and that should help families get into their seats in an orderly fashion.

The graduation ceremony plan has had to be adaptable given changing COVID-19 data and the introduction of new twists, such as the Massachusetts Travel Order. Supt. Anna Nolin pointed out that in keeping with the Travel Order, students or families traveling back from hotspot locations have been reached out to and will not be allowed to take part. That’s resulted in “some tough conversations,” she said.

School Committee member Donna McKenzie raised a concern about what the town is doing to discourage kids from partying irresponsibly after the ceremony in light of there not being the usual all-night party used to discourage bad behavior. She doesn’t want to see Natick wind up, like Chelmsford, making headlines as a post-graduation ceremony COVID-19 hotspot.

Students and parents will be reminded of expectations, school officials said. Galvin said he was heartened to learn that students were up on the Travel Order and had changed travel plans to abide by those safety rules, so he took that as a sign students and families are taking a responsible approach to the graduation festivities overall.

Students back in May, when they would have graduated, were feted in a car parade that streamed through town.