Natick has declared a snow emergency this weekend that includes a parking ban on all roads in town beginning at 10pm on Friday, Jan. 28 until noon on Sunday, Jan. 30. 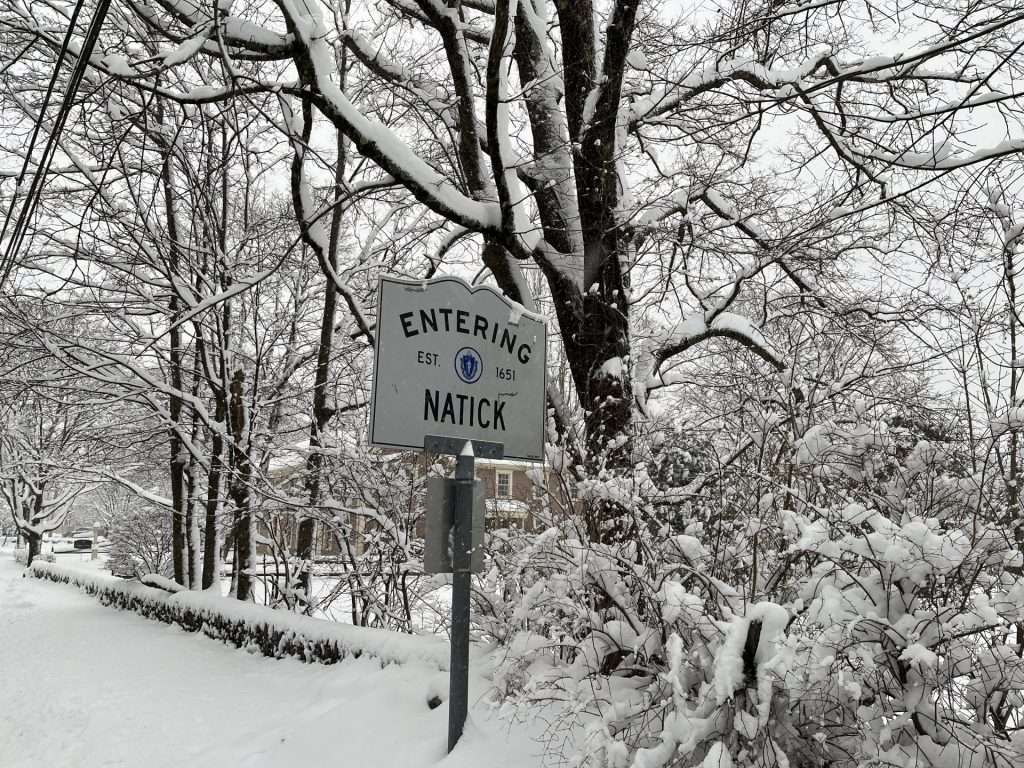 The town warns that any vehicle parked on any roadway after 10pm will be towed. Parking will be allowed in the town municipal lot between Pond and West Central Streets.

More: Where to sled in Natick

Zero Empty Spaces, an outfit launched in 2019 to give artists access to high profile but inexpensive studio space, plans to open its first location outside of Florida next month at Natick Mall.

An open house for the space, located next to Louis Vuitton on the first floor of the mall, is slated for Saturday, Feb. 12 from 2-3pm. Zero Empty Spaces Co-Founders Evan Snow & Andrew Martineau—part of a team of arts advocates and entrepreneurs with expertise spanning advertising/marketing, real estate and retail—plan to be on hand to preview the space and discuss the opportunity for artists. Those interested in the studios can apply.

The spaces at this location will go for $4.50 sq. ft., including water and electricity, on a month-to-month basis (average space is 120 sq. ft., so $575 per month with tax). Up to 12 studios will fit into the former Burberry store space.

Martineau says his team “formed a great relationship with the team from [Natick Mall property manager] Brookfield that has been an advocate for artists and Zero Empty Spaces for a couple years now. They presented the Natick Mall opportunity to us and after visiting Natick Mall and the neighboring communities we were encouraged by the number of artists we met and the incredible energy and enthusiasm they bring to their practice. Plus, we will be able to give the artists the opportunity to have a working artist studio next to Louis Vuitton!”

Artists at those locations range from painters to sculptors to illustrators. 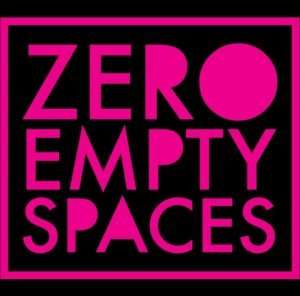 Such a space for artists at Natick Mall would expand the profile of artists further across Natick, which already has a bustling arts scene downtown in and around Art Alley, at TCAN, and perhaps soon, at the pop-up center in the works at 1 South Main St.

Zero Empty Spaces has a lease for six months at the Mall, for starters. If the Mall gets a higher paying tenant, the artist studios could have to move, but Martineau says nearly all the time that property managers wind up offering another space at the location to keep things going.

Self-storage gets so dramatic

Efforts to open the Cypress Tree recreational marijuana shop at Cloverleaf Mall on Speen Street have been in limbo while the property owner has sought Natick Planning Board’s approval for a special permit amendment that would allow an adjacent self-storage facility to open in the former fitness business space.

During a sometimes contentious Jan. 5 Planning Board meeting (56 minutes into the Natick Pegasus recording), the Board voted 3-2 vote in favor of the amendment, but that wasn’t enough votes for approval.

Project developer Joshua Katzen called out members of the board during the meeting for overreaching due to their dislike of using the space for self-storage, seen as a less-than-engaging use of the property that sits alongside retailers such as the Aldi grocery store, Guitar Center, and Total Wine & More. Board Chair Julian Munnich called the proposed use “not what the zoning has envisioned,” and board member Terry Evans explained her reservations about allowing a change in use in light of the board’s  “responsibility to some of the most valuable real estate we have in Natick.”

Katzen referred to his application as being “a very, very minor site plan modification” that involved changing some parking and in the end adding landscaping in response to board concerns.

“I must say I find it outrageous that you would take this opportunity to try to control a dually authorized use by another town board [Zoning Board of Appeals] when your only authority and your only competence is to decide if the site plan works…” Katzen said.

Board member Andy Meyer who voted in favor of the motion, expressed his frustration over the entire process, at one point saying he was getting “kind of sick to my stomach” that the proposal might get thrown out over use issues. Self-storage might actually be beneficial to people moving and and out of Natick, said Meyer, who touted Katzen as a developer and taxpayer with a strong track record in town who deserved better.

The Planning Board picked up the issue at its Jan. 19 meeting (26 minutes into the Natick Pegasus recording), where it was expected to craft its decision based on the results of the previous hearing on the matter. But Amanda Loomis, director of community & economic development, revealed that the applicant “at a late hour” had made a request to “withdraw the application without prejudice.”

Without the applicant in attendance, discussion then ensued about what the intention of the withdrawal might have been. It was was pointed out that were the board to confirm its decision from the previous week that the applicant couldn’t return with the project for two years.

The board wound up continuing the hearing to its Feb. 2 meeting, where the applicant will have a chance to explain the purpose and intent of its proposed withdrawal (in writing or in person). A motion to reconsider the original vote could take place.

Stonegate Group’s vision for redeveloping the building at 21 Summer St. in downtown Natick that formerly housed The Kells brewery (across from TCAN  has started to take shape. There’s no indication yet whether anything as fun as The Kells might occupy the space, but plans are to have 5,000 sq. ft. of retail on the bottom floor. Parking will be below, and 1 and 2 bedroom apartments will be contained in three stories above.

The MetroWest Daily News reported on the recent joint meeting of the Natick Historical Commission and Design Review Board that discussed the proposal.

Stationery-plus shop Calliope, squeezed into 250 sq. ft. for the past 5 years at 1 North Main St., is plotting its big move in March to a space at 29 Main St. that’s almost five times the size.

In order to make the move, Calliope is seeking financial support in the form of a Kickstarter crowdfunding campaign. Owner Kristina Burkey originally aimed to raise $20K, and supporters helped her blow through that…so now she’s shooting for $40K or $50K. Why not?

“With $40 or even $50k of power behind me I can confidently STOCK. MY. STORE. and therefore always have what you want,” she posted on social media.

Natick’s Charles River Dam Advisory Committee will be meeting next online on Tuesday, Jan. 25, from 4-6:30pm via Zoom.

The agenda will focus on recreation opportunities and features that would be desirable at the current dam site. Discussion will also include key questions, including alternative repair methodologies.

Any member of the public who wishes to submit written comments to the Advisory Committee may submit those via mosthues@cbi.org by 10am on Jan. 25. There will also be a brief public comment period during the meeting.

The 1934 dam has received a series of less-than-stellar inspection grades in recent years and the town has finally decided it better do something about this since it owns the dam. As a high hazard structure that impounds about 160 million gallons of water, the dam would do some real damage to its surroundings if it fails. Town Meeting in 2019 approved $1.25M in funds to fix the dam, but since then the prospect of just getting rid of it has been been entertained. 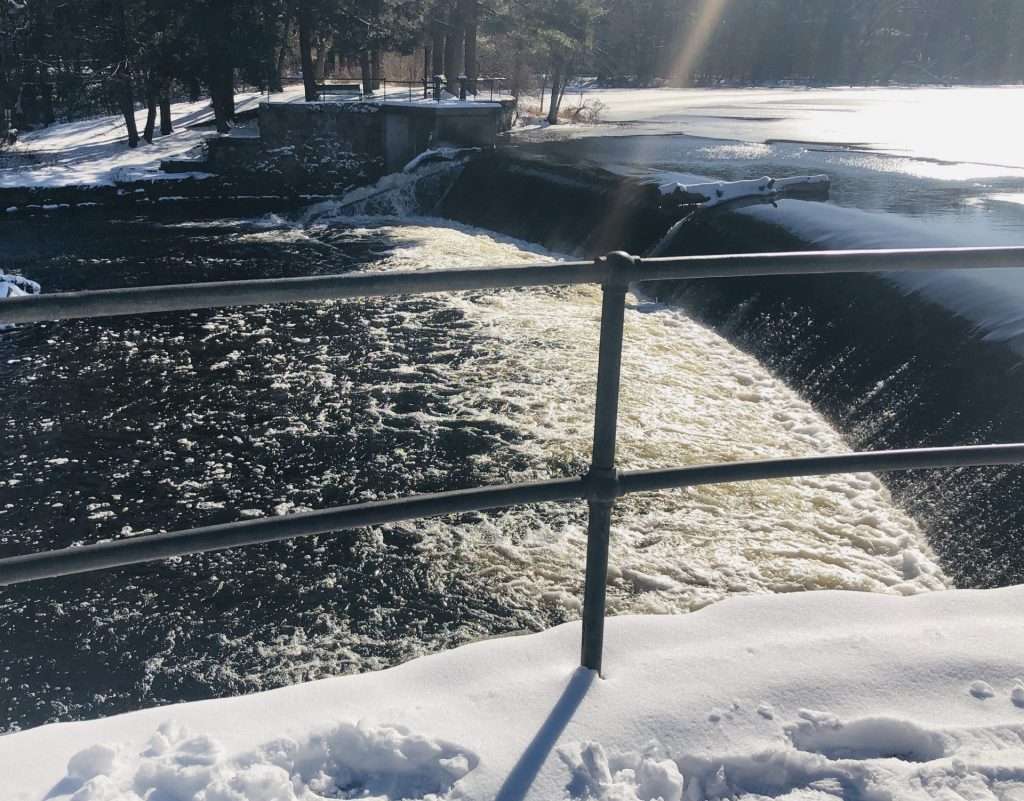 Chilly temps lured dozens of skaters onto frozen Dug Pond in Natick over the weekend.

Beginners, shuffling along with the aid of crates and support of parents, and more adept skaters flashing the uniforms of their favorite pro players and fancy moves with stick and puck, dotted the ice. Some were so talented they could skate along while checking their cellphones.

One skater leaving the ice after a couple of hours of refreshing exercise said she hopes the ice will hold long enough for some weekday skating, too. That’s one way to look at the bright side of some single digit temperatures in the forecast. 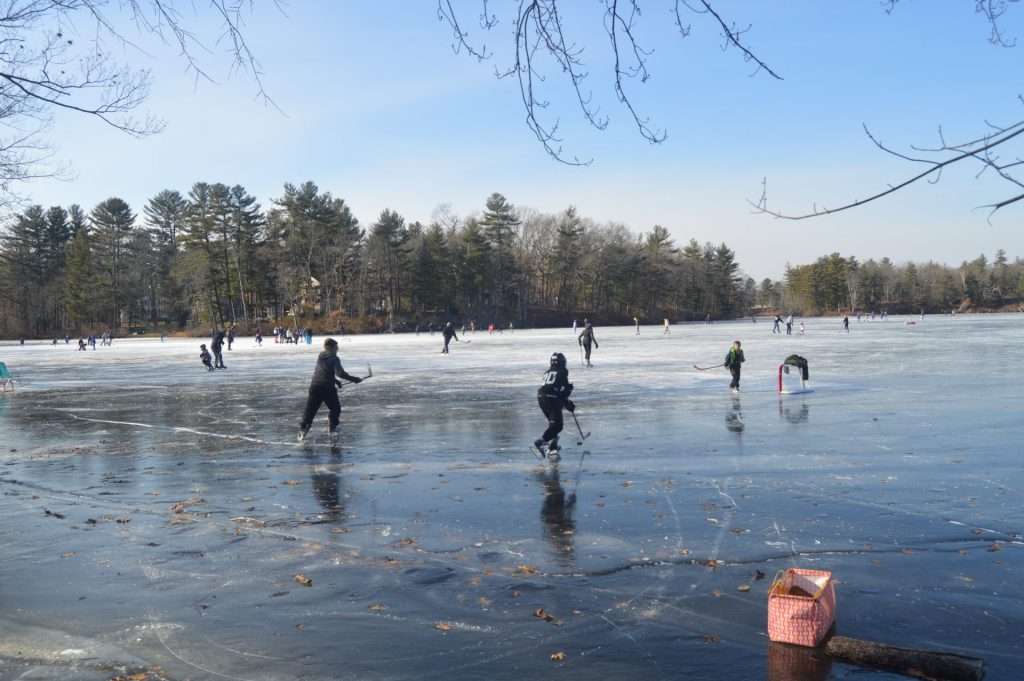