During his appearance at this week’s Select Board meeting, Natick Director of Public Health Jim White said despite the town’s COVID-19 numbers heading in the wrong direction, calculations showed that the town would likely remain at the “yellow” (aka, middle) level of the state’s color-coded rating system.

Sure enough, the weekly data released on Jan. 14 showed Natick dodging the dreaded “red” level, which in Natick’s case would mean 10 or more cases on average over the past 14 days per 100,000 residents and a 5% or greater positivity rate from those tested. Natick tallied a scary high 49.4 average cases per day, but a 4.69% positivity rate, the latter of which kept Natick out of the red (that percentage was up from 4.59% the previous week). Going back a couple of months ago, Natick’s positivity rate was well under 1%.

The Natick Health Department is powering ahead with vaccine dissemination, in partnership with Wayland, initially with 200 doses of Moderna vaccine for first responders. Who gets vaccines when is being dictated by the state, but vaccines are being dispensed locally or regionally. Natick and Wayland took a different approach to vaccinations than Wellesley, which staggered vaccinations across six clinics with first responders so that not too many were getting it, and possibly feeling side effects, at once. Natick and Wayland doled out 96 doses on its first day of its clinic, which White stressed was only for first responders and was pre-registration only. 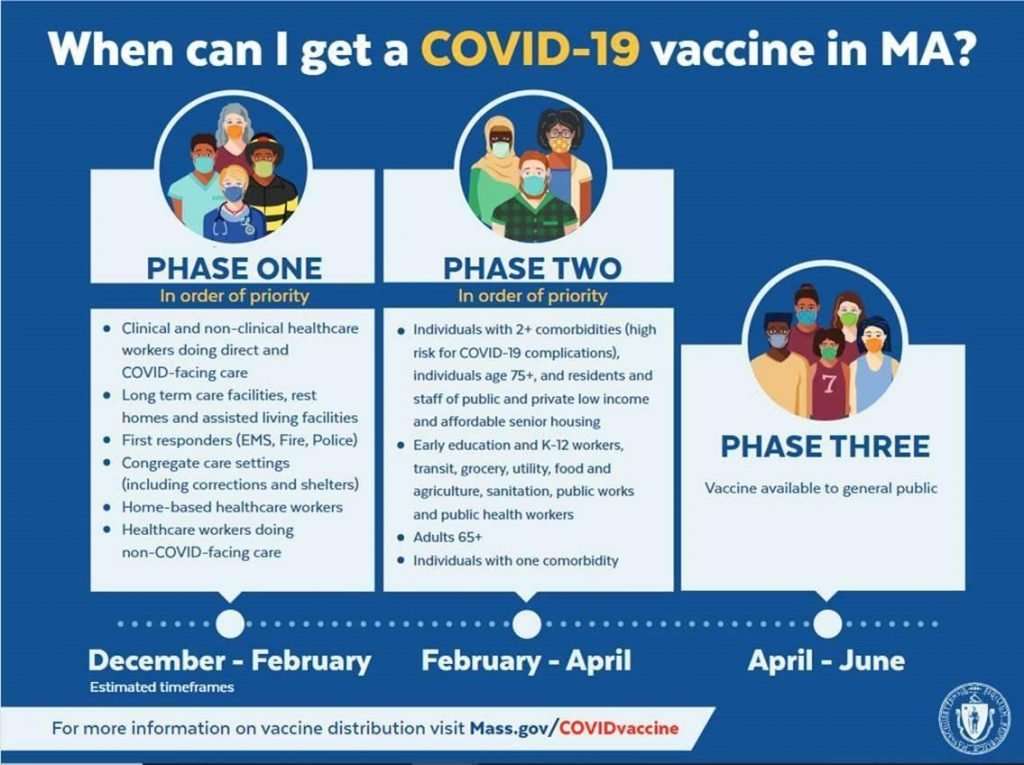 White said that the Natick Health Department has been approved to continue on with the vaccination program during the other phases of the state’s plan. “Some of the steps that are coming up are integrated with many different sectors, so we just need to make sure we are adhering to what the phases and the steps are, because as they say we can’t jump the line with anybody,” he said. “We’re going to continue to move on and do exactly what we’re told…”

More vaccines can’t come soon enough for Natick, which has seen a post-holiday COVID-19 case surge. “It’s been a little more than we expected,” White said.

Natick hit a high point (in a bad way) on Jan. 6 of 171 confirmed positive cases that were in isolation, and numbers started to wane over the weekend. Then they spiked again to 181 on Jan. 13, the day White gave his briefing. “It’s concerning to us when you look at what the metrics are as far as the state goes,” he said.

To put some of the current numbers in perspective, Natick didn’t hit its first 500 cases, from the start of the pandemic in March, until Oct. 1. Natick tallied 513 cases for November and December, and January is trending higher.

“We’re just holding out hope with the vaccination program going that we’re getting over the hump,  we’re hopefully getting past the surge of the holidays, and we’re hopefully starting to see things go down,” White said.

One way the Health Department, in conjunction with the police, tries to contain the spread of the virus is by investigating complaints related to alleged violations of state orders. The department has investigated over 700 such complaints since the start of the pandemic, White said. Cease-and-desist and violation orders, as well as fines, can result.

While much of the current vaccine and COVID-19 information is accessible via the Commonwealth’s Mass.gov website, getting White’s local insights are valuable. It would be great if the Health Department and Natick Pegasus would consider recording Health Department meetings, none of which have been posted since September. No meeting minutes since then either, though thankfully, you can find minutes from the Jan. 11 meeting on the Protect Natick’s Future site.