Natick’s town administration has begun making the rounds at boards and commissions to float a communications plan (embedded below) regarding what to do about the aging and iconic South Natick Dam on the Charles River.  By the end of the year, the town hopes to present a recommendation to the Select Board that could range from repairing the dam to removing it, the latter option one that could save the town money at least short term and thrill environmental groups.

As a “high hazard” dam, the town-owned structure could do some serious damage if unexpectedly breached. Recent state reports have shown the dam to be in “fair” condition.

“In some recent inspections it was determined that some deficiencies are coming to light with the dam structure itself. Nothing is imminent. There’s no harm or danger to public safety. But if we don’t address them they can in the long term become big issues,” said Deputy Town Administrator Jamie Errickson at the Feb. 24 Select Board meeting (about 2.5 hours into the meeting).

A Town Administrator-appointed advisory committee will be assembled in March. The process it undertakes will require input not just from environmental experts and town officials, but from residents who appreciate the beauty of the spot and those whose properties and homes could be affected by a decision to keep or remove the dam and spillway (aka waterfall). This means keeping town governments and residents in communities upstream and downstream in the loop, since what Natick decides could greatly impact those in Dover, Sherborn, and Wellesley at the very least.

Natick had been considering a $1.8 repair plan about a year ago, but put that on hold upon consideration of possibly removing the dam entirely. The structure has been in place since the 1930s at a time when dams were vital to supporting mills in the area.

The town early last year received positive news in that sediment samples from upstream and downstream of the dam proved non-concerning. Following that, according to the Natick town website, “The town received a grant from the Massachusetts Executive Office of Energy and Environmental Affairs to further evaluate the feasibility of breaching the dam and restoring the associated river channel. The Town has contracted with a consultant to complete this work and findings from this analysis should be available in July 2020.” Presumably, these findings will be revealed during the communications process, as they were not public as of the fall when we last checked and currently still do not appear to be available on the town website.

The town plans to step up public outreach in the spring, ranging from flyers to a webinar. Public input will be collected over the summer, and the advisory committee will then meet more regularly in an effort to get its recommendations to the Select Board in the October-November timeframe.

Don’t feel like you need to move up your 2021 or 2022 wedding to get pics at the dam, though. Even once the town makes a decision about the dam’s fate, it will still take a while to either fix the facility or dismantle it. 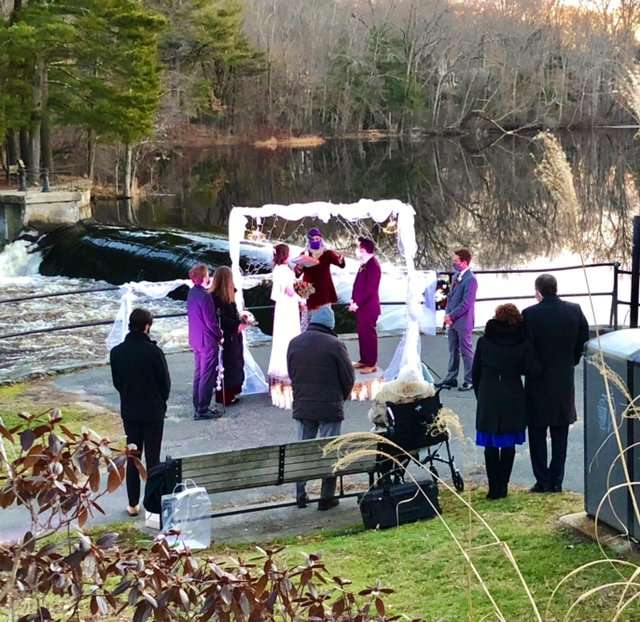 (Disclaimer: We live in the vicinity of the dam, so are watching this situation closely.)