When Natick Report broke the news this past summer that Natick Mall would become home to an inventive new entertainment and brewpub venue dubbed Level99, it generated early buzz that the galleria has lacked in recent years amidst traditional retailers filing for bankruptcy protection and clearing out.

We’ve been a little nervous to ask for an update in light of COVID-19 pandemic delays that have hit so many industries, but were pleased to learn that plans are still more or less on track for this venture in which the popular Night Shift Brewing outfit would join forces with Level99 to deliver what they’re calling “an entertainment, food, and beverage experience like none other.”

A big wall promotion can be seen on the upper level of the mall, next to Dave & Buster’s, in space formerly occupied by Sears. We even spotted a guy who looked both ways, then slipped through a sneaky door camouflaged in the wall. 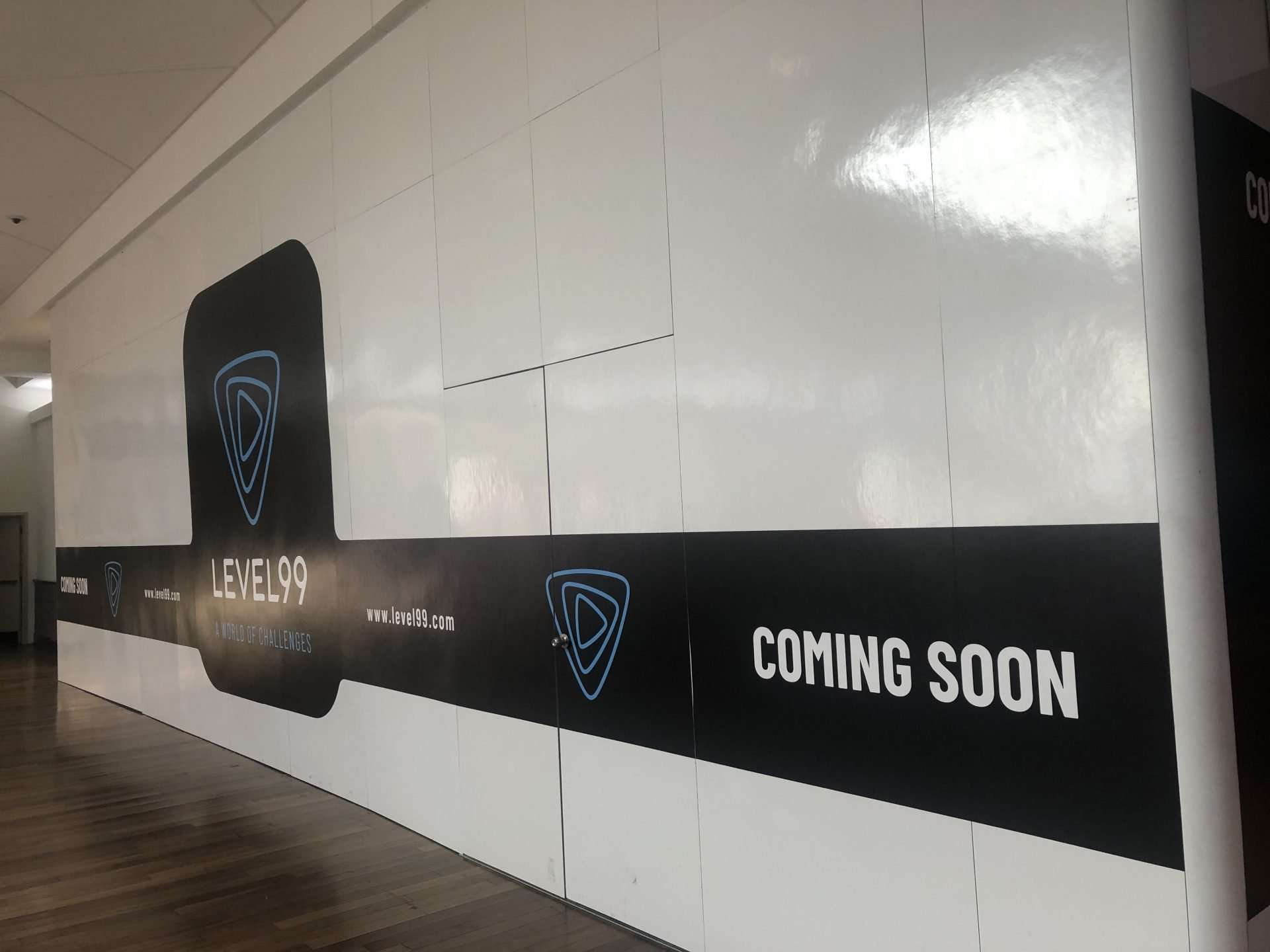 Level99 also has also gone live with the shell of a website with a pledge that it’s coming soon. “Until then, better start training—you will need mind & body at their peak to defeat all that we have in store for you,” we were informed upon joining Level99’s mailing list.

To refresh you about, or introduce you, to Level99, as we wrote in June the venture is spearheaded by DuPlessie, whose work through a company called 5 Wits you might be familiar with if you ever visited the now-defunct TOMB interactive space in the Fenway or the 20,000 Leagues or Espionage adventures at Patriot Place in Foxborough. Now DuPlessie & team, via engineering firm Box Fort of Norwood, are envisioning Level99 in 48,000 sq. ft. on the second level of the mall, which has been looking for non-apparel-based tenants for that space in re-imagining itself. Box Fort’s clients include museums and theme parks, to give you a sense of what you might be in for with Level99.

Level99 is a plan 4 years and $10 million in the making, DuPlessie told Natick’s Planning Board last year.

The concept would include 40-plus separate rooms, each clustered into small groups and featuring different games that groups of 2 to 6 people will have a few minutes to try to win. You might have to put black and white tiles together in a certain pattern, avoid stepping on “lava” as you solve a puzzle, or sequence colors and sounds, like with the old Simon game.

Some games will be more public, or arena-like, with the opportunity to compete vs. others or to just spectate. Seventy-plus pieces of art, including works from local artists, will decorate the space and double as items in a scavenger hunt.

The idea is that you’ll pay $20 for an RFID wristband that will give you access to the game rooms. In all, there’s about 30 hours of play available to people.

“We think the town of Natick is going to be a perfect fit for this entertainment concept, and the team is excited to bring something amazing and fresh to the mall,” DuPlessie says.

Level99 would expand the mall’s focus on such interactive venues to complement more traditional retailers. A trampoline park is separately in the works, though it’s arrival has been delayed due to the pandemic. In the meantime, Dave & Buster’s arcade-themed restaurant is up and running, and a new indoor airsoft rifle shooting gallery called Aim Point began operating in December.