I’ve been prepping for the arrival of Level99 and Night Shift for the past year, grinding through recordings of Natick Planning and Select Board meetings at which business executives and lawyers made their pitches about how unique, fun and safe this venture would be. So on one hand I felt like I knew what I’d be in for upon visiting Level99 for the first time this Monday an hour after it officially opened its doors. But I also suspected I might not have a clue.

Fortunately, I had Level99’s leader Matt DuPlessie on hand to give me a tour, not to mention more than a few clues to help us navigate a handful of the 43 game rooms, 7 arenas, and ubiquitous art scavenger hunt that fill this space.

DuPlessie is known for local endeavors such as the 5 Wits interactive adventures at Patriot Place in Foxborough as well as for his earlier engineering and project management work at Disney World’s Animal Kingdom Lodge. His Box Fort production company in Norwood has taken the lead in designing Level99, which gets its name from the highest possible game level to attain.

Given that DuPlessie was sporting his VIP wristband, we skipped the usual steps guests will take to check in and secure wristbands and a gamer name (e.g., attractive wizard) via a hallway of self-serve kiosks.  The wristbands wirelessly communicate with Level99’s game rooms and keep track of players’ progress, as you collect virtual coins and gems along the way that grant you more privileges as you scale the leader board. Level99 starts at $30 for 2 hours of play, with group pricing available. Corporate outings are seen as a key component to Level99’s ultimate success, as they would keep the space hopping during times of the week when friends and families would not necessarily be venturing out.

We strolled straight into the glowing and sparkling attraction, which can be accessed from inside the mall on the second floor or through a separate outdoor entrance. The 90-plus-seat Night Shift kitchen/taproom offers table service and has its own entrance for those who might only be eating or drinking, or visiting the Taproom before or after gaming at Level99. Its culinary pedigree comes from the team behind Branch Line, Shy Bird and Eastern Standard.

As this is still the venue’s soft opening, we had the place largely to ourselves, though Box Fort employees were scattered throughout putting final touches on this and that. One employee worked on a construction site-themed game room that’s designed to appear… under construction.

The rooms are divvied up by theme, such as apocalypse, pirates, magician, rainforest and mansion. We eased into things with what began as a simple sequencing challenge that involved hitting big wall buttons in a certain order. I was warned that things would have gotten more difficult in a hurry if we’d stayed much longer. I’ll refrain from giving too much away.

Once you enter a room, a timer starts, typically giving you no more than a few minutes to complete your tasks, and a screen shows your team’s progress. The computerized rooms take into account how many people are in your party to configure the challenges. As you’ll learn, some are easier to complete with more people, as you might benefit from spacing out across the room. With others, it’s helpful if there are fewer of you to get in the way of moving props and each other.

That was the case with the Ninja Dojo room, which thrust us into what felt like an action movie in which a rotating series of bars had us jumping and ducking to avoid setting off sensors. My much more agile teammates would have been better off if I sat that one out.

The rooms are designed for a wide range of abilities, and you can go back into rooms multiple times until you beat the challenge at hand. My height helped in one room where I only had to sky a few inches to smack a button near the room’s ceiling. You’ll benefit from having a mix of quick and strategic thinkers. More than half of the games and experiences at Level99 accommodate wheelchairs, and symbols at the entrance to each room indicate at a glance whether or not they are accessible.

“It’s all about discovery,” DuPlessie says. “Then it’s all about trying to improve your performance as you learn.”

For instance, in at least 1 room you fail if you step on the floor upon entry. You won’t make that mistake twice, unless maybe you’re on your second Night Shift.

I was a little worried about what the consequences of failure might have been in the challenge room dubbed Reactor Sludge, which involved climbing walls and hanging from monkey bars. We more confidently joined forces on Reactor Refuel to secure glowing reactor cores using a series of connected ropes.

Overall, there’s at least 30 hours of play across all of Level99’s 100-plus challenges. DuPlessie fully expects that more enthusiastic players will return over and over to master games and see their names rise on the leaderboards displayed around the venue.

For the bolder among you who don’t mind making spectacles of yourselves with the possibility of  becoming a crowd favorite, enter the arena games. DuPlessie deftly and patiently showed how this was done on the Axe Run, which looked like a villainous contraption out of the old Batman TV series.

All this in full view of the 140-seat beer hall, which boasts dozens of craft beer taps and a menu featuring appetizers (sticky chicken wings, lamb meatballs, etc.), Detroit-style pizza, salads, and more that DuPlessie assures are several cuts above what you might be used to at say, amusement parks.

“People don’t go to a place like Six Flags to eat,” DuPlessie said. “But they will here.” 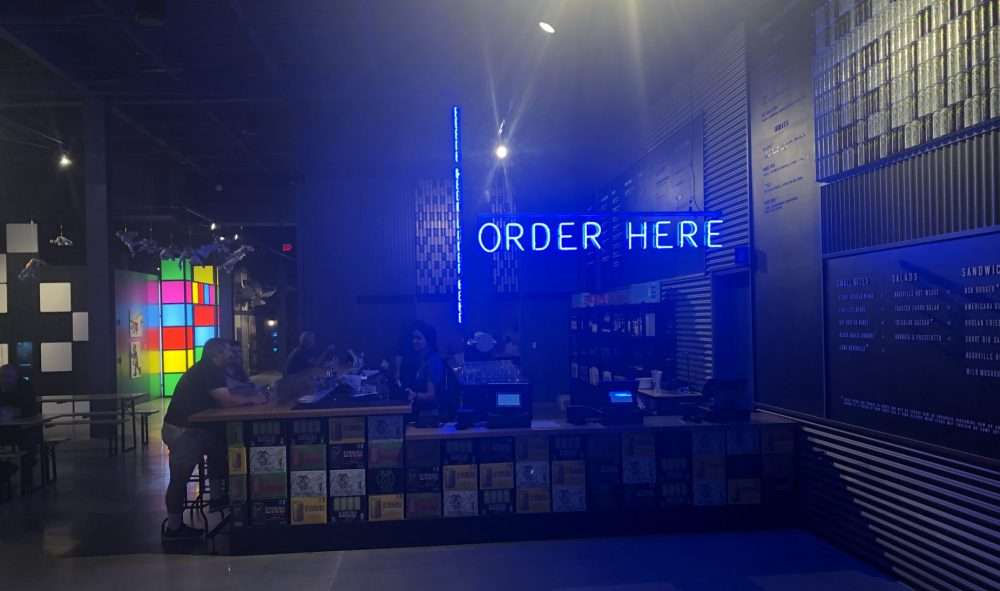 DuPlessie says more than a dozen Box Fort employees started dreaming up some 2,000 games 4 years ago, each concept starting on an 8×11 piece of paper, and graduating to more sophisticated iterations based upon further discussion and user testing.

Prompts included getting the team to come up with ideas based on certain themes, like games you loved to play as a kid. One of those has taken the form of a life-size balance board you stand on and move about to work a ball through a big maze.

“Some were inspired by other games, some were bolts of lightning,” DuPlessie said.

Those concepts were narrowed to the ones now at Level99. Because the venue is built in a modular fashion, there’s potential for less popular games to be phased out and new ones to emerge.

The games that have made the cut at Level99 are all doable, especially the more you play. You can earn hints as you go along to ease your way, and to qualify for cooler prizes than you might get at an arcade. We’re talking everything from fancy pretzels to t-shirts.

While many of the 2,000 or so games conceived haven’t made it to the Natick location, they could have more chances to see the neon light. DuPlessie’s not shy about referring to this first Level99 as the flagship site, indicating more are on the way if this succeeds.

Level99 is readying its online reservation system, but is initially all walk-in.

The venue is designed for adults, though kids under 18 are allowed when accompanied by someone 25 or older.

Those under 21 must leave by 10Pm on Fridays and Saturdays—when Level99 is open until midnight. Other days it is open from 11am-10pm.

While Level99 is perfectly designed for a night out with a date or multiple friends or family members, you could also fly solo and find fellow guests to partner with on games. Especially if you have a few gaming superpowers.

You’re also welcome to visit the beer hall and wander throughout, checking out the art and scene without actually playing any games.  If you do, you’ll notice some players examining the art very carefully. More than 60 installations from Boston-area artists adorn walls, the floor, and ceiling, and add up to a series of cheater-proof scavenger hunts.

The games seemingly never end here. And refreshingly, you won’t just be staring at screens.